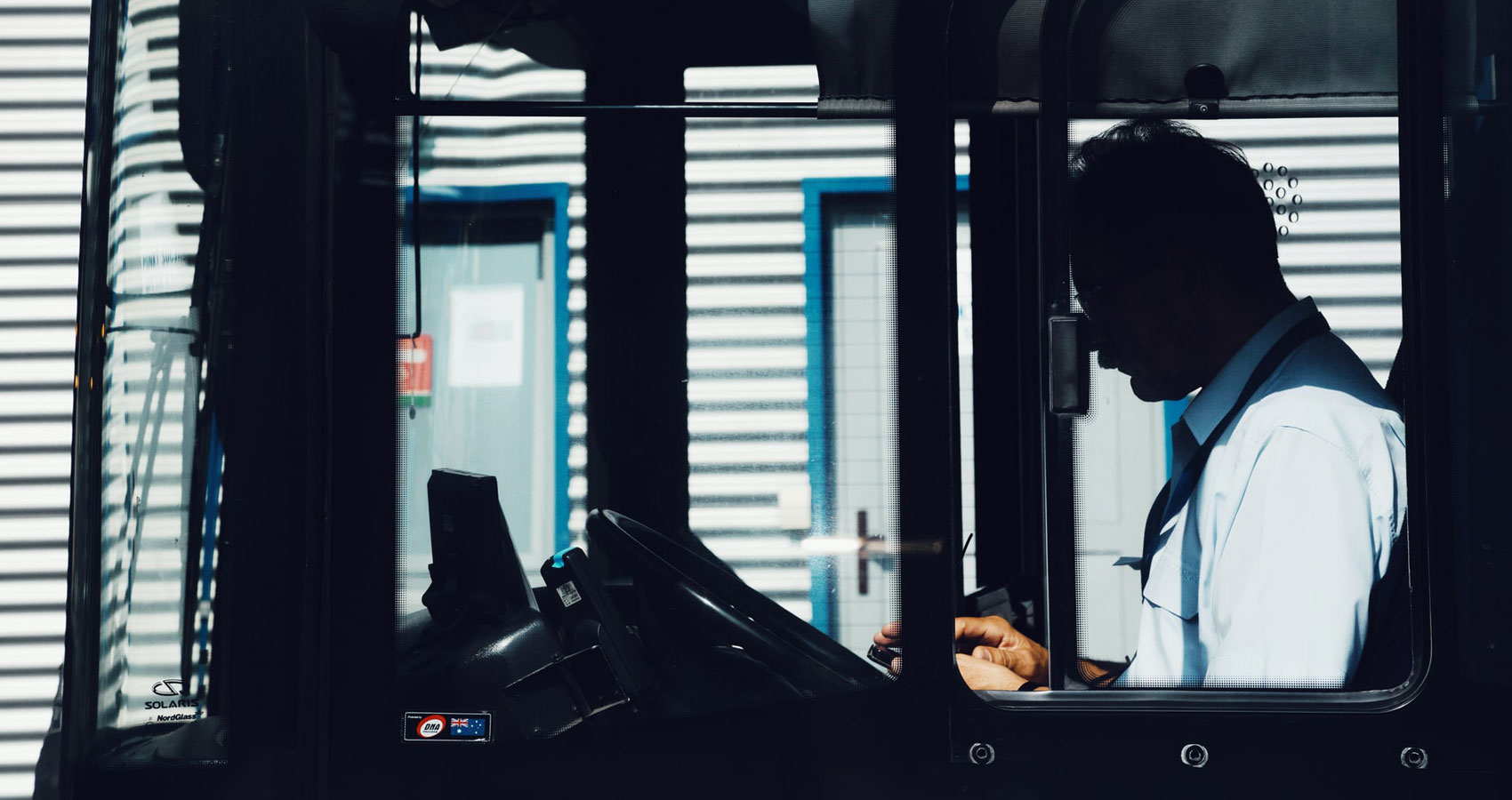 The bus rumbles under him like an irregular heartbeat. He reverses, watching the cyclone fence edge closer in the trembling rear vision mirror.
“Frank!” shouts the supervisor. “Remember we don’t want any more complaints about slamming on the brakes before people sit. Or you muttering when they enter the bus.”
Frank grinds at the gears. Changing from second to third could be like pushing a dislocated shoulder into place. He turns the bus towards where sun comes up. He hasn’t seen sunrises like that since Bali. Clouds tinged pink on the edges like coloured tips through hair. Bali had been his only overseas holiday. So brief and long ago he recalled few memories. Nearly hit by a bike. Spending two days vomiting after eating salad. Never managing chopsticks.
Roads lie almost empty. Headlights turn and shimmer in grey mist distance. On the main road he speeds up. At least these early high school students aren’t climbing on rowdily, shirts already out.
The first stop is empty of people. Take-a-way containers lie strewn. He accelerates past.
Ahead people walk out of the next stop. Steaming breath smudges air around them. One signals him energetically. “I can see you,” Frank wants to shout. ”Don’t need a retina transplant to notice you.”
Frank only glances at their faces. They hold travel cards over a screen, waiting for it to beep. He allows a few seconds for them to sit. With the school kids he used to lift the clutch abruptly so the bus surged ahead. They usually fell into each other squealing. It was his way of punishing them for their noise. Management told him to stop when the complaints started.
“He’ll kill someone,” a father said.
“He thinks he’s a stunt driver,” a teacher rang to say.
Bus driving was Frank’s last job choice. He’d previously maintained a general ledger, plus stamping and filing documents. The company then introduced a software called Number Thunder. Able to pay invoices, set budgets and forecast sales. At the start Frank helped introduce it, demonstrating how the software worked. Once the training was completed a manager came to his desk, asking Frank to accompany him.
“Sorry,” the manager said around a corner. He waited for someone to pass before speaking again. “Technology is hard isn’t it? Technology doesn’t have blood in its veins, doesn’t have mouths to feed, doesn’t pack up its desk as soon as it’s 5pm. And it replaces people. I’m sorry. Used to be those who poured petrol. Delivered milk. Ran along picking up garbage cans and emptying them. Collecting tram fares. You’re not the first person to have this happen.”
It was winter then. Clouds hung low so Frank couldn’t see the tops of church spires. He shoved hands into pockets where fingers touched loose threads. He drove home to Louise after collecting his redundancy payment. She stood outside, fanning smoke away from the barbecue. He asked if she remembered him saying not to light the barbecue in winter. That she’d only cook cobwebs.
“Sorry,” Louise said. The second time that’d been said to him that day. She’d wanted to surprise him. Sick of surprises, Frank nearly said. Wait until you hear mine.

Joggers thump through the mist. Frank pulls up at the next stop. When did office workers start this early? The more experienced drivers said not long ago all you picked up at that time were shift workers with nothing but taxis and garbage trucks on the road. But now the suits and dresses clamoured on. Commuters wore sleep deprived faces, as if shaken awake a few minutes ago. Frank felt the same. His senses dulled and possibly reaction time too. If a fox or cyclist crossed the foggy tunnels of headlights he wasn’t sure he’d miss them.
Frank was glad his parents couldn’t see him. His mother’s life spent back and forth between a vegetable patch and the kitchen. His father working six day weeks driving a battered tip truck with loads of top soil smelling like a track through rainforest. Across endless mixed grills they said everything we do is for your education and future. He imagined them now, opposite him again in those splitting cushion seats, knives and forks scraping and chiming on their plates. They’d ask what he did with his life and how he wasted the education they provided. And under their gaze he’d be a child again, avoiding the heat of their gaze, remaining silent through their disappointment and leaving the table as soon as he could.
He sat next to Louise that night. They hardly moved on the couch as the heater flared slow warmth. Louise sat with legs tucked under her, shoes discarded and lying on sides. He glanced sideways at her. She never looked back. Never smiled and tipped against his shoulder anymore. Television flicked dully, throwing shadows then light.
“Louise,” he finally said. He spoke quietly. His wife roused, looking up the way she did when sensing something wrong. Frank once told her she could smell sadness at a thousand metres. He took her hand in his. Kneaded her skin as if shaping clay, pressing thumbs into the hollows in her palm, the thin webbing between fingers and where her life line crossed skin. Later he undressed her, undoing buttons down her back while she held hair forward. Her skin revealed to him like a transcript of life: a faded suntan, pock mark of a mole surgically removed, then her arms he once danced with when it all started. Later what stayed in his mind was how rigid her body now felt in his arms.

The following week Frank begins a later shift. During morning mist thins. It floats in paddocks. Hovers in a layer like what can be seen when flying above clouds. He pulls up at the railway station, the fourth bus stop on his journey. A cluster of students in uniform approach the bus, talking loudly before breaking into laughter. Frank holds the clutch steadily in position while the engine hums dully through his feet.