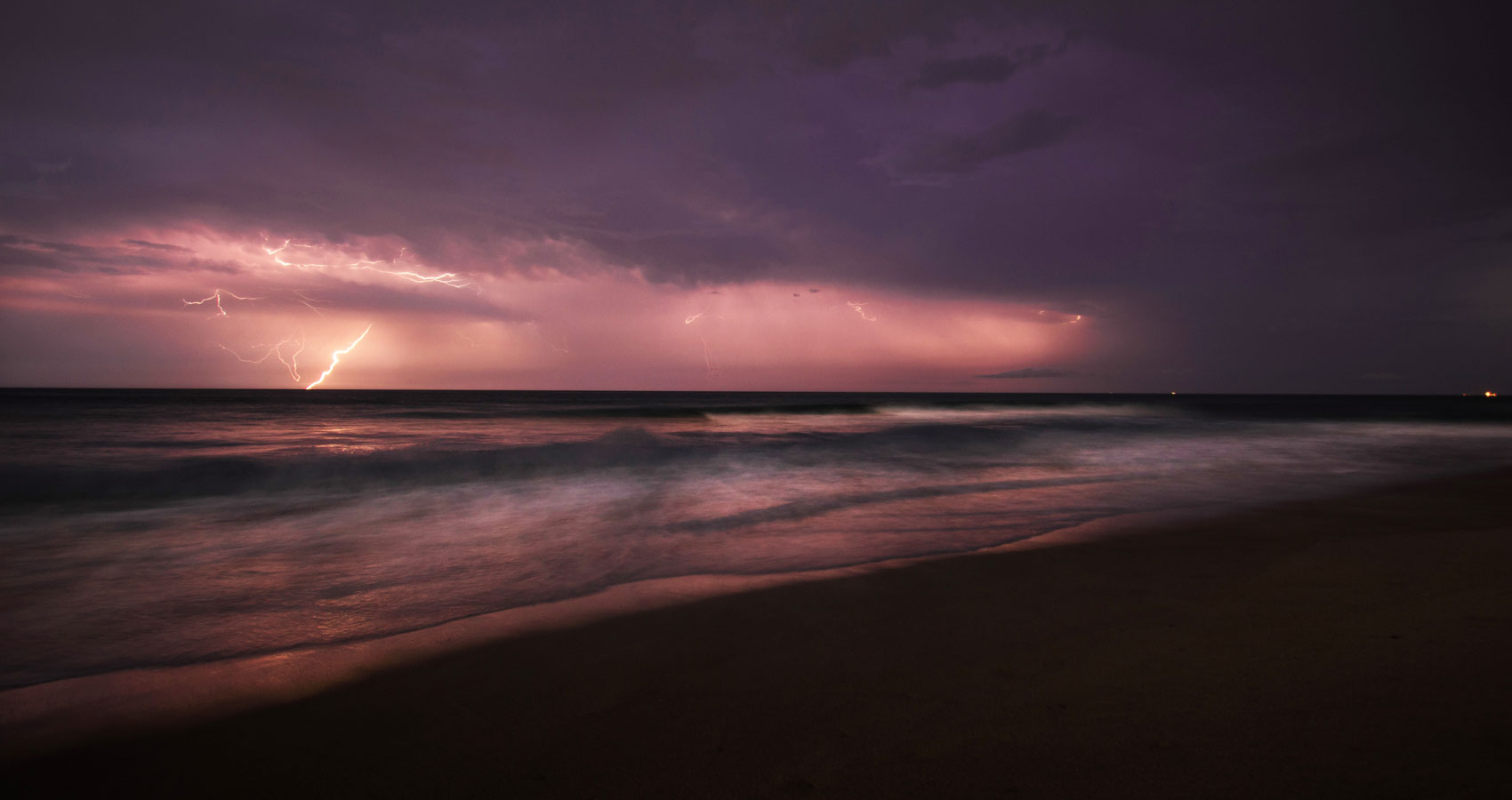 I don’t remember hearing the thunder. I felt it, swelling and buffeting close to me. Noticed skies, shades of grey and purple, colours streaking like healing bruises. Lay dazed on my back, seagrass wisping dryly over me. Waves broke behind where I lay, spray hazing over skin, numbing with cold. I couldn’t pinpoint the pain. Maybe it tremored in a hip. Scents of brine floated as if someone held smelling salts under my nose. I couldn’t move.
“Are you okay?” she said next to me. “Thought you were dead. My boyfriend’s calling an ambulance.” She bent down, gusting wind layering hair like bandages over her face.
I’d noticed it coming. The freshly turned earth smells, odour of downpours on steaming ground, rain angling, swishing through leaves and across bitumen roads radiating the day’s heat. Watched people rolling up towels, hunching and dashing towards cars. But I walked on, light dimming and clouds clumping by. Foaming darkness heaped like mountains over horizons. Later I recalled a crackle in air like breathing through bronchitis. The woman knelt next to me on the sand, taking my hand.
“You’re going to be fine,” she said and I searched her eyes.

The interior of the hospital reminded me of a whiteout. Bleached walls, cream sheets and pale complexions of ill people filled it.
“One in half a million,” the nurse said. “Those are the chances of being struck. About the same odds of my kids sleeping in on the weekend.”
They wheeled me outside. Felt the difference in air like changing into clothes already stretched to my shape. Oxygen now thin and weightless, not bending with humidity. We bumped over pavements cracking from tree roots. Cara hurried ahead of me, yanking open a car door. Hands gripped under my arms, hauling me up. Bodies strained and manoeuvred me into the car. The nurse hung in the opening.
“Couple of days rest and you’ll be fine. And let me know if you get any strange magical powers out of this,” she said.
We threaded along streets. At red lights the car engine trembled through seats. Said I was sorry for spoiling our holiday. No tang of white vinegar smells in our nostrils as we unwrapped fish and chips at the sea’s edge. No burnt orange sunsets as we reclined back in bars looking out over lucent water. No barefoot walks through sand patterned by tides under the shade of banksia trees. Cara concentrated on the road, asking how I was without looking at me. Told her a few aches and pains persisted.
We headed inland. Basalt plains crumbled and eroded behind fences. We drove roads, log trucks blustering past the opposite way. Nearing home grass tinged brown from early frosts. We fell silent before arriving.

Cara touched my hip. Felt her fingers barely on me, soft as exhaling. She said she’d never seen anything like those marks before. I glanced at where she touched, nails broken and uneven from her work. Spindly lines fanned out on my skin. Like tree roots Cara said. She tilted her head, examining me.
“I never knew lightning could do that,” she said.
“Let’s hope it’s true about not striking twice,” I replied.
I sat up, gazing outside. The window looked out to a plunging valley. At times winds came through like sirens, shearing through twisted trees. Moss furred their lengths of branches twitching in blizzards. I again told Cara I was sorry about the holiday. Shouldn’t have walked the beach before a storm. Was distracted. Stepping into someone’s footprints. Pretending to be a tracker. Seeing if the footprints led to a secret fishing spot or camping ground.
Cara switched on a laptop. I walked through the house. My joints ached, pain heavy and pooling. At the end of the hall I flicked on a light in the last room. One year ago we’d stood in there, mapping out where a crib could stand, discussing wallpaper Cara wanted to buy with leaping baby lambs and vintage prams. She’d gestured along a wall that caught rare sunshine in winter. Said wallpaper would look cute there. Perhaps if we put it up the right design it’d will a baby into our lives. By summer we both wanted to board the room up. But now Cara’s specimen jars stood on a shelf. She’d built it herself, hammering early one morning. The blows broke in me like heartbeats too big for my chest.
“If you hammer any harder you’re going to change the axis of the earth!” I’d called out to her.
“Lucky there’s no baby then!” Cara shouted angrily across rooms. “You wouldn’t cope with crying!”
An overhead fluorescent light ticked on. In each jar lay a small yellow body. Some curled up, brittle looking, legs folded. Yellow bands circled abdomens. I picked up the first jar. “Female European Wasp, (Vespula germanica), October 2021. Near Mansfield.” Cara’s meticulous writing printed across a label. ‘Scientist’s writing,’ I’d said when we still smiled at each other’s jokes. I held the jar above me, staring up into small wings and segments.

Winter had arrived abruptly. It usually did. Dinner Plains faced northwest, cool changes channelling in, snow dusting bush trails and car windscreens. My skin blemishes faded. But the aches worsened, serious enough for me to lie motionless, popped foil of painkillers strewn around. One night lightning jagged and rain pelted, setting off agony in my hips and back, as if joints conducted its surging electricity. Cara came in, her hand briefly touching where pain heaved. She watched me impassively.

I later woke when rolling over, splaying over cold sheets. Morning light was grey, holding mist and exhaust from tourist buses idling in town while people queued for coffee. Through windows mist slunk close to ground as if it might be too heavy to inhale. I stood, stretching through where pain ebbed. Called out to Cara, my voice humming along walls. The kitchen smelt of coffee grindings and burnt toast. I strode out into chilling air. Then circuited the house, slipping on frozen ground. Eventually I spotted her in a blue waterproof coat. I’d often seen Cara turning its pockets out onto a table, pebbles, lichen and leaves scattering. She’d stand back before fossicking through what she’d collected. I headed towards her.
“Discovered anything?” I called. “Don’t mean the remains of a woolly mammoth. More like how to save a marriage. Any fossils of that lying around?”
Cara looked around from a tree trunk. Faint green streaked down its column. Her breath turned and faded.
“Female wasps becoming more conditioned to the cold,” she said. “More of them this year. Tucked in crevasses. Under bark. Found one that’d crawled through a crack into a fence post. Imagine the ingenuity of that. One day this country will be populated entirely by invasive species. Foxes, carp, cane toads, rabbits.”
“Happiness,” I added. “That’s an invasive species around here.”
Cara glared at me before facing back to the tree. She gouged at it with a blade, bark shredding. She unscrewed a jar, picking up something with tweezers and dropping it inside.
“Wish you were as forensic about you and me with your research,” I said.
Cara’s hands wrenched as she cut into the tree, her body shuddering a split second later as if a delayed reaction. As I walked away I knew instinctively she’d turned, glancing after me as if checking whether I headed towards the house or taken one of the muddy pathways leading towards the bunched trees covering hills. I wanted to turn around and look back at her to see what was in her face at that moment and if it was something I could live with.

I returned to the house. Squalls of heat fanned from ducts. I strode the hallway to Cara’s room of specimen jars, snapping on light switches as I went so glaring light burst through the house. Taking down the first jar I shook it violently so the wasp inside pinged against glass. The insect careered around, as if alive and desperately trying to find a way out.