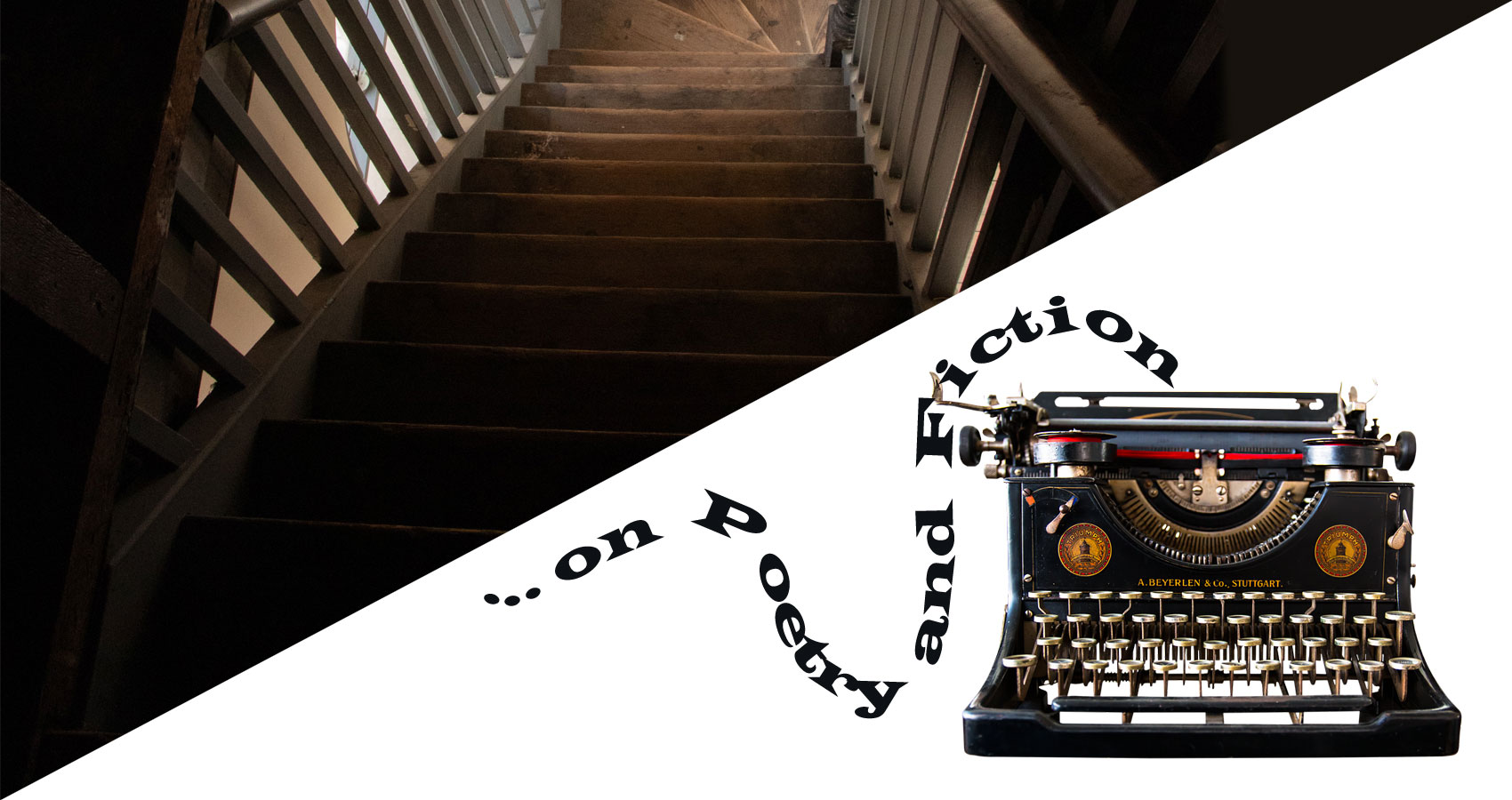 …On Poetry and Fiction Just “One Word” Away (“Voices”)

It was early morning and Rosalie sat curled up on one corner of the sofa as she anxiously awaited the visit from medium Jacqueline Price. She was happy, she was frightened, she was uncertain, she was grateful; she was one ball of emotion waiting to roll. On the other hand, Franco was calmly sipping a cup of espresso at the kitchen table while thumbing through the local newspaper. He periodically glanced over at Rosalie, studying her face and body language, telepathically communicating his apprehension. Rosalie could sense his thoughts as she caught a glimpse of him from the corner of her eye. She quickly turned away so Franco wouldn’t notice, and she regressed back into her own world of waiting. She clenched one of her throw pillows, the vintage-like tapestry one which always seemed to give her comfort and security in time of need, as she sat back listening for the doorbell…There it goes! The doorbell rang! Rosalie jumped from the sofa and yelled over to Franco to please go downstairs and answer the front door. Franco politely obliged, as he slowly wiped some coffee from his lips with a napkin, then walked downstairs. Rosalie kept her eyes fixed upon the apartment door with a nervous stare, not knowing what to expect, as she waited for medium Jacqueline Price to enter her home.

…To Rosalie’s surprise, Ms. Price elegantly and confidently followed Franco into the apartment, along with Maria, and an entire camera crew. Rosalie looked bewildered and unable to speak. She quickly gazed at Franco, then at Maria, for some answers. “A camera crew?” she thought to herself. Unfortunately, both Franco and Maria had puzzling looks on their faces as well. No one seemed to know what was happening at this point. Maria introduced Ms. Price to Rosalie, as Franco had briefly met her when he answered the front door a few minutes ago. Ms. Price presented her hand to Rosalie for a quick handshake, offered somewhat of a smile, then turned away and said nothing. Rosalie felt intimidated by Ms. Price since her strong presence took over the entire apartment.

Ms. Price was stunning although a bit older than Rosalie expected. She guessed early to mid-fifties maybe…She looked so much better in person than on television, and she was quite tall. Her long thick hair was jet black in color and it fell across her shoulders so perfectly. Rosalie couldn’t help notice her beautiful dark eyes as they remained wide open, alertly glancing around the apartment. She was quite slender and impeccably dressed in a form-fitting navy blue suit with a wonderful skirt that draped mid-calf, which was very well complemented by high-heeled, winter-white leather boots. Her strong perfume filled the air. Rosalie immediately recognized the scent. Japanese Cherry Blossom, one that Rosalie loved herself. That one thought relaxed Rosalie a bit as she felt they had something in common, in her own mind anyway. Ms. Price seemed very professional and very much in control, ordering the camera crew to follow her as she walked through the apartment, oblivious to the fact that Rosalie and Franco even lived there. She walked around like she owned the place, making Rosalie feel like she was a stranger in her own home. Suddenly, the scent of Japanese Cherry Blossom no longer comforted her.

Rosalie again glanced over at Franco, then at Maria, still looking for answers. Unfortunately, they both remained silent and confused, making Rosalie very uneasy. At this point, Rosalie mustered up enough courage to speak. She said, “Ms. Price. With all due respect, why is there a film crew in my apartment today? I wasn’t told about this.” Ms. Price, seemingly annoyed at the question, turned to Rosalie and responded, “My dear, this is my job. This is what I do. Whenever I am asked to do a walk-through or to investigate spiritual activity, I bring my film crew. Then we edit the material for my show. I am a very busy woman, but I am very good at what I do. You are lucky to have me here. Now do you want me to continue or not young lady? I rearranged my schedule to be here this morning as a favor to a colleague. My time is very valuable. Please do not waste it. Do you need my help dear? Do you want my help? If not, I will leave immediately…please, I need an answer one way or the other. I do not have all day. Time is money young lady.”

Rosalie was at a loss for words. She certainly did not want to broadcast her business to the entire world, exploiting her life and her privacy in the process, so Ms. Price can do her show. Rosalie looked over at Maria, who just shrugged her shoulders in disbelief, looking just as intimidated by Ms. Price as Rosalie was. It’s pretty rare for Maria to feel intimidated by anyone, so she was no help to Rosalie at this moment. Franco, on the other hand, came to the rescue. He politely addressed Ms. Price and said, “Ma’am, perhaps there was a misunderstanding here. We were seeking your special services in private. We did not expect to go public with this. There was no mention of this being televised. Now ma’am, Rosalie and I highly respect what you do and we would very much love to have you continue to help us today, but without the cameras. We are very private people and we are in desperate need of answers. We believe you may be able to provide those answers. Is there any way possible that you would do this for us privately? What would it cost? We’d be more than happy to compensate you for your valuable time ma’am.”

Ms. Price looked shocked, making Franco and Rosalie feel like they, the “little people”, had some nerve making this proposition to her – a very important person in the media world. She responded, “This is ridiculous! I have a show to do. Do you expect me to dismiss the camera crew now and work on my own? As I said, time is money my dears. If you allow me to continue with the camera crew, it will cost you nothing. Do you understand this?” Franco again reiterated that this was a private matter for him and Rosalie and that they’d be willing to pay her well for her services. Ms. Price, identifiably egotistical, allowed Franco to feed her ego with his ongoing praise about her spiritual ability as a renowned psychic medium…so Franco continued with more praise and more praise, until an uncomfortable silence settled about the room. No one spoke. Suddenly Ms. Price turned to Franco and Rosalie and said, “Very well then. Since I am already here I will treat this as a private consultation.” To everyone’s surprise, Ms. Price raised her hand to the camera crew and dismissed them with a snap of her fingers. It was amazing how she could command those around her with ease. Thankfully, it was Franco who found a way to Ms. Price’s heart – and that was through her ego. He played that up so well to Rosalie’s satisfaction. Rosalie was so proud of him as they have now retained the private services of Ms. Price.

Now it was just Franco, Rosalie, Maria and Ms. Jacqueline Price standing in the living room. Ms. Price commented that Rosalie and Franco’s apartment was so quaint, quiet and serene, adding that it was very peaceful here. She stood silently eyeing the apartment for a few more minutes then said, “Well then, please escort me to the cellar so I may get to work.” As Ms. Price followed Franco out of the apartment and down the stairs to the cellar door, with Rosalie and Maria right behind, she pretentiously said, “I charge by the hour. You will receive my bill in the mail.” Franco nodded and remained quiet as he continued down the stairs. Rosalie nudged Maria, however. They both childishly giggled at Ms. Price’s demeanor, as they imitated her to perfection behind her back, continuing to follow along, flanked by the sound of Ms. Price’s heels on the stairs and her scent of Japanese Cherry Blossom in the air.

…As they all stood in front of the cellar door, Rosalie’s knees buckled. She nervously took a few steps back, too frightened to move on. Ms. Price sensed Rosalie’s fear, and asked Rosalie if she preferred to remain behind while she and the others proceeded down to the cellar. Franco grabbed Rosalie’s arm, and held her tightly. He whispered into her ear that she could not back out now. She must go down the cellar with the group. She needed to see and hear firsthand what Ms. Price picked up, if anything, down that cellar. Rosalie nodded in agreement and motioned to Maria to stay close behind. Ms. Price placed her hand on the cellar door, turned the glass knob, then slowly made her way down the wooden staircase, with the others following behind. She asked that no one speak at this time. She did not want to be influenced by anyone as she attempted to pick up on any spiritual activity that may be going on down there. She asked that they all remain at the bottom of the wooden staircase and allow her to walk freely throughout the cellar.

This is an excerpt from my novel, a work of fiction (psychological/suspense), titled “Voices”. (Amazon) (Goodreads)