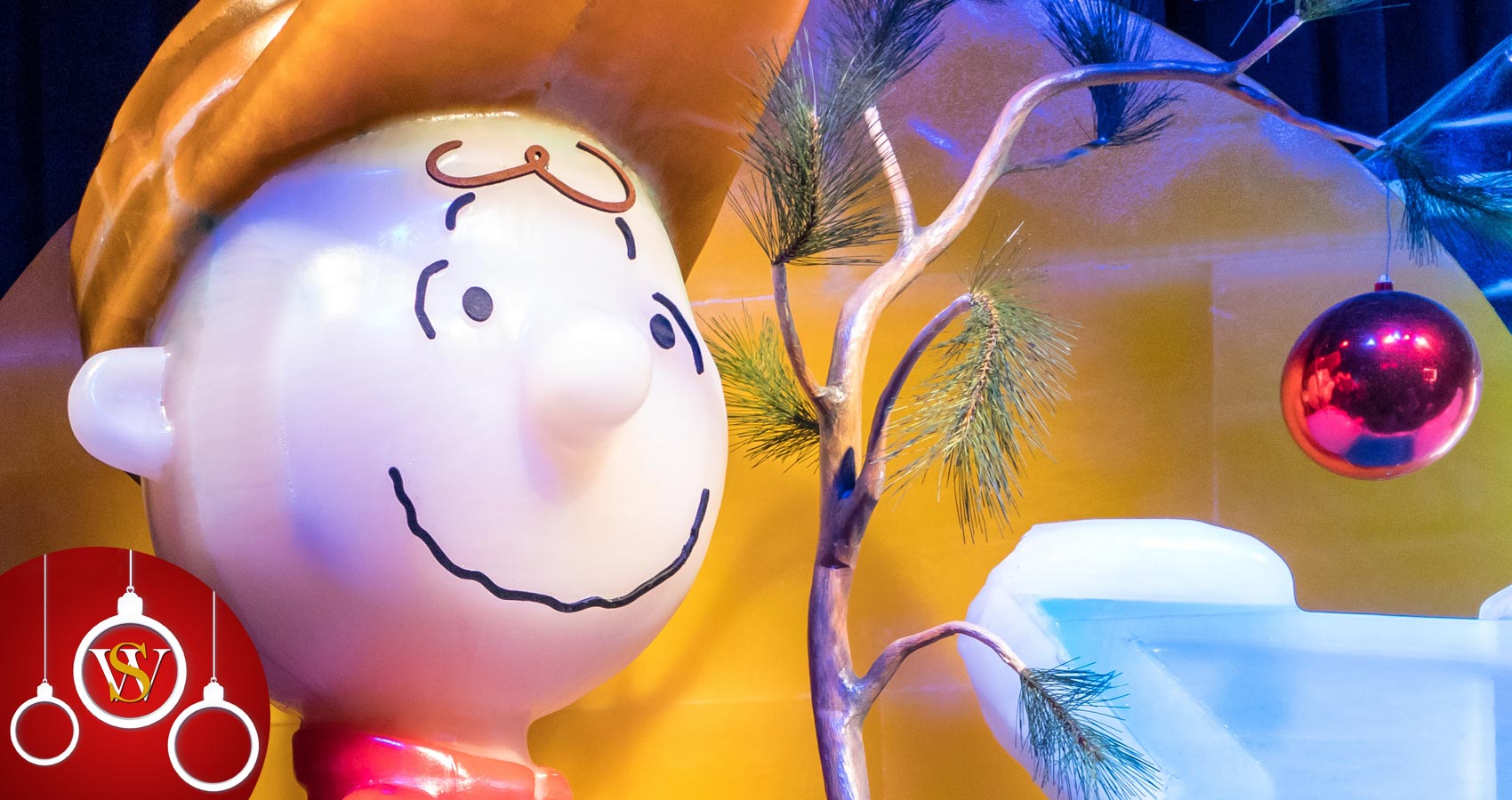 Why on earth did she do it?

I mean Peanuts were cool alright. But Good Grief… this was taking the Charlie Brown Christmas thing just a little too far.

Besides, it was stupid and damned embarrassing if you asked me.

But back in 1965, no one (especially adults) cared about what I thought about stuff anyway.

Yep, I think our neighbors must have thought my mother had finally lost it. After the divorce from the Old Man, she had been making one bad decision after the other.

And there it was for the whole world to see – parked right there on our front step – was a Holiday abomination trying to pass itself as a festive Christmas decoration.

It was an ugly tree with one large Christmas ornament on it. Actually to call it a tree was a misnomer. It was more like a sad-looking stick with a few pine needles glued to its surface. A couple of green pipe cleaners would have been more substantial than the sad excuse sitting on our front porch. And as I mentioned before, clinging to its branch was a large ornament, an oversized Christmas bulb that hung on like a man precariously dangling from a cliff, clinging on by the fingertips of one hand.

Mom had gotten the idea to put up the stupid ‘tree’ outside after we had watched A Charlie Brown Christmas on TV. She called it ‘The Unloved Tree,’ Matty and I called it somethin’ else and it wasn’t very nice.

Just looking at it gave one a sense of impending doom. You see even at my young age, I knew it would be only a matter of time before the taunts and teasing would come from my friends and classmates, not to mention the unsolicited horrified stares from our neighbors.

It didn’t take long before the razzing started at school.

I had just taken my first bite out of my peanut butter sandwich during lunch period when Chucky Brass said in a loud voice – “Hey Choo-Choo, what’s the deal with the crummy Christmas tree you have out in front of your house? Are your parents too cheap to buy a real tree this year?”

“No,” I said, swallowing my bite of sandwich with difficulty, “it’s just a decoration my Mom put outside for Christmas…and my name is Charlie…not ‘Choo-Choo.'”

“If that’s a decoration? It’s sure stupid lookin,'” said Chris Diavalo who suddenly appeared out of nowhere.

“Oh, God no. How did Chris DiAvalo get involved in this conversation?” I wondered. Pencil thin and with a rodent-like face, Chris was a notorious bully who was always accompanied by Alice, his enforcer, and one of my chief tormentors at Louise Van Meter grade school.

Three feet tall and built like a miniature linebacker for the Los Angeles Rams, Alice followed Chris around like an attack dog. Their friendship was totally weird as Chris’s parents were known to be extremely wealthy, while Alice on the other hand was a poor foster kid.

Alice usually wore a ski parka that was infant size and too small even for her. Underneath she wore a dress which I think had been pink at one time, but had morphed into a dirty beige sack through wear and repeated washings. With her lopsided bowl haircut, she looked like a miniature Moe of the Three Stooges. Yeah, Alice was one of the ugliest girls at Louise Van Meter and probably the meanest too. Rumor had it she used to beat up fifth and sixth graders just for fun at recess when she wasn’t shaking down the lower grade kids for lunch money.

“Yeah, it’s stupid,” said Alice cracking the knuckles of her oversized fist, “He’s lying…I bet that’s their real frickin’ tree for Christmas. Everyone knows him and his Mom are desty-tute.”

Don’t forget, he’s also got a skinny brother who looks like a skeleton,” added Chucky who immediately began fidgeting after Chris shot him a dirty look.

“Well, he does,” said Chucky backtracking.

Thinking that this would be a good time for me to split, I tried leaving as well but was roughly shoved back into my chair by Chris.

“Where do you think you’re going, Choo-Choo?” he said leaning in. “So c’mon…admit it…that’s your Christmas tree in front of your house, right?”

“What’s going on here, children?” said Mrs. Napier, our recess monitor coming up to our table.

“We was jest talkin,'” said Alice.

“Are Chris and Alice bothering you, Charles?”

I started to say something but caught Chris mouthing the words – “You’re dead Dickweed” so I just shook my head no.

“I think we should give Charles some space to eat his lunch. Why don’t you two go outside and play?” said Mrs. Napier, giving my tormentors the stink eye.

Behind Mrs. Napier’s back, Alice made a cut-throat gesture at me before turning and following Chris.

“Well, Charles you can finish your lunch now…that is if you can still eat that sandwich?”

Looking down I saw my hands covered in sticky peanut butter, while the remainder of my sandwich was tied into a knot.

Getting up I waved off Mrs. Napier’s offer of some ‘healthy’ carrot sticks and went and hid in the Boys Bathroom where I indulged myself with impotent fantasies that would never bear fruition.

After the final bell rang for school, I snuck out of the bathroom stall I had been hiding in and headed home on my Stingray bicycle. I wanted to put as much distance between me and my latest humiliation as fast as possible.

My short legs pedaled furiously as I rode home. The playing card mounted on the spokes of my bike tire made a clack, clack, clack sound that seemed to punctuate my angry thoughts.

I hated my parents for getting divorced.

And I especially HATED that stupid GODDAMN TREE my Mother had put outside our house!

Arriving home, I threw my bike down on the grass, took a few steps up to our front porch, and then savagely kicked the focus of my anger as hard as I could. The sound of the Unloved Tree hitting the concrete steps made a loud crashing noise.

In an instant, my Mom flung open our front door to see what the commotion was and to make sure I was okay.

Her face crumbled when she saw what I had done to her Christmas decoration that she had so lovingly placed out in front of our home.

“Oh, Charlie…not the tree,” she wept, as she bent over to pick up the shattered ruin.

Watching her tenderly pick up the broken limbs and the pieces of the shattered bulb, I was overcome with feelings of sadness and shame.

Later when I was much older I finally understood what the Unloved Tree had meant to my Mother.

She had seen herself as the tree and it had been a cry for help.

A cry that was tragically ignored until it was far too late.