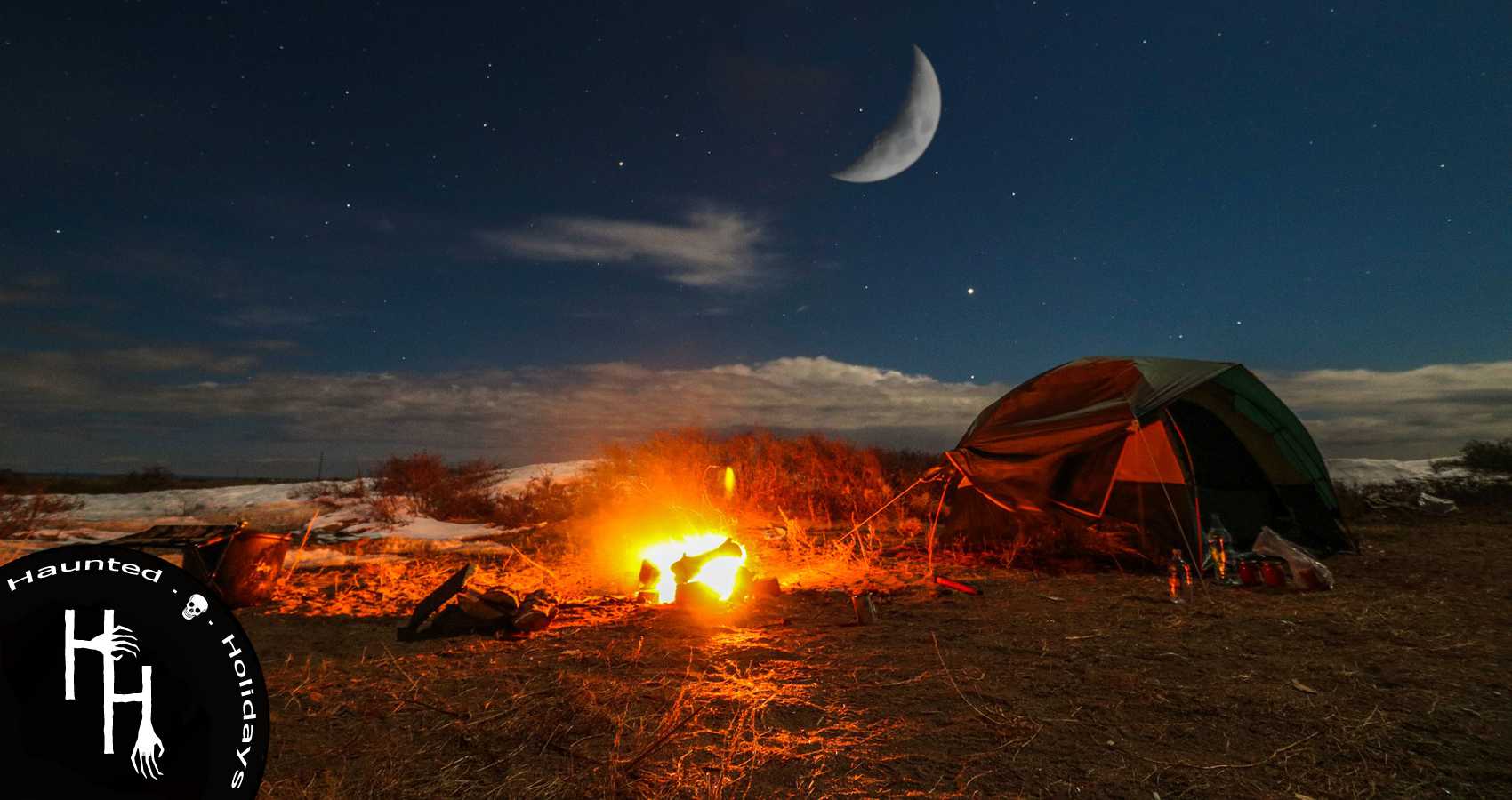 Jill blinked awake as light shined on her from the sliver of moon above her in the sky. With Christmas only three weeks away, she’d decided to go camping, taking advantage of the mild temperatures before the next cold front. She rolled onto her stomach but felt something pressing into her, and shifted to her side. When she still felt whatever-it-was poking her hip, she changed position again. Finally comfortable, she dozed off.
Something icy touched the middle of her back, and she shrieked. Sitting up in her sleeping bag, she looked around wildly. Clouds obscured the moon, but she could see well enough to know nothing was nearby. Brain fuzzy, she yawned widely and assumed she’d been dreaming. She didn’t know why, but something felt wrong. Off.
Then it hit Jill. She’d gone to sleep mere inches from her tent, but saw it a couple hundred feet away, right where she’d set it up.
A faint scraping noise behind her made her flinch, and she whirled around.
Santa sat a few feet away in traditional Christmas attire, scratching his large belly. But the resemblance to the joyful Saint Nick ended there.
His face wasn’t jolly, but a twisted, leering parody with glowing-black eyes, and skin that looked like raw hamburger meat.
Breath catching in her throat, Jill’s heart pounded. This had to be a dream. She pinched her leg, but Scary Santa was still there. His beard moved, and she grimaced, realizing white worms hung from his chin, twisting in all directions.
The nightmare Santa wheezed, its mouth curving into a horrifying grin.
Jill scrambled to her feet, planning to dash to her car, but lost her balance as the ground beneath her shifted. Glancing down, she froze, not believing her eyes.
Bones littered the ground. Some moved, inching their way toward others, connecting into feet, legs…
A complete skeleton soon stood close to her.
Jill turned to run, but discovered other skeletons had formed behind her, barring her way.
One pointed a bony finger, tipped with a long black fingernail, at her. Before she could react, it slashed her arm with the nail, tearing off a strip of her skin and bringing tears to her eyes. The skeleton raised the piece to its mouth, licking it before devouring it whole.
Another lunged forward and yanked a clump of hair from her head, making her cry out in pain. She gingerly touched the spot, whimpering when her fingers came away red. The skeleton tossed the clump to Santa, who sucked on the bloodied ends.
Chest tightening, Jill felt sheer panic racing through her, and struggled to think of a way out. Her breath came faster and faster; she was panting within seconds.
She yelled for help when Santa stood, shuffling closer, and the skeletons advanced.
She wailed as they roughly snatched hair from her head. Her wails turned into hysterical screams when they tore skin from her arms, then chunks of flesh.
Soon, all that remained of Jill were drops of blood and an empty tent.

Gabriella Balcom lives in Texas with her family, works full-time in the mental health field, and has loved reading and writing her entire life. She writes fantasy, horror, sci-fi, romance, literary fiction, children's stories, and more, and loves great stories, forests, mountains, and back roads. She has a weakness for lasagna, garlic bread, tacos, cheese, and chocolate, but not necessarily in that order, and adores Chinese, Italian, and Mexican food. Gabriella has had 360 works accepted for publication, and won the right to have a novel published by Clarendon House Publications when one of her short stories was voted best in the anthology in which it appeared. Her book, On the Wings of Ideas, came out afterward. She was nominated for the Washington Science Fiction Association’s Small Press Award, and won second place in JayZoMon/Dark Myth Company’s 2020 Open Contract Challenge. Gabriella's novelette, Worth Waiting For, was then released. She self-published a novelette, Free’s Tale: No Home at Christmas-time, and Black Hare Press published her sci-fi novella, The Return, in 2021. Her horror novella, Down With the Sickness and Other Chilling Tales comes out in November of 2022, and four others pend publication.