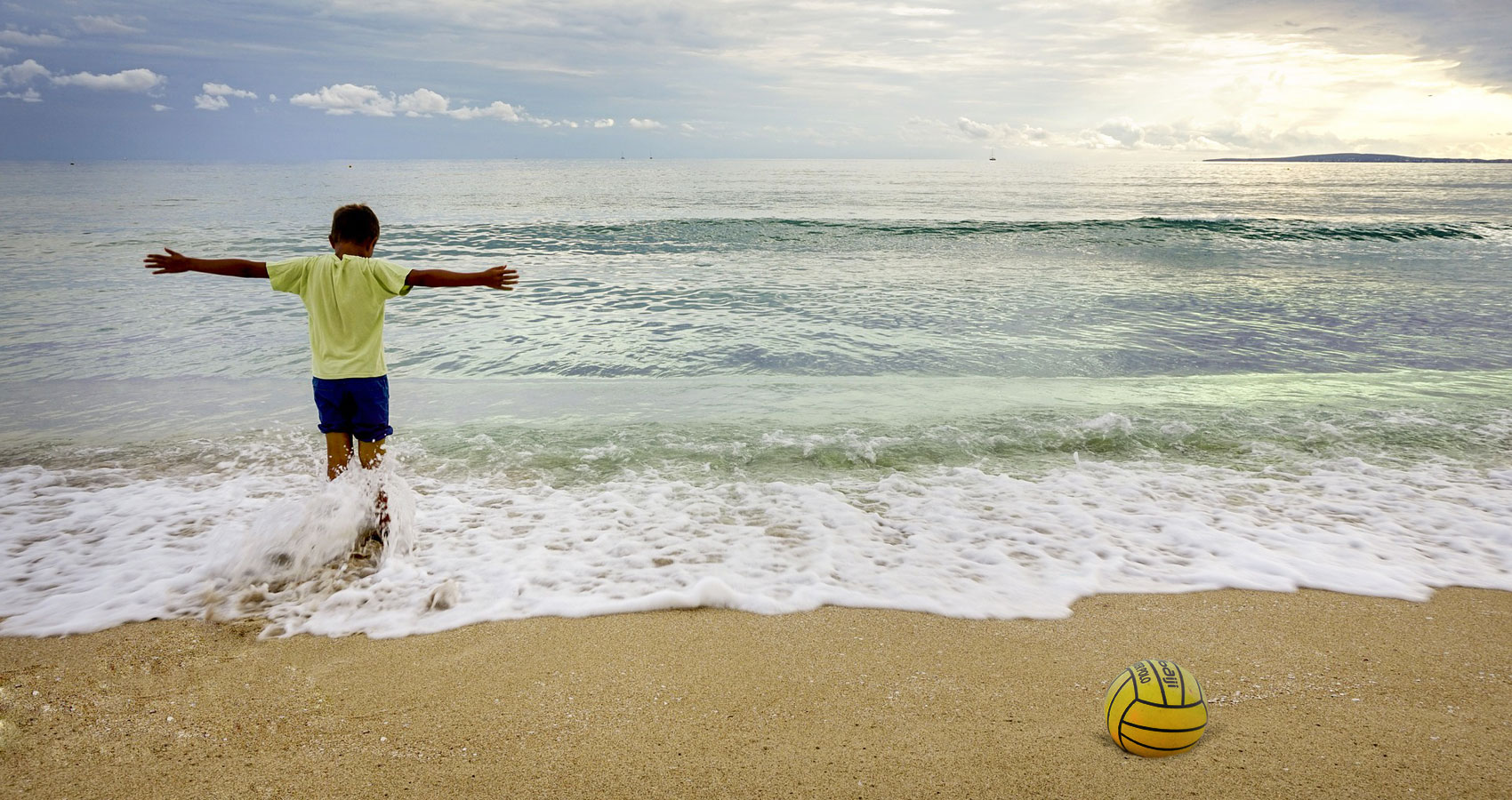 Later in the morning, soon after he had been administered with his usual dose of morphine, James would quickly slip into a dreamy state and snooze for hours.
On this day he dreamed of a time when he was a young boy in his faraway coastal hometown. He was with Brian on the long white Fisher’s Beach, the sun shimmering off the rippling ocean. Brian had brought with him a bright, round yellow ball. There was absolutely no need for meaningless discussion. The boys almost instantly began to kick the ball to each other as they ran along the hard sand.
They played for hours, with a seemingly endless abundance of energy and stamina, and when the sun was close to the horizon they sat down to rest in the dunes.
“You’re a very good soccer player,” James said.
“It’s football, not soccer,” Brian corrected, “that’s what my dad said. My dad could have played for England but he broke his leg really bad.”
“That’s terrible bad luck. I feel very sorry for him.”
“It didn’t really worry him,” Brian said, “he told me that things like that just happen and there’s always another day tomorrow, whatever happens. He said you should always leave your worries behind.”
James nodded thoughtfully. He looked towards the ocean, digging his hand into the cool sand. He was wondering why all things must come to an end.
“I have to go now,” he said.
A light smile appeared on Brian’s lips.
“Alright then, if you have to. I’ll see you later.”
James stood up and walked across the dunes and up to the start of the bitumen road. He turned his head as he strolled to see the small figure of Brian, still sitting in the dunes.

When he awoke James saw he had company. Susan was occupying the guest chair beside his bed. She presented him with a forced smile.
“How are you feeling today, James?”
James cleared his throat before replying. It gave him the opportunity to adjust his eyes to the bright lighting, and briefly study his younger sister’s pale face and her slightly anxious expression.
“I’m alright. I’m not in any pain,” he explained, for he knew she was sure to ask that familiar question. “The drugs take away all the pain.”
“That’s very good,” Susan said gently.
James chuckled to himself.
“I’m ruled by Morpheus, the god of sleep.”
Realising that the irony would be lost on Susan, he momentarily closed his eyes. He heard the steady outside rain tap against the small window pane of the room that had been his home for longer than he cared to remember.
“I was dreaming about a boy called Brian,” he whispered, “I think his name was Brian Marsh. Do you remember him?”
“What? The boy who died?”
“Yes… the one who passed away when we were kids.”
“The doctors say they are very happy with your progress,” Susan quickly responded. “There’s every chance you could be released in a few months’ time, maybe even sooner.”
She went on to tell him how he would be able to return home, how his house had been securely locked up during his absence, how the neighbours were looking after his garden; how ‘everything’ would ‘all still be there’ for him.
James hadn’t failed to notice how his sister had quickly changed the subject when the unpleasant topic of ‘death’ had been mentioned. He tried not to let her formality annoy him. Instead, he asked after Susan’s children, his niece and nephew, what they were currently doing, if they would ‘pop in sometime’.
Pop in… He didn’t blame them for not wanting to come. If he was their age he would feel the same reluctance to visit an older sick person in hospital.
Susan made the usual excuses for them and when a nurse arrived with James’ afternoon tea she could then excuse herself and leave him to dine alone, as was his custom.

“Let’s play another game of football,” Brian suggested.
A stiff southerly breeze blew across the white expanse of sand. It ruffled their hair and summer shirts and shorts. Brian kicked the ball towards him, and instead of trapping it with his feet, James firmly headed it back as hard as he could manage. They began to run along the unyielding sand, constantly foot-passing the ball to each other. The game continued for what seemed like hours.
“I love football!” Brian yelled to his companion. “I used to swim a lot but now I just play football.”
“It’s fun!” James said.
“That was a good header you did before!” Brian exclaimed, “You’re a good player, too.”
With that congratulation, James smiled to himself.
“I’m playing for Liverpool today!” he shouted.
“I’m playing for Manchester!” Brian retorted.
“United, or City?”
“United, of course!”
At that moment a gust of wind blew a spray of sand into James’ mouth and he began to choke.
“Are you okay?” Brian asked.
James coughed and spat on the beach. He sat down. Brian went to retrieve the ball and then returned to sit beside him. James repeatedly wiped his mouth. The sand stung his tongue like the bitter taste of morphine.
“I like playing this game,” he said, “but I’ve got to get going now.”
“Do you have to?” Brian asked.
“Yes. I don’t want to, but I have to.”

“How are…”
“I’m fine!” James angrily interrupted his sister. Instantly, he released a deep sigh. “I’m sorry,” he said, with genuine contrition, “sometimes, this is not where I want to be…”
He wanted to tell her that death comes in many guises. He felt if he could have spoken the truth to his sister–he wished he could have but she didn’t seem capable of accepting his truth, he would have wondered aloud about his strong, overpowering feeling that this current reality he found himself in was merely transient. Another reality was out there somewhere, holding its breath under the breaking waves of the ocean; sheltering in dunes from the loving warmth of the nourishing sun. It was waiting for him, for him alone.
But instead of speaking about these things, he looked around at the stark white walls that surrounded him.
“I’ve had four operations in the last six months,” he said. “I want to be the person I used to be.”
“I know,” Susan said reassuringly, noticeably lowering her head in the process. “Remember, James…, we care about you. You are family and you’re very important to all of us. You will get better, I know it.”
Even though she wasn’t physically touching him, he felt a sensation that she had grabbed his hand tightly and would not release him from her grasp. James turned away. He wanted to be released from his sister’s protective clasp, but he didn’t know how to make such a plea for freedom without being the bearer of more hurt.
Outside, the rain tumbled down. It continued to tap on the window like an impatient witness to the silence that dominated the room. James finally posed a question.
“How did that boy die? All these drugs make it hard to remember.”
“Which boy?”
“You know, the one we knew when we were kids… the English boy, Brian.”
“I’m not sure… Why are you asking me this?” Her tone had taken on a touch of exasperation. “Did you dream about him again?”
“Yes. I did.”
James didn’t tell Susan how he dreamt about Brian every mid-morning to late afternoon and how their game in his dreams had quickly become the highlight of his day. Lately his calf muscles felt sore and his hamstrings tight, as if he really had been playing football on a country beach.
“I’m not completely sure,” Susan said. By her pained expression of concentration it seemed to James as if she had resigned herself to do his bidding and was searching her memory for an appropriate answer. After a time, she said, “I think he may have drowned.”
“Drowned…., he drowned? Are you sure?” James looked into her eyes. They reminded him of his late mother’s eyes, so patiently blue.
“Yes,” she said. “I remember now. He drowned at Fisher’s Beach, James. He was only nine.” Her eyes were noticeably tearful. “You’re still young as well. It’s so unfair… you’re only fifty-five.”

The air was completely still with none of the wind of the day before. They ran and kicked the yellow ball as they did every day. The hours passed by until the sun threatened to fall beyond the horizon and bring to an end their afternoon play.
James stood and watched the larger yellow ball’s brilliant fire in low-flying clouds.
Brian stood beside him.
“It’s beautiful, isn’t it?” Brian said. “It hardly ever rains here. The only water is in the ocean.”
James silently nodded.
“Are you going now?” Brian asked.
“I guess I should be.”
James moved to start towards the road, then hesitated.
“You could stay,” said Brian, “if you want to…” He grinned, mischievously. “They’ll be another day tomorrow.”
James looked around him. He took in the rhythmic slapping of the ocean waves on the majestic beach, the stretch of seemingly never-ending sand, the darkening, light blue sky. The landscape required a decision.
“Yes,” he finally said, “I think I will stay.”

“It’s always best for the family when they leave quickly,” the young nurse had said, “quickly, with as little pain as possible.”
To Susan, the girl seemed far too young to be imparting such advice. It was her soft eyes that showed her humane sincerity. She must have witnessed many deaths, Susan pondered.
Susan sat beside her brother in the guest chair. She had sent her children home before her, telling them that she wanted some ‘quiet time’ with James before they took his body away. Her eyes were now dry, and she saw how peaceful he looked in his final state.
The steady outside rain of the last few days had given way to grey clouds with a splattering of sunshine. A streak of light now pierced its way through the small hospital room window, brightening the dull wall. For some reason she would never know, it reminded her of the days when they were children playing on Fisher’s Beach.