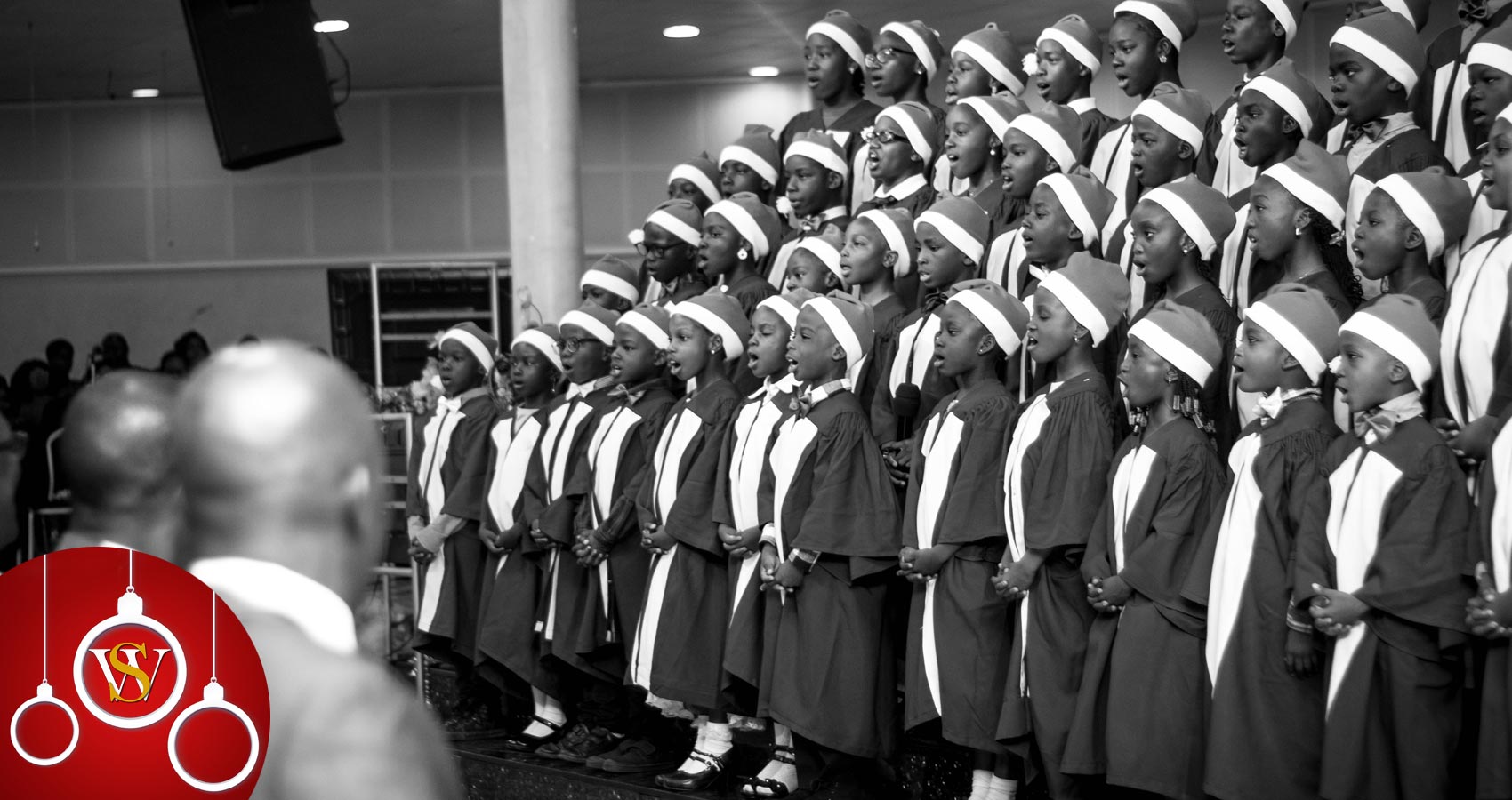 Posters and flyers were everywhere.

There was a din between classes that Friday, louder than usual. More like a bray, a bellow, a bluster. Like two hundred forty–three Christmas Carols being hummed simultaneously, all off-key, more forte than fitting the hallways mid-morning.

Handing out pink slips to the most egregious offenders and shushes to those less arrant, the Nuns found it hard to hide their shared mirth. Shushes quite tricky when stifling grins.

A sea of Christmas Cards seemed to stream between classrooms.

Godfrey was sure his name would help. “I’m half–way there,” he reasoned, with G–o–d plainly smack–dab up–front. And looking down at the gold and green plaid bedecking his tie, the crimson red vest his best friend had gifted him, there was little, in his mind, standing in the way.

The part of Joseph of Nazareth was clearly his to lose.

Even his third–grade teacher, Mrs. Lark, had earlier reinforced such brazen optimism.

“That is a very smart tie, Mr. Godfrey,” she noted in the school yard, “I hope you’re trying out for the Pageant this year,” she added, her berry hand on his shoulder.

Not hearing any the ALSO kind words to ALL the children under her wing, his confidence soared.

It was a small Orphanage. An adjunct, a mixing in with the St. Bernadette Parish School. He and Stephen, his best friend, had been there the longest, since before they could remember.

Stephen had found his forever–family that Summer. From all the North Carolina postcards he sent, with beach and dogs and sky and love, was everything a boy could want. Godfrey was thrilled for his friend, as happy as if it were him, if not for the fact that he missed him so horribly.

“I remember you liked this vest,” Stephen wrote in the card delivered with his birthday gift. “My new Mom gave me lots of stamps. Not enough for an airplane to fly you here. So I send you this instead. Love, Stephen.”

Precocious for an 8–year–old, and quite literate, Stephen was an excellent friend.

In addition to being Godfrey’s teacher, Mrs. Lark was also the St. Bernadette choirmaster, ruling with a jelly fist over the Christmas auditions each year –– finding, for all, a part to play, a role to be proud of. Even the choir were given special names for the Holiday, with robes trimmed and tailored by the Rosary Society.

Her daughter, Jayla, was also a classmate. And whilst one might worry that she would receive special attention and ever be cast in a Pageant leading role, quite the opposite was true.

“I still think you would have made a beautiful Mary last year,” Godfrey would insert in random conversations.

“But the Choir is where I love to sing,” she’d protest, reminding Godfrey, too, it’s where they first became good friends.

Friday classes couldn’t finish fast enough. Even Show–and–Tell droned on. Sheila’s fluffy poodle and her corresponding diatribe (even with the puppy piddling on Roger’s ankles) seemed all drag on for hours.

“We should be Joseph and Mary,” Godfrey mooned, gazing at Jayla’s striped wool scarf. His eyes grew fuzzy remembering how close he felt each year, feeling as if part of a family.. whenever Christmas came.

“I like the red and green and purple zig–zags,” he said, describing the wrap around her neck, recalling how she held his hand whilst singing “Silent Night” last year.

The cafeteria was a hubbub of excitement and activity. And not a little noise.

“Alright. Quiet, please. Grades 1–4, line up here. 5–8, by the tables. I want everyone in size order –– Bradley, you’re much taller than Eric, no punching or Cheetos. Wipe your hands –– not on each other, please. Jayla, come help me.”

Angela Lark was a lovely woman. Dark complexioned, perfect smile, always wearing the prettiest colors. Her hair was curly, long and black, tamed with ribbons and held just so. Godfrey loved her grace and charm and how she made him feel.

“Shepherds first. Then Wise Men. Margie, did you bring your Thumbelina for when we audition Mary? Oh –– Betsy Wetsy –– uhh, hmmm. Thumbelina next time, please. Yes, Roger, I was there. Ankles dry yet? And thank you, Jayla. Pass these out, please.”

“I’m going for Joseph. Even if alone,” Godfrey chided Jayla as she handed him, and all present, mimeographed pages.. words to Christmas Carols.

“Shepherds. Come gather. Page two of the hand–out –– ‘O Come All Ye Faithful’ –– inside singing voices –– sweet and innocent. Why are your fingers still orange, Eric? Thank you, Sister Klezmer. A little less bounce in the Intro, please.”

Sister Elizabeth Klezmer played the upright piano with all the Vaudevillian enthusiasm she could slip under the radar. Our Holiday shows had quite a bit of bite to them, almost Ragtime in feel.

Witnessing Wise Men and Angels, Donkeys and Sheep, and ever the coveted role of Little Drummer Boy being cast, Godfrey (with Jayla by his side) sat patiently, both waiting for a chance to exhibit their talents as Betsy Wetsy’s Mom and Dad.

Their harmonized rendition of ‘Mary, Did You Know’ from last year’s choir performance was riveting, despite Sister Klezmer’s tempo leaning a tad dashing–through–the–snow–ish.

“I think we did good,” said Godfrey, who’d forgot to hand Jayla the doll during their performance (so hard for orphans to stop hugging such things). “I hardly got wet at all,” he continued.

Jayla smiled politely, knowing there was only a slim chance her Mother would cast her in such an important role, fearing others would deem it ‘preferential’.

“I feel very good about your chances,” she replied.

Loathe to see the children’s faces when delivering her verdicts, Mrs. Lark chose to post them, the next day, on the School’s Community Bulletin Board.

Lunchtime, so often an excuse for playing outside, was marked by hordes of indoor children milling about the lone leaf of paper delimiting the few starring roles. As noisy the auditions were, the final unveiling was always hushed. Walking past the single white sheet, like a formal wake in a fancy home, no one called out anyone’s name.

Holding hands again for the first time since Christmas last, Godfrey and Jayla faced the (somber) music together.

“Maybe next year,” Jayla offered. “But.. think of the fun we’ll have rehearsing THIS year. I’ll wave from the Stage,” she promised.

“I thought for sure..” was all Godfrey could manage.

“I have good news,” imparted Mrs. Lark, uncertain how to proceed…

No words, good or otherwise, could change how he felt. Of that he was firm.

Silent for the lion’s share of one and three–quarter minutes, replaying those four words over and over in a little boy’s now swimmy head, finally pinching himself, suspecting he might be asleep –– Godfrey swung from happy to mad, back again, thrice, through myriad places in between.

Thrilled, of course, to have this seemingly avowed reversal of fortune suddenly appear in his lap. Angry, worried it was all a cruel joke or some big mistake. But why now, why Mrs. Lark, and why in her official school office?

“I thought…” was all that came out his moving but muted lips.

Trembling, his eyes filling with tears, wiping sweaty palms on corduroy trousers, he dared not look up.

It hurt almost as much the second time, now hearing the truth out loud. Again.

“But I will be playing the role of your Mother,” Angela added.

Johnny Francis Wolf is an Autist - an autistic Artist. Designer, Model, Actor, Writer, and Hustler – Yes. That. Worth a mention – his Acting obelisk – starring in the ill–famed and fated, 2006 indie film, TWO FRONT TEETH. The fact that it is free to watch on YouTube might say an awful lot about its standing with the Academy. Homeless for the better part of these past 8 years, he surfs friends’ couches, shares the offered bed, relies on the kindness of strangers – paying when can, doing what will, performing odd jobs. (Of late.. Ranch Hand his favorite.) From New York to LA, Taos and Santa Fe, Mojave Desert, Coast of North Carolina, points South and South East – considers himself blessed. Johnny’s love of animals, boundless. Current position working on a hacienda in Florida as laborer and horse whisperer has recently come to its seasonal conclusion. Greyhound and the Jersey Shore are drawing him North. Some of all this Bio is true – most of Wolf’s tales as well. Those illusory are hung on stories told him by dear friends or his own brush with similar, if not exactly the same.