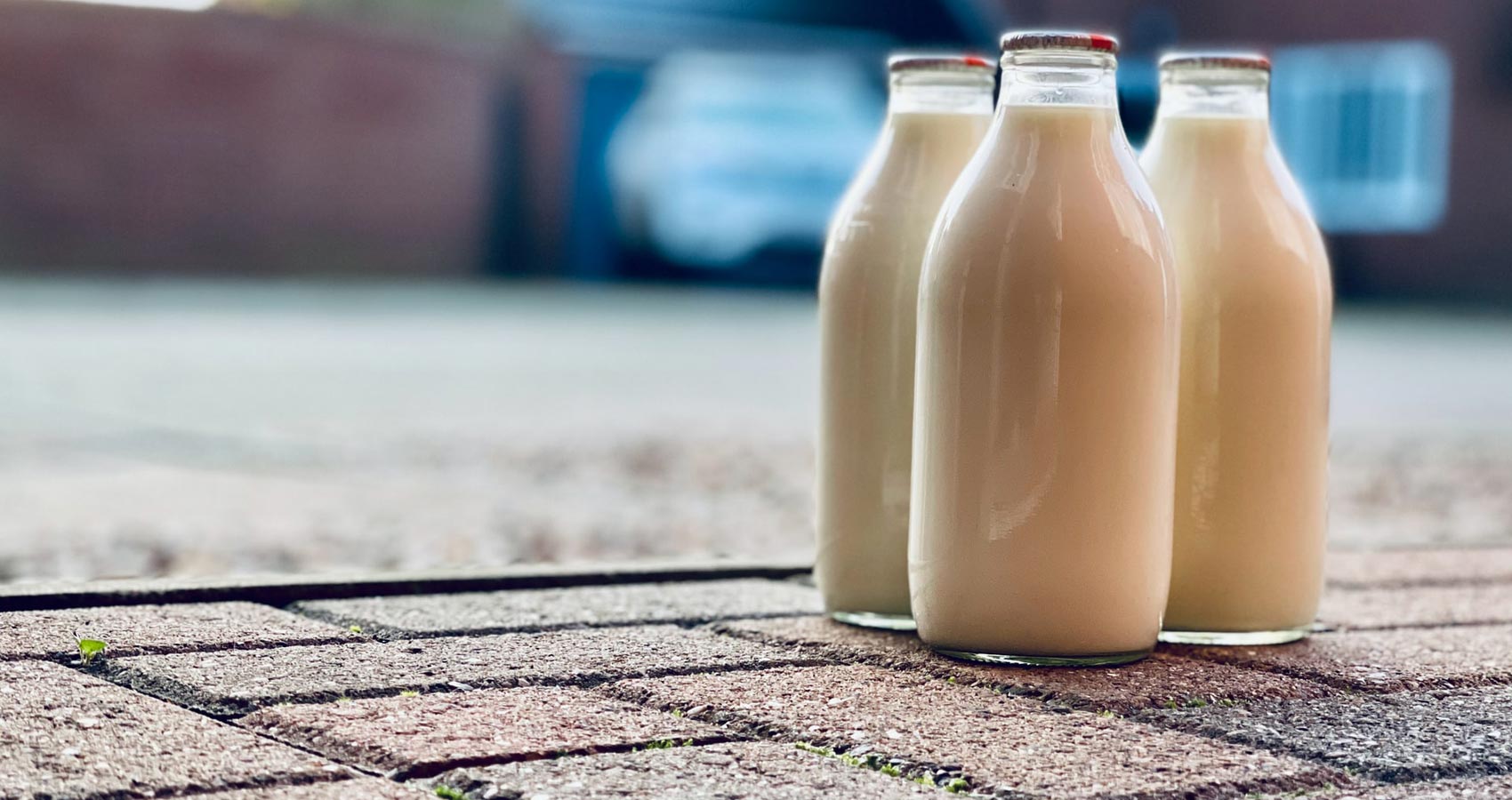 My grandfather was a milkman. He was an oversized, florid faced, jovial man and he and Grandma lived in a small town in southern Minnesota near the Iowa border. As far back as I can remember, a couple of times a year Mom would put me in the bus and send me down there to stay with them for a week or two. I loved it, especially when Grandpa let me go on his deliveries with him.
“You sit right here and ride next to me,” he’d say, getting me situated on the jump seat next to him. Then off we’d go. He had an old milkman’s hat he’d give me to wear. We’d get up at three in the morning and drive his old Chevy to the creamery where he’d light up his pipe, drink a cup of coffee and shoot the breeze with his buddies for a few minutes.
Then he’d say, “Okay, Dougie, let’s get to work.”
His milk truck was shining white with yellow trim, and we’d load it up with bottles of whole milk, 2% and skim, cartons of cottage cheese and even some bottles of chocolate milk and orange drink. Then we’d set out on his rounds, the bottles in their metal baskets clinking and clacking in the back. I loved the whole experience, from rising early and hanging out with the other drivers, to loading the truck and helping out with the deliveries. And, I loved my Grandpa. Mom had her problems at home and I was an only child. Being with Grandpa was an escape from all of that.
The summer when I was eight years old was the most memorable one. It was the summer I got to drive the milk truck but not for the reason you might think, like Grandpa had decided he’d be nice and let me drive it for fun. He was nice but he wasn’t stupid. No way he’d let an eight-year-old kid drive a truck like that.
Here’s what happened. It was a warm July morning and the sun was just coming up. We had finished our rounds and heading back to the creamery. We were driving down a quiet residential street, and people were just starting to come outside to check on the weather and pickup their newspaper and milk. It looked like it was going to be a perfect summer day.
I was sitting in what he called the ‘jump seat,’ a round seat on the passenger’s side, looking out the door on my side watching the world go by. I saw a guy working on a wooden boat in his driveway,
“Look, Grandpa. Cool boat, huh?”
He glanced over and said, “Yeah. It is.” He was quiet for a moment and then added, “Say, how about if you and I go fishing later today?”
“Sounds great.”
I waved to the guy and his boat and he waved back as we continued down the street. I was as happy as could be, watching the small town waking up and enjoying the aroma of Grandpa’s pipe tobacco. Then, suddenly, the truck lurched and began to swerve out of control.
I turned quickly, took one look and yelled, “Oh, my, god!” Grandpa had slumped forward and grabbed onto the steering wheel for balance, jerking the wheel to the left.
“Grandpa!” I yelled, standing up and reaching for him. His foot was jammed on the accelerator and we were speeding up. I kicked his foot off the pedal, but we were still going fast, maybe twenty miles an hour and heading toward a row of cars parked on the side of the street. We were moments away from crashing.
I grabbed the wheel and forced it to the right as Grandpa fell toward me. He was a big man, so with my right arm I held him as best I could and guided him down to the floor. His face was turning grey.
I had to get control of the truck, so I got in the driver’s seat and steered down the middle of the street, swerving from right to left and back again, as I yanked the wheel back and forth. In the back bottles crashed to the floor. In my mind I wondered if I was going to be punished for breaking them. But I had to save Grandpa and keep the truck from crashing, so I concentrated on trying to control the truck.
I was a small kid, but I could just reach the foot brake and steer at the same time. Eventually, I was able to slow the truck down and get it stopped without hitting anything. By then neighbors had run outside to see what the commotion was all about.
“Help me,” I called to them. “My Grandpa’s hurt.”
Someone called for the police and an ambulance. It seemed to take forever to get there but really was only a few minutes. I started crying. I didn’t want my grandpa to die.
He didn’t. Later that day in the hospital Grandpa smiled at me, “You did good, Dougie. Real good.”
I didn’t know what to say, so I just hugged him, tubes coming out of him and all. “I love you, Grandpa,” I said.
“I love you, too,” he told me.
When I was fourteen and after Mom remarried and moved to Portland, Oregon, I moved in with Grandpa and Grandma. I continued to help him with his route and then took over running it after he retired. I ran it by myself for twenty years and still would be running it today if times hadn’t changed and no one wanted home delivery anymore.
Now, I work in the creamery. We specialize in organic milk. People think the calcium is better than in regular milk. I really don’t know. All I know is driving that milk truck with Grandpa was the best job I ever had. After I took over from him, driving it by myself was pretty good, too.