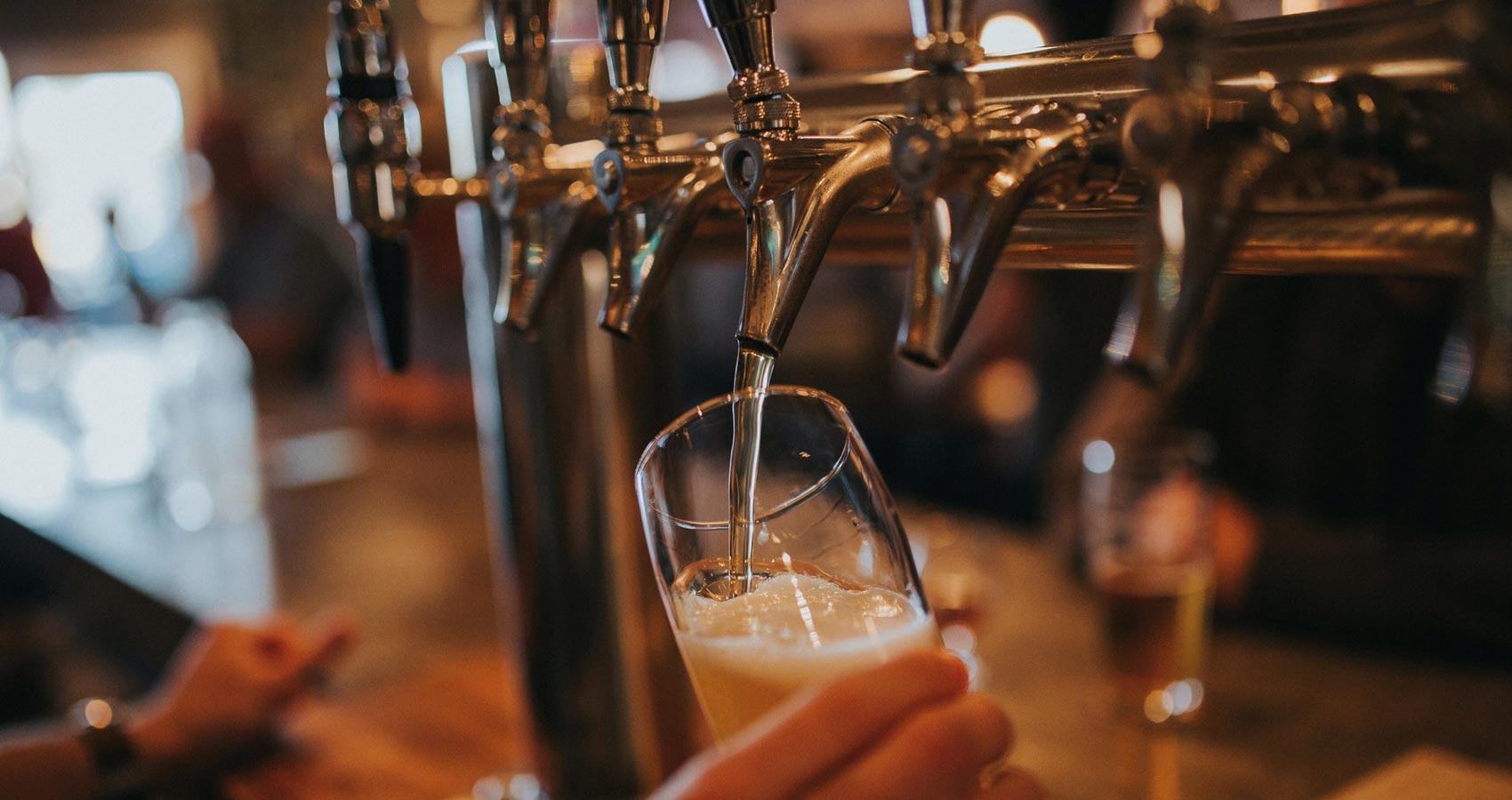 The tantalizing aroma from the kitchen, steady hum of conversation, sense of gaiety, overhead speakers playing classic rock by the likes of Clapton, were the atmosphere at the Friday TG at the Rathskeller. A foursome were the work party assembled at a distant table. The celebration was one year of business at the local garage. Jim, known for saying anything, steered the mood in a clouded direction with his remark.
“Belching, Justin has to lay one or two of us off. Isn’t that so, boss?” The foursome shared a pitcher of dark beer, and large picnic basket of assorted appetizers.
“Jim, where did you hear this information?” Justin asked.
“Overheard a conversation.”
“Don’t you think checking with me first, in private, would have been a better choice?”
“Sorry. But I’m checking with you now,” Jim stated.
Larry, beleaguered with gambling debts; Tyler, putting a kid through college; and Jim, divorcee and problem drinker; looked around and at each other with puzzled expressions.
Justin said, “I need to lay one of you off. Business is down; problems with the damnable supply chain continue. Rising costs for parts may send me back to being a party store clerk at the local B.P. station.”
“Would it make sense to reduce the work week until things pick up?” Larry asked. Larry had a couple grease spots on his t-shirt near its emblem which read,
“Bring on the 4-day work week.”
“I thought of that but it only delays the obvious,” Justin said.
“How about we work five days a week but reduce the hours by a couple each day?” Tyler stated. Tyler, casually dressed, was reserved and private with his opinions.
Justin took another appetizer from the basket, along with a drink of beer from his beer stein, saying,
“Again, good idea but that delays action for business’ sake. Though less salary, you would be eligible for unemployment insurance for several weeks,” Justin said.

After a few seconds of silence, Jim thought he could tone down the shock of layoff being brought up by him in a tactless manner.
He wore a ballcap, medium build and sported a mustache.
“Fellows, anyone want to be part of the betting pool for the MLB All-Star game? That begs the question of who you are rooting for?” Jim asked.
Larry belched his answer, and Tyler stated, “National League; they’re coming back to win.” Justin gave Larry a brief stare-down at his eructation.
“Not really into baseball, Jim. I’m hooked on the news channels and their humdrum dribble,” Justin said.
Larry gestured saying, “Dribble, dribble, dribble. Yeah, let me sign up for that ball pool.”
“Funny, but the MLB All-star game day is my wedding anniversary,” Tyler said.
“You cannot disappoint the wife over that. Girls remember those sorts of things,” Jim said.
“I know it’s a big deal for the baseball lovers every summer,” Justin added.
“What else is up, Jim?” Larry asked.
“Tomorrow, off to do some work over the weekend on the cottage. Putting in new lighting for the living room.”
A blonde waitress with curly hair offered the group more appetizers and a second pitcher. “Heard it’s your work anniversary. Manager says this is on the house.”
“Send him over so we can show our thanks,” Justin said.
“Honey, I’ll leave a damn good tip ’cause you got a cute rump,” Jim blurted.
“We’ll see,” she said, but thought an unsaid expletive.
“Keep that up Jim and we’ll all be looking for new jobs,” Tyler said.
“Hell, she can take a little ribbing. This world’s too damn serious,” Jim said.
Another waiter dropped a tray nearby resulting in collective applause.
An hour passed. The foursome tried to keep things casual and light, but each were asking the same silent question. Justin was talking about the garage and his workers.
“On observation of your work, sometimes you are dabsters and other times daedals.”
“Say more,” Larry said.
“According to the Collins online, a dabster is an incompetent worker. A daedal is skillful and highly wrought. I like you three, so whatever I write in your evaluations is said based on my observations of your effort at the garage.”
Tyler’s cell phone began to light up. Out of the corner of his eye he saw the phone number, and recognized it to be the medical emergency service.
“Excuse me guys, need to take this call.” His expression became ashen moments after the call began.
“Tyler, what’s wrong?” Larry asked.
“Wife. My wife. I need to go.”
“We will meet you there,” Larry said. Jim lingered a few minutes to finish his beer. Justin thanked the manager for the hospitality and left the bar. Jim glanced out the window as Justin was about to cross Main Street. The sound of screeching brakes could be heard. Traffic stopped for minutes.
Larry followed Tyler into the ER reception area and seated himself while Tyler went to gather information about his wife.
“Where is she? Where is my wife, Tina?” Tyler asked a receptionist who had a strong scent of a fruity perfume.
“Your wife is in the ICU. A security person will escort you.”
From the reception desk, Tyler waved to Larry, mouthing ICU. Larry considered his lot in life, but hoped he would never find himself in Tyler’s situation. Jim reminded him of his own problem with gambling. Mentally, he distanced himself from Jim by contrasting their respective issues. At least he knew when to keep quiet. Jim was like an unguarded parakeet, say anything that comes to mind regardless who takes offense.
Tyler heard the whir and beeping of machines as he approached the nurses’ station in the ICU wing. A middle-aged woman, charts in her arms, stepped behind the counter to assume her professional role.
“My wife, Tina?” Tyler said.
“Yes, she is being stabilized having had a minor heart attack.”
“Is any heart attack really minor?” Tyler asked.
“You’re right sir, it wasn’t minor nor fatal, or far-reaching in severity,” the nurse stated.
“Can I go be with her?”
“In ten minutes or so you may. Let the personnel finish their assessments, please.”

Tyler boarded the elevator to return to the general waiting area. He spoke to Larry.
“She is in stable but serious condition, had a heart attack,” Tyler said.
“Can I drive you home?”
”No, I want to stay here for a while. I’m going up to her room in a few minutes. Want to go get a coffee?” Tyler asked.
Larry purchased a small bag of pork rinds to go with his soda. Tyler got a dark roast coffee adding sugar when they were seated.
“I’m sorry about your wife, but I need this garage job. Working off some major debt.”
“I’m not living on Easy Street either. College costs are out of this world these days,” Tyler said. He was a little put off that Larry brought up his circumstances, but choked down the annoyance.
“I like that thing Justin said about the diddle and the dabster,” Larry said.
“You mean daedal and dabster, not diddle.”
“Yeah, whatever.”
“I suppose whoever is not the dabster could hire out as a dade,” Larry said.
“What on earth is a dade?”
“Someone who leads and supports a person who has trouble walking,” Larry said.
“That means one of us will be either a hospital orderly, hardware store salesman, security guard, bartender, or beggar helping one less fortunate,” Tyler said.
As they talked, a uniformed police officer approached their table. He had seen them leave the pub overhearing the conversation details.
“I saw you gentlemen and a third at the pub. Were you with a man named Justin?” Each nodded yes.
“He was in a serious accident minutes ago, and is now unconscious in the Trauma Unit here.”
“Gosh! What happened?” Larry asked.
“As best we can tell he tried crossing Main Street, four lanes of traffic, mid-block and not at a corner. Someone struck him driving 35 MPH.”
“Does he have next of kin?” the Officer asked.
“A wife and couple kids,” Larry said and stated their names to the Officer.
A few minutes later, Larry and Tyler were alone at their corner table.
“I guess for now, we are both regarded as dabsters. Providence has given us another chance at the loss of our employer.”
“You take your time, Tyler. I’ll be up for the challenge of a new work week come Monday,” Larry said.
“Hope Jim is somewhat near tolerable on Monday,” Tyler said.
“Guess we’ll cross that bridge then,” Larry said. Placing his hand on Tyler’s shoulder, Larry added, “Live in the now. That’s all any of us really have at hand.”
“Thanks man. Come Monday, see you there.”
Tyler went to spend time with his wife who was resting, and Larry went to the marina and indulged in a short boat ride on the St. Clair River. Along with the motion of gentle waters and the current, he dedicated himself to rise above circumstances and become self-caring.