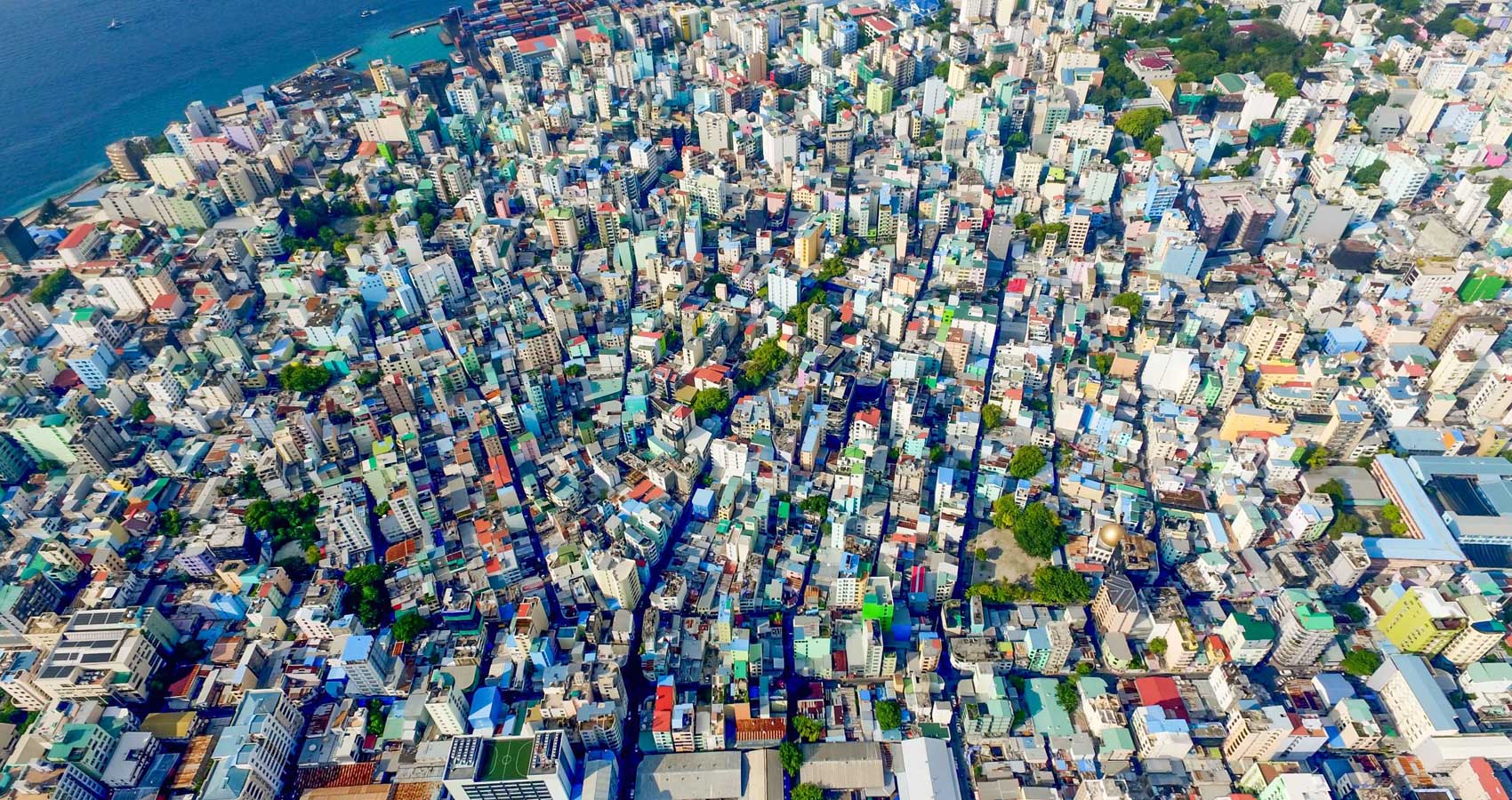 Shirley finds him at their usual spot, the last table on that narrow outdoor patio of Shellbeans. He was facing the wall, as usual, the view of the jetty number seven to his right, where big and small dhonis dock to load and unload people and luggage. Sitting outdoor gives a mixture of cigarette and diesel smell, from all the smokers sitting on the patio and all the boats passing by the jetty and all the speeding motorbikes and cars on the narrow Boduthakurufaanu Magu, a street that rarely seemed to sleep. The same mechanisms that diffuse those odors also emit desultory noise, yet these undesirable constituents of the atmosphere do not affect the coziness of the café, especially when the time is spent with someone desirable enough to completely ignore both.

She bounces between the glass wall and the tiny tables and finally slides herself into the chair. She gives him a wide smile and hangs her bag on the back of the chair. He crushes the butt of his cigarette on the ashtray in the middle of the table that is occupied by a wooden sugar caddy, an empty espresso cup, and his dark brown messenger bag.

She finds hope when she sees that he still uses the bag she gave him five years ago no matter how old and worn out it appears with all the stains and uneven stitches and patches in random places. She hopes that one day; they can stitch up all their broken parts and be whole again.

Greg stands and bends over the table, giving her a cheek-to-cheek and pesters her with a comment, ‘You stink!’ He laughs as she frowns but she isn’t mad at all for that’s their usual greeting since they were thirteen.

‘Talk about yourself first,’ she answers back and settles in the chair.

She waves to the waiter and orders Iced Café Mocha for her and Citrus Passion for him, a mix of pineapple, passion, and lime. He lights another cigarette.

‘Nothing new. Work’s keeping me busy. Told my boss I got a last-minute lunch appointment so I could leave.’

She smiles and uses her handkerchief to fan her sweating self. By November the Maldivian wet season is officially over and the hottest months are about to come.

‘I’ve resigned, leaving for good,’ he raises his left arm and takes a puff. He still wears a black Mala bead bracelet as if he is still not over his teen punk rock years. Shirley has the same bracelet but got over it when they broke up, although she still listens to rock music from time to time even though she really prefers R&B.

She looked for a job in the Maldives, not because of the paradisiacal country but to follow him. For her, paradise is Greg. She always followed Greg ever since they’ve met. She joined the school choir not because she can sing. She tried to learn how to play the guitar although she was better with the keyboard. She enrolled in the same university as Greg was in. She followed him when he worked and lived in Singapore, and then in this Island Nation. And now that he declared his plan, she felt a sense of loss like carrying a broken compass in the middle of a deep forest with thousands of tall trees that all look the same.

He nods and blows smoke to his right, away from her face.

The waiter came with their drinks. She thinks about the amount of fat in the mountain of whipped cream on her drink as she forgot to ask the waiter to not put any. His citrus drink looks more subdued.

‘Going back home or moving to another country?’ She scoops the whipped cream with a bar spoon and dumps it on the saucer that the waiter has provided. She knows, he couldn’t stay in just one place for a long time.

‘Got a job offer in Qatar. But will go home to Manila first.’

‘I see.’ She cringes after sipping a drink overloaded with sugar.

‘And how’s that Maldivian guy with a British accent?’ He changes the subject when he wants to avoid a topic. And when he does, he always asks about her relationships, something she never did to him for she is never happy to hear about all his affairs, left and right. But he tells her all the same.

‘Well, I broke up with him a few months ago. He was in a rush to marry and I’m not ready to convert. He couldn’t wait and found himself a girl from his island.’ She waves to the waiter and orders water as the sugar overload starts to sting her throat.

‘It’s funny you know, the guy grew up in the U.K., brilliant and modern mind, but still very devoted to religion.’ She knows it’s not about converting. It’s about Greg. She’s been waiting for him for years to come back to her, until now. She’s waiting to be finally invited to his life. She’s getting tired of following him.

‘Not in any relationship now?’ Greg’s citrus drink is finished, and he asks for water this time.

‘Nope.’ Her voice was still cheery until Greg drops the bomb.

She’s used to getting wrecked. Whether a car or a ship doesn’t really make a difference. But she survives every time. Gets her dislocated bones rearranged, resurfaces after sinking to the bottom of the ocean bed. But this time it’s different. She’ll be anchored at one hundred meters deep, never to resurface again.

Shirley coughs. ‘With who?’ She asks but she knows. She definitely knows.

He clucks his tongue. ‘Riza. I’ve told you about her,’ he said, like a child complaining to a mom who forgot to buy a toy he wished for.

‘Oh yeah.’ Right. The reverend’s daughter. That righteous girl in their high school who always wore very long skirts and avoided boys at all cost. That girl who goes to church in all white, carrying her bible and a bag with notebooks and bond papers with printed scriptures on them. The girl who reported Shirley in high school for cutting classes, which she only did for the first and last time because of Greg.

‘How long have you been together?’

‘Two years. I have told you about her since day one. How can you forget?’ Yes, of course, she knows. How can she forget? She never forgets even a single detail of Greg’s life. His birthday. His mom’s birthday. His favorite rock bands. His girlfriends. His one-night stands. His fear of heights. His dislike of whiskey. His dislike of fish and the irony of living in a country abundant of it.

‘You getting married. You stopped cheating?’ she tries to sound playful.

‘Of course, you stopped cheating after we broke up right?’

The young guys from the next table laughed. Smoke from their vapes covers the area like clouds on a sunny day. Miley’s husky voice is suddenly loud and clear from the small speaker attached to the ceiling as if she’s singing right next to Shirley, Forever, and ever, no more (no more).

She tries to laugh as she crumbles inside. She should have eaten that mountain of whipped cream. She needs all the extra sugar right now to stop her body from trembling.

He lights another cigarette and looks at the ashtray. The wind blows mildly and messes up the table with bits of ashes. The diesel odor becomes stronger. A huge resort dhoni unloads about twenty people. The engine noise coming from speedboats and motorbikes becomes unbearable. Her sticky face stains her white handkerchief muddy and the heat of the midday sun striking the tiny concrete jungle becomes intolerable.

‘Can you come home for my wedding? It’s next month.’ He sticks his cigarette between his lips.

‘So soon!’ She still pretends to sound cheery. ‘I am not so sure because I just came back from holiday. And I’m going to London next week for a business trip with the boss. But I’ll try to convince my boss to give me even a week. I will let you know.’ She knows he will notice the ingenuity.

Her phone lights up and sees a text from KFC that says ‘Buy Two Classic or Spicy Zingers and save MVR45 until 30th November only’.

‘Hey, I just got a text message from my boss now. A client suddenly showed up in the office. I have to go.’ She picks up her bag and waits for him to stand up. She gives him a hug and a peck on the cheek.

He just looks at her and continues the nicotine intake. His eyes are sad. He suddenly looks older to her and she notices all the lines on his forehead and beside his doe eyes.

‘Congrats and all the best. Keep me posted okay?’ She looks at the shabby messenger bag that still occupies more than half of the tiny table. ‘And maybe you need to change your bag, it’s totally worn out.’

She smiles a painful smile and for the first time in her life, she walks away from him. She walks not to follow him but to start a path of her own.

She’s heading to KFC to get Spicy Zinger. She has very little tolerance for spice. A Spicy Zinger is a good reason to cry.

Alissa Marcelo is a small-town girl from the Philippines who is now living in the Maldives. She is a hotelier by profession, writer by imagination, and mermaid by heart. She writes on aysabaw.com. If not working or writing, she can be found swimming with turtles and sharks, playing her guitar under a palm tree, or reading herself to sleep.