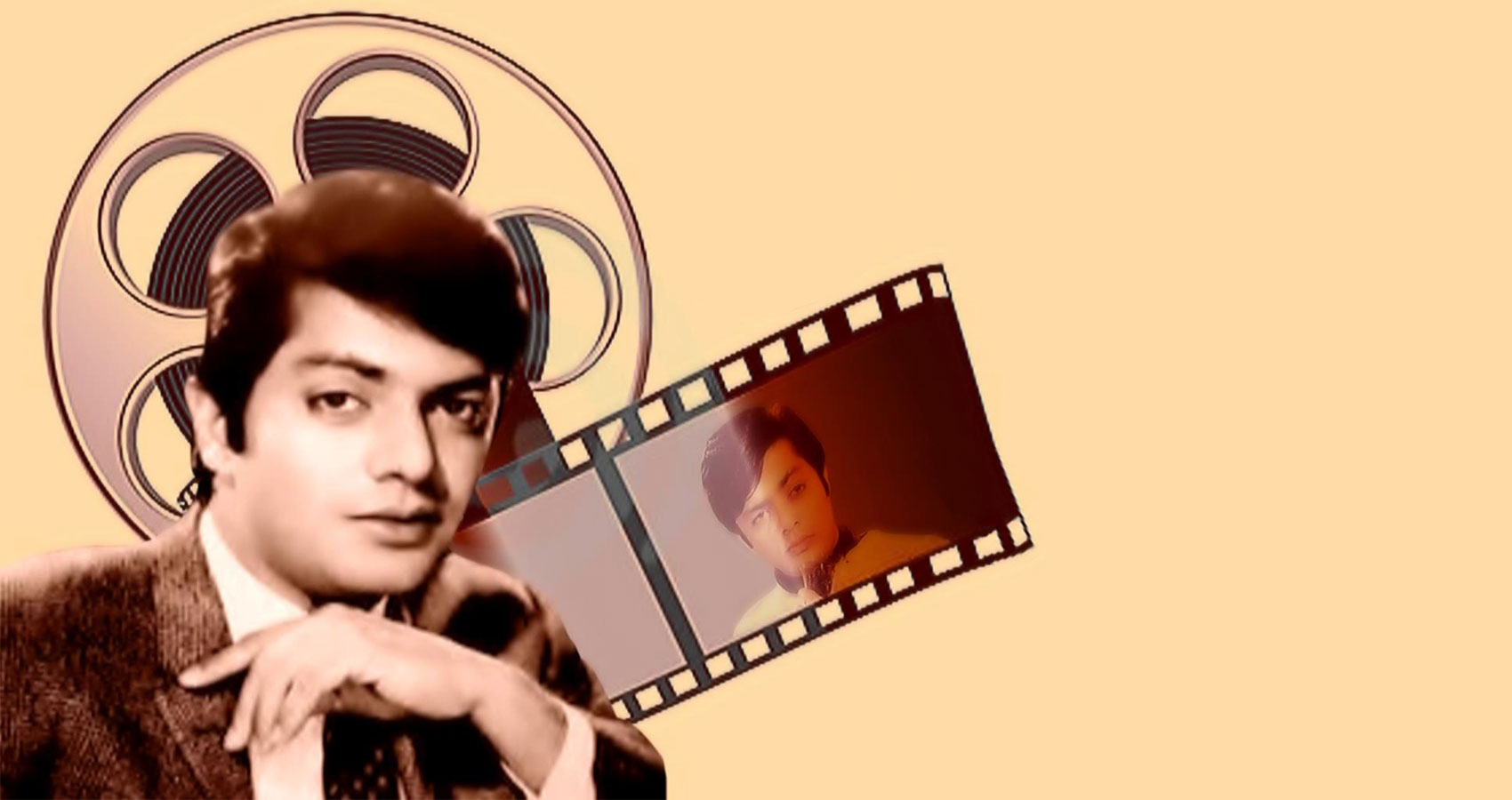 A Prose on Waheed Murad

Who isn’t smitten by the dashing Waheed Murad? Despite his meteoric success to stardom, Waheed is a fashion metaphor, class, culture and romantic nostalgia to boot, as Elvis Presley is to rock and roll. When I pay a visit to his filmy website to catch a glimpse of him, I am both intrigued and intimidated just being here. Because this world is much beyond my comprehension. Yet, I am here. Come to think of it, that’s exactly the kind of effect Waheed Murad has on people. And trust me, as someone who knows nothing about the movie world, let alone Waheed, I am just as enchanted as anyone else, drawn into his aura. Far apart we may be, but he seems to be hovering on the outskirts of my mind’s eye, whom I now try to fathom. Is he unfathomable? Most likely, but at the cost of being laughed at by all of Waheed’s associates, and perhaps against my better judgement, I set out in a bid, to explore his artistry. The best that there is by a long shot in the Himalayan peninsula.

Not inconsequentially, I cannot but help thinking of the obvious. Very rarely, does one come across a personality of Waheed’s stature in the movie world. Regardless of age, he strikes a chord even with the fourth graders, particularly one girl that comes to mind, who watches his movie, Armaan in grade four and takes a fancy to him. She cannot be made to wake up the next morning to go to school, because, her eyelids are laden with a lovesick potion; he, who is a senior by 30 years at least, the same age as her parents. This “chocolate” hero, gives her a flavour of his maddening charms, like he does to millions of crazed, intergenerational women, back in the day, and today. A zesty king of the hearts, this tall man with slightly drooping shoulders, is but not rugged necessarily. He stalks them in their dream and daydream as though Venus, Cupid, and Aphrodite with the entire pantheon of love deities have colluded to shoot random arrows with this love message that it is expressly vital.

In the meantime, as the time passes, that fourth grader notably, continue to suffer from love affliction at the risk of being precocious. If this sweet sensation is corrupting in the Socratic measure, then so be it. Because, this puppy love, which no hemlock can slay, grows and flourishes like a secret garden in her charmed heart. She does not outgrow this anytime soon, although she may have grown out of her dresses. It sinks deep, and freezes in the moment’s rock-bottom, with many historical chain of events piled up over it. Primarily, the bad blood and tensions between the East and West Pakistan, culminating in a brutal civil war, ending in a severed relationship. I don’t want to go into the gory details of the war or its causes. I only want to celebrate the magnetic, Waheed Murad, to prove a point; that he is rightly an atypical idealist.

Having said this, it is not an easy feat. Being a Bangladeshi, it is not easy to put only Waheed with his ideology in a bubble without the historical rubble. Because his fans, even in the aftermath, think of him as just that, uncontaminated as the raindrops, pure as the driven snow, who never betrays a poet’s imagination. For many years after the war, when I rekindle my frozen memory of the somewhat snapped link with my dark hero, since I am that precocious fourth grader, I retrieve him from a memory storage in a holographic projection, as it were, with awful clarity. Curious as it is, this shocking revelation isn’t a case of a novelty wearing off, rather one of idolatry, to the point of awakening him from his crypt. Emboldened by this blind loyalty, I place him in the forefront of my thoughts; this dandy, debonair hero, pulled up from my memory bank. With little hope, or none at all, for all that is worth, and much for his fans’ sake, as well as mine, this figment of my imagination lends itself to a legacy within a legacy. Like Hamlet’s ghost, it haunts to goad me farther to the brink of God-knows-what, to unravel a mystery about him that the world knows not. This spell, fogs all my critical thinking; an insane craving resurfaces, strong and ravenous that cannot dispel my thoughts about him. Even better that I retreat into a fantasy world to shape him as whatever I wish in my story, a full-blooded lover, or platonic, as decreed by our circumstance.

Platonic, now there’s a thought. At best, this can clue me in to seek out a new dimension in Waheed’s gripping love scenes. That which may assist in eliciting his personal thoughts on romance through his movies. He is not an incidental hero, who perchance takes Lollywood by the storm. What is it after all, that makes Waheed’s love scenes a cut above the rest, thus far special? Watching Waheed, in circumspect and maturity, I say this, that even in his most flirtatious roles, there is a fascinating underlay. An aspect, of a shadow reality, which elude the viewers. In essence, an urgency to define love as fulfilling and an undying emotion, which Waheed the persona, exudes almost involuntarily. His nuanced performances of intimacy, the touches, the facial expressions, the linguistic flourishes of sweet endearments, poured into the ears of his leading ladies, are all accomplished with such dexterity that the self and the art bond indistinguishably. Hence, Waheed the mask, and Waheed the man converge into one whole inseparable entity, alluding to an unscripted streaming.

To tie up the loose ends, his romantic roles translate, by far, into a fusion; a fusion of the physical and the spiritual which dictates the former to be a stepping stone to a higher ground of love. And in his passionate pursuance, this zeal for love is akin to bandagi and zindagi. Something, not sought after by the majority of actors, but all too uncommon a concept; an idea of resolute love, which resides in the soul to mean that he is never really in love with the person, but with the idea of love itself in the spirit, which he strives to conceptualise and perfect in its abstraction.

What’s more? To understand Waheed, I delve deeper into his fundamental ideas. It dawns on me that Waheed’s movies unveil not just his artistic endeavour, but his life and death, and a potent philosophy all entwined in one seamless composition. It is very convincing that the man that he is, the lover that he acts, are all but in pursuit of love for humanity, truth, beauty, and fairness. And as I stumble on the newspaper, Dawn: In Memoriam, The Mystery Behind Waheed Murad, my inkling is corroborated; that the coded messages conveyed in Zubaida, Bandagi, Samundar, Mastana Mahi, and Naag Mani are all but well thought out allegories, central to his core beliefs of religious equality, and mutual bonding in a country torn apart by ravages of the war and zealous stupidity. This uncompromising situation to find any common-ground for union, empathy, and egalitarianism disturbs his equilibrium profoundly. The irreconcilable wave of religious apathy, social and political disparity, precludes him to achieve poetic justice to a fatal consequence; an irreparable loss pushing his fans to the edge of inconsolable grief.

As he dies in carelessness, for all it may seem, a death most tragic, but certainly not in vain. Because he has never really rendered himself off-limits to his fans. His remains burn aflame in their tender love for him, as he appears and disappears in a stream of consciousness, like his movie, Isharaa, also marks his artistic prowess. In fact, Elvis has never left the building. His signature writ large on the silver screen, the appealing smiles of youth, moody, blues looks, and croaky, sexy voice-overs with a marked air of romance, set him apart from casual ordinariness; a cast, not from the same mould, as the other actors of his time.

Lest the world forgets, he is that Sufi steeped in love, that poet lost in lyrics, and that postmodern visionary drunk with idealism. But also an actor who lives to die another day. He, who offers himself to posterity in all earnestness, not in the sense of a celebrity hero, but as a question for those, who pine away for him, to wonder, and to ponder timelessly about Waheed Murad, the man. Hence, his fans remember this powerful enigma, as mei aisa ak sawaal hu; I am that unanswered question; I am that unresolved mystery.

It may very well be that Waheed is none of this, but a movie icon made larger than life. However, at the behest of my muse, when I retrace this journey, hints at all these possibilities. To conclude Waheed Murad’s inconclusive tale, one may gauge him to be a sentient being, existing within the subliminal cinemas of his mind, and essentially, in the futuristic outreach of his arts.