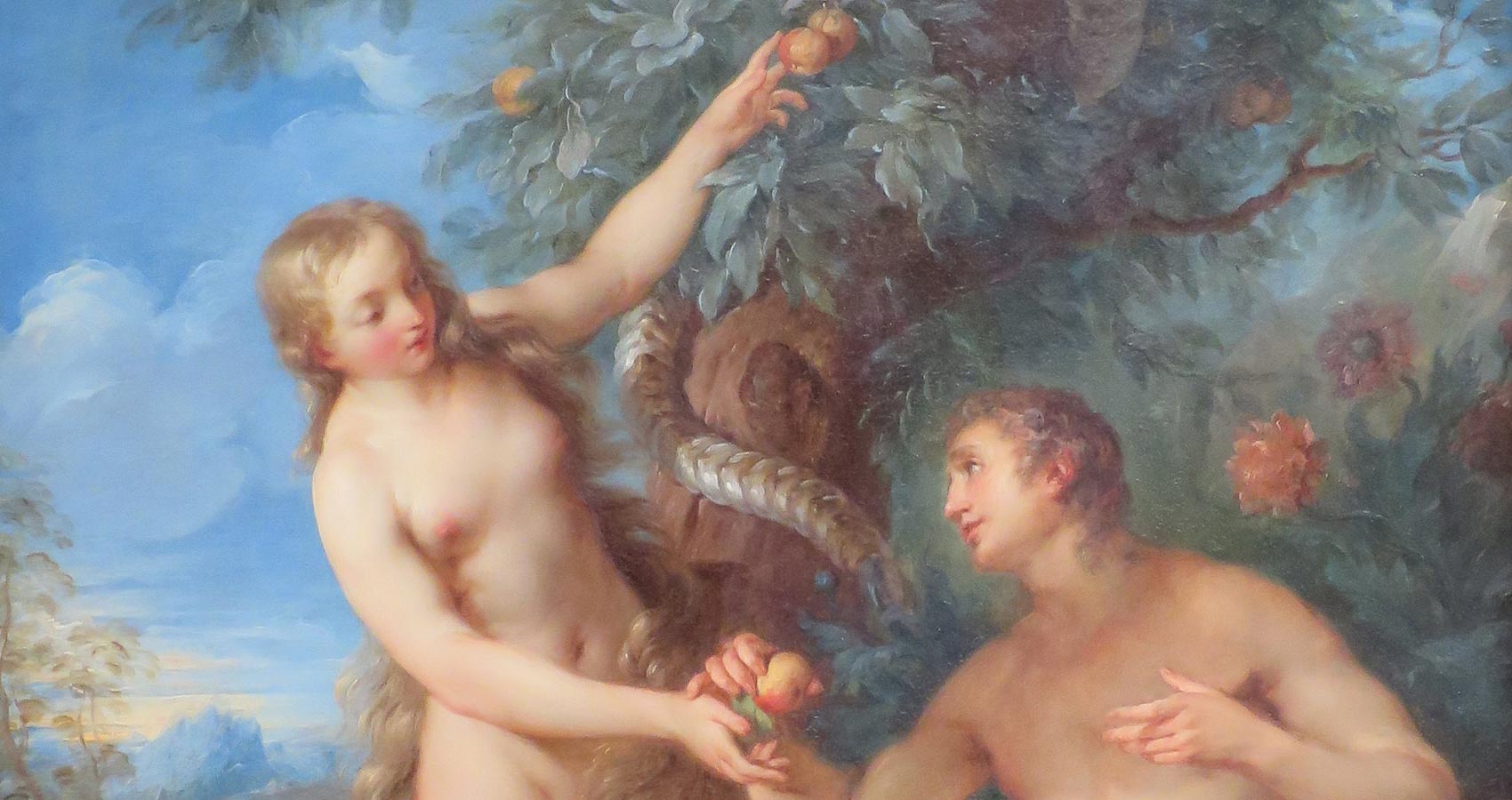 When God created Eve, he had created not a companion, but a woman of power. One who would be instrumental to the creation of human history. Her act, a single spark that resulted in this decisive moment was a result of her independent choice—no easy feat, her choice to violate the rules—eat the forbidden fruit. But it was also a crucial moment to question authority and to give some shape to a cosmic plan which in my view is freedom, different from the freedom of wandering aimlessly in the cosmic Garden, which had not involved any decision-making. A life that had not suffered any conflicts of good and evil or the freedom of choice. This moment shed light on what intelligent history was. And it was born, like Prometheus, stealing the fire from the heavens to spread enlightenment to mankind.

This misconstrued narrative of the scripture, which portrays Eve purportedly as a fallen creature, a devil’s assistant responsible for Adam’s transgression, if not a myth then what? It is a powerful disguise of metaphor that eludes us. One that narrates a different story–a story of empowerment, her inner strengths, what she can do to change the world, societies, and communities with her intelligence that God had innately bestowed upon women—Eve. God had not created women to be frail or deceptive, or as mere companions to the male, but as equals and to complement, without whom the other would not be complete.

This is who she is. Eve, a woman of the world, capable of turning the heavens and the earth upside down–whether or not it was a good choice or a bad one is a moot point. But Eve struck a chord in the heart of the cosmic plan, which changed everything. That is the most significant point.

If this is how women can be defined, then there is more evidence of her strength and courage which providence has bestowed upon her—childbirth—the incredible labour pains which is the end result of pregnancy, is the highest to be recorded on a scale 10 out of 10. But, before this, a mother carries the child through over the entire pregnancy. Her body goes through hormonal changes and subjects it to all kinds of imbalances, and bodily aches— pelvic bone-cracking, tailbone popping, gestational diabetes, postnatal depression and what have we? The fact that she is able to tolerate all this in the end and live a normal life at the same time is praiseworthy. That is what matters. This is what Eve does happily and more.

I had read in Pearl S. Buck’s Good Earth, a really powerful passage that has stayed with me. It was about a pregnant Chinese farmer, a young girl who goes into labour as she sits in the field working. While in labour, she walks to her hut, gives birth alone, cuts her umbilical cord, feeds the baby, rests, and then goes straight back to the field. If this is not strength then what is? Innate biological endowment, how baby’s nutrition, its milk is made instantly and automatically and continues to be produced until the baby is old enough to eat solids.

There is no real end to a woman’s strength—how infinitely blessed her finite body is. Her contributions glue life together. For fantasy’s sake, if we were to take them out of operation even for a day, we would already see the world collapse into anguish, and its marked bruises and injures would be visible. Could the world survive without Eve?

As to the misogynistic mindset, one clear message is this, on international women’s day, that your mothers had you, they raised and you owe your dear life to women. Ancient study records great poets, keen politicians, skilled painters, sharp scientists, and wise authors and mathematicians amongst women. From time immemorial she/they had walked the tight ropes because no one would recognise their talents. More than men, even, intellectual life combined with motherhood, without a fail and/or posthumously recognised. There were no other places for them other than what a misogynist defined for them. Where they thought was best to contain a woman. And they blamed it on providence that God wanted it this way. Were they not undermining His Eve? Really? If God wanted to condescend, women, surely, He would have banished Eve only, and had kept His heaven clean. But that didn’t happen.

Let the misogynists be warned through this Adam and Eve fable, the powerful metaphor of Lucifer eludes us. Lucifer alludes to that evil, which the misogynists nurture in the veins—destruction of women through which the entire destruction of the human race could happen. The idea of Lucifer alludes to more than what the eye can see. Where the real evil lies and what it can do. This evil is much greater than we know; much greater than scoring a point against women. Whose side you want to be on, is ultimately your choice, I dare say, Eve too had made a choice, but remember the consequences of your action? God had not created Eve in vain, She is no ordinary creation, a female only. She is a woman of extraordinary courage, who defeated Lucifer, by proving to him that she is not vulnerable. The strength she carries within her is more, not less, to be recognized and understood through her perspectives, not through those of the misogynist.