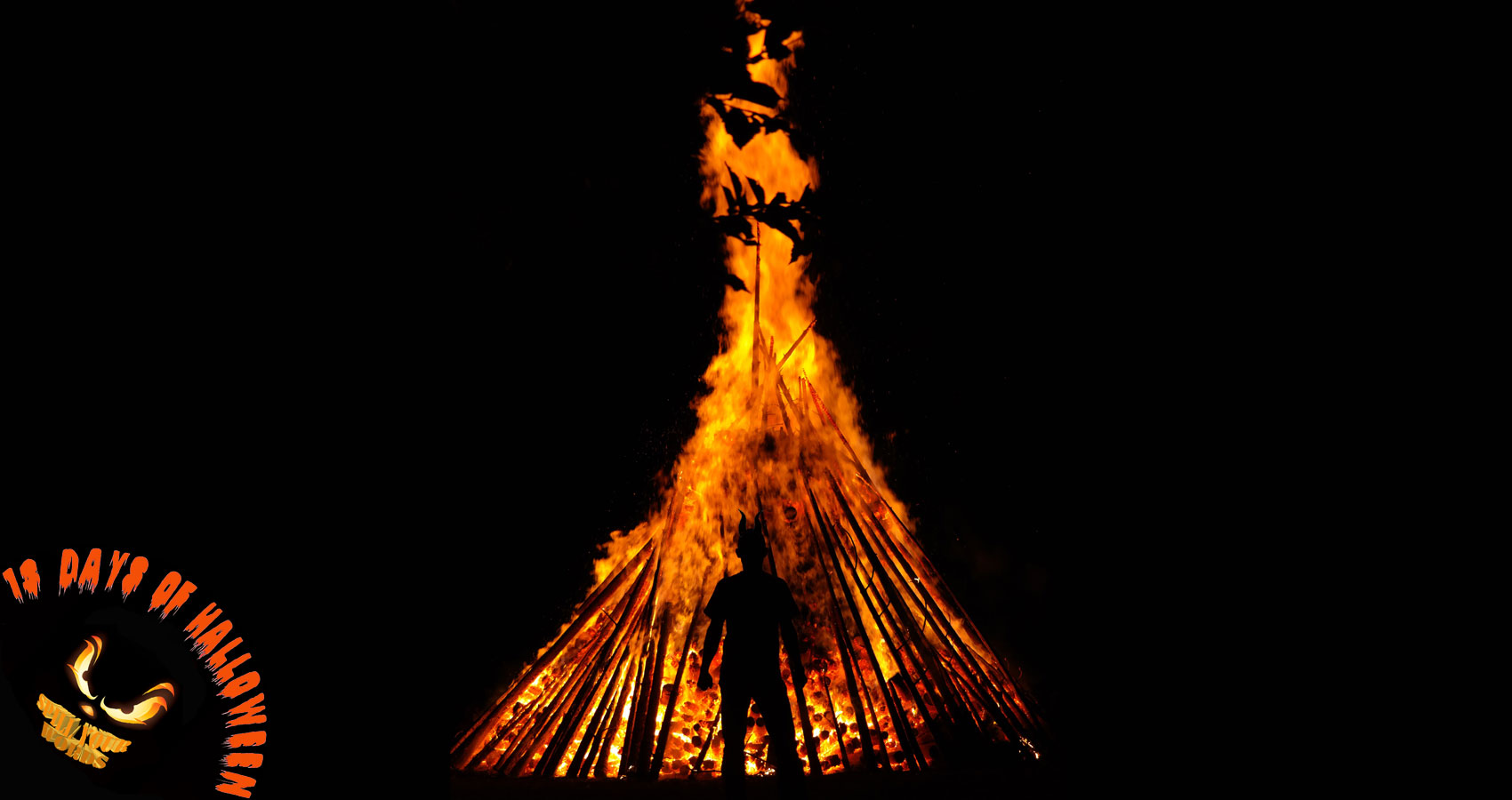 It was Halloween.  Desmond’s favorite holiday.  A day to become someone else.
Or who you really are.
His office encouraged employees to wear costumes.  Desmond had made a sculptured mask – a devilish demon with horns and ghosts and electrified rats crawling out of an open skull.  He spent months on it.  The way he used to when he was a kid, making monsters out of paper mache – four-trunked elephants, alien bubble creatures with oozing green slime.  He’d create four or five and change costumes during the night, trick-or-treating in his neighborhood wearing each costume, collecting enough candy to last until Christmas.  Then of course entering the school Halloween costume party and winning every year.

His favorite creation was Hellfire Man – a pyromaniac who could set anyone or anything on fire with his mind – his head was an elaborate volcano with fiery lava pouring down the sides.
Those were the days!

Desmond decided to create a spectacular version of Hellfire Man this year and spent at least six months creating his sculptured masterpiece.  He bought a custom-made fire-red cape and black pants and black turtleneck so he could still work comfortably– well, at least as comfortably as he ever did before.

He opened his car door and carefully placed his bubble-wrapped Hellfire Man headpiece in the passenger seat.  He smiled to himself, proud to recreate Hellfire Man as an adult.

His smile quickly faded as he drove closer to work, thinking about month-end reports due by noon.  He shook his left arm that seemed suddenly numb as he struggled to breathe.
Air wasn’t going in and out.  Panic attack or ?
A dull then sharper ache filled his chest – a ping alert vibrating then stabbing on and off as the traffic lights turned colors of quiet desperation
He had supped his life full of everyday horrors
a loyal employee for the same company for twenty years
his body was revolting against the constant complaints of his boss
who picked and picked at every little detail
He was operating at nearly ninety-nine percent perfection
Staying late and working through lunch
so his work and all the other work dumped in his inbox
was complete by day’s end

He white-knuckled the steering wheel, his every impulse urging him to turn around and go home and hug his fourteen year-old spaniel mix probably dying but he was too afraid to find out that truth yet
as he soothed his permanently broken heart every night writing another woeful poem for no one
since the only woman who ever called him sweetheart – Laura – was gone – left him for that mortgage banker getting rich during the Recession
What kind of life or love could be hoped for?  His best years were spent wanting more
clinging to less
Lying in bed praying into unconsciousness to a god he felt was no longer listening
Instead
Desmond grabbed a handful of antacids from his glove compartment and swallowed them down
mopping the beads of sweat from his cheek – or were they tears?
I’ll go to the doctor
he lied to himself – it was hell to take even a half day off without
spending an hour being criticized by his boss for whatever wasn’t done
in his absence

After he pulled into his parking space for the last twenty years – even though it wasn’t assigned – he always parked in Space 1313, a number he thought was lucky and even won twelve dollars once playing Powerball when he chose 13 as the mega number.

He unwrapped the bubble wrap and donned the headpiece checking the rearview mirror
Perfect.  He felt thirteen again, the last time he wore this childhood version.  He felt alive
almost like a dark superhero.

He swiped his employee key card and walked proudly wearing his Hellfire headpiece to the smiles and laughter of his co-workers, the walls were decorated with the usual paper ghosts and spider webs crawling with plastic tarantulas.  Plastic pumpkins filled with candy were on several desks.
Desmond grabbed a handful of candy corn and M&M’s and sat on his swivel chair and booted up his computer, logging in.  He took off the headpiece and munched on candy, happy as he could remember.
He rested the Hellfire headpiece beside his desk on a spare folding chair like an old friend visiting him from fond childhood days
He leaned into the daily drudgery at his gray bone cage of a cubicle
typing away on a spreadsheet
The only real friend he thought he had – John
stopped his friendly chats
Desmond looked over at John
chatting and laughing with everyone else
Desmond stuffed his ear buds deeper into his ears to block out his co-workers’ jovial banter
His head started to ache – a dozen pinpoints of needles jabbed
through his skull from the inside out

The human resources manager – Charles called him into his office

Desmond lumbered into his sparsely decorated office and sat down, interlacing his fingers as if about to pray once again
or perhaps have a prayer answered

“We’ve had a number of complaints” Charles glanced up sternly from a pile of paperwork
“What are you talking about?!” Desmond raised his voice too much yet again
as a worker beast inside invisible walls of  pain – he could not be silent a moment longer
Desmond’s head was throbbing
suddenly aware he was dizzy and nauseous
He could barely eat solid food anymore and his stomach suddenly tidal-waved bile
splashing up his esophagus onto his sanded tongue
accompanied by the thunder of a summer storm rising in his chest

“Your supervisor and John complained that you were disrespectful toward him.”
Desmond’s jaw dropped – after all the extra work and stress he had to deal with
while John took vacation after vacation and the lunches he had bought him
while he was getting his MBA, the Christmas gifts-
before Desmond could respond–
“I believe it’s best to part ways…”
“What?!”
“We’ll send you your final check tomorrow.  You can get your things and I’ll walk you out.”
Charles stood up
There wouldn’t even be a handshake good-bye
Desmond struggled to stand as his vision blurred but managed to hand Charles his key card
but he didn’t dare raise his voice again so he simply nodded and they walked out together

“I just need my headpiece”

He picked it up from his desk and Charles walked in front of him
Desmond decided he would not waste this one opportunity to be Hellfire Man and put on the headpiece
Sparks suddenly shot out of the volcano and fire and lava began bubbling from the volcano’s mouth
As Desmond walked two steps behind Charles
Desmond’s eyes went white – rolling backwards
The heat seemed to melt the headpiece into Desmond’s skull, transforming him into Hellfire Man
his skin sizzled and smoked melding with the lava and fire oozing down his face and neck

One skill that wasn’t on Desmond’s resume revealed itself  –

As Desmond glared in bloodcurdling white-hot rage that was brewing,
simmering for the last twenty years
every stapler on every desk flew into the air shooting staples like fiery bullets at employees
hitting John in the head, blood spurting everywhere
hitting Charles in the chest who fell to his knees clutching his chest

Around the corner, in his supervisor’s office, a mug of pens flew into the air catching fire
stabbing him in the neck as flaming swords
blood splattering onto Desmond’s freshly printed spreadsheet

Desmond walked through the chaos calmly – his headache and chest pains suddenly disappeared
he walked past his supervisor’s office to see him slumped lifeless in his chair
He grabbed his I heart Michigan mug from the kitchen, swatted a flying staple remover
from his left ear and exited the burning building that held his body
but not his soul for the past twenty years
exhaling evil as a walking pyre of hellfire into the hallowed haunted night
Desmond finally became who he truly was – Hellfire Man
who walked the earth again under a magnificently merciless moon