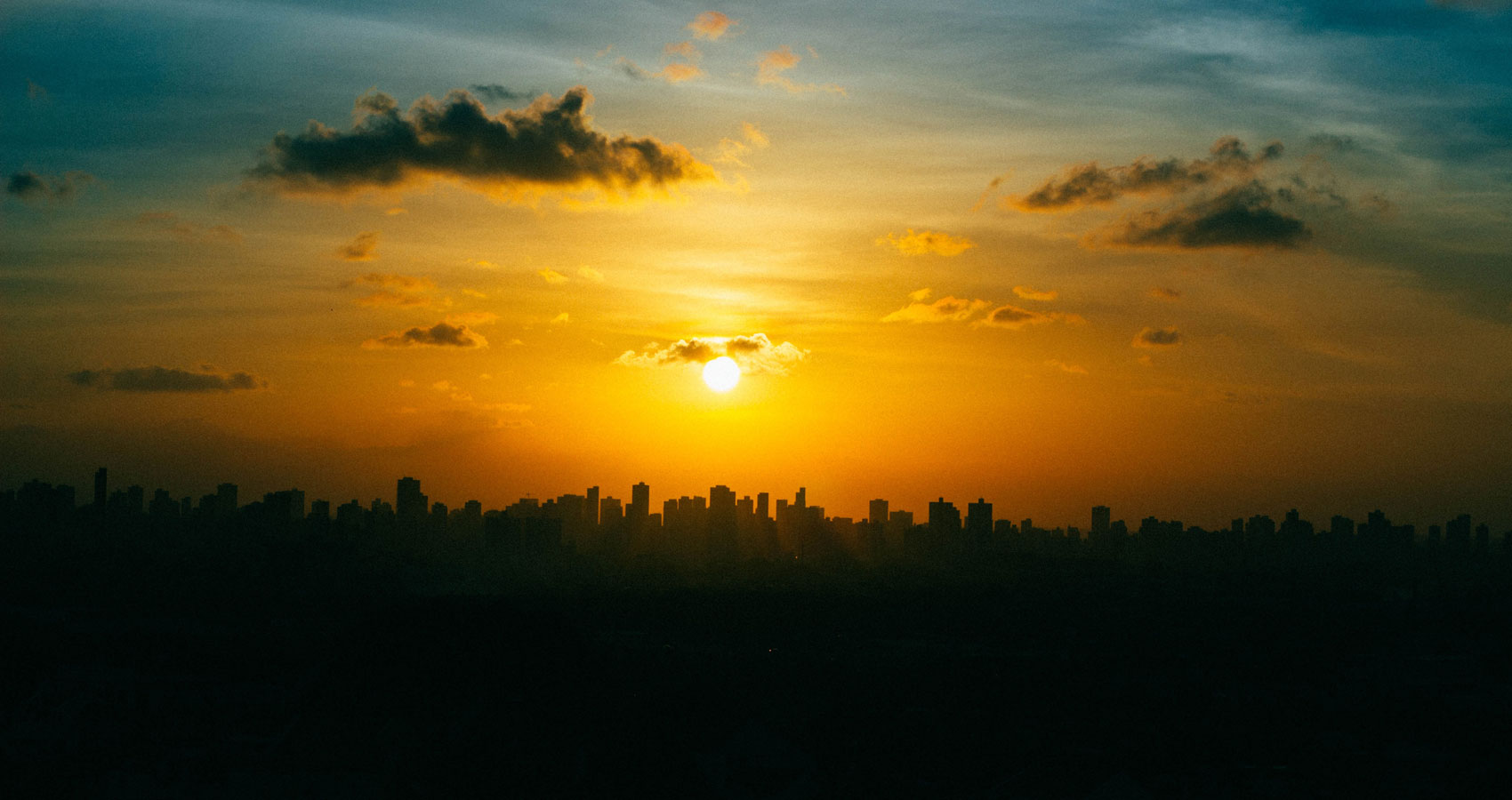 I Heard A Voice

I Heard A Voice

They were standing at the ledge. Their view mirrored a panorama of buildings and smoke stacks. Great edifices, heaving asymmetrically, skewed with monster cylinders venting plumes of expended energy. The farms, the land, scarcely discernible, were hiding from the crowding machines in ambient spaces where life of life and lives of lives grappled and struggled for survival. The agrarians had lost the battle, and the machines, as if with endeavor, had attempted to reconstruct victories into paradigms from the grist of Ayn Rand or Thomas Hobbes, the dizygotic twins, at once dichotomous and unitary.

“Where else other than from the top of a skyscraper can we see the power of the Maker, the Creator of all things dynamic and powerful?” The Banker cusp his hand at his forehead and turned his head in a slow arc, as to inspect the power of capital and treasures of earth.
“Nowhere but here; we stand at the zenith,” the CEO of the hedge fund, United Capital World-Wide, her eyes hidden behind the lens of her mirrored-black glasses, stood poised, an erection of pride. “This portrait is a snapshot, a revelation that god is in all of us.”

“But this is only an imprint. When all of this before us is finalized, we will truly bring the god in each of us into one god. The combined unit gods will bring all of this to everyone.” The Banker had his own pride. “Don’t forget, the capital purchased the labor.”
“Well, I suppose we can agree to disagree,” she said, with cheap mirth; attempted. She knew no humor.

“Yes, but then labor is the womb of capital,” he said.

“Again, chicken-and-the-egg.” They both chuckled, pretended, he as droll as she.

Another man appeared. He was dressed in a brown suit, not the power-dress of the capitalist or power-broker-politician, these two, at times libertarians or socialists, depending on the potential for raked gain. But, brown was the color of integrity. And even the color of the land below the planting. His hair was grey, his eyes masked with wire-rimmed bifocals, his stance erect, exhibiting a posture of strength and character; such traits bred through meekness. Though, his deportment issued a tone–alien.

“Excuse me, sir. Are you visiting?” the Banker asked.
“I am.”
“Have you ever been to the city before?” she asked.

He moved toward them and shook the Banker’s hand and introduced himself. Then, allowing the CEO to extend her hand, he did likewise with her.

“And, if you don’t mind my asking, what brings you back?”

The man in the brown suit turned toward the skyline and stared, his eyes trying to pierce the great volumes of progress before him. “I lost something and came to see what…who vanquished me.” His voice seemed to focus toward the horizon, as his eyes guided his words.

The CEO and Banker looked at one another, each with puzzled gaze. Was a response beyond small-talk in order? “What did you lose?” The Banker at last spoke. The CEO looked at him as she shrugged her shoulders a bit. She, too, wondered about the comment. However, both were pleased that a somber disposition now enveloped the occasion, given each one’s intrinsic ingredients.

“Your life? But you are standing here.” The two now tensed, but a bit. He was a strange man, a mutterer of strange patois; of words that seemed almost lunatic, not of someone who should be at the top of a skyscraper, and certainly not close to the ledge.

The CEO began rummaging through her handbag. The thought that there might be an emergency had occurred to her. She rifled through the small chattels and bric-a-brac curios and purse such-and-such, finally uncovering the small communiqué device which had defeated The Tower of Babel and brought everyone out of the jungle into communication—the cell phone.

“Where do you live?” the Banker asked.
It was warm and the stranger removed his coat and flipped it over his shoulder grasping it with the crook of his index finger. “I live in a country far from here.”

“Europe?” the CEO queried, her phone now held in the palm of her hand.

“South America?” Another guess.
“No, not South America.” He swung his coat around, and folded it over his arm. “My country is Virginia.”
The CEO and Banker glanced at one another with both concerned and quizzical expressions. She waited yet, as to calling.

“Well, that isn’t so far. And why do you insist that your life is gone. Virginia is a growing, prosperous state, a credit to our Nation. It has roads, business, industry–great progress and science of course. Science has done so much for us; and it will do even more for your country, as you call it. You should have a fine life.” The stranger walked closer to the edge. The CEO opened her cell phone.

“I speak, as they say ‘in the abstract.’ My country is farther from me than I from it.”

“But how can that be?” the Banker asked. “How can one thing be farther from another thing. They can only be equally far; or equally near.” He glanced at the CEO. She returned the look. The stranger truly was serious, they thought. Again, just as well, as they were beyond their facility even if he weren’t.

“As I said, I speak in the abstract, though maybe I am in the wrong area of language. After all, I am not in my country and have little wisdom from which to draw from what I see across the scope before me. I was a farmer. But my land was taken from me for a factory. They said it was best for all concerned. They said it was progress. And they said that my remuneration would enable me to live a better life. But I told them that I only wanted my life. And I asked if the ‘remuneration’ had also purchased my soul? They did not answer. I don’t think they cared. They said that I should see some of the great progressive areas of the Nation. Then I would realize what my land would bring about when used best.” He inched slightly closer to the edge then with his free arm he waved it in an arc pointing across the land of structures and smoke before him. “They said that I should spend some money on a trip to some of the great progressive places and look out over the breadth of them, and then I would see and understand what I had not comprehended before. I know now that I am very far from home; that the progression that is before me exceeds my ability to grasp its reality.”

He focused on the CEO. “Is that one of those portable phones in your hand?’

“You carry it everywhere? Why?”

“Really. You believe you can call God with a device?”
He stepped back a bit, then lifted his head as if toward heaven and in a soft, ordinary, baritone began to sing:

I heard the voice of Jesus say,
“Behold, I freely give
the living water; thirsty one,
stoop down and drink, and live.”
I came to Jesus, and I drank
of that life-giving stream;
my thirst was quenched, my soul revived,
and now I live in him.

I heard the voice of Jesus say,
“I am this dark world’s light;
look unto me, thy morn shall rise,
and all thy day be bright.”
I looked to Jesus, and I found
in him my Star, my Sun;
and in that light of life I’ll walk
till traveling days are done.*

The CEO stepped away a few steps. He is a madman, she thought. First talking about his life being over and gone, then babbling some Jesus song; though he did have a pleasant voice.

The Banker had backed away, too. Someone, this peculiar might be one of those hicks who believed in snake handling and such. He didn’t want to be close to someone like that so near the clouds. He thought that the stranger was clearly muddled; clearly absent of clear and modern thought; unaware of Ockham’s razor–lex parsimoniae. He was making complications of life needlessly or he was insane. Didn’t he know that land is to be used, not worshiped; it was to be maximized not nurtured: this fool in a rumpled brown suit; a throwback to medieval craftsmen or 19th century agrarians. Perhaps like Amish priests: localized morons trying to live somewhere that wasn’t anymore. Progress and land were for the world and the thinkers; not for simple-minded wretches who could not perceive enhancement. Certainly, they should share the prosperity. They would receive their trickle, after all: progress.

The stranger removed his glasses, wiped them with his handkerchief and placed them back on. As if a mind-reader, he spoke: “I know nothing of cognitive relativism or moral relativism. I know that you and your people believe in Turing machines. I believe in my land and my country. Because I have lost the first, I have given up the second. He put his finger under one of the lens of his glasses as if to wipe away a tear. He dropped his coat and stepped on the ledge. He stepped away. The CEO dialed 911. God…