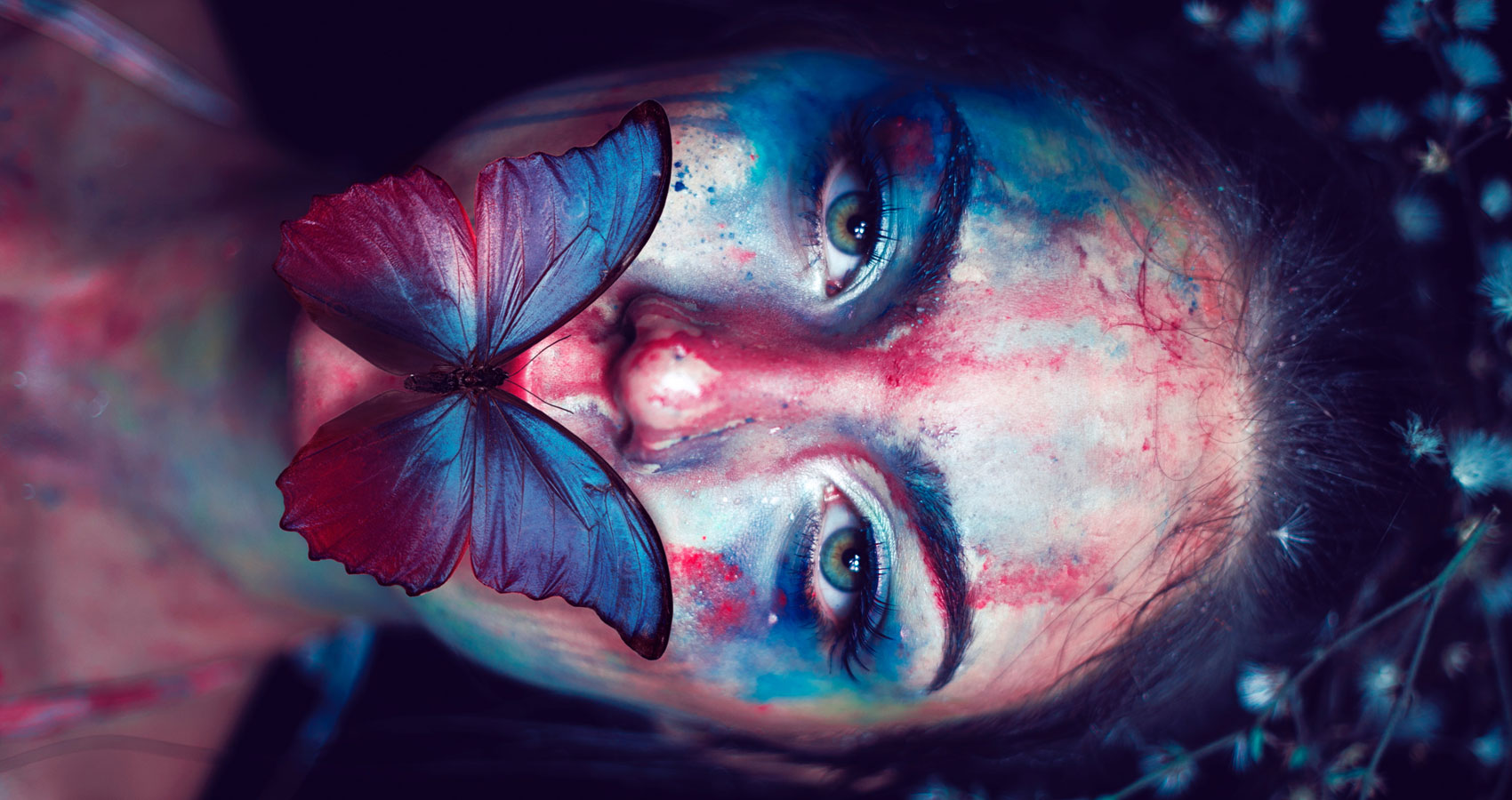 Hello. I know who you are.

You are the girl with everything.

Everything from good to bad;

From winning to losing;

From being a saint to a sin.

I recall everything from you.

Here is the story:

You grew up wanting to live your life,

But everything went downhill

When your cousins were abusing you,

Both physically and emotionally

And they went as far as

Locking you inside the closet

Or worse, locking you out of your own house.

They did all that while

All the adults were out of sight.

You have been keeping this to yourself

Because you were afraid of the consequences

You may receive if you snitch on them.

In fact, you have the worst one,

The one who has been pushing you

To the floor and screaming at you,

And even attempting to break your bones;

There was a time when

You were on the trampoline with her

And she went as far as nearly

Breaking your back in half… on purpose

While she was jumping on top of you.

You never told anyone in your family

About the abuse, you suffer from her

Because she kept getting away with it.

Growing up, you despise her so much

For underage drinking and smoking and drugs.

You hate her so much that you want her to die.

Shit became worse when you were in school

Starting from the first year you went there.

You were so quiet and mute,

Because you are traumatized at home

From when you get punished for things

That weren’t even your fault,

Even though it was their fault, not yours.

As you were in the classroom,

Kids have bullied you for being mute

And not knowing what to do during lectures.

They would vandalize your work on purpose,

They would push you down the stairs on purpose,

They would pull down your seat

While you were still sitting on it.

To make matters worse, your teachers

Have become your worse enemy;

Bigger enemies than your classmates.

Your teachers would abuse you,

Both verbally and even physically

As they scream and curse at your face,

Nearly breaking your arm as they pull you,

And even giving you bumps on your head.

You would come home with tears and bruises and cuts

And you would lie to your parents that you fell.

You even had special teachers

Who were supposed to help you

And instead, they intentionally

Hurt you until you cry,

Just because you are only thinking

And try your best to read and write.

One of them went as far as

Throwing your notebook off your desk

Just because of only one single wrong answer.

It wasn’t even your fault;

You just wanted to learn independently without help.

Not to mention, as years pass by,

Both classmates and teachers became

Bullies to you, just for being you.

They hurt you and you wanted to hurt them back,

But you couldn’t because of the consequences.

You even had a lot of anger issues

Because of what you went through

Because of them; you had to seek help,

Because of them. It’s not your fault.

Back home, when you were only ten,

You ran away from home

Because you caught your parents fighting

And your mom wanted to leave the family.

You claimed it was your fault when it’s not.

You cried as you slept on the streets for one night,

With nowhere else to go to,

Until your parents found you the next day.

Luckily for you, they made up

When they noticed that you were missing.

When you were thirteen,

Your dad had to leave the country to work

And you were dead-ass depressed

Because you’re known as a Daddy’s Girl.

You were so lost without him,

That your anger combined with sadness worsens.

He even missed your thirteenth birthday

And until he officially returned to the States,

All you had left of him were gifts he gave you

Prior to him leaving the country for a few years.

While your dad was away,

You and your mom didn’t live well

As both of you kept fighting

And she threatened you to leave the house.

You were almost homeless at that time,

But it wasn’t even your fault

That you couldn’t control your anger and pain.

But then, you and your mom got along stronger,

Even when your dad came back home.

However, while they were away for many weeks,

Or maybe a couple of months,

They had to go somewhere for work,

And while you are still a baby,

You were forced to live independently.

You had not enough money

And not enough food at home.

You were so hungry and broke,

And you nearly made yourself homeless

Because you couldn’t take care of yourself.

What’s worse is that you had no one else

To take care of you for a couple of months

Until your parents came back home.

And that was the first year when you changed.

You wore Goth and Emo clothes,

And heavy black makeup, as well as

Listening to Rock and Metal Bands you love now;

You love Evanescence, Within Temptation and Lacuna Coil,

And even Linkin Park, Story of the Year and Three Days Grace.

You would listen to them all day long;

As others hear you, they would mock you

For what you love the most.

They tease you for being dark and scary.

They even tease you for reading Twilight.

But then things went wrong when

Everything has happened the same:

Your classmates have bullied you,

This time for being you.

Your emotions worsen when

You started forcing yourself to stay thin.

I remember you fasting and starving yourself;

And refusing to eat foods during lunchtime.

Girls your age would notice you

And they have harassed you for what you’ve done.

They mocked you, causing you to cry more tears.

You even hated your own classmates

Because you believed they are fucking stupid

And you have an IQ of Einstein and Curie.

Whenever you hear them talk,

You just wanted to murder them.

Also, this is the part where

You did something horrible to yourself.

You would sneak something sharp in school

Despite the strict security detectors

And underneath your desks,

You would cut yourself on your forearms and wrists.

Your classmates even noticed your actions;

They are either careless… or concerned about you.

When you got home, you found out

That your teacher called the counselor

And the counselor had called your mom.

Your mom is deeply worried about you

As she was checking your cuts and scars.

She wanted you to promise to never do it again,

And you did. However…

The promise has been broken when

You kept sneaking the blades to your school

Up until college, and you would keep

Cutting your own delicate, fragile skin.

You have been reported to go to counseling

And then therapy. And that’s not even it:

You had to go because of your frequent thoughts.

Ever since the start of high school,

You have been having these thoughts of suicide

You were so depressed everyday

And your anger and impetuousness have worsened.

That’s when you realized in the clinic,

That you are diagnosed with

Misdiagnosed you as bipolar, even though

You didn’t suffer any mania

And he put you on strong meds that you abhor.

When you went to a different psychiatrist,

He had put you on new meds to help

With your anger, depression, and

Even the voices in your head.

Still, it wasn’t enough; you went as far as

Drinking at underage and abusing pills

Just to put the pain away.

That wasn’t even the first time you drank.

You first starting drinking at sixteen;

You would drink before school and

All that alcohol made you even angrier.

As years pass by, you continue to

All while nobody’s looking and nobody’s home.

By the time you reached that year,

When you admitted more that

You want to commit suicide,

You were forced to be sent to the ward.

You stayed there for almost a week

And you hated it there,

Because you felt as if you don’t belong.

But then, you made it through

Once they found out that you are sane

When you retook your meds.

Once you came home,

You vowed to never do such a thing anymore.

As of now, you overcame everything.

You got tattoos to help you stay strong.

You remind yourself to avert from any mental damage.

To help those who have gone through

What you have gone through.

Now, look at you, you’re now sober and strong;

No more purging and starving,

And no more suicidal thoughts and threats.

As the cherry and sprinkles on top of this ice cream,

You even went as far as

Coming out of the closet as bisexual

After all these years of hiding since childhood

Because you worried of being harassed

For loving both guys and girls.

That never happened, and you stood up

For being who you truly are

And they have accepted you for being you.

You are no longer a caterpillar.

You are now a butterfly,

And butterflies don’t just fly away,

They wilt to the ground before trying again.

That’s what you are now.

And there’s something you should know:

Not only I admire you for being you…

We are one in the same.