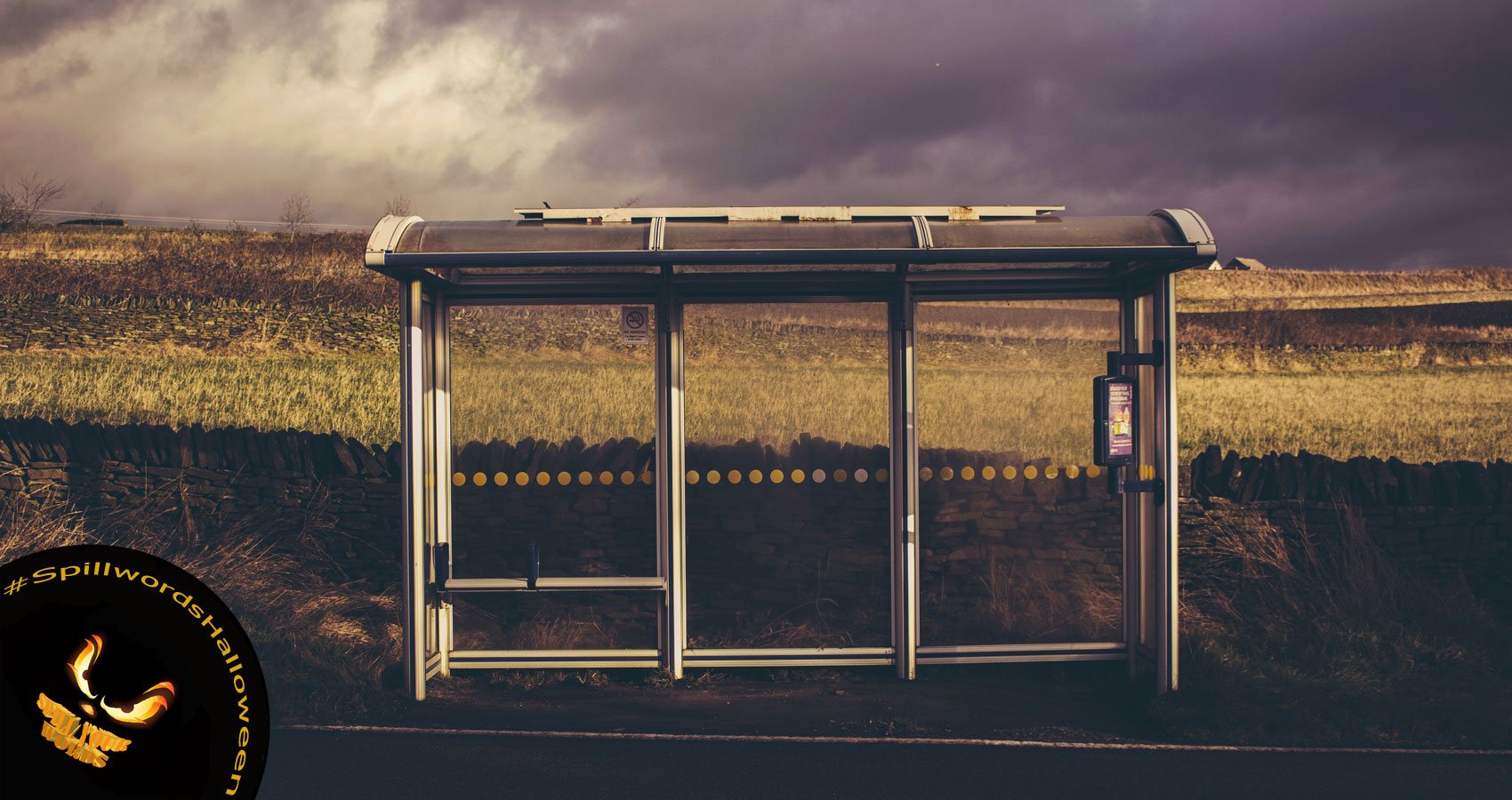 Rob’s car had been written-off in the crash, so we had to catch the bus. Thick haar had been blowing in off the sea all day, wrapping itself around the town like a damp bath towel. Now that darkness had fallen, you could barely see your hand in front of your face.

What had seemed like a good idea at the time, didn’t seem so clever now as we waited at the top of the hill. Exposed to the chittering wind, we shivered in our thin clothes, and tendrils of fog licked at our faces like a badly-behaved dog. Then it appeared, as if from nowhere, yellow and bug-eyed, lumbering through the mist, luminous orange indicators flashing as it pulled to a stop. With a swoosh, the bus doors opened, and we were sucked on board.

‘Two to the Graveyard, please,’ said Rob pressing his card against the reader. The stop’s official name was St Nicholas Kirkyard, but the locals all called it the Graveyard. We were off to ‘Revelations’, a deconsecrated church that had taken on a new lease of life as a pub-cum-disco. They were hosting a Halloween party.

‘I hope you’ve got a license for that,’ I said to the Devil in the driving seat, nodding to the pitchfork propped up in the corner of his cab. He snarled baring a row of ramshackle teeth.

‘Nice to see the driver getting into the spirit of things,’ said Rob as we made our way down the bus.

It was already full of revelers all dressed up for the occasion. Rob and I got the last two free seats in front of a couple of skeletons. People had really gone to town with their costumes. There were witches, a grim reaper, zombies, and a mummy. In fact, I couldn’t see anyone in ordinary clothes.

The driver picked up speed and we whizzed along, bypassing the usual stops. Puzzled, Rob and I looked at each other. We weren’t the only ones. What had been lively banter on the bus began to peter out. A feeling of general unease descended.

‘Ring the bell!’ a voice chimed out. Several people did; it made no sound.

‘Driver, you’ve missed the stop,’ called someone else to no avail. The bus sped on.

A zombie stood up and tried to limp his way down the aisle. Quick as a flash, the Grim Reaper shot out a spindly, white arm and pushed him back into his seat with surprising force. By now the bus was silent.

At last a destination appeared on the indicator board: “The Boar’s Head”

‘Where the hell are we?’ whispered Rob.

The bus slowed and the Grim Reaper made his way unsteadily to the front, hampered by the scythe swaying precariously at his side.

‘No shit, Sherlock,’ I replied with more levity than I felt.

Contrary to expectations, the Reaper didn’t get off when the bus pulled into the side of the road. Instead, he delved into the folds of his flowing robe, took out a scroll, and unfurled it with a flourish.

‘Ewan Davidson,’ he called, looking down the bus. Not a soul moved.

‘Ewan Davidson,’ repeated the Reaper with growing impatience. A large, slow-moving figure made its way forwards, avoiding eye contact with the other passengers. It was the mummy.

‘Stop!’ ordered the Reaper holding up a bony hand.

‘Ah, Ewan. You like a good feed, don’t you? Meat, two veg, roasties and plenty of gravy … Then maybe a little snack to keep the wolf away from the door; another slice of pie; or just a ‘wee one’ for the road. All washed down with a few half-hearted protestations, “Oh, I couldn’t possibly, oh go on then, if you must; twist my arm …” Story of your life Ewan, eh? So, I have a little treat lined up for you: roast pork and all the trimmings. You’ll be stuffed! Off you get, you greedy pig.’ Sneering, the Reaper gave Ewan a mighty shove off the bus and into the night. The doors hissed closed and we moved off, the headlights sweeping across the sign of a country pub: a roasted boar’s head with an apple stuffed in its mouth.

By now we were all beside ourselves, wondering what fate had in store. As it transpired, Rob and I didn’t have to wait long to find out.

Rob, already pale as a sheet, blanched visibly before getting slowly to his feet and making his way to the front.

‘Robert Mackay, you’ve got a nasty temper, haven’t you? Always losing your rag, lashing out … you can never turn the other cheek, can you Rob? You don’t mind if I call you Rob, do you? Just can’t let things go, Rob, can you? There’s no forgive and forget with you is there? Always need to get even, get one over on the other guy, get revenge.’

I don’t know how Rob felt at that point, but my blood ran cold. I was hit by a horrible clarity. It all came rushing back.

We’d had a row Rob and me, in the car. Rob had lost it; put his foot down; full throttle round the bend; veered out of control. We rolled over and over, plunged down the embankment. I could see the whole thing in my mind’s eye as if in slow motion … It was my fault, you see. I’d been shagging Rob’s missus and he’d found out. Came round to mine on the pretext of taking the car for a run but really to have it out with me. Now there’d be hell to pay.