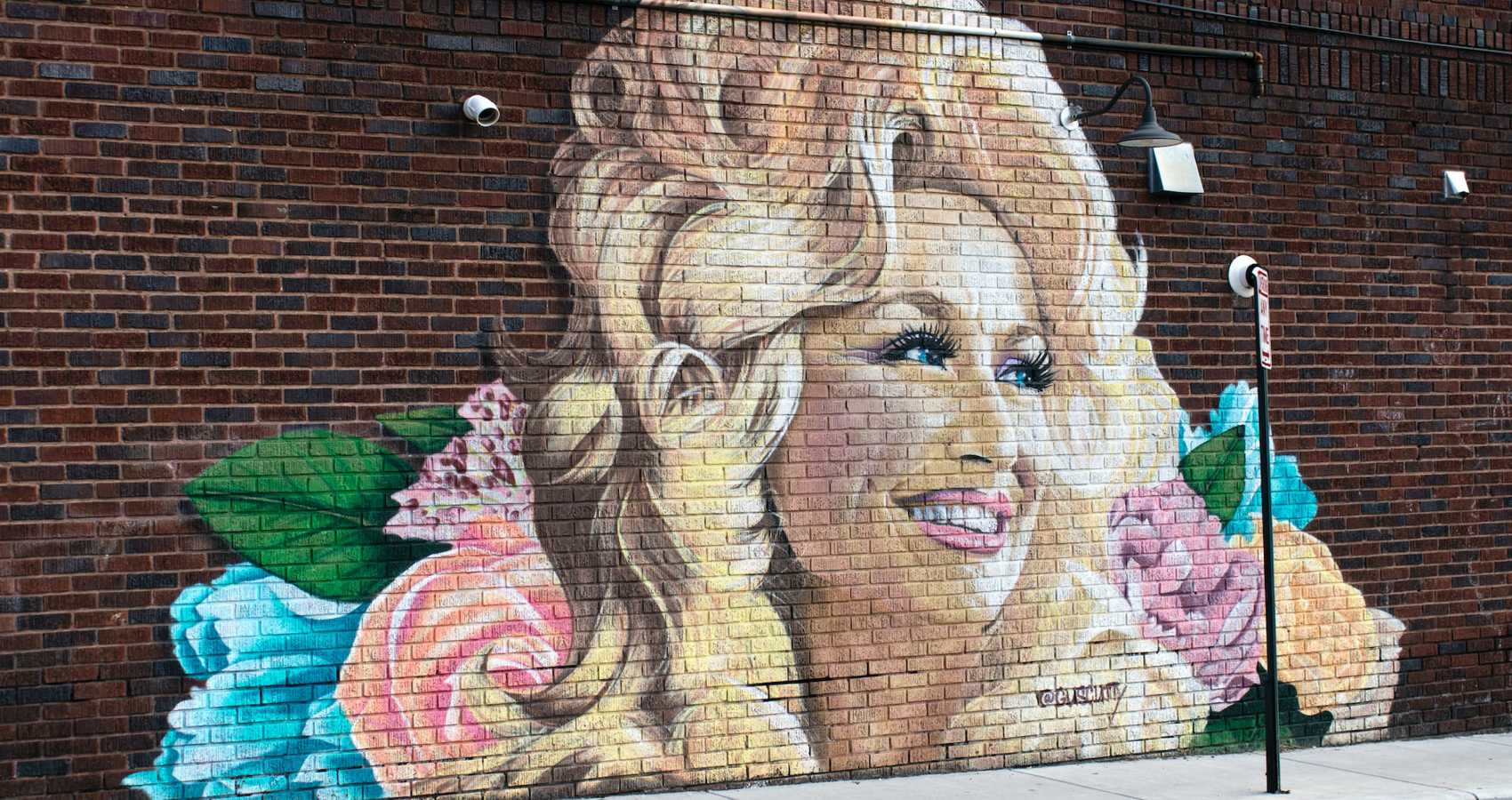 Of Rhinestones and Chamber Pots: A Love Letter to Dolly

Of Rhinestones and Chamber Pots:

A Love Letter to Dolly

The interior of Dolly Parton’s tour bus, parked in front of her DreamMore Resort and Spa next to Dollywood in Pigeon Forge, TN, is an understatement in a dynasty of overstatement. She called it her “gypsy wagon” and the décor is bathed in the rich hues of jewel tones; amethyst, fuchsia, burgundy, and gold. There is a gypsy mural adorning one wall, and lots of fringe and tassels. And, yes, it has bling, but it is far more subtle than one might imagine. Apparently, Dolly wanted a more calming place to spend most of her time between 2007 to 2022, known to always stay on the bus while on tour, and even staying on the bus when she visited her own resort.
And how do I know all this? I happened to be the lucky recipient of a dream-come-true Christmas gift from my husband, who had discovered that Dolly’s tour bus had recently been retired and opened for guest-stays.
I became a fan of Dolly when I was a little girl and my Dad and I would watch her on The Porter Wagoner Show. I liked Porter’s sequined, filigreed jackets, but I fell in love with all that was Dolly Parton. On the surface, undoubtedly, I was taken by that blonde bee-hive, the make-up, the voice, the everything-ness of Dolly. But somewhere lurking underneath all of that was the implicit understanding that Dolly knew exactly what she was doing with her big hair and boobs. She was unapologetic in a world where saying “I’m sorry” came almost as naturally to women as “excuse me”.
There was another reason I connected to Dolly. Every summer our family drove across Arkansas and Tennessee in our giant green Chrysler to visit our grandparents in their small town in the mountains of East Tennessee. We would always visit my great-aunt who lived in the rickety mountain house my grandmother and her six siblings grew up in. Mom would talk about dreading having to go for her weekly spend-the-night, because there was no indoor plumbing and she had to use a chamber pot. Because of this history, I felt a certain kinship with Dolly. I knew her landscape.
In the Ozark Mountains of Arkansas where I grew up, Barbara Lineberger seemed the closest I could get to a real-live Dolly. Barbara typed my Dad’s book manuscripts, and I would always go with him to her house down the street to deliver book chapters written on legal pads. Barbara had the blonde bee-hive, was beautiful, and smelled good, as did her kitchen where she seemed always to be cooking something delicious. In my house, we valued the practical things; like work-ethic, productivity, and higher learning. There was not a lot of importance placed on the art of applying make-up or even looks in general, unless it was as means to an end. The idea of freely wearing, being, and doing what you loved felt a bit foreign, and certainly illicit. By going to see Barbara with Dad, I felt I was somehow in closer proximity to that ideal.
Fast-forward forty years and I am on the tenth row of a Dolly concert in Ft. Lauderdale, FL. Neither of us have aged, since once the music begins we are both magically thrown back to the age when I first saw her. She plays a myriad of instruments, as she says “not well, but I can play enough for show”, including the obscure pan-pipes. She holds the audience in the palm of her hand. And then, ten years after that concert, I am sitting in front of her vanity mirror on the dainty plum-colored silk vanity seat on her bus.
While we had been to Dollywood before, we had never stayed at the resort, and one of my particular pleasures was listening to the employees’ “Dolly stories”. It seemed almost everyone had one, you just had to ask. We heard how she came every year and patiently stood for hours at the annual Christmas party for whoever wanted their picture made with her. We heard one employee say he held the door open for her at the end of the twelve-hour-day she’d had, and she took the time to ask about him and his family. Our bus driver said “you better not say nothing against Miss Dolly around here, unless you want an army comin’ after you”. No story I heard seemed to be able to tarnish the already elevated image I held.
Whatever you think of Dolly, with her carefully curated persona and her intensely private world of contradictions, I will always remain a faithful and stalwart fan. While my exterior might suggest more middle-aged book-club host than Dolly Super-Fan, I am confident in myself in ways that only years of living can provide. I no longer apologize for taking up space on the planet. In fact, Dolly, in my space it rains glitter in celebration of who I have unabashedly become, because I’ve kept my eyes on you.

Ellis Elliott is a writer, teacher of ballet, and facilitator of online writing groups called Bewilderness Writing. She has a blended family of six grown sons and lives in Juno Beach, FL. She has an MFA from Queens University, is a contributing writer for the Southern Review of Books, and editor for The Dewdrop contemplative journal. She has been published in Signal Mountain Review, Ignation Literary Magazine, Literary Mama, OPEN: Journal of Arts and Letter, Plainsongs Poetry Magazine/Award Poem, Sierra Nevada Review, Women of Appalachia Project Anthology, Delmarva Review, The Rail, Spotlong Review, Euphony Journal, and others.