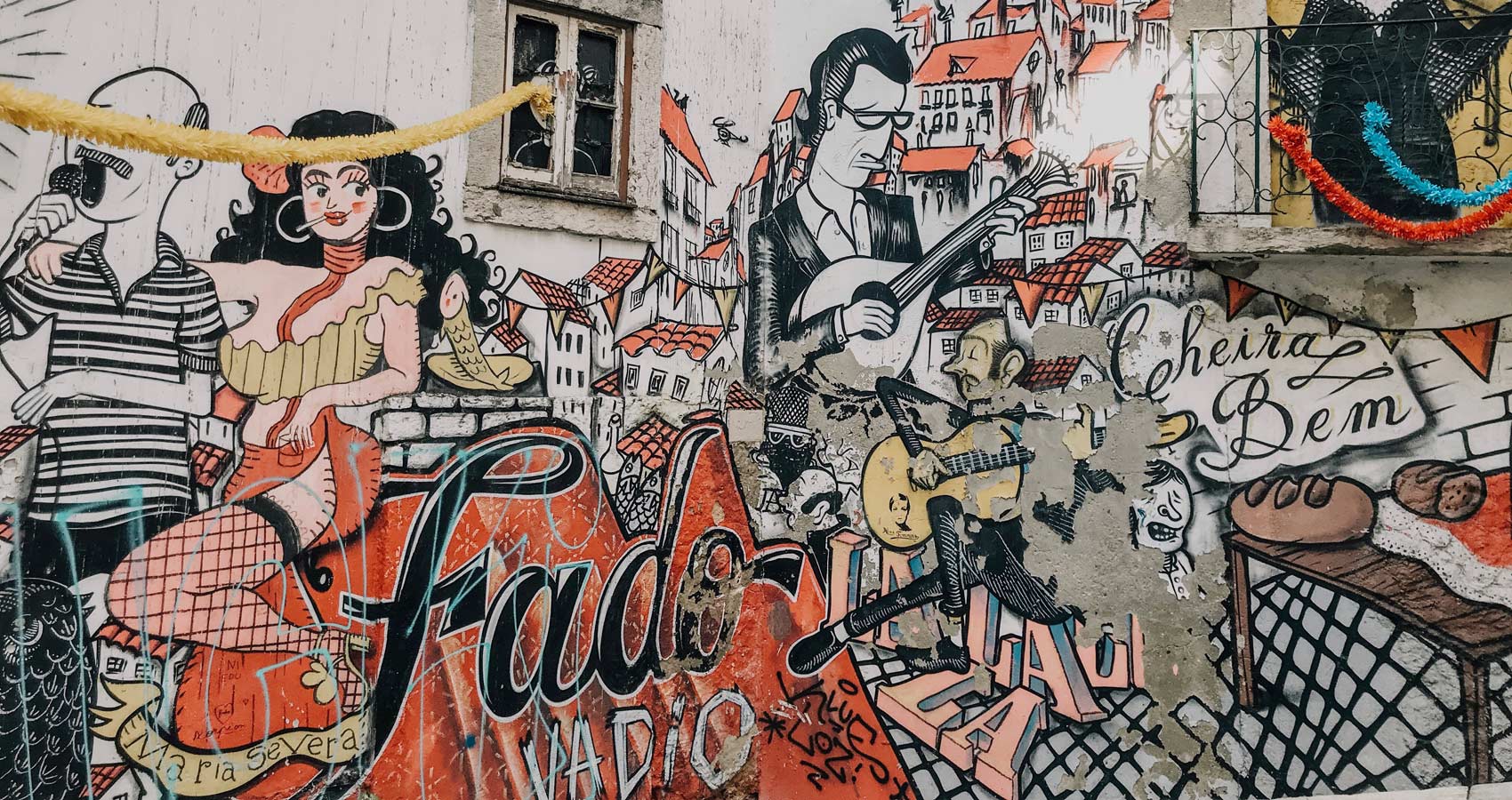 Paula’s dark irises focussed on me. Her enthusiastic intelligence made you forget how young she was. Speech from her inflated lips caused maximum fascination.

“We’re seeing Fado tonight,” she said, “in the best Fado place in Lisbon. The best Fado singer is singing there tonight. I made the reservation weeks ago.”

A barman poured a shaken container’s contents into glasses that a waitress in black distributed, her glasses’ red frames matching the bar’s red seating. A microphone, speaker and chair sat on a red stage. The singer’s appearance on that red, with her guitarist, created hailstone applause. Having recently seen the Rolling Stones performing in a bar in London, I had zero expectations.

Paula claimed Fado epitomised cultural excellence; so we were seeing Fado. What choice is there if you get commanded by beauty?

The singer’s voice matched its owner’s volume, her round arse, exploding from a narrow waist, causing steam to rise from my cerebral hardware. She wailed as if unimaginable tragedies had besieged her. Violent upheavals are irrelevant in comparison to your football team winning a title, your wife’s death infinitely more tragic than genocide.

She howled like a wounded animal. Had everyone in her village been slaughtered? Decapitated donkeys left in lakes of blood on chalk tracks? Girls raped by oily-faced fiends? Widows’ black dresses ripped off and dick shoved up voluptuous bottoms?

Paula’s uncle, Luis, saw my cheeks twitch with suppressed laughter. He was the only person not facing the stage. The reason for that became apparent when he leant towards me and said: “I hate fucking Fado.”

I leant across the table and said: “I know what she’s singing about.”

His blue eyes became polished opals. I didn’t understand Portuguese. Luis had blonde hair. He didn’t look Portuguese. Being one of the few Portuguese who hated Fado, his physical appearance was therefore appropriate.

His lips, expanding expectantly, expressed hope for something ridiculous.

“Her self-esteem,” I told Luis, “got shattered when some broken-toothed bandit told her to hold a donkey’s head while he fucked it. ‘Make sure this hunk of four-legged flesh doesn’t bite me, you ugly bitch,’ he told her, as he shoved it up the donkey’s arse, the donkey’s teeth exposed as it howled, its head locked by the only virgin left in town.”

Luis laughed, Paula and her bitter cousin staring as if I was a devil polluting innocent minds. Even the singer got distracted from her pretentious misery by the inexplicable guffawing cracking on the privileged table near her feet; the two non-Portuguese-looking men below her, howling out gob-widening laughter, shoved uneasy surprise into her previously miserable eyes. Maybe now she understood tragedy?

Outside, Luis said: “That was wonderful.”

His opal slithers shone like stained glass. Paula refused to look at me. She said goodbye to everyone except me, the insult in Iberia. She walked away, a princess engulfed by her admiring entourage, a human amphorae vase, no surprise that classical architecture emerged around the Mediterranean, symmetrical perfection having already been achieved long before the first stones got laid. Paula could do whatever she liked. She would never suffer the same fate–the same Fado–as my imagined singer. People free from castigation can believe. Their opposites must learn. Believing is practical if ignorance doesn’t impede success. You can shower appreciation upon the ideals you wish to glamorise.

She disappeared around a corner, her courtesans like hangers-on around an aristocrat. The courtesans, under instruction, had been waiting for her outside the bar, their hair, even in the subdued light, emanating electrifying sensuality.

“She wasn’t happy with us talking,” Luis said.

“And laughing,” I replied.

Cobblestones gleamed like teeth in a grey, smiling face, the soundless street illuminated by yellow lights.

“Everyone loves her,” Luis said. “She’s got everything, so she glamorises tragedy, the one thing outside her experience.”

“Maybe she adores herself so much,” I offered, “that what she loves must have universal significance?”

The next day, when I said that “Luis loved last night’s comedy club,” she yelped: “That’s the sort of stupid comment I expect from you.”

Fado exceeds real suffering, Paula’s glaring disproportionate to my flippancy. Real tragedy lacks poetry. Try seeing a tank crushing a man. Because I had been irreverent towards Fado I deserved instant death. I had committed the gravest of sins, genocide nothing in comparison to my brutality, for I had mocked Fado! I deserved to be stomped on by the brontosaurus of justice, crushed, like the mite I was, by the iron heel of pertinence. How could anyone treat the highest of all pursuits so cavalierly? I was a disgrace to civilisation.

“Is Fado more important than millions dying in disasters?” I asked.

“What’s that got to do with someone behaving like an idiot?” she asked.

She had a wonderful face. Things new or surprising could light that face up as if it was the universal catchment point for everything extraordinary. Her smile created a lightness of mind that stimulated creativity, her hair as black as a raven’s feathers, her fleshy mouth seductively askew, her cheeks’ red flush beyond what satin manufacturers will never achieve. And she couldn’t stand me.

“Do you get equally angry,” I asked, “when something important happens? Or is it just Fado that does the trick?”

Triumph, having been hers from birth, made her perspective as skew-with as her beautiful mouth. A wallop of unexpected perspective smashed her into silence.

“I didn’t realise,” I said, “that Fado was so monumental that someone’s value could be judged solely by how they reacted to its Shakespearean profundity.”

She tried walking away. I followed, determined to give a spoilt, egotistical bitch a hammering.

“The preservation of your glamorous self-perception,” I howled, “and the cultural tit-bits that reinforce it are much more important to you than real suffering. Including the suffering people sing about. Otherwise, you might find something else to get angry about. And did Luis and I say that we wanted to see, as he put it, fucking Fado?!”