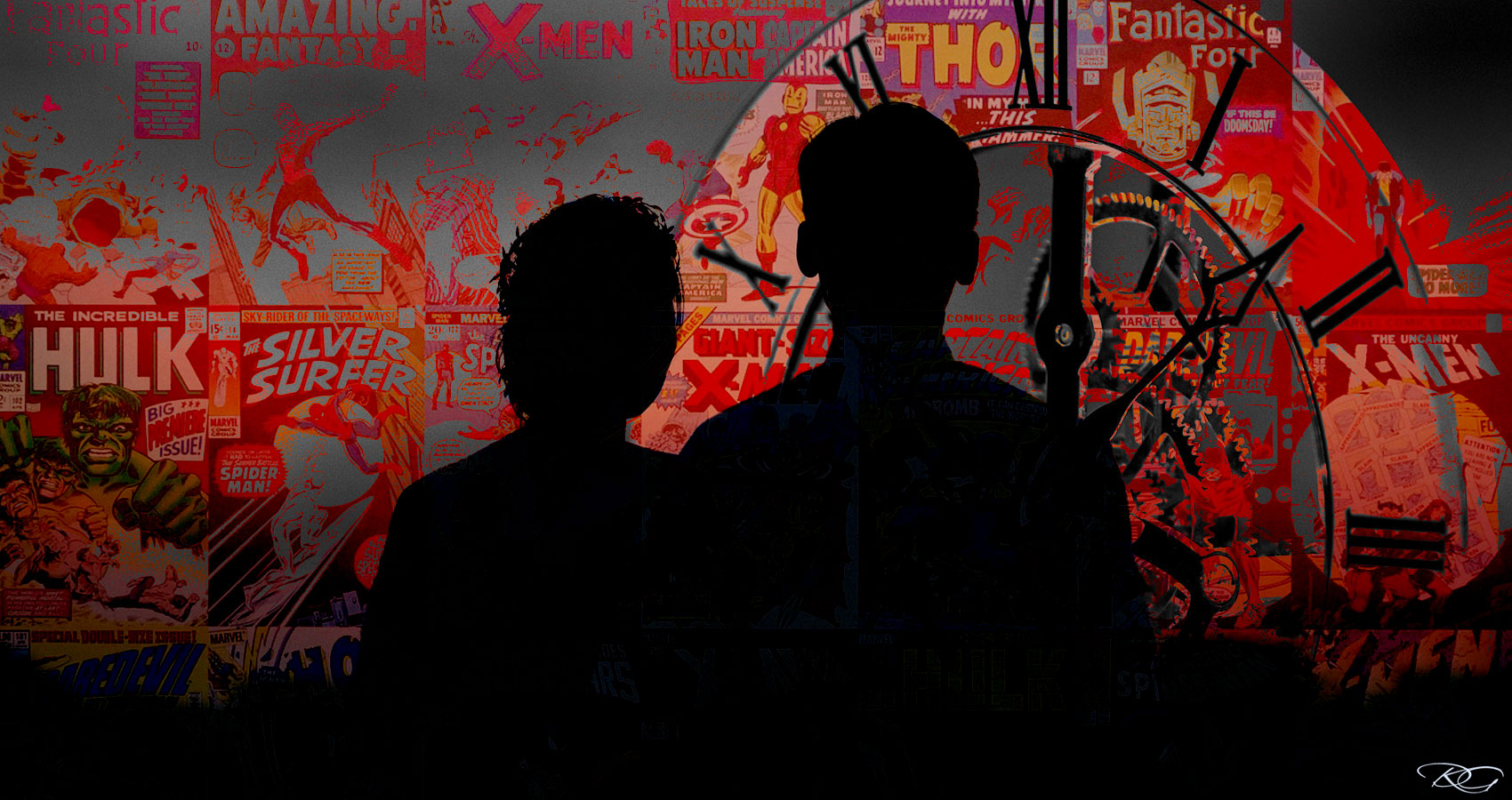 She and The Shrike

She and The Shrike

She met him at one of the numerous Cosplay gatherings thrown by the city’s Dark Fantasy/ Sci-fi group when in their early twenties. He was into Dan Simmonds at the time and had dressed up as a Hyperion Shrike, complete with the spikey headpiece. Which, made an immediate impression on her in more ways than one because it stabbed her in the nose as she turned to say hello.

She had been wearing a Boar Maiden costume complete with a helmet from some obscure Fantasy series, the Shrike headpiece spike had missed the nose guard on the helmet and drew blood. It was a unique way of finally catching his attention as she’d seen him five minutes and eleven seconds before and had asked her Night Elf girlfriend who the Shrike was. The Night Elf didn’t know and was more interested in a Cylon to pay too much attention.

So, after some casual furtive glances in the Shrike’s direction and one or two unsuccessful orchestrated near misses on the way to either the bathroom or kitchen or whatever was on the other side of the room near him, she gave up. Six minutes twenty-two seconds later she let the Night Elf use her as a wing girl to talk to the Cylon.

The Cylon knew the Shrike!

“Let me introduce you guys,” the Cylon said and left immediately much to the Night Elf’s short-lived annoyance because she soon saw a bloke dressed up as Captain Nemo. Night Elf dragged her away, again as her wing girl, and she lost site of the Cylon and hope of meeting the Shrike. But Captain Nemo also knew the Shrike!

His name was Kenneth and the bloody introduction was a mere four hundred and thirty seconds away.

After treatment on the injury and a thirty-seven-word profuse apology, her and Kenneth spent the rest of the gathering together, all two hundred and forty-one minutes of it. She told him she had tried to read Hyperion but gave up after ninety-four pages. And he told her he’d give the same commitment to the Boar Maiden series if he could find it at the public library.

That trip, to the library, was their first official date. They couldn’t find the Boar Maiden thing but settled on a Tad Williams fantasy that neither had read, although Kenneth mentioned he’d read a Faerie type stand-alone by him fourteen months sixteen days earlier. They read it together or at least the first ninety-three pages before the Shrike decided to try Military Sci-Fi in the New Release section of the library. She finished Tad in three days.

From then on, they talked or met daily, the longest they were without each other was forty-two hours. She told the Night Elf after three months or so that the Shrike was the one and she wanted to make him hers forever. The Night Elf cried and asked to be a bridesmaid. She laughed and said that marriage was not even in Kenneth’s vocabulary, he never thought about it not even for a second. Night Elf told her that all Shrikes were self-absorbed only concerned about pain.

She didn’t know Night Elf had just broken up with Captain Nemo.

Still she and Kenneth were good and eventually she asked the Shrike to marry her! One hundred and ninety-seven days after they actually spoke to each other for the first time. She said he was her soul mate and wanted him forever and he replied.

At which she punched him on the arm, with a smile on her face and he laughed and said.

“Okay but only because you are sure but the violence has got to stop.”

She laughed again and reminded him he was a Shrike and should be used to violence. They were married eighty-nine days after she proposed. Night Elf was a bridesmaid although the wedding theme was Steampunk and she looked decidedly un-elfish in a corset with metal filigree. Kenneth and his Boar Maiden sped through service and were signing the registry within half of one hour.

They knew they both wanted a family and she gave Kenneth sons and a daughter all within one hundred and five thousand hours after they first met. The boys grew up as excitable hobbits and their daughter quietly wished to be a princess and then Lara Croft.

They all left home for careers or education two hundred and sixty-four months later. The boys got into trans-media and podcasting, the daughter into three-dimensional modelling.

The Shrike and the Boar Maiden had themselves to themselves once more and loved it; traveling and dressing up for the next two thousand and four days. Anime and Military Sci-Fi Cosplay.

She was found by Kenneth on the kitchen floor nearly twenty-eight million minutes after they first spoke paralyzed down one side from a stroke. With fumbling trembling hands, he dialed the emergency services within seventeen seconds, the ambulance arrived nineteen minutes later.

As she lay in the ICU coming and going out of consciousness, he told her to hang on and she still was the prettiest Boar Maiden he knew. In one of her more lucid moments, she asked how could she be the prettiest like this?

And he replied. “Because love makes you beautiful.”

She smiled at him as he said this and in a blink of an eye, she was gone.

Justin (JH Jones) is a new voice in the... humorous/quirky mystical Sci-Fi genre, the hot new genre of the 21st century! His first book will make you laugh, cry, whoop in triumph and want to eat cake...Lemon Crumb cake... with Crème fraîche or yogurt. On occasion he’s also been known to dabble in short stories and poetry. He has a collection of poems in the works “The Ordinary Tinman.”