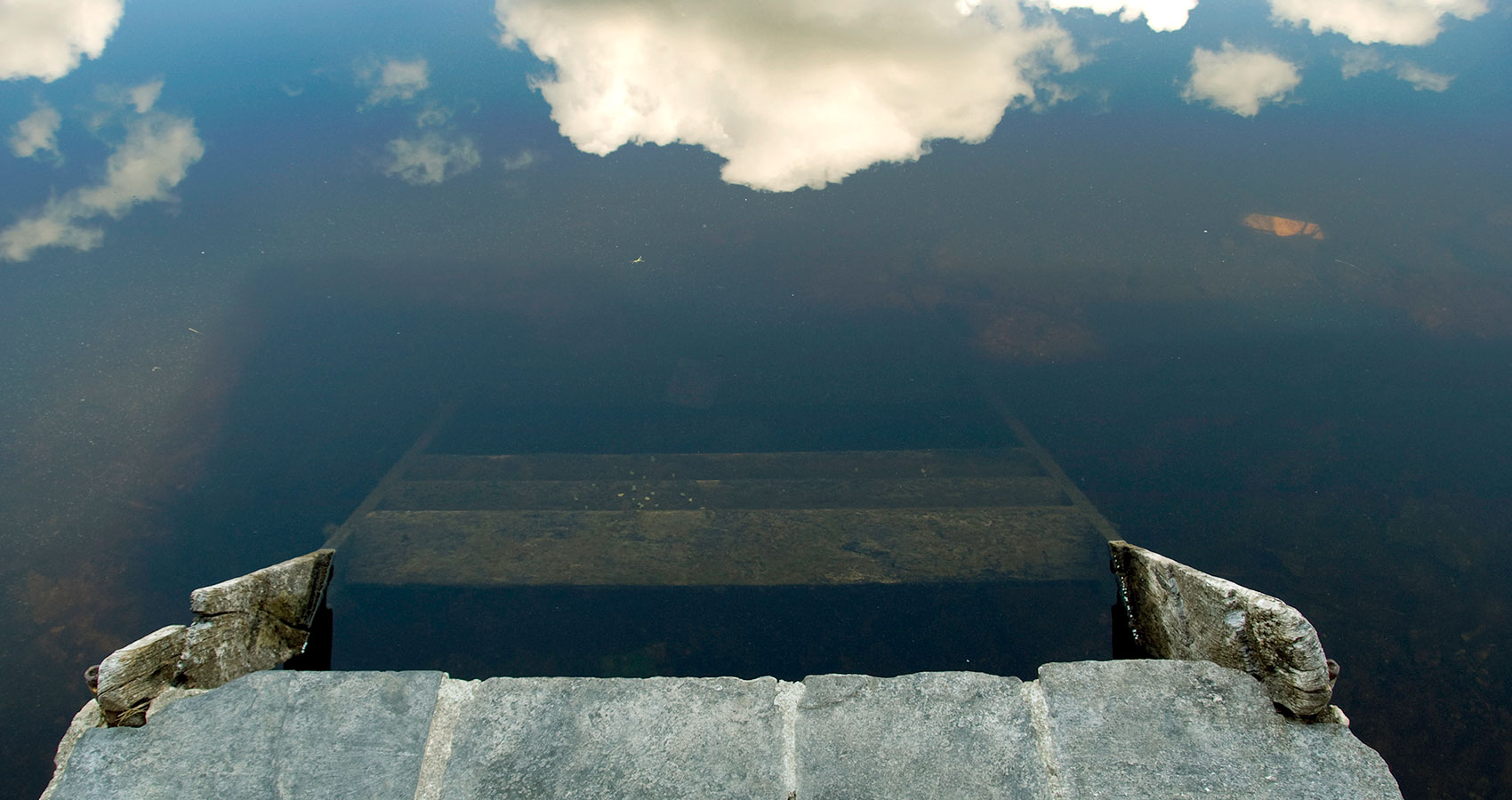 And so I run!  I take one stride after another as my feet sink into the fine sand with every forced step.  I felt 60 pounds heavier. I see Rudy going past me…He didn’t even turn to look at me…He was gone!  His fat ass flew down the sandy walkway about 50 yards to the staircase…he looked like a cartoon with that belly bouncing…I didn’t know he could run that fast!

He kept running up the first set of stairs…not a look back.  I’m surprised he didn’t throw something back at me so I could serve as something to do for the cop that was right on our heels.  I was so nervous, that every thought that made sense was replaced by reflex…a reflex to not go to juvy!

right leg, right hand, left hand – Is that a revolver?, I jump to the next step!  And right when I was in the air it clicked….

‘There’s a cop somewhere down there telling me to stop or he’s going to shoot me and I have a gun in my f.u.c.k.i.n.g. HAND!

I land on both feet, stop halfway thru the staircase on a step, between the beach and the street above.  So, I was now in the worst possible moment I could have ended up that day, probably within a gentle squeeze to death…

I slowly turn around and although I knew I had the gun in my hand, it didn’t dawn on me to drop it.  I turn enough to see this cop dressed in blue, one knee down on the sand, and his 9mil pointed at me.

My life flashed.  I knew I was dead.  I was on my own personal ‘stairway to heaven’.

Then like an unexpected gust of wind, all the memories of that day rush into my head:

That Saturday started like any other…hungover at age 16…part of my routine then.  Drink Friday nights and don’t stop til Sunday evening.  Well, there was a difference…  Rudy and I had gone joy riding the night before and foolio here actually made a sale on one of the Toyotas, so I had some money from that sale.

That was actually very rare because we would never sell the vehicles.  All we’d really do is take the car, see if it had any good CDs, throw out the ones we didn’t want out the window, drive for 3 blocks, stop the car, go walking and repeat.

It was more like a practical joke on car owners. Ha! I can only imagine what those poor people went thru only to find their missing vehicles parked 3 blocks away and left exactly like they had left them, except for the CDs…

The couple’s conversation when they found no car where theirs should have been:

“Honey…did you take the car out last night?, ‘cuz I don’t see it.” Babe would ask with a curious tone.

Then, Babe, confused, would answer “Of course not Honey”

“Why did you hide the car!?!? Parking it all the way down the street!?!? Did you go out with your other girlfriend last night and didn’t wanna be seen or make noise parking near the house in the middle on the night?!?! It’s that bitch from work uh?!?! Tell me now or imma kick your ass after I kick hers!!!”

“But Honey!!!” Babe would plead, only to be slapped with:

“Don’t you Honey me you cheater!”

Truth is we were doing it for the adrenaline rush…didn’t care much about the rest. Didn’t mean harm on anyone and never used any weapons… Just teens out of control having fun.

So moving on, I figured that morning:  ‘if I don’t spend that money on something, it’s going on beer, coke or chicks…’ none of those things worth it at the moment for me.  So, I decided to take my buck fifty and buy what every boy my age should have in the ghetto…
an authentic .357 Magnum Revolver!

It was a b.b. gun replica but it looked just like the real thing!

I call my friend Manuel that morning and he comes over with Rudy in his girlfriend’s car.  Now, it’s about 11a.m. and we head to the hobby store where I bought the gun.  I loved it! it fit like a glove in my hand.  It looked and felt like a real revolver… One had to be inches away to tell it was fake.

In the car now with gun and beer in hand, Manuel, Rudy and I start negotiating on where we would go to try out this gun and so I lead them to believe they had a say when I knew we were going to the beach all along.

We drove for a while…getting the right mix of fermentation in our bodies to get into trouble.  We were sooo good at that.

Now at the beach, with plenty of ammo and the gun, we start shooting away at the empty beer bottles ’til we were almost out of ammo and sure enough here came the proposition:

Rudy says:
“Damn I’m bored!.”  Too obvious… but me wanting the excitement as well, follow suit and blurp out: “Let’s go get a car Bro!”  He playfully pushes me and says: “What took you so long?!”

Rudy and I are off and Manuel stays behind with his girlfriend on the beach.  I take the gun with me. We start walking as I feel my head 3 pounds lighter from the beer and Rudy is only too happy to be thereabouts as well.

So…we head down the beach walkway which is a bit closer to the city street than the ocean…it’s a long walkway and to the left there are multiple stairways that lead up to the streets of Long Beach.

We go up the first set of stairs to look for our first victim and we find it… it’s a beige 4-door Volvo parked on the curve of a 5 story apartment building.  We had master keys for Toyotas and Nissans but I decide to try the keys and it opens the door!  As usual, I open up the passenger side and let my co-pilot in.  We were tight between two other vehicles and I needed to put reverse to exit that spot.

Now, if you are familiar with standard transmission Japanese vehicles, you’ll know that reverse is right-down.  Well, that’s not the case with European cars…which is left-up for reverse, so I couldn’t get out the parking spot….

I kept looking and grinding gears for that stupid reverse but all I kept hearing is mechanical farts coming from the tranny.

I’m at it for about 5 minutes and we start getting very nervous now as it was plain daylight and we were being loud!  All of a sudden, we see this rather tall man, husky, come out of the apartment building and head right toward us…

Of course, we think it’s the owner and within two car lengths of us, we bolt from the car!  We were NOT going to find out by getting beat if that was the owner’s car or not.

We run down the same stairs we came up on.  As we fly down, we start laughing because of course nothing bad ever happened to us and we just got away with it again.  We hit the sand and since there was no pursuit, we stop running and wait about 10 minutes.  Then, nothing’s happening, so we walk back to the walkway and pass that set of stairs we had just flew down on.

Who do we see looking down at us from the street as we pass thru?  Only the biggest darn cop in history with his arms crossed.  He’s sneering down at us with that ‘I got you little monsters’ look on ’em…

So, we go from there, to me being in a world of shit in this stand off as good cop and bad car thief face each other “The Old West” style…yes…we are…

The good, the bad…and that ugly fat ass Rudy gone!  Fucker left me there to die!

Now, at this moment, when all time stood still, that didn’t make sense to me right away….but when it hit, when I realized what was going on, I threw it so far…I don’t even know where it landed!

By the time I was at the first step and on the beach, there were two police helicopters (a.k.a. black birds back then), six beach squads, eight Sheriff vehicles and two city blocks closed off….all for lil ‘O me.

Later at the station, the officer would confide in me that he was mad and cursing at me not because of the car, but because I almost forced him to kill a kid.  He said he was determined to pull the trigger if I had shown any sign of aggression.

Officer, after all this time, I’d like to offer my apologies and thank you for not squeezing gently, for my not so gentle death…

This is a true life recollection and told as best as memory serves me.