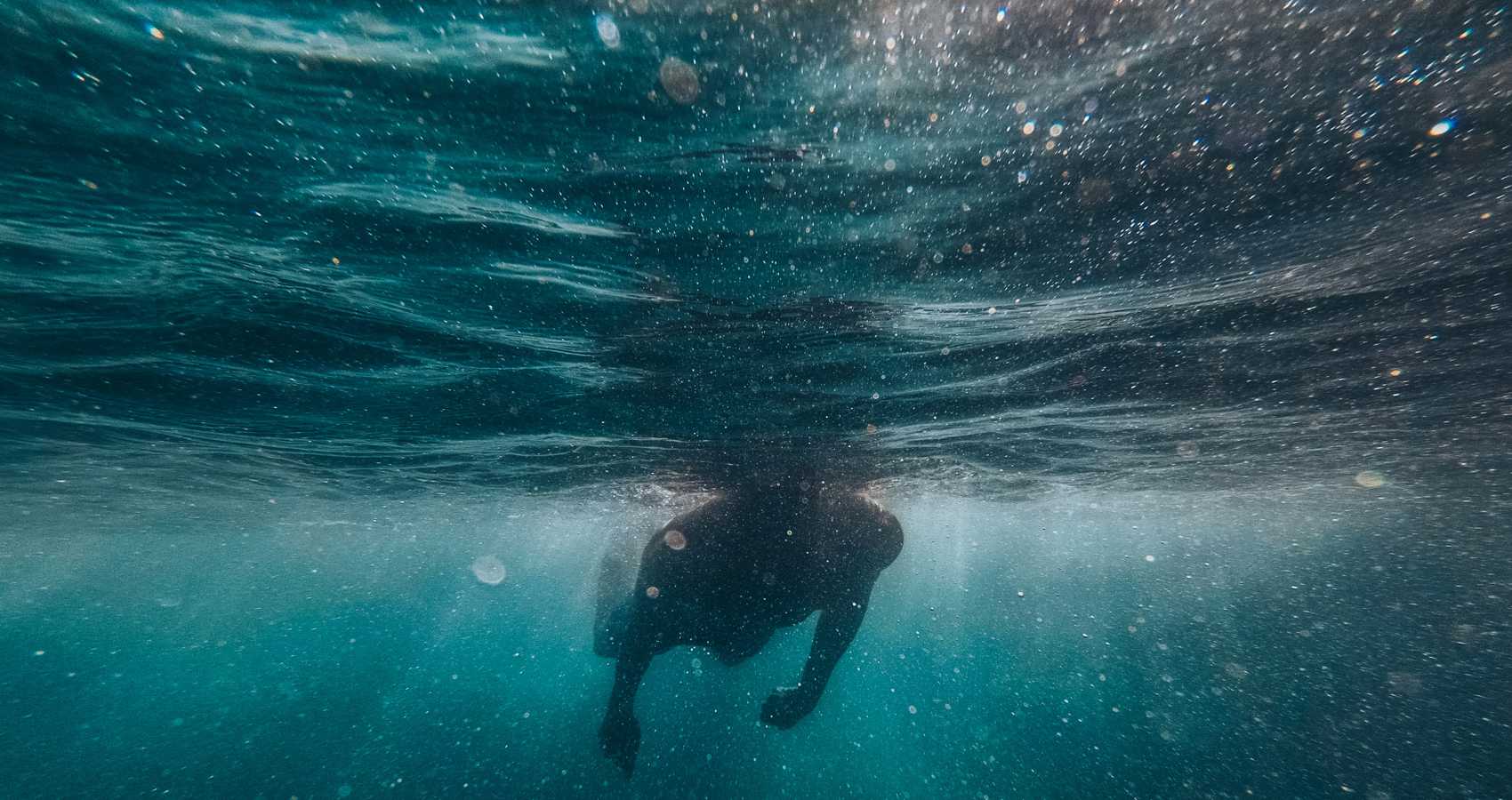 The Haunting of The South Pacific

The Haunting of The South Pacific

I had only been hunting for ten minutes or so but it felt like an eternity. The combination of severe starvation and freezing currents was taking an exponential toll on my body. I hadn’t eaten in days and was desperate for nourishment. The pale skin on my torso revealed the outer shell of my ribcage and chest plate. My legs dangled uselessly below the sea’s surface, my arms barely able to keep me afloat. The little muscle tissue that surrounded my bones was beginning to cramp and I couldn’t feel my feet. Emaciated and demoralized, I knew I didn’t have long.

I maneuvered into position for one last dive, but as I plunged under the oncoming wave, salt water rushed into my nose, forcing itself down my throat. A sharp sting penetrated deep into my nasal cavity, forcing my mouth open as I gasped for air. I resurfaced into a violent cough as my reflexes worked furiously to expel the moisture from my lungs. The onslaught of waves was relentless. A giant swell with the weight of a truck collapsed right on top of me, causing momentary paralysis as it dragged me down into darkness.

This time I traveled much deeper, my spine scraping the bottom as I tumbled along the ocean floor. I could hear joints cracking and ligaments snapping as the ocean toyed with my feeble skeleton. My right hand detected the absence of the spear it had gripped just moments before, and I felt a warm spot growing at my legs.

When I finally regained my bearings, I realized that the force of the crashing wave had driven the freshly carved wooden tip of my weapon down the center of my calf, splitting the meat in two like a butterflied breast of meat. Pain signals fired furiously as my brain registered the excruciating sensation of tearing flesh marinating in the salt of the sea. Overwhelmed by the elements, I conjured my remaining adrenaline and frantically paddled toward land, praying the tide would sweep me in before my muscles gave out. I washed up on shore like broken prey, signaling opportunity for passing predators. Blood stained the sand as it leaked from my body. Each passing ounce felt like pints as my veins steadily drained onto the open beach. I could feel the dehydration so intensely that the agony in my skull rivaled that of my unfortunate life-threatening wound. I struggled to remove my shirt, acting feverishly to stop the flow of blood from my gash. As I tightened the knot over my shin, a stream of warm red fluid shot onto my face and into my eyes. It felt like acid was eating its way through my sockets. I tried rubbing them but it only made it worse. Panic set in as my vision melted into a tinted blur. With the taste of iron on my lips, I licked what my tongue could reach in a futile attempt to replenish my supply and stay conscious.

I felt a pause in my pulse as my heart squirmed to process the abrupt loss in vascular pressure. My fingers twitched rapidly as my head repeatedly slammed into the sandbank. I tried closing my eyes, but couldn’t. My overgrown nails had cut my lids while trying to alleviate the horrible burning. I could only make out vague shapes and shadows until my pupils shot up, slowly turning inward to reveal the back of my eyeballs. They were ghost white and spotted with vessels on the verge of bursting. I began to shake as unfamiliar sounds echoed through my ears. Shivers quickly morphed into aggressive convulsions, robbing me of all control over my anatomy. I started to foam at the mouth, snorting and wheezing with each passing breath. My eyes jolted back to their forward gaze, bleeding from the corners to stay moisturized. My sight strobed in and out of focus until I made out the movements of something alive at my feet.

Comforted by what seemed to be the presence of another soul, I imagined the warm touch of another human’s skin on my body. But instead, a cold, heartless crab the size of a house cat crawled onto my ankle and began picking at my exposed calf tissue. I sunk further into despair at the realization that I was still lost and hopelessly alone. I tried to swipe at it but my arms wouldn’t move. I tried kicking with my other leg but I was too weak to ward it off. The crab, unfazed and unhindered, continued its feast. With its hairy, armored claws it dug its way to my bone, staring me in the face with its unflinching antenna eyes as he fed on my deteriorating muscles.

I screamed with all of my strength but not a sound could be produced. A faint sound-wave of snaps and clicks slowly made its way into my ears then rushed into my skull as a bushel of crabs converged on my barely living remains. They toppled one another like savages, crowding my leg and fighting for their piece of flesh. Noticing the blood on my face, one of them crawled onto my head and began clawing, ripping into my cheeks with every strike as I dipped, dodged, and shook my head. Determined to thwart its assault, I bit down onto the crab as hard as I could, nearly shattering my molars as my jaw cracked its shell. Sweet meat juice oozed into my mouth from its disabled claw, seasoned with salt sweat and blood. For the briefest of instants, I felt revitalized, relishing in the fleeting glory of momentary victory. But unable to bear the pain, my brain finally shut down as the rising tide pooled at my feet. Then I passed out cold. When I woke up, I found myself in the water again, floating like debris from a wreckage. The onslaught of waves was relentless, and a giant swell with the weight of a truck collapsed right on top of me, causing momentary paralysis as it dragged me down into darkness again, only this time deeper, reluctant to take me away for good, but refusing to return me to the land from which I had come.

Remy Dambron was born and raised in San Diego, CA, where he developed a profound appreciation for the ocean and the curative powers its shoreline views possess. He now lives and writes poetry in Portland, but once a month takes his wife on a 50-mile scenic drive to the ocean through the magical forests of the Pacific Northwest, where they soak in the sights and feels of Oregon's coast.