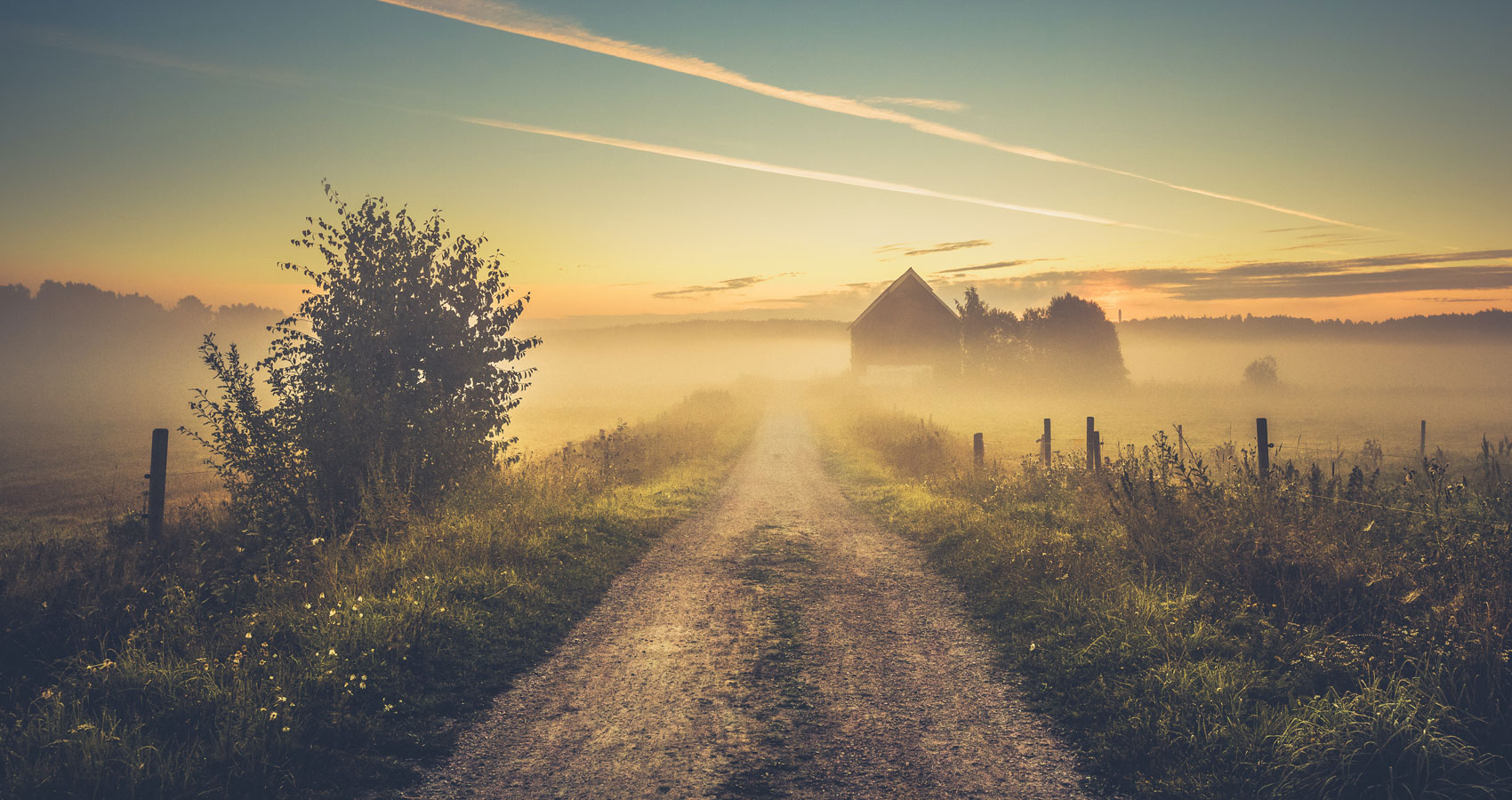 The Hermits of Locust Hill

The Hermits of Locust Hill

In those days Ridge Road was just as much gravel as the narrow lane leading to our farm. It would be another ten years before the county would get around to paving it. In the meantime, all that gravel made for a slow, jittery ride. A steady plume of yellow dust billowed from the tires as we went. I watched it in the side mirror.
Brad was a careful driver even though it was still a struggle for him to see over the pickup’s high set hood. If a small animal, or even a small kid, had darted out in front of us from the tall dusty weeds that lined the road, Brad wouldn’t have been able to see it. Still it wasn’t all that unusual for a fourteen year old to be driving on these roads. Farm kids—both boys and girls—commonly drove trucks and tractors from field to field in order to help get the work done. Most families around us had patchwork farms, with one field here and another down the road somewhere. So nobody thought much about kids driving on these roads. Besides, the police rarely came to our part of the county. Didn’t have any need to. Fact is, I was busting to get my turn at driving, too, which I anticipated even more fervently than Brad’s signal to start cussing. But I was still way too short to try. Seemed like cussing would come first.
After about three miles we pulled across the road into one of the turnarounds that farmers in our area used to stage their equipment for working the fields. Brad wheeled the truck clear around until we were facing the direction from which we’d just come.
“There,” he said, setting the emergency brake. “Now if ole man Cunningham or any of his people need to use this turnaround to mow their field ‘fore we get back, they’ll have plenty of room. Course, as early as we are, we’re lucky we didn’t wake up some teenagers still usin’ it for parkin’.”
“Parkin’? Why would they be parkin’ way out here?” I asked.
“Never mind. You’ll find out soon enough.” Brad threw open the driver’s door and climbed out.
“Is parkin’ one of those things like cussin’ that you have to get a signal for?” I asked, jumping down from the truck cab.
“Sort of,” Brad said with a smile as he slammed the driver’s door and walked to the back of the truck. “Here, you take the fishin’ poles an’ the bait can, an’ I’ll tote the picnic hamper.”
We lifted our gear out of the truck bed and set off down the hill in search of the fishing hole.

With the cool morning breeze retreating down the hillside to the creek, it was quite pleasant just to lie there and wait for a fish to bite—so pleasant that, half asleep, I pretty much lost track of the time–until I felt something warm and very wet on my cheek. I jumped up with a start, accidentally kicking the picnic hamper and sending it tumbling into the creek. It was the small coon hound licking my face! The dog jumped back from me and bowed while barking playfully. Before I could respond to the dog, I heard another sound—the deep boom of a big man’s voice.
“What the hell you boys doin’ here?” It was the hermit, standing behind us, looking even taller than before, and now cradling a shotgun in his arms. The bigger hound was seated at his feet, adding a few barks and growls of its own to the little one’s ruckus. .
Brad bounced up like a jack-in-the-box on a swivel, shooting up and twisting around all in one motion. “Fishin’. That’s what we’re adoin’,” he said, just as lucid as though he’d been awake the whole time.
“Oh? Fishin’, huh? An’ what’s that floatin’ there in my crick?”
Brad looked around and saw the picnic hamper floating away. “Well,” he said with a much more subdued tone, “that was our lunch. But this ain’t your crick.”
“Well, if’n it is or if’n it ain’t, your lunch damn sure don’t belong in it. Now git it out of there, little mister sassy.”
By now the hamper was half-sunk and snagged along the bank. While Brad retrieved it I fessed up. “Sorry, Mr. Hermit, I must’a kicked the hamper in the crick when your dog scared me.” The little hound was still dancing around me, bowing and barking, apparently annoyed that I hadn’t started playing with him yet.
“So you ketch any fish, boys?” The hermit almost smiled when he said this.
“Naw,” said Brad, with disgust as he looked into the hamper. “We just got started.” Then he turned to me. “Guess, we’re gonna miss out on lunch as well as breakfast, Charlie.” He held up two soggy ham biscuit.
“Sorry,” I whimpered.
“You sure made a proper job of those, boy,” the hermit said with a laugh.
“Your big hound there nosed us out, didn’t he?” Brad said.
“He sure did. Roscoe here’s the best hound we ever had,” the hermit replied, reaching down to pat the big hound’s head. In response the hound looked up at its master and squirmed at bit. “He kin always find a coon—or a pair o’ poachin’ boys. That’n over by you, little mister.” The hermit pointed in my direction. “He’s just a’learnin’ what this’n’s ateachin’ ‘im.” The little hound gave up on me and trotted back to the hermit and nuzzled the big hound.
“Weren’t sure what I was gonta find over here when I follered Roscoe over the bridge, so I brought muh twelve gauge.” The hermit patted his shotgun with genuine affection. The big hound looked up at the hermit again after hearing its name.
“Say, damn if you boys don’t look like Kellerman kin. Am I right?”
“Yep, we’re Kellermans. What about it?” Brad set the hamper down in the grass like an act of defiance. “That okay with you?”
“Wouldn’t do me much good if it weren’t, now would it?” The hermit’s grainy face puckered up in another laugh. “Your Grandma Kellerman—her name Lucy, Lucy Johnson ‘fore she married?”
“Yeah, I think Johnson’s right. Why?”
“I believe it’s so, cause you’re just as damn sassy as she was. I went to school with her. Courted her some, too. How she be these days?”
“’Bout as contrary as an old woman can be, I guess.”
“And her husband, how’s he?”
“You mean our Grandpa Kellerman? Why, he died ‘bout two years ago. Cancer.”
“Sorry to hear that, son. Really am. Then Lucy—your grandma, I mean—she’s livin’ all alone now?”
“Yep, but lives right close to us, so we’re back and forth a lot.”
The hermit paused and seemed to sink into deep thought, until Brad gave the picnic hamper a swift kick. That brought the hermit back from wherever his thoughts had taken him.
“Tell you what. If you boys’ll follow me an’ the hounds cross the footbridge yonder, I’ll see ‘bout gittin’ yuns some breakfast. My brother Will makes a mighty fine one. How’d that be?”
Brad looked at me and then at the hamper before replying, “Reckon that’d be fine, if it’s not too much trouble. We didn’t eat ‘fore we set out this mornin’ and we damn sure can’t eat this.”

After we got home Dad wore us out with reprimands about where we had been, why the chores hadn’t been done, and why leaving a note is not the same as asking permission. Plus, now it was twice as hot as it would have been if we had done the chores on time. But by late that afternoon we’d gotten everything pretty much caught up and so went in the house to wash up for supper.
At the supper table Dad continued to scold us some and Mom joined him. Brad wore a contrite face, the same one he always did with Father Richter, and responded with subdued “yes, sirs” and “no, mams.” So I did the same. Pretty soon the steam went out of the discipline, blown out the window by the pedestal fan we used to cool the kitchen.
Just about the time we were finishing supper, the telephone rang and Mom, being the closest, went to answer it. We could hear her in the hallway: “What did you say, Lucy? Well, I’ll be! You want to talk to Bradford? He’s right here. You sure? Right now? Okay, I’ll tell him.”
She returned to the kitchen with a perplexed look on her face.
“What was that all about?” Dad asked her.
“That was your mom, Hon. She wants you to come over right away.”
“Why? Something wrong? Plumbing problem again, I’ll bet—that kitchen faucet.”
“Well no, not that.” Mom smiled. “Lucy was both laughing and crying so hard it was difficult for me to understand her. But I think she said two gentlemen just rode up to her house on horses. And one of them has something he wants to ask you. Now does that make any sense?”
As Dad got up to go, Brad nudged me with his elbow and winked. Mom and Dad didn’t notice, Susan didn’t care, but Razzle looked at us and asked, “What?”

I never got to be the big brother in the family, except some to Razzle, but I learned that hot summer in Locust Hill just how wonderful they can be.