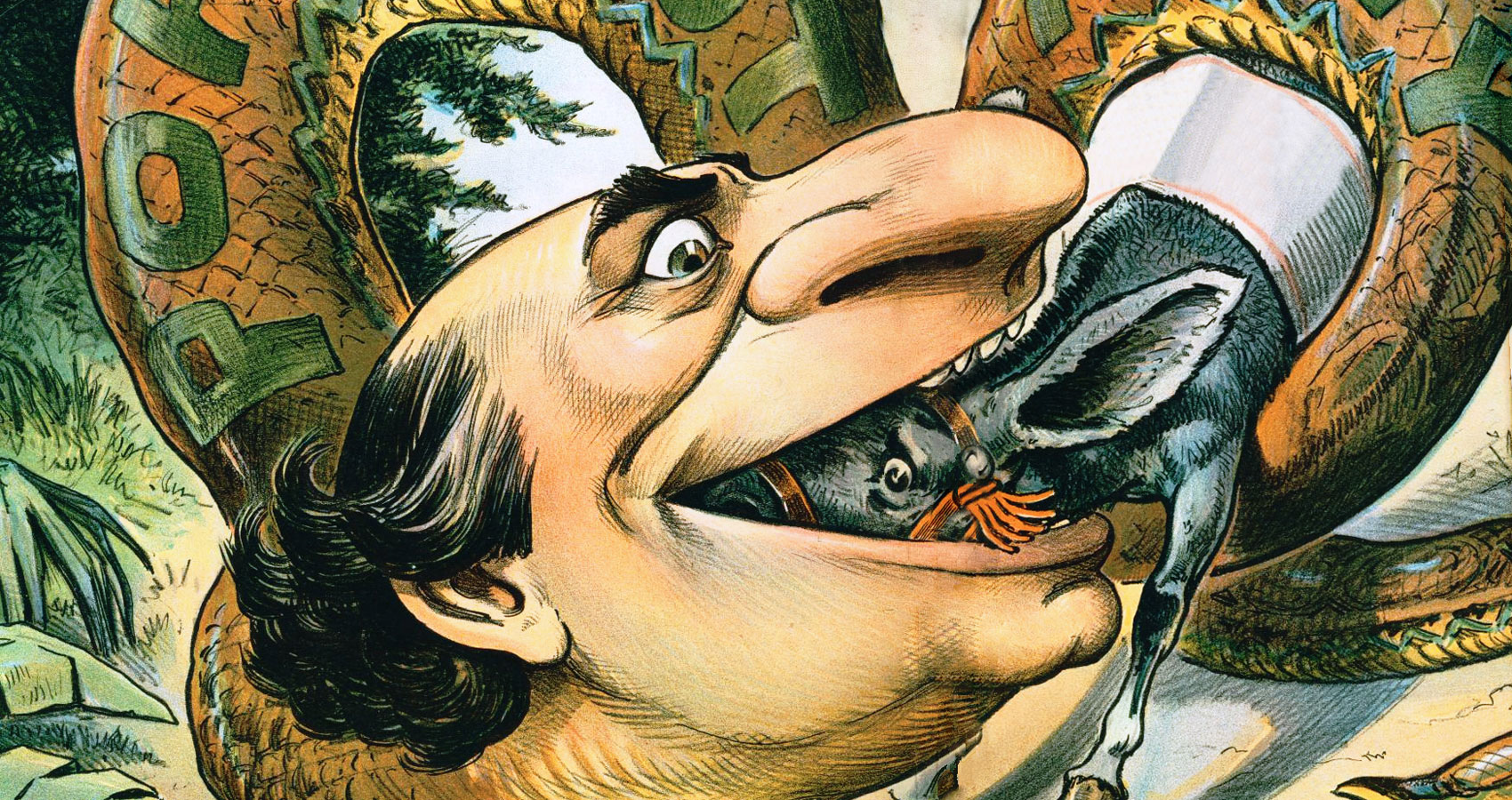 1.
The Prime Minister was an extraordinary man Martie, his secretary, decided as she slipped out of his bedroom. Beneath his habitually grey suit, he concealed a beautifully toned body seemingly honed by years of hard work in gyms. He made love with unusual energy, consideration and finesse. Naked, she disappeared into her own room.
Five minutes after she had gone Godfrey woke up. He switched on the bedside lamp as he loathed the dark. He sat up and took off his head. Underneath, much smaller and to human eyes far less handsome, was a triangular serpents head complete with long sharp poison injecting fangs. He lit a cigarette and wrapped his tongue around it.
His wife hated him smoking. Although she was human, he was genuinely fond of her. He knew that sadly he would eat her one day. He would not be able to stop himself. In his culture it was accepted that after ten years of co-habitation the female was utilised for food. Annoyingly, he would have to do this ordinary act in secrecy, hiding it from all eyes. On his planet, it would be a public event.

It was a hundred years ago since he had come to Earth with a tiny number of his colleagues. At first they lived in city sewers, of which there were only a few, establishing small vibrant communities. They bred rats, which they ate with gusto, fried, boiled or eaten raw with discarded flushed vegetables. Although it kept them alive, and they enjoyed the taste, it left them susceptible to stray viruses. The first human eaten, a tramp who strayed into their community changed forever their lifestyles and culinary habits. Humans they found delicious, especially accompanied by sodden decaying sprouts.
As few humans strayed into the sewers, they emerged into the city in search of food. To their delight they found human herds strolling through their huge concrete nests directly above the sewers. The Synopes ate freely.
After a decade they began to prefer the surface world, hating the sewer with its long pleasantly rank tunnels, spending longer and longer in the sunlight. Their artists fashioned human heads to fit over their own. They acquired work and then, the brighter amongst them, careers.
Once they became part of the human community, trapping, killing and eating humans became more difficult instead of easier. Relatives noticed when their loved ones vanished. Newspapers told of suspected murders. They learnt to be discreet. Some acquired a taste for pork, a reasonable but still inadequate substitute that at times had a disabilitating effect on their constitutions.
That was years ago. Now, Synopes were in positions of power in every developed country. They had grown fond of humans, and like Godfrey/Ecreeps, sometimes married them. Of course, they never had children with the humans, as they were separate species. Sex was difficult too, but their scientists overcame the otherwise insuperable problem of two penises in opposite parts of the body.

That night after reading through a number of official papers once more, Ecreeps lolled back in bed, closing his lozenge-shaped eyes, his tongue continuously shooting out as he moved it over the side of the bed where Martie had slept. Although Martie was new, Ecreeps already desired her. He could almost taste the limp, pudgy flesh of her arms and upper-torso. He was finding it increasingly difficult to control his natural inclinations where she was concerned.

2.
A week later, Arthur, the long suffering Deputy-Prime Minister, was on his way to speak with the PM after ten hours dealing with the recent benefits crises. It was a balancing act, meeting the demands of the moral majority, who rightly hated freeloaders, and fiddling the figures.
Arriving back at number ten, he noticed that lights were still on in the upper floors. Saving energy was one of his obsessions, so he went up there first. He walked in huffing and puffing with moral indignation, to find the PM feeding on Martie, his beautiful secretary. Her intestines were disappearing into the PM’s remarkably wide and deep maw. His tongue, suddenly of an unnatural length, flopped over his chin.
Arthur watched stupefied. Then he bolted. In his panic he ran around and around the lower floors gibbering.
Annoyed at having to stop eating, the PM left his office to see what all the noise was about. He arrived in time to find Arthur being held by two security officers, one of whom was calling a doctor on his mobile. When Arthur saw him, he pointed a finger gurgling:
“He’s a monster. He’s eating his secretary. I saw him. Guzzling her down, bit by bit. He isn’t human. Don’t let him near me-he isn’t human. He’s a monster.” He then gurgled incoherently. The officers gripped him tighter. “Don’t let him near me.” Arthur screamed.
He was still gurgling and screaming when a doctor arrived. Administered a powerful sedative, Arthur slipped quickly into unconsciousness.
As expected, no one initially believed Arthur’s story. Ecreep licked up all his secretary’s remains, including bone and gristle, so there was nothing to see. No evidence remained of Arthur’s curious claims. And, after all, the PM was clearly a handsome ordinary male human and not a lizard-like monster. The only evidence to support Arthur was the sudden absence of his secretary. Her husband had not heard from her. Neither had her parents. She had apparently disappeared off the face of the Earth.
In general, those the PM worked with thought very well of him. Cabinet secretaries, office workers, lowly MPs and cleaners voiced their appreciation of Ecreep. The consensus was, that he was by far the greatest PM they had worked with, intelligent, charming, cultured. The country was once again prosperous. Luxuries were again commonplace. The opposition leaders were lightweight in comparison. No one then active in British politics was his equal.
Nevertheless, rumours spread, and soon the PM, against the more intelligent cabinet minister’s better judgement, was being watched. Geoffrey Harding, the often rebellious and superior Home Secretary, had arranged for a small detail of plain-clothed policemen and eminent MPs to follow Ecreep around and report on his activities

3.
Arthur returned to his position a shadow of the man he had been. Restored to normality by psychotropic drugs, he assumed his place back in the cabinet. Nevertheless, he refused to be alone with the PM and found it hard to look him in the eye.
The PM, in order to deflect suspicion, took to a diet of pork and vegetables. By then it was too little, too late as incriminating evidence had already been obtained showing him dispatching and gorging on delivery boys and minor dignitaries.
As time went on, Ecreep came increasingly ill. Pork, as noted, did not provide the same degree of nutrition for his species like human meat. He became pale and listless. At times he simply took to his bed. The cabinet, led by Arthur, increasingly ran the country. They ran it badly. Industrial output fell dramatically, while the service industries declined with equal speed. The PM’s cool astute hand was missing. The country sank down the world league table.
Ecreep knew he was dying. His grey green skin had grown dry and flaky. He needed proper nourishment. He began eyeing his wife with the desires not of a husband but a lunch guest. As often with his kind, sexual desire and hunger were entwined.
Like a good if old fashioned wife, Joyce assiduously tended to him. As he grew weaker she was at his side day and night. He was the only man she had ever loved, and was anxious about losing him. She would have done anything to keep him alive. One Sunday, in the afternoon, Joyce vanished and a noticeably rejuvenated PM emerged from his death bed, licking his lips.
Assuming power again, within weeks the country was prosperous again, the City throbbed with inhuman energy, the train services ran with the pulsating efficiency of old, newspaper editors cheered up and cacophonies of bellicose protesters no longer gathered in every London square screaming slogans at the rest of the sanguine city inhabitants.
The only negative was the accumulation of evidence against the PM, who after all appeared to be a very strange choice for leader indeed.