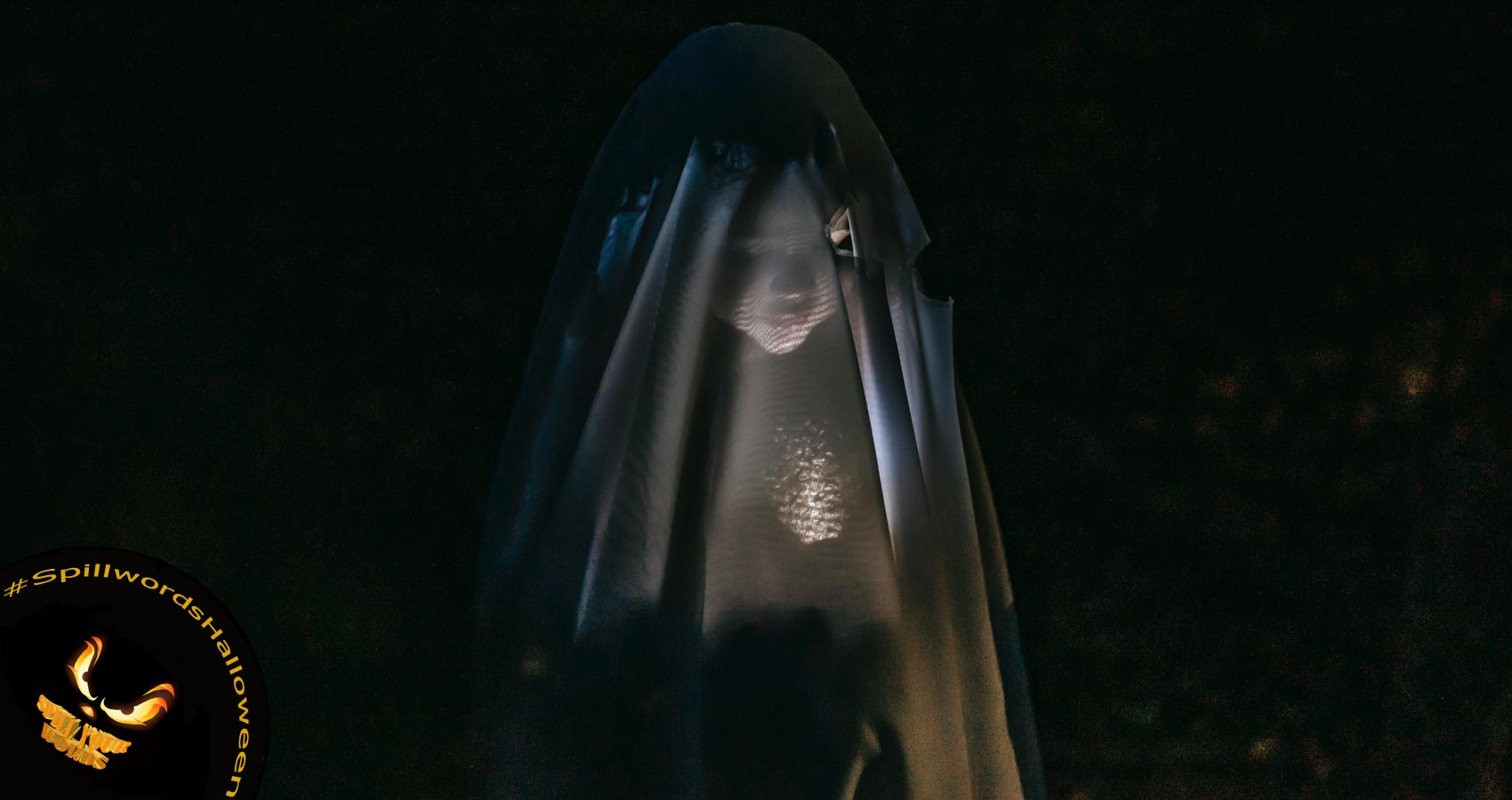 Old Miss Mary-Lou remembered the first time she saw the little girl. Her chestnut hair shone as it peaked out, half hidden under a bleach blonde wig. Old Mary-Lou chuckled as she saw the girl all hunched over with a big hump on her back. That Halloween she’d dressed up as Quasimodo. She’d stood on Miss Mary-Lou’s porch and politely knocked. The old lady thought that little girl could not have been any more than five or six. In Mary-Lou’s opinion that was way too young to be out alone.
“Come in,” she had said and encouraged the girl to enter her home.

It had not been until after, when Miss Mary-Lou had thought to call and speak with her son about the strange visitor that Old Mary-Lou had realized what she had instinctively done could have been considered wrong.
“Mum!” her son Geoffrey had exclaimed from the other side of the phone.
“What? What did I do?”
“Mum, that girl could have been dangerous?”
“Now Geoffrey you are being ridiculous to suspect that she was naught but a lost and lonely child,” Mary-Lou replied.
“Mum! You need to be more careful!”

Old Mary-Lou thought it strange that the child that night had shuffled in. Silently that little girl sat, eating the cookies that Mary-Lou had offered to her. No one came to collect the child; no one seemed to miss such a dear little thing. At the stroke of midnight as the great grandfather clock in Mary-Lou’s hall tolled the hour the girl had gotten up and whispered her thanks. Without another word she then went straight out the door, leaving behind one wrapped candy from her pumpkin shaped bucket. It was a caramel éclair, Mary-Lou’s favorite.

The second year was even stranger. Again the child appeared alone. Tap, tap, tap went a little fist on Mary-Lou’s front door. This time the little girl was dressed as a dragon or some other such scaly beast. Again there was a great bump around the young child’s shoulders and back. Again the child was happy enough to just quietly sit and eat. That time it had been Miss Mary-Lou’s famous banana bread, fresh out of the oven. Mary-Lou had offered to call for someone to come and collect the little girl but she shook her head. She then gave the old woman a soft smile. All of Miss Mary-Lou’s worries had vanished away then.

Again the clock struck twelve in the booming way it announced each hour. Again it was during that time of tolling that the little girl rose from where she was sitting and made her way back out into the dark night. Once more Miss Mary-Lou’s favorite sweet sat waiting for her upon the seat where the dragon had been. It was the only evidence she had kept company with a visitor. That and of course the plate with cake crumbs upon it.

The third year Miss Mary-Lou discovered the girl dressed up as a robot. The costume was made from old cardboard boxes and spray painted a plain grey. Although the boxes over the arms and legs and feet had been small and thin the box that made up the body was quite large and seemed to extend unusually on the child’s back. Mary-Lou initially thought it possible that the child wore something far too heavy across those slender shoulders but then she dismissed such a thought as hostess instincts kicked in. That year had been a sweet pumpkin pie. Orange had splattered the young girl’s costume right down the front as her stiff arms had made eating difficult. It seemed to Miss Mary-Lou that the girl was perhaps a touch clumsy also causing her to spill.
“Allow me,” the old woman had offered and happily the girl opened wide her mouth to receive spoonful after spoonful of the orange goodness.
Just as happily Mary-Lou had spooned that pie right on in.
They had been half way through a second helping when midnight ticked around.
The booming of the old grandfather clock had surprised Miss Mary-Lou and as the little girl rushed away the old lady had dropped the plate of pumpkin pie.

As she sucked and chewed on that éclair Mary-Lou remembered scrubbing the carpet, trying to lift the orange stains before they had any chance to set in. Sadly she had been no longer as young as she once was and the effort was too much. The stains remained, a reminder of a Halloween past.

In the ten years of Halloweens since the first time that the girl had appeared Miss Mary-Lou could only recall one such time her little visitor never showed. That year she had been saddened, missing her strange, often silent visitor. She had also missed that little sweet treat the little girl always left behind. That year when the grandfather clock had boomed the toll of twelve Mary-Lou had surprised herself by shedding a single, solitary tear.
Happily Mary-Lou had heard the year that followed after that quiet little tap, tap, tap that announced the arrival of her tiny friend.

This year, the eleventh Miss Mary-Lou had been unsure. Would the little girl arrive? If so what would she be wearing? Miss Mary-Lou had stopped telling her son about the visitor after that third year. Geoffrey had made Mary-Lou wonder where it was that the little girl had come from and to whence she went after that midnight hour. As Mary-Lou busied herself in the kitchen she considered calling her son and again bringing up the topic of the little girl. When Miss Mary-Lou lifted the phone to her ear though she heard the tap, tap, tap upon her door and the call to Geoffrey was forgotten.
“You’re here!” the old woman announced with glee.
This year the little girl had dressed all in white. Her chestnut mop had been dusted to almost look grey and her skin was pale, unnaturally white.
“What a beautiful little ghost you make!” Mary-Lou chortled.
She made a mental note she’d need to mention such to Geoffrey when she rang the next day.
As the little girl sat in her usual spot Miss Mary-Lou considered what she had left going in the kitchen. It would be over done by now, ruined by distraction.
“I’ll fetch us some cookies,” the elder suggested.
To this the young girl shook her head.
“No need,” she whispered as she struggled with her costume.
Miss Mary-Lou’s eyes grew big as the little girl revealed the nature of her lump.
From what seemed like a disfigurement came two great wings with feathers golden, the pair unfurling in Mary-Lou’s sitting room.
“You have been kind to me, a true friend,” announced the girl.
“Oh my,” breathed Miss Mary-Lou.
“I have come to take you from this world!” the girl continued.
“To heaven?” stated the old lady in disbelief.
The little girl nodded.
“Indeed… I’m to escort you to the land of éclairs…”