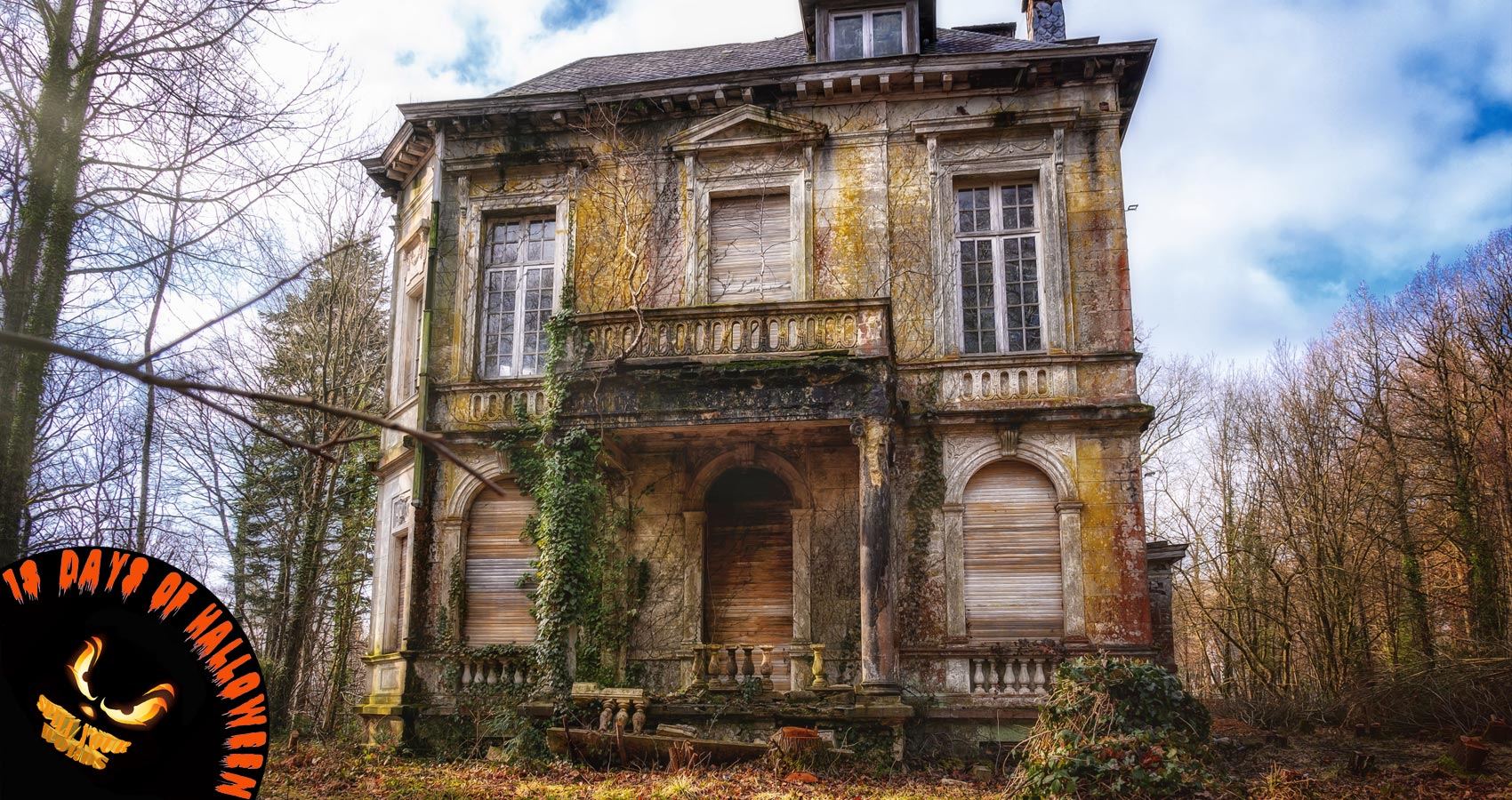 I grew up on a dead-end street. Well, it didn’t really end, it just sort of faded away. All my best friends lived there, too. All of our humble houses were built at the same time, look-a-likes, different colored boxes. Halfway down the street they stopped, and it opened up to fields, unkempt, once farmland. In the middle was a big faded green tumble-down Victorian house. The crumbling, old house sat, tilted as if it was the tombstone for this grave of an abandoned farm. It was a place of children’s nightmares. The haunting grounds of ‘Rattling Bones’. The place where phantoms roamed.

At Halloween, we would dare each other to trick or treat at the door of the Ghost House. Every year one of us got braver and closer to the door, a little farther up the sidewalk, but no one had actually gotten to the door, or for that matter, the porch. Until that one year: that’s when afoot, one foot, hit the rotting boards, it echoed and our hearts stopped. From the distant street came whispered cheering and sticky candy fists pounding into the hobgoblin air!!

It was me!!! The bravest of all!! I felt a mumble tumble out of my throat “trick or treat! Money or eats. We’re the beggars on this street!!” Ahhhh!! Through a window, a gleaming yellow eye appeared – just one! A groan and hiss and a stumble as my arms started spinning in retreat, helicopter fashion. In a great fumble, half falling, skipping, running, choking. My feet sliding through the gravel of this lost road. My sneakers spitting, spewing stones! I halted! My friends: ghost, witch, monster, alien and Dumble stared at me with eyes about to pop out. We burst into a screaming run up the street kicking up tumbling fall leaves. Far enough away, out of breath, clinging to our brown bags filled with Halloween candy, we stood in a jumble. Suddenly, I was blasted with questions: What did you see? Did you hear anything? How did it feel? What What What was it like? What happened?!! All I could say was “The eye, there was a big yellow eyeeeeee!!!!” They grumbled. They wanted more. “What do you mean?” Ghost said. Monster chimed in, “eyes can float on their own – I’ve seen it!!” The witch shouted out “It’s a demon, that’s what! I know it!” Alien, as usual, just pouted. On this most special of all nights we rumbled.

Then a voice, small and humble, whispered “let’s go back” It was little Dumble??
So, for no particular reason, on this night of goblins roaming, we stumbled back to the tumbling, crumbling, faded House. Hobo, Ghost, Witch, Monster, Alien, and Dumble. Down the gravel road. Shoes with laces dragging. We were in the trance, beckoned back by Rattling Bones.
Slowly we fumbled back to the House. Our hearts pounding – louder, faster. As we came closer and closer – and closer. The trees and brambles seemed to more tightly grip this place of creepy secrets. Their branches looking like the Devil’s fist were clutching this house. We stopped. We peered into the thickness. There was NO mumbling. The porch It sagged, so empty, so sad. We thought we could hear the spirits of children long gone, playing still, laughter ringing, in the dust of Halloween’s past. Candy corn tumbling from their hands. Afraid to walk upon the porch again, we decided to try another way into the house.

On tiptoe, by the light of a slice of the moon, we circled its lifeless walls, trying hard not to stumble, and came upon a Coal chute. One by one, and in unison, we pulled up, yanked left, tugged forward, hard breathing and fumbling. Then a small hand poked through the costumed Jumble of arms and legs and gently, so gently, pulled the rusted metal coal chute open. Hobo, Ghost, Witch, Monster, Alien – and Dumble tumbled down into the airless tomb sliding through ancient dust into a forgotten place. A creak. A slam! The coal chute door had shut behind us! We stood up in the murky darkness covered with black soot. Ohhhh, we had bumbled!!!
The smell of rot was choking us. Suddenly, like magic, a lantern, a small jack-o-lantern, Lit up!!! Again it was Dumble who came to save the day. Always so humble.

We stumbled behind the jeering, beckoning, pumpkin face which floated through the dark. Lifting, rising up, ascending the unseen stairs, pushing a door to open. It creaked into a bleak, darkroom. How we wished to be out on the streets — “trick or treat” “smell our feet” was in our hearts, but no one dared to grumble. All was silent. The air was thick like pudding. Only the broken by the shuffling of tiny feet, the rustling of a child’s Halloween costume.

We entered. We Froze. Our hearts stopped. A light crawled up inside the walls….
The most terrifying of visions, — A huge demon’s face glaring down at us ready to swallow this jumble of children. Ahhhhhh! Could only squeak from our throats. Ohhhh!
It was just the light from the jack-o-lantern of Dumble’s! Hobo, Ghost, Witch, Monster, Alien – and Dumble, were shaking, their brains buzzing like bees in a hive. The room was stacked high with old newspapers, tied in bundles. Empty bottles littered the floor causing us to stumble. It looked as if we were inside a box of crackers.

“This place smells, it burns our noses.” We grumbled. “This haunted house is filled with things we have never seen”. We wanted to get out! Run free! Eat our Halloween candy, go home, hug our Moms. Will we ever be kids again? Slowly we moved through this frightful, fearful place. Clinging to each other. The monster cried, “I want my mom!” Witch whined, “let’s find the door and get out!”. Ghost ordered, “Just break a window!” Panic building, we fumbled through the maze of newspapers which tumbled and began to crumble, like crackers as they hit the floor.

The tribe of ghostly, ghastly Halloween hunters pushed through a doorway into what looked like a kitchen. A foul odor stung our noses. Brimstone? We stood in a circle as if summoning spirits. From the other room came a clink, a clank, a spinning. As if bottles were being kicked. Yet we were all accounted for so Who-Was-That? A low rumble. Chains? Tumble, then a shuffle. Maybe a grumble? The sound of bones falling against each other. Were they rattling? Eeeahhy!! The tribe began to scatter and claw at the windows caked over with grime.

That small voice came again: Like a spirit, we had called: “This way’s the door, come on, follow me!” With the jack-o-lantern light bobbing, Hobo, Ghost, Witch, Monster, Alien, and Dumble scrambling to a door. This one is huge and heavy. Once again, in unison, we tugged and pulled every Witch way. Then a small screeching of metal tumbles, locks sliding, knobs turning.
The humble Halloween jack-o-lantern flies through the doorway across the porch leaping into the witch’s black cauldron sky.

A dozen frightened feet scurried across the porch, through ghosts of Halloween’s past. Down the steps to the sidewalk. One pair of feet freezes there. The other ghost hunters still running down the empty street. Yet, I had stopped. As if charmed by a goblins whisper, one foot stuck in mid-air and it pulls me back around. I, Hobo, take a step toward the sad house. Its doors like gaping jaws, moaning. Its shutters, shaking. Windows, crying. Looking as if it will tumble in upon itself. Then, a low growling as the door begins to close. And somehow, I know, that it will be forever. There a crooked shadow can be seen through the dim of the open door. Not so ghoulish, as sad, I thought. A lonely, ageless figure with a gleaming Yellow Eye and candy corn teeth grinning.

As the door groans shut, a burst of stagnant air spits out a shard of ancient newspaper. It escapes, dances and twists across the crumbling porch. Vanishing like autumn and the ashes of my childhood. At that moment, I understood the sadness of the lost and forgotten. Cold tears trickling down my face. I ached inside for them. This was the only night that anyone ever visited ‘Rattling Bones’. Cutting through the chilled night air, a thought – This Hobo turns, face dusted by a beckoning breeze, hearing a slight whisper in the wind teasing through the skeleton branches which tickle the face of the Haunted House. I listen. A voice, a mumble, comes into my head. It is My mother’s voice. It calls me to bed. Obediently, I humbly tread home. To a house which isn’t crumbling. A home of warm lights, sweet smells, gentle laughter rolling through the windows. And on this Hallowed night of nights, my mother holds me tight. And as I begin to drift and dream, I wonder — Who, was Dumble?

Susan DiPronio, published writer of poetry, plays, non-fiction; award winning analog photographer. She is a recipient of both ‘The Art for Change Grant’ and ‘The Transformation Award’ from The Leeway Foundation. They conduct memoir writing workshops with women, the houseless & cancer warriors, founded “Pink Hanger Presents” and co-founded “Wicked Gay Ways”. Her plays, films and photography have appeared in the Philadelphia Fringe Festival, in New York City, in Boston and Toronto, in India and Chile.