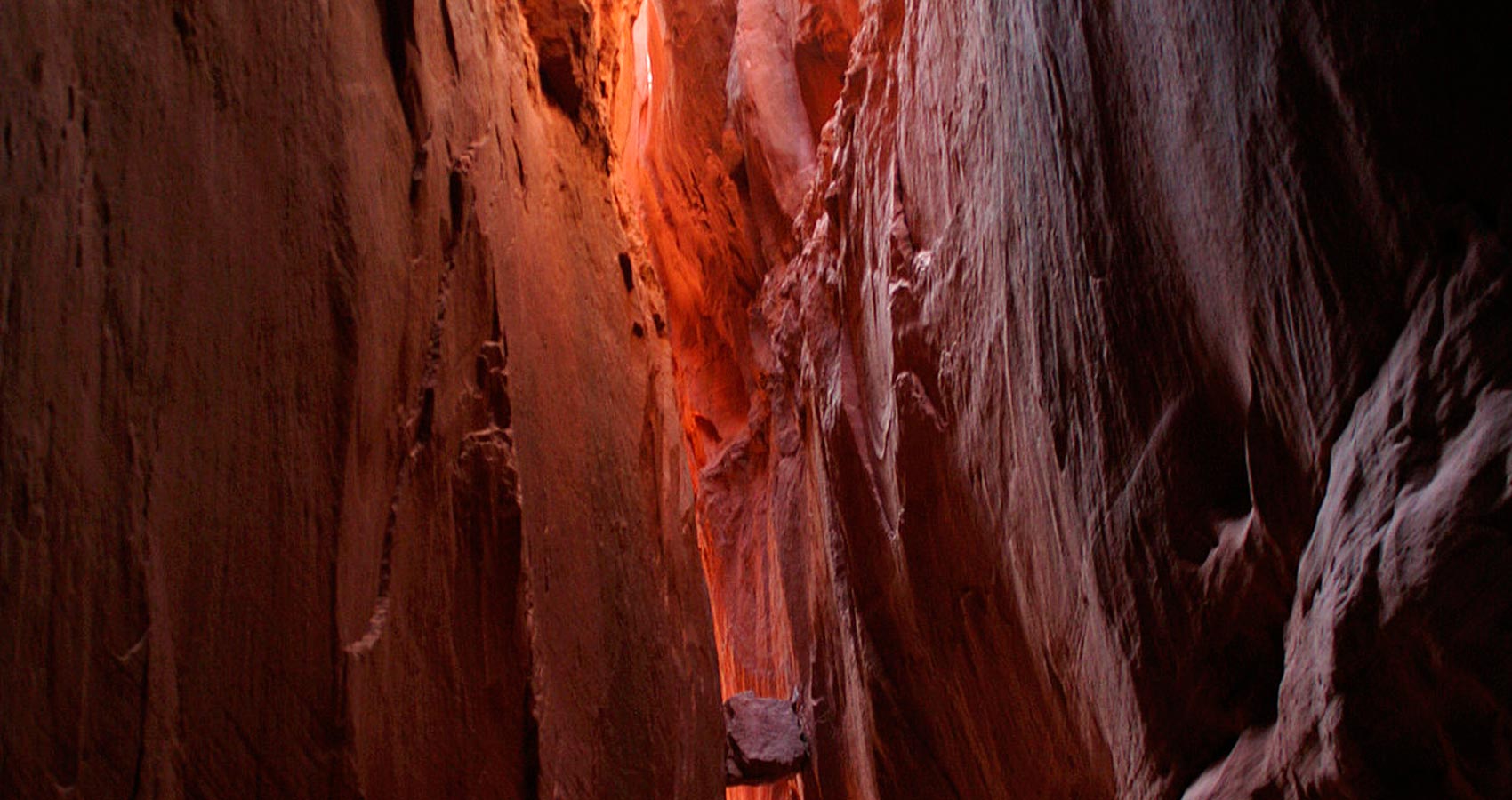 2:45 p.m. Saturday, April 26, 2003 – Blue John Canyon, Utah: Aron Ralston had hiked seven miles into Blue John Canyon and was climbing over an eight-foot boulder when the 1,000-pound rock suddenly shifted, pinning his right wrist between the rock and the canyon wall. He struggled for several minutes to yank his arm free, but he was trapped.

The 27-year-old seasoned mountain climber had planned to be back at his truck, eight miles away, before dark. Aron was wedged between the rocks in such a way that he couldn’t even sit down. Because he had violated a cardinal rule of wilderness travel and told no one of his specific travel plans, no one knew where he was. Aron realized that it was not his hand that he needed to worry about – it was his life.

The boulder had Aron’s wrist pinned so tightly that there was no bleeding. In his backpack, he had two bean burritos and only 22 ounces of water. He knew the average survival time in the desert without water was roughly three days. He figured he could survive until Tuesday or Wednesday. The chances that another hiker might find him in the remote canyon would be like winning the lottery.

Aron thought about amputating his arm at the wrist. In his backpack, he had a utility tool with a dull knife blade. But how would he saw through the bones? Would he bleed to death in the process? Did he have the courage to do it?

After 12 hours of standing, Aron figured out how to use his climbing ropes to fashion a swing seat with his free hand. The swing took a little of the load off his legs. Sleeping was virtually impossible. With temperatures in the low 50’s, Aron shivered through the long first night clad only in shorts and a t-shirt.

The Sunday morning sun brought hope. Maybe, somebody would come along today. But by late Monday afternoon, Aron’s hope was almost gone. Trapped for 52 hours, his water gone, Aron faced a second long night in the canyon.

Aron began to save his urine in the water bottle to have some form of liquid to drink. By Tuesday morning, believing it was his only chance for survival, Aron decided to try to cut his arm off. Using his knife, he began the painful process, but after sawing for a few minutes, he realized he didn’t have the stomach to do it.

By Wednesday morning, any hope of being found alive was gone. After 96 hours of sleep deprivation and exposure, Aron was hallucinating and shivering uncontrollably from cold and fatigue. He carved his epitaph on the rock and hoped to die in the next 24 hours. The weather had gotten colder, and he was confident he wouldn’t last another night.

Thursday morning dawned, not with, “Great, I’m alive,” but, “Oh, I’m still here.” Then Aron noticed insects swarming at his wrist, drawn to the rotting flesh. Suddenly, it occurred to him that if he torqued his arm far enough, he might be able to break the bones. Standing, he applied pressure first to snap the radius and then the ulna bone, which popped like a rifle shot. He used the knife blade to cut through the ligaments and tendons above his right wrist. The gory process took almost two hours.

On Thursday at 11:30 a.m., Aron Ralston was finally free of the rock that had held him prisoner for almost five days. After applying a tourniquet, he started the long walk to his truck. Near his vehicle, he met three hikers who called for help. He was transported to a hospital by a helicopter.

After adjusting to a prosthetic arm, Aron returned to canyoneering and mountain climbing. According to Aron, “The tragedy inspired me to test myself. You’ll never find your limits until you’ve gone too far.” Today he has climbed 47 of the 59 Colorado mountain peaks taller than 14,000 feet.

“There was never a night or problem that could defeat sunrise or hope.” – Bernard Williams

My name is Pete Black and I live in Monroeville, Alabama. I am a University of Alabama Civil Engineer who retired after 40 years in the pulp and paper industry. I write short, inspirational non-fiction micro stories. For the past nine years, I have written an inspirational column in our local weekly paper, the Monroe Journal. My writing is intended to encourage and inspire readers to never give up regardless of the situations and circumstances in their lives.