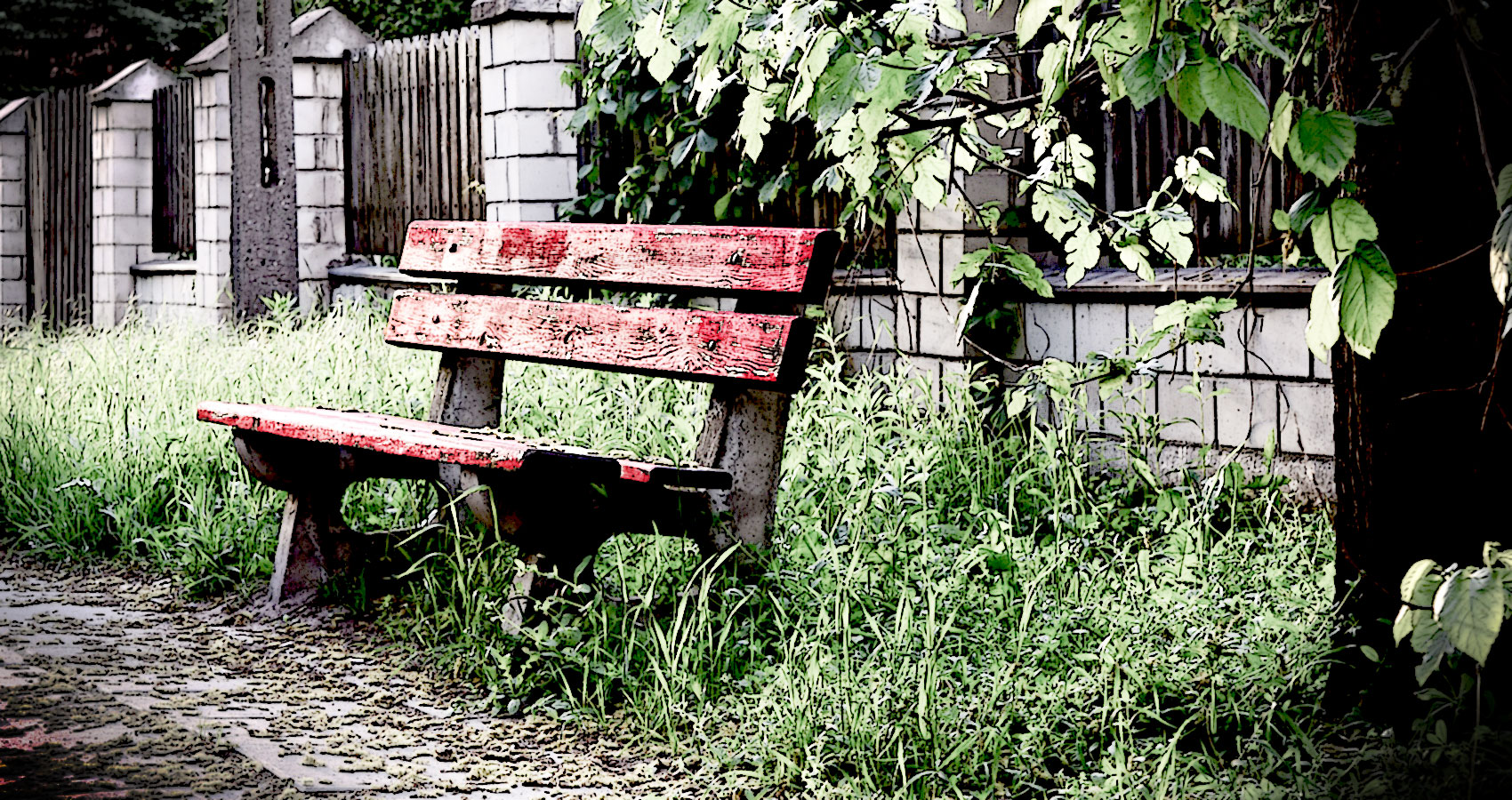 God was shining through the trees. The few lingering grey clouds did little to shade her and she felt the sweat trickle down the back of her neck like a rivulet. She pulled the long, raven-coloured strands into a make-shift bun and piled her mane on top of her head using her own hair to lightly tie it.

The drought was relentless. The pavement was parched. A pudgy kid on a bike stopped in front of her sucking at his blue frozen treat, lapping at it like a dog but it was no use. It drooped and fell from the plastic packaging and on to his pristine, white sneakers. He made a face and rode away searching for that elusive treasure he coveted, a reward for simply being born.

Her spindly legs were stuck to the painted red bench. She pulled at her mini-skirt in an effort to stifle the warmth that invaded her thighs but the material wouldn’t give.

He sat down next to her unassumingly. She stared at his uniform – something from his grandfather’s army chest. He looked poised, composed, and seemed oblivious to the heat, like a mannequin whose hollowness defines it.

“Good day,” he said to her, casting his eyes towards the sign above them.

Route 47 would take them to the opposite end of town towards the soccer stadium and the train station. Her new boyfriend, Jake, was at practice, forcing her to take public transportation if she wanted to see him. She cursed him for it.

“Hi,” she managed to return in greeting, her voice cracking from thirst.

Stephen King’s latest sat upside down on her lap, mimicking a tent. The plot failed to console her. Like the very title of the book, she was in misery. She pushed the button that would silence Glass Tiger on her Walkman and stretched her neck to look past the man who sat with his back as straight as an arrow. Her bus was late.

“It’s usually late,” he said to the air before him, reading her mind.

She sat back against the bench wincing inwardly. She was seconds from giving up on Jake, despite his defined pecs and washboard abs.

She looked at him from the corner of her eye. He had a classic profile with a straight nose and rugged chin. His eyes were grey-green like the sky above their heads that had morphed into something sinister. He was handsome. His hand trembled as it rested on his knee, mimicking his other hand. A shiny gold band void of a single scratch encircled his ring finger.

She pulled the headphones from her ears. “Aren’t you hot?”

He turned to her and smiled crookedly. “You get used to it.”

His stare pierced right through her making her turn away. The residential street was mainly deserted. Some lawns were dotted with bikini-clad sun-seekers who thrived in the heat like the wild roses that grew in their flower beds. Others were at work, daydreaming, or at the beach with their toddlers – boys and girls that would nap their way through swim-time.

She stretched her tanned legs in front of her. She felt his eyes on her gams and she tucked them back underneath her. She picked up the novel, read one line, and snapped it shut. She was going out of her dehydrated mind.

“I don’t know how you can stand it.” There was no breeze in the air. Her breath was the consolation prize.

“Do you live around here?” She scrutinized the various colours adorning his shoulder. The insignia on the faded green jacket were foreign to her, like the Chinese menu in the little place next to Jake’s apartment.

She scrunched her young eyes at him. “I live on Finnigan’s.”

He nodded. “Happy to meet you.”

“Yeah,” she said, holding herself at the waist. “How come I’ve never seen you before?”

“I’m not sure. I suppose it’s for the same reason that we’ve never met at this bus stop before now.” He raised his hand towards his cap. She expected him to remove it and wipe his brow but he only pulled it down further over his eyes.

“What did you mean when you said that I sound like Alice?”

He turned to her slightly animated. “She worries too much. She likes to take care of me. Why, right now she’s at home making her famous meatloaf.”

Her stomach lurched as she thought of Jake. “Have you been married long?”

“That’s sweet.” Her legs bounced up and down. Not an ounce of fat jiggled. She looked down the street at nothing.

“So you always take this route?”

The clouds huddled together above their heads. She prayed for rain. She would perform a dance if she had to.

“I don’t get it,” she told him, sticking a piece of gum in her mouth.

He tempered his disposition. A man never cries in public. “Everyday,” he explained, “I have a decision to make. I can choose to get on that bus and go to war and die, or I can choose to go home to my Alice.”

“Christ, I’m sorry to hear that. Your superiors are okay with you chickening out everyday?”

He laughed softly. He rubbed both hands up and down his thighs polishing the gold around his finger. “How old are you?”

He nodded, “Well, then, I guess you don’t know much about the war.”

She smacked her gum loudly. “Which one are we talkin’ about here?”

He turned his head and held it high. The look in his eyes suggested he was remembering something dear to him. He pulled the band off his finger and held it in his palm feeling the love emanate from it. He placed it back on his finger. The air around them was thick with memories. A bird squawked from a nearby tree. The rain never came.