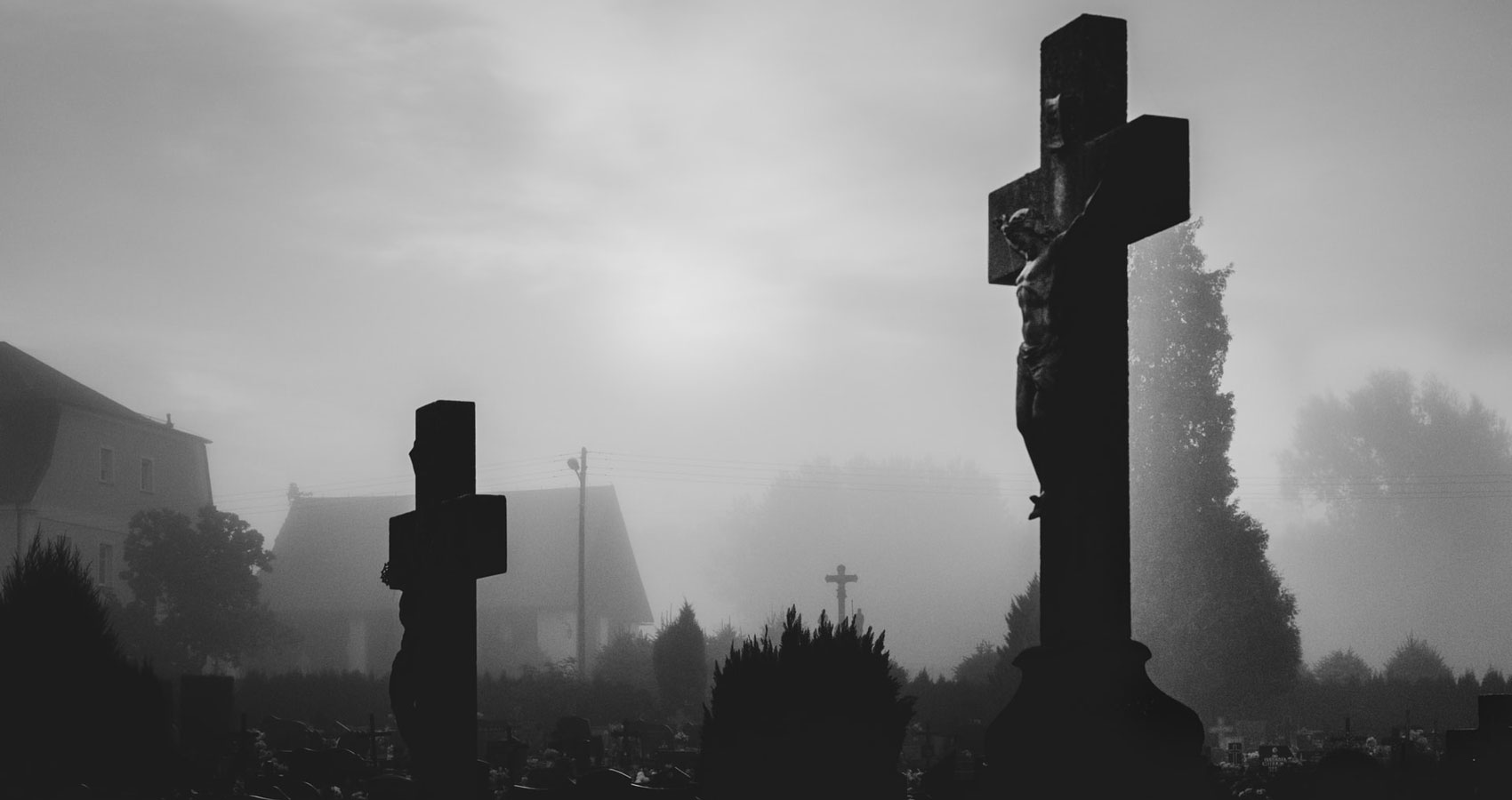 The next day, a quiet morning dawned as the town awoke to a grizzly scene of murder and mutilation across Barrington. In the home of Mayor Caulfield, a house maid discovered George and Cynthia in their bedroom asphyxiated, hanging from the chandelier. Despite every rationalization, no one could determine how they manage to reach the lighting fixture to hang themselves.
Near the center of town, the fetor of decay emanated from Dr. Penn’s medical institute, leading the town to uncover many dark secrets remaining within. The bodies of Dr. Penn’s handlers, Malcolm and Vincent, were found sitting upright in the pews of the auditorium, each missing their eyes, ears and tongue. Inside Dr. Penn’s personal chambers, Dr. Penn’s remains were found among a scene of ritualistic sacrifice. His corpse, drenched in an unknown substance and displaying advanced stages of decayed flesh, lay under the guise of his fallen idol of the demon Wendigo. Infected and highly contagious, Dr. Penn’s remains became the source of a renewed outbreak of cholera throughout the land and had to be burned.
Not far from Dr. Penn’s medical institute, Father Campbell turned up dead inside Lord Haven’s Parish. His body had been impaled onto the altar by a sharpened crucifix. Whoever had committed such a heinous act must have been a person of great strength, for no one could determine how the killer was capable of forcing such a large crucifix into the chest of Father Campbell. It was a horrific sight many found to be unwarranted, until they had discovered the remnants of Father Campbell’s personal effects. In the parishioner’s office, there existed a secret room behind a cabinet. The cabinet had been moved and the door to the secret room left ajar. Inside the room, the townsfolk uncovered a dungeon filled with torture devices and skeletons of dead children chained to the wall. Most of them were still in the process of decomposition. Every one of them, boy and girl, met a painful end at the hands of the priest.
But, what remained a mystery at the time to the townsfolk that day was the whereabouts of Edmund Raye. His absence led many to believe that he was the murderer, but without any evidence, no one could be certain. It wasn’t until a few days later that the townsfolk discovered the tombstone of Annie Mae Caulfield had been torn from the ground. The remaining members of the town dug up the coffin to ensure no one had tampered with Annie Mae’s body. What they found in the coffin left everyone that was present speechless and horrified. Annie Mae was nowhere to be found! Instead, they discovered the body of Edmund Raye, buried alive as it were. On the lid of the coffin was a message that looked to have been carved by Edmund with nothing but his fingernails. The message read, “I shall be vindicated!”
Not long after the discovery of Edmund Raye and the gruesome Barrington murders, the townspeople had finally succumbed to disease, leaving the town dangerously few in number. After the Civil War, the town was completely abandoned. To this day, all that remains of Barrington are the overgrown ruins within the ancient Appalachian forest. Rumors abound that few travelers who have passed close by the lands that were once Barrington can still hear the voices of the damned – chanting, cursing one another in eternal torment – and a woman clad in white seen wandering through the woods. The body of Annie Mae Caulfield was never found.