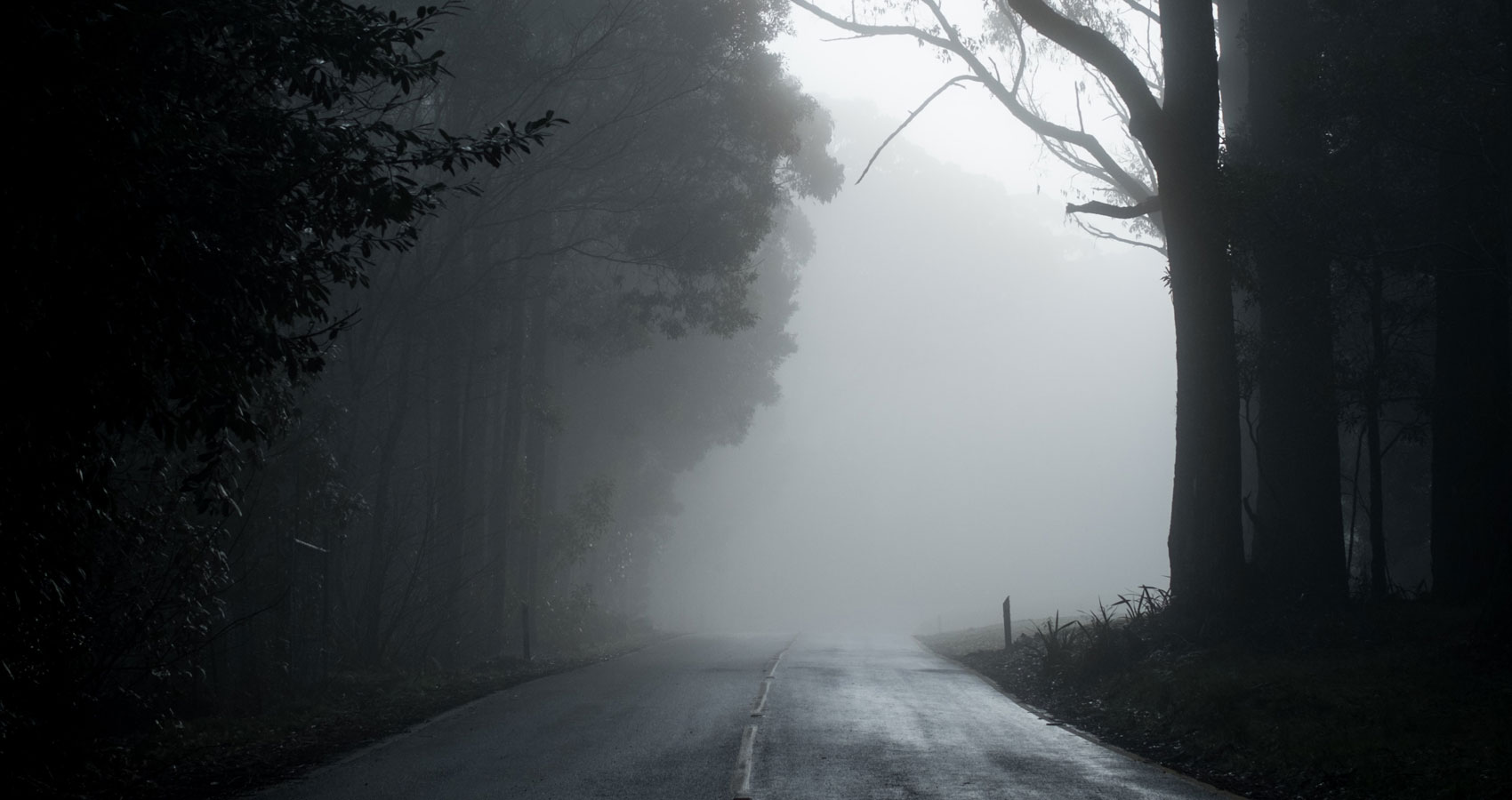 The road looked like spilled ink, black and wet, reflecting a lone streetlight in the far-off distance, its light rippled upon the dampness as if struggling to not be consumed by the blackness. We walked hand-in-hand through the foggy abyss. I felt no coldness, no warmth.

The hand which held mine was of a large man, whose face I could not see. His grasp began to loosen slowly as the streetlight grew more distant with each step until darkness grew, veiling me with blindness—leaving me alone, lost.

An evil force, an energy, a presence, which stirs one’s feelings to panic and run made itself known to me. It was an all-encompassing presence, it was the pitch of blackness incarnate.

Through the darkness, I ran to many life-scenes seeking refuge, but the evil took shape thru an echoing, baritone voice, “From whom do you run?”

I ran to another memory, seeking protection when the evil entity growled again, “From whom do you run?”

Upon the third assault, I was cornered in a memory most loving to me. I stood firm. It was as though fear itself had crystallized, my veins coursed with courage.

I shouted with an innocent child’s cry, “You! You are Evil!” There came laughter, a bellowing bass fiddle sort, which was not really laughter as we know it—for in this whole episode, there were no words, just feelings, a kind of language felt from musical chords which can pace one’s heartbeat, thoughts and intents.

The wicked laughter filled all the space about me, yet, my being, as I felt my soul, was somehow impervious to this attempted grievous osmosis.

I was alone, from my kind; I was as a blue light in the bowels of darkness. Any movement, I felt, would mean a commitment though, so I stood shielded in a space and time which could last forever. For, I was protected; as I stood, from integration. Yet, life such as this should not be contained in such shadows for eternity, surrounded by the gloom that would devour my light with its eternal wounds.

There was not enough of myself to heal the darkness.

There was not enough of myself to make a difference.

Through my insignificance, however, I sought life and I defied the very source of the evil’s baritone conjuring as I plunged forward, toward the essence of the demonic sounds. Faster, faster, screaming, as a child being forced through the birth canal with a furious display of soprano. I grew colder and colder but bound to my direction. The maniacal laughter grew louder, so intense, driving me crazed until I felt myself pass through it. Suddenly, there was nothing.

I ran through EVIL!

Instantly, I found myself within a room—a glass bedroom.

A huge, over-sized, circular bed situated in the center of the room, flowing white curtains of the sheerest quality, hung around it majestically. There was a morning-fog quality about the room, the kind when the sun battles the dewdrops of evening air to reign. The last soldiers of darkness—overcome and put to rest.

Through the layers of curtains, I could see a figure upon the bed and in my state of confusion, I moved to an angle enabling my vision to identify the person. It was a man, garbed in a deep royal blue, velvet garment.

I knew the face in an instant, but the mannerism was quite unfamiliar. He gestured to me when I questioned him as to why he had let go of my hand when we were walking. In his relaxed, semi-reclined position, he lifted his hand as if shooing flies away and declared, “You are not my wife.”

His hand continued motioning and two servants responded, approaching me with a glorious wrap. It was the purest of cream colors, a hooded robe with raglan sleeves, gold silk braided tassels to cross my breasts and encircle my waist; the hem tempted the floor to kiss it.

The servants stood, each holding a shoulder and sleeve, gesturing that I step into it. I walked toward them, slipping the robe over my body and they ushered me to sliding glass doors which appeared to be the only doors in the room.

It was a spacious room, composed entirely of tall, sliding glass windows on three walls. The fourth wall appeared solid, constructed of rich mahogany wood. But, as I turned back to look at the man upon the bed, beyond the veils of drapery, something within the wall began to move. I noticed the inconspicuous outline of a door; a newly materialized brass knob began to lift.

Through this mahogany door, his wife was to enter.

We said nothing. I realized that he was the abyss wherein I was lost. He was my hunter.

I was not his wife. Someone else would be his wife.

The servants gently guided me to the balcony whereupon standing, I viewed a most extraordinary garden, structured, manicured, acres and acres of fragrant paths, full of colorful, flowering plant life.

As I descended the stairs leading into the garden, I noticed maze-like walkways. Yet, I began toward them, unafraid of ever being lost again, enjoying the warmth, the daylight, the redolence.

Feasting my eyes upon the surrounding beauty, I turned back, looking to the distance from where I came. An empty, darkened, dilapidated mansion was all that remained. The solid stone balcony and circular stairway from which only moments ago I descended were crumpled as an ancient Roman ruin. Old, worn, torn, yellowed sheers blew through the glass doors from within, as though a wind suffered throughout the mansion. Yet, there was no weather in the garden below, merely sunshine, peace and flowers – soft, fragrant, living blossoms… enveloped in blue light.

Sue Marie St. Lee is a retired Finance Manager realizing her life-long dream of writing professionally. She has been featured in international horror anthologies, Spillwords Press and the Paper Djinn. In the year of the plague, 2020, she is transitioning from the horror genre to Fantasy, Inspirational fiction, and Faith-based fiction while continuing to work on writing the memoir of her late son.