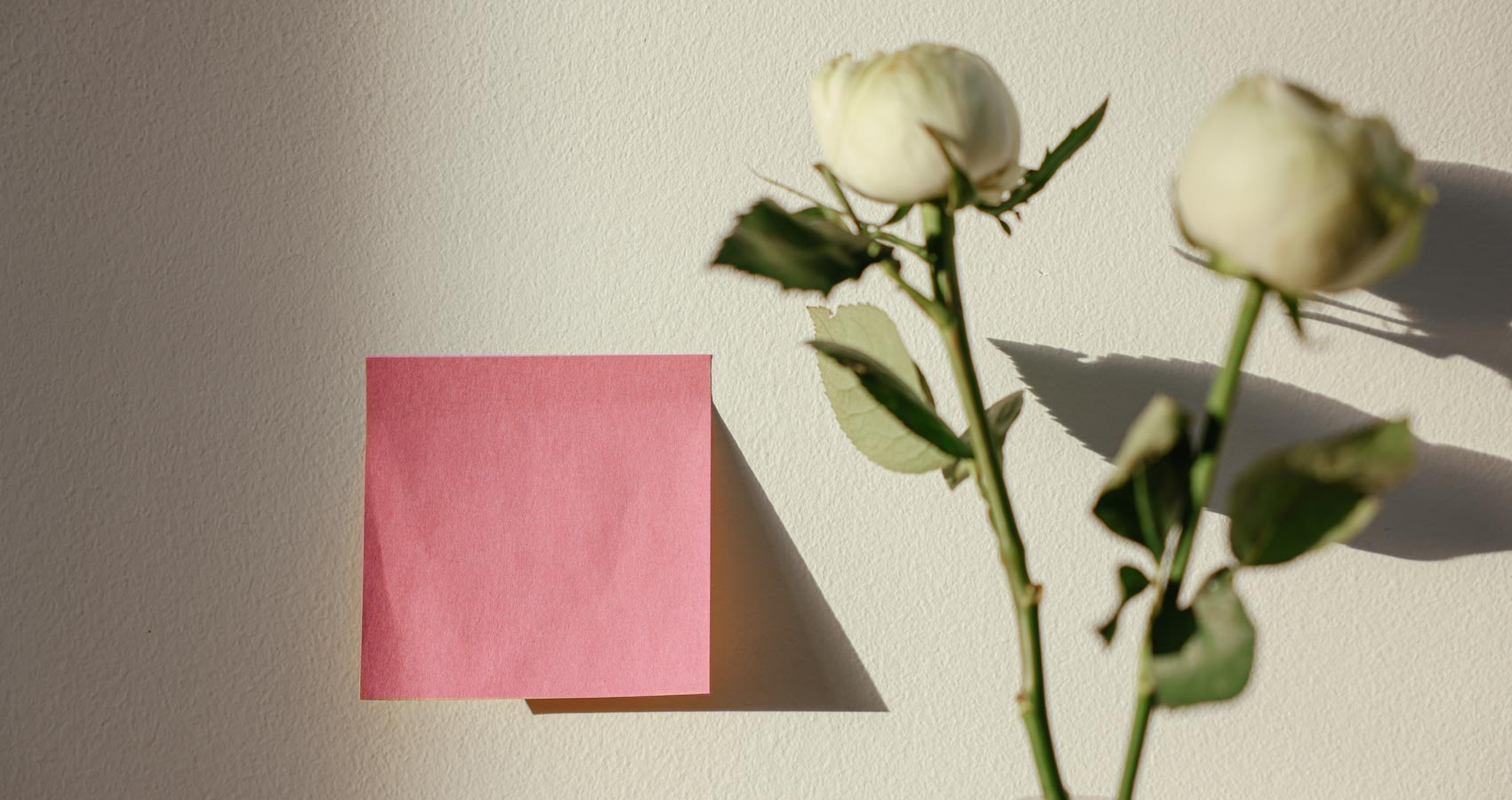 The car in the space next to me has a pink sticky note on its dash.

I see it through the window as I get out of my hatchback. The note is placed squarely in the centre, just over the cd player, I think. I can see the writing; blue pen, cursive, three lines.

It’s a momentary glance, one of those things we just do — we get of our car at the local shopping centre and glance around, just before we shut the door, as though some ancestral knowledge is tapping us on the shoulder. Be careful, it says. Assess. Look.

I don’t know why the sticky note catches my attention. But it lingers in my mind as I walk to the elevators. Was it a note from a partner? The secret language of domestic life? (Get the good bread.) Or something work-related, perhaps. A deadline. They need new printer paper. They work from home.

I’m near the elevator, where the Video Ezy kiosk sits. I know as soon as I reach the top of the elevator, I’ll forget the note. And sure enough, I step on and it starts — the creeping uneasiness that has no basis. I have terrible anxiety in shopping centres. Much of it is caused by the stark white floors and glaring, overhead lights — I feel all that brightness pour into my eyes, forcing my eyelids wider and wider, until I’m left feeling nothing more than some strange, bodiless visual receptor, floating above the floor, while everything around me becomes slightly distorted, in all that light.

But while this in itself can be disorientating, I’ve been here late at night when the shopping centre is almost deserted — because it’s that kind of town — and the anxiety is nowhere as bad. No, it’s the people, of all things, that really make me panic. When did people become so scary? It’s something about their physicality, the shape of them, the smells that drift around them; cigarette smoke and perfume and aftershave and hot chips and warm bread and incense. The way the women in maxi-dresses with spaghetti straps seem to sway across the floor, hips aggressive, cleavage stamped with their children’s names. Or the men in suits who want us to know they’re too good for this place. I didn’t get off the elevator fast enough for one of them once. As I put my foot out to the floor, he tried to overtake me — almost body-slammed me and had to jar to a stop. He decided to blame me, of course — the obstacle he so desperately needed to circumnavigate — sighing so loudly for my benefit it was almost a groan. You know the sound. I wanted to roll my eyes, to shout at him, to … knock him down, onto the white tiling, and perhaps sit on him for a bit. You’re not going anywhere, buddy.

The jungle of people at Wendy’s terrifies me. The tables and seats are in the centre of the floor, and they group there like seagulls. Their combined voices float in a cloud above their heads and it radiates out. It hits me, a wall of pulsing sound. And the utility scammers standing around their folding tables flash those laminated but still-creased cards with the familiar logos at me. What provider are you with, they ask, and I long, I ache, to say something clever. None, I’ll say. I live in a Yurt. But instead, I just smile weakly and say No Thanks. And maybe later, on the way back, I’ll see an older person caught by them, slightly confused and shuffling. We never help them, do we? That’s someone’s grandad, blinking like a koala that’s fallen out of its tree. Why don’t we race over, grasp his elbow and guide him away? It’s a scam, we’ll whisper, and deposit him gently near the optometrist. But we don’t. He’s not our grandad.

By the time I’m in the supermarket I’m over it. I’m tense and over-breathing. I hate everyone. I have this terrible feeling of unbalance. As I walk down the isles it’s like I’ve forgotten how to walk properly, like my feet are a hairbreadth away from sliding right out from under me. I panic, hardcore. I only wanted frozen beans and toilet paper and dog food, Why Is This So Fucking Hard?

It’s not until I’m back in my flat, safe, that I remember the sticky note. The thought of it fled while I was trying not to hyperventilate. I think the car was gone when I reached the carpark again, but I can’t be sure. All I was aware of was slumping behind my steering wheel, slicked with sweat and relieved. Because it was done. I’d survived, once again, another trip to the shopping centre. But now I feel an odd, lingering attachment to the owner of that car, that note. If it was a reminder of some sort, I hope they remembered. I hope some kid isn’t stuck at the footy field, waiting. That the good bread was bought. That the block of printer paper is sitting on the desk. If it was a note from a partner, I hope it was a kind one. Or at least a neutral one, because that’s sometimes the best we can hope for, isn’t it? Neutrality. No threat, no baring of yellow teeth.

The thing is, I have a terrible longing for the note to be some form of loving communication. Maybe that’s why it was pink. Maybe that’s why it was stuck so precisely in the centre. It meant something. It was glanced at fondly. It was more than just some mundanity of life. I don’t know why I need this, how such romanticism even exists in someone like me. It’s the same feeling I get when I walk past someone’s home late in the day and catch glimpses of family life right in the middle of things — a voice shouting at everyone to come to the table, to take the bins out. Someone rushing to the car, keys jangling and calling back over their shoulder. They forgot milk. They’ll be back in a bit. It’s not my life, but its real and tangible, and just like the glare of supermarket lights hit me square between the eyes until I reel, so do these small moments affect me. They pierce my heart and dissolve the bitterness. That’s why I can’t stop thinking about the note. I convince myself it was a love note. Someone is loved. There is still love here. Enough, even, to go around the world, to reach everyone, eventually.

Michelle is a writer and aspiring novelist from South Australia, the owner of an elderly terrier and a very, very bad gardener.