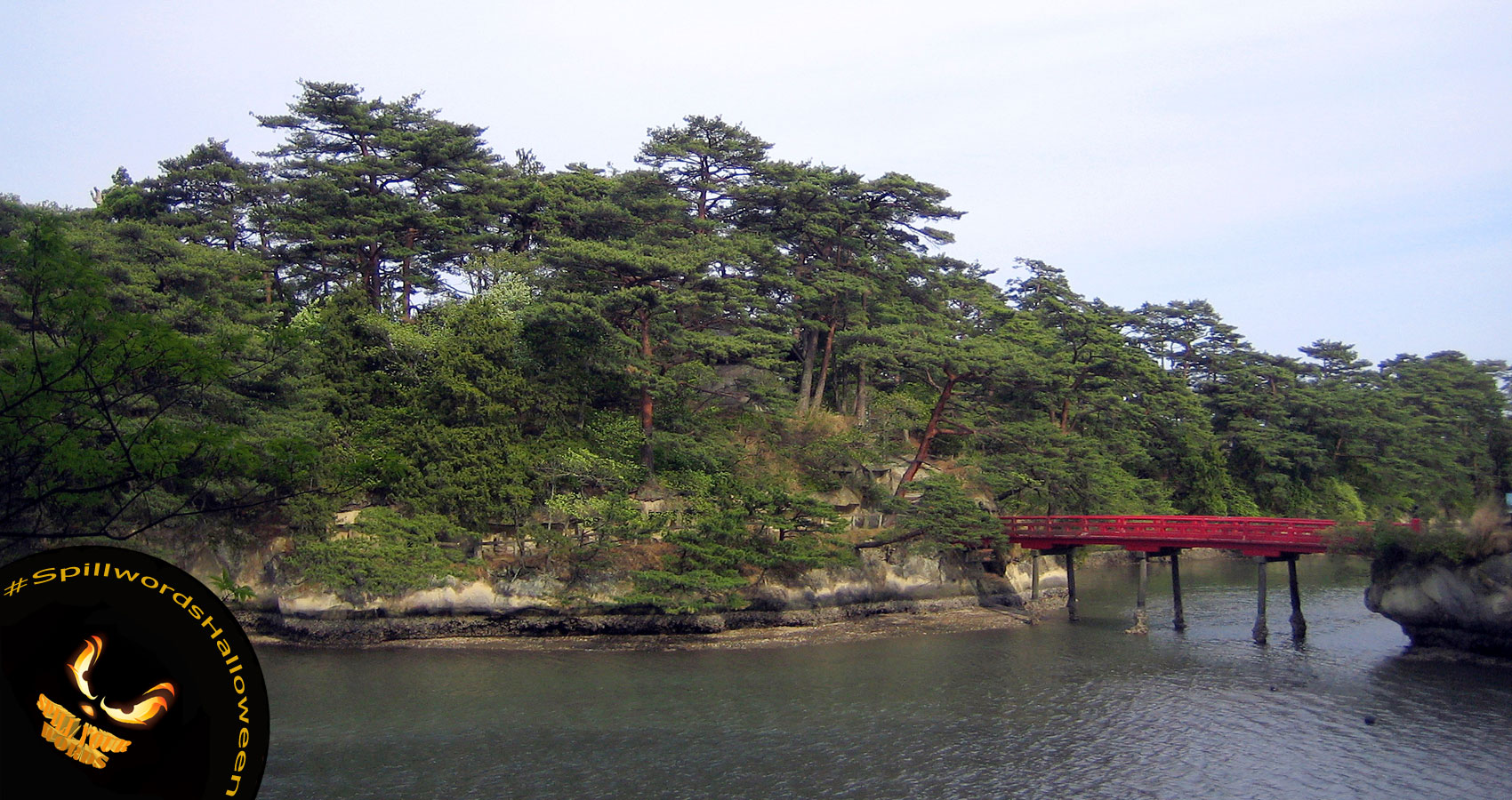 The Bon Festival of the Dead is the perfect night to search for the lost mask of Lord Masamune on Oshima Island, or so the legend suggests. I must move quickly for the sun is already on its downward path over the hills above Matsushima Bay. Crossing the red bridge, I use the rope to climb up the sheer rock face. The path on top of the cliff, leads up to the island’s high point, a tiny wooden temple. Oshima appears deserted this evening, its small size offering few hiding places for the explorer. You will meet me at dawn, by the rope climb.

The shallow caves are full of tombstones and artefacts. But after much fumbling around in the half-light, I have nothing to show. In a shallow cave, the glint of moonlight off something in a recess catches my eye. It’s an ornate mask, of the emptiest black possible. The only colour is the crescent moon on top. This must be Masumune’s mask. That it has not been found before in such an obvious place, makes me a little nervous. I hold it close to my face; surprisingly it’s a perfect fit. A short knife is found beneath, I assume to allow a samurai to regain honour through seppuku.

I pick up the samurai knife. For you are here at sunrise. Soon enough the first stain of red appears over the water of the sacred bay. I polish my blade rigorously, before hiding in the dark of a narrow cave near the precipice. On the coast road, a distant figure appears making slow progress toward Oshima. The man stops and dances every so often.

The flashback strikes me unaware. There you are. Mocking me, beating me, blaming me, RAPING me. My shame is unbearable but no tear escapes from the mask. The death mask is stuck to my face; it cannot be removed. I breathe deeply as you traverse the bridge, climb the rock face, and draw close to the cave.

From the blackness, I slash at your chest, slitting it open with a clean cut. Screaming, you run into the tunnel that leads to the other side of Oshima. Your panic abates until you see me silhouetted by the rising sun at the far end of the tunnel. Walking toward you purposefully, escape is impossible due to your gaping chest laceration. I plunge the knife into your back, ripping it down the spine. Somehow you manage to make it out into the sunlight before collapsing in a pool of blood.

The death mask drops from my face. Drained of emotion, I sit and watch the sun rise over Fukuura Island, drifting into sleep until noon. Waking, I note that your body is missing and jolt upright. There’s not even a patch of dry blood where you fell. Terrified, I search the small island further, but cannot find my husband alive or his cadaver. On the Pacific horizon the sky and sea appear blurred by a dense mist. Squinting in the morning sun, the true horror is revealed. A great wave spans the entire width of the bay, decimating all pine-clad islands in its wake like the ancient sea monster, Charybdis. It will soon be here. I don’t have enough time to find high ground so I shelter in a nearby cave lined with faceless stone statues.

The tsunami consumes Oshima, sweeping through the tunnel, cleansing the meditation caves. I cling to the tallest statue, noticing a woman’s face instead of what was once clean stone. Vivid lights guide me into the largest cave, an ancient tomb full of mummies from centuries past. One still writhes, an uncovered hand stretching through the turbulent water. The cold fingers which wrap themselves around my neck, are yours. I begin to glow bright yellow, attracting the spirits of several sea ghosts. The women drag you screaming from the cave into the whirlpool outside. No-one could withstand that maelstrom. A ghost in a kimono dotted with lotus flowers, remains to guide my soul in the dance of the dead. In time, tsunami water recedes. Oshima is purged of life once more.