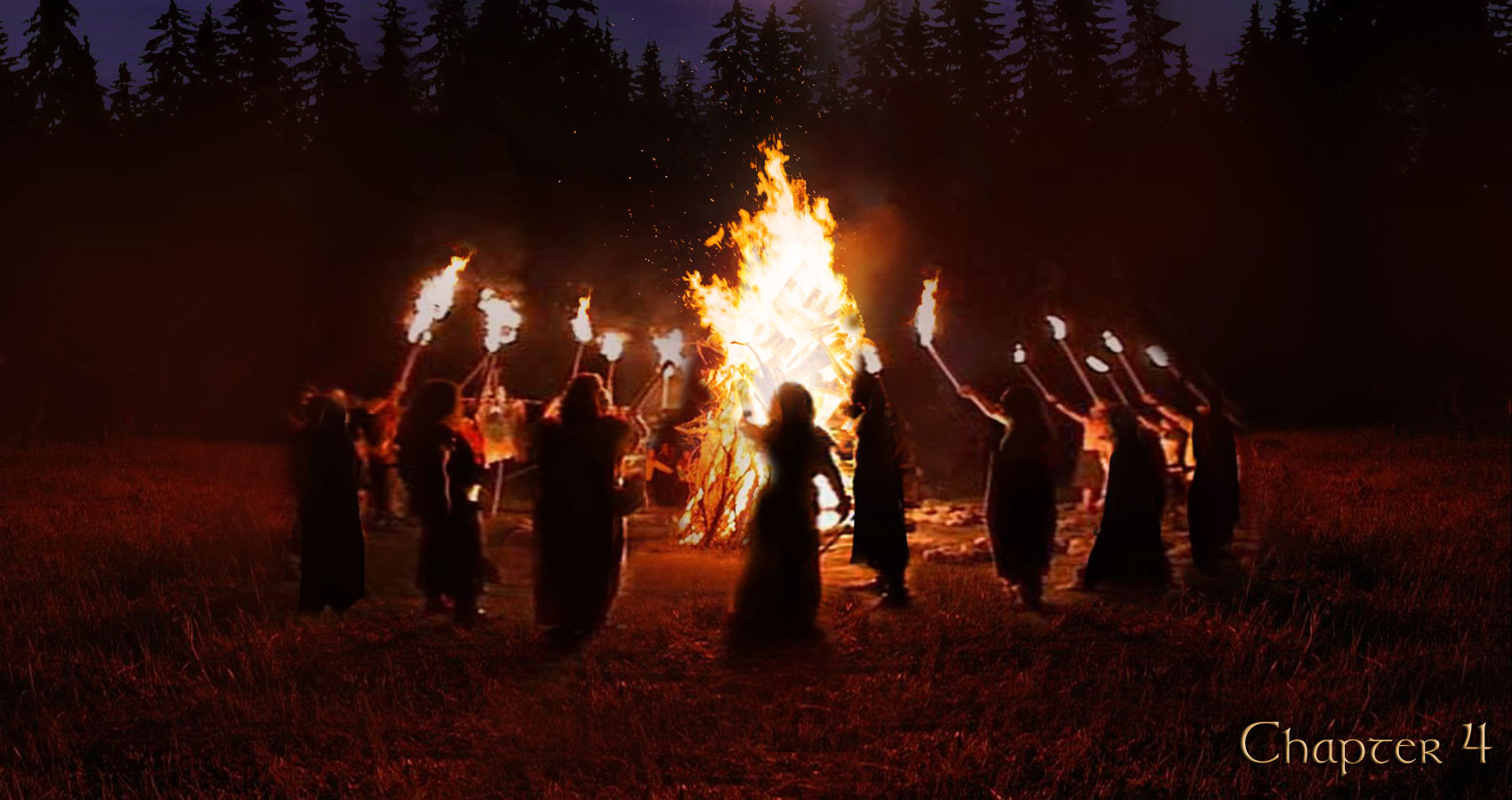 As shadows grew and thickened in the town, Garux, Arvasia, and Seneusia set off to look for Rawena. On their way toward the gate, Garux realized they had never told Seneusia the news. Now it would have to wait until they found his future sister-in-law.
Garux wished he could ask the druidess where to look for Rawena. The druidess lived beyond the pastures, though, and only her acolyte could visit her. In any case, the druidess would have come to tell them if she’d had any more visions of Rawena.
Vitis was already closing the gate for the night. To Garux’s dismay, Chieftain Ateran and his demented bodyguard Uxur stood near.
Ateran was about thirty, and he had become chieftain after his father’s death last year. While Ateran’s father had been fearless yet impartial and good-hearted, Ateran was a cowardly tyrant who punished every small offense by whipping. Uxur was Ateran’s second cousin, a drooling ogre who loved to feel the whip in his hand.
“Vitis, wait!” Garux called as they trotted forward.
“What is it, my friend?” Vitis asked, leaving the gate ajar.
“Close the damned gate!” squealed Ateran, but everyone ignored him.
“You have to let us out, Vitis,” Seneusia said. “My Rawena hasn’t come back, and we must find her.”
Ateran stepped closer to Vitis and yelled, “I said, close the damned gate!”
Just like every nobleman, Ateran sported short, spiky hair, curvilinear tattoos on his face, a drooping mustache, and a thick, golden torc around his neck. Those were supposed to make him look fearsome and dignified. But since he had beady eyes, sagging jowls, and an upturned nose with giant nostrils, he looked like a gilt, mustachioed hog.
“My daughter might be in mortal danger,” Seneusia told him. “The druidess said something bad would happen to her. And we are going to look for her.”
“Oh, you aren’t, bitch!” Ateran spat.
Garux felt like punching him in the face. Instead, he took a deep breath and said, “Be reasonable, chieftain. Let us—”
“Listen to me, you greasy ass!” Ateran squealed. “The hunters have seen hundreds of footprints on the merchant road. I bet it’s the Marcomanni, and you would attract them to the town. Nobody’s leaving tonight.”
“Attract them to the town?” Garux said. “But—if you’re afraid of that, we would have to stay holed up in our homes during the day, too, and not even start fires.”
Ateran opened his mouth to reply when Arvasia put in, “Forcing us to stay here makes no sense. If your father were alive, he would start a search party for my poor sister. And you? You won’t even let us out?”
“My father is not alive, is he?” Ateran snapped. “I am the chieftain now. Chieftain! And yes, I forbid you to leave!”
“That’s too bad because we are leaving anyway, cowardly man,” Seneusia said. “And you better not try to stop us, or I’ll break your porcine snout!” She took a step toward the gate, but Ateran pushed her so forcibly she staggered backward.
“Leave my mother alone, you pig,” Arvasia snapped, lifting her hand as if to hit him.
A shadow of fear passed over Ateran’s eyes. He took a step back and nodded to Uxur. So far, Uxur had only drooled and gawked, but now he balled his hand into a giant fist and stepped forward.
Garux knew the ogre wouldn’t think twice about punching a woman—if he could think at all—so he grabbed a spear that leaned against the wall and slammed Uxur’s wrist with the butt end.
Uxur growled with pain. He turned to attack Garux, but Vitis leveled his spear at the ogre’s belly and shouted, “Don’t even think about it, you dumb beast!”
Uxur froze. His dull eyes flicked between the spear’s point and Ateran.
“Vitis!” Ateran shouted. “Leave my man alone and arrest Garux and his two whores!”
Vitis kept the spear leveled at Uxur.
Ateran’s nostrils expanded as if they wanted to swallow his nose like two black holes. “Vitis, I command you as your chief!”
Vitis spat on the ground, and Garux admired his courage. Vitis could face severe punishment for disobeying Ateran, who was his highest commander.
Garux turned to Ateran. “A man who lays his hands on a woman, and who needs a bodyguard to protect him from a girl, is nobody’s chief.”
The confrontation had drawn a large crowd to the gate. While some tattooed nobles shouted at Garux to shut up, the others only grinned, and all the commoners cheered him. Celts prided themselves on being fearless, and they hated Ateran’s cowardice, which they saw as the worst personality trait.
“Arvasia is right,” Garux continued. “Your father was a great man and leader. But you’re nothing but a chicken-shit tyrant.”
“People! Have you heard this?” Ateran screamed, his eyes gliding over the crowd and alighting on the nobles. “Will you let this scum insult your chieftain?”
Some nobles stepped forward, and the commoners glared at them in silent challenge. Nobody drew their weapons, though, and the tension slowly eased.
Seneusia grasped Garux’s wrist. “Come on, brave rebel,” she said. “We’ve wasted the last daylight with that bastard.”
Garux grabbed Arvasia’s hand and followed Seneusia through the gate. He scowled when he saw how black the woods had turned.
As they stepped onto the path, they heard Ateran’s porcine squeal: “You will pay dearly for this! I swear that on my life!”