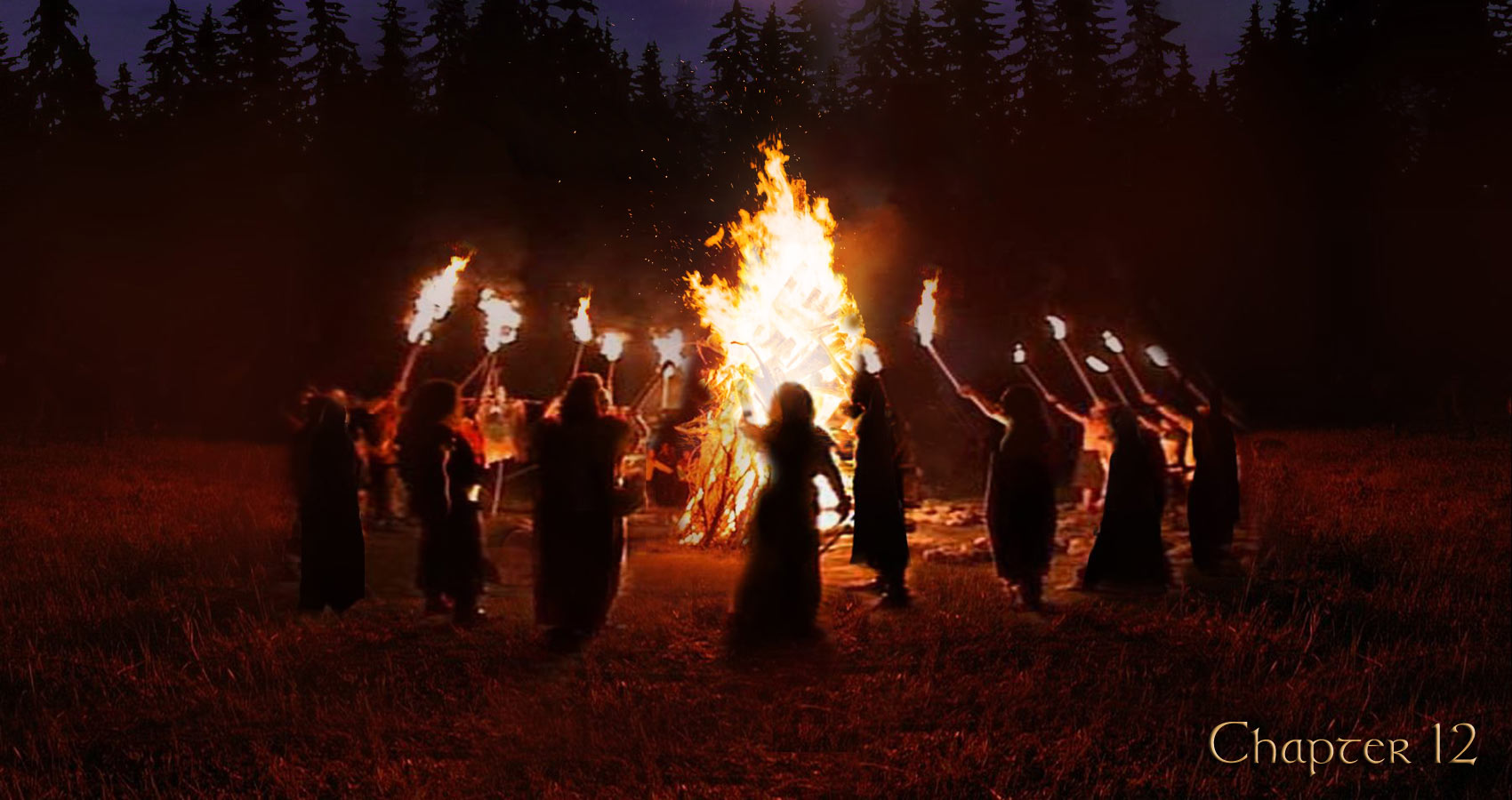 Sweat poured out of Garux’s burning skin for the rest of the day and deep into the night. As the sun sprang up, the fever dropped, and he opened his eyes. The light of the new day nearly blinded him, and he shaded his eyes and squinted. His head hummed, pain seared through his throat, and his muscles felt torn and bruised.
He sat up with a groan and looked around, trying to remember where he was and what had happened. When he saw the two arrows lying beside him, memories of the attack sank into his mind.
“Horeus!” he wheezed. “That filthy dog.”
Garux pulled down his shirt collar and looked at his shoulder and chest. Only two scabs bulged in places where he had expected gaping holes. He looked around the woods in confusion. How long had he been lying there?
As he recalled the blade of Horeus’s sword, his fingers flew to his neck. A fat, tender scab ran across his throat like a horseshoe whose ends almost touched at the nape of his neck. How could he have survived such a dreadful blow? What magic had sealed his wounds?
Fluffy white clouds glided over the blue sky. The leaves and twigs above his head flitted in a gentle breeze, and the forest brimmed with beautiful smells and colors. Garux recalled Arvasia and her dimpled cheeks, and he felt happy to be alive. And yet, a vague premonition had planted a seed in his mind.
He needed to ask Druidess Agira what his miraculous recovery meant, and to settle scores with Horeus. He only hoped the druidess wouldn’t think he was a spirit… and that Horeus’s treachery wasn’t the result of a wholesale conspiracy of the nobles.
Garux scrambled to his feet and turned for home, but then he remembered his mission. As he was too near the Marcomannic encampment to go back without the report, he headed for the quarry.
Weakness and dizziness made him shuffle at first, but he felt stronger as he walked on. The sun poured vigor into his veins. He ate a few handfuls of sorrel to moist his parched throat.
He walked along the fringe of the path, in the cover of the woods. When he smelled smoke and saw a few grayish columns coil above the trees, he skulked forward and climbed a young birch. Through the branches, he saw a cluster of large leather tents standing in a clearing among carts, wagons, and chariots. Horses and cattle grazed everywhere. The pitted hill of the quarry loomed above, casting a monstrous shadow over the encampment. Two sentinels passed along the edge of the clearing.
A few fires blazed in the center of the encampment. Men in sleeveless tunics hauled firewood and roasted game on spits. Closer to the foot of the hill, pairs of soldiers practiced with swords and battleaxes while others sat in the grass, watching them and cheering them on. He estimated there were between four hundred and fifty and five hundred people in the camp.
Garux’s tribe had about six hundred people. Celtic women were expected to engage in battles, and only elders and little children would stay in the town. It meant that a little over four hundred people could march on the Marcomanni. With an element of surprise, the Celts had a chance to win. Garux wondered whether Agira would rule in favor of the attack.