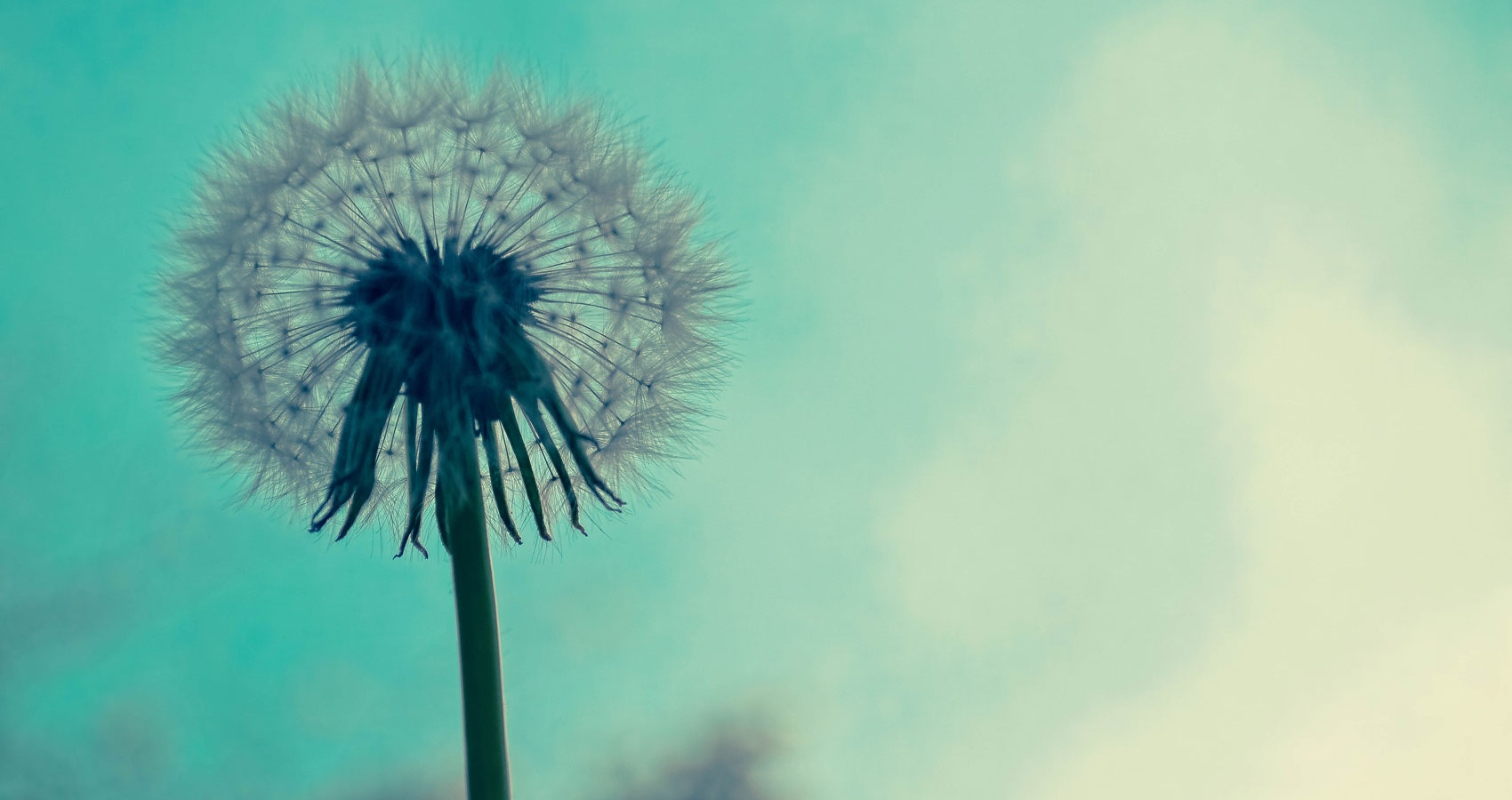 She called it Dandelion.
I didn’t question. How could I? I’d brought her to this place. And though giving it a name was troubling, I had no right to take offense. Not with what I asked of her.
Every spring dandelions (Taraxacum) make their debut; indiscriminately dotting the landscape with their fluffy white heads and with their arrival the ever-burning question of how to rid them from our lawns. I too, now have a dandelion to rid.

She pulled a bundle from her trunk. It smells of rubber and motor oil. She spreads out the knitted comforter on a sloped grassy hill, and we kick off our shoes, letting our feet linger just beyond the edges of the tattered fabric, tickled by the thin blades of uncut grass. The angle of the hill is steep, and at any moment I feel we might slide off into the endless galaxy. But gravity holds us in place.
The day is perfect, weather-wise. The sun is passive-aggressive among the clouds but stays long enough to warm the surface of her skin. She adjusts her sundress; it pinches between the ground and the blanket, bunching the fabric until I could see nothing but the fleshy promise between her legs. It wasn’t time for those thoughts I was quick to remind myself.
I let my hand drift over the delicate, pleated floral-print of cloth covering her stomach, trying to absorb the subtle vibration of life but I feel nothing.

Under the sun she unfolds like a plant.
As she opens, a little hole from a teenage piercing becomes visible below her navel. I don’t have the appetite to imagine a bloated belly stretched to its limits. I can only envision an unspoiled midriff as I work to deny the existence of Dandelion.
I explore the possibilities and debate which is worse, wishing for death or taking part in one’s demise. I was doing both and feared the universe would cancel out my efforts.
I forced; she had agreed, but there was coercion, for her body to do something unnatural. She began to wilt as fear and desperation filled her emotional space.

On Tuesday we accumulated a handful of natural remedies from the local co-op. Cinnamon and Papaya. Black, Blue, and Red Cohosh. It appeared as if we were not ending Dandelion but collecting the ingredients for an exotic dish. Wednesday night we scoured the how-not-to-be-mommy blogs, but without clear direction on dosage, we settled on everything. All at once.
By Friday we both have undeclared regrets. On the grassy hill, we lay stock-still, our hands interlocked, until laughter erupts, children. Their tiny voices fill the air with a symphony of promise. I can hear the patter of bare feet in the field, feel the flap of a butterfly’s wings on my face and smell the wet pant of a nearby dog. Everything around me declares its exuberance.
She feels it too and slides her panties past her hips and dips a finger inside, checking to see if it had passed.

Once the seed of a dandelion develops, the yellow petals dry out. Unopened, it resembles a fine green tube with a tuft of white feathery material peeking into the atmosphere with its insignificant reach. Over several days it will open and show a full cotton-colored head. Our Dandelion, under the current circumstances, may never reach this peeking-out stage.
We kiss. Not out of passion, but out of obligation.
I trace a bluish vein up her delicate arm, over translucent, soft skin. Just past the elbow, the faint thread disappears into the meat of her muscle. I watch as her chest rises and falls with grace. I am flush with consciousness and the realization that she was once someone’s dandelion.

Dandelions (Taraxacum) surround us. I wonder if one matters any more than the rest. We talk about it. We whisper of our love and dream of an impossible future. It’s difficult to speak of regret, and we leave most of what’s inside unsaid. I understand we have different things to protect.
I love her, but it’s complicated. We represent opposite sides of an unsolvable equation. Around us, dandelions stir, and the wispy filaments drift across my face. A breeze catches the mischievous fluff and carries it away.
I imagine the seed traveling a great distance and parachuting into a new life, in a new location. The seed has a freedom I do not have.
I wonder if our Dandelion has settled into the soil of her womb. She is young, and her conditions are good for germination. If we had waited, Dandelion would have developed a broad, central taproot, and begun robbing her of nutrients.
If removing dandelions from your yard seems like a never-ending battle, it may be because cutting the blooms never slows the plant. Removing the taproot is the only way to stop the life cycle. We are trying to render our Dandelion stalkless, but nature is a persistent sculptor. And I begin to question whether we should have interfered.

As frustrated gardeners everywhere plot the demise of the gauzy white sphere, we lay on the grassy hill soaking in the sun, where our Dandelion, unbeknownst to us, has already broken apart inside her.