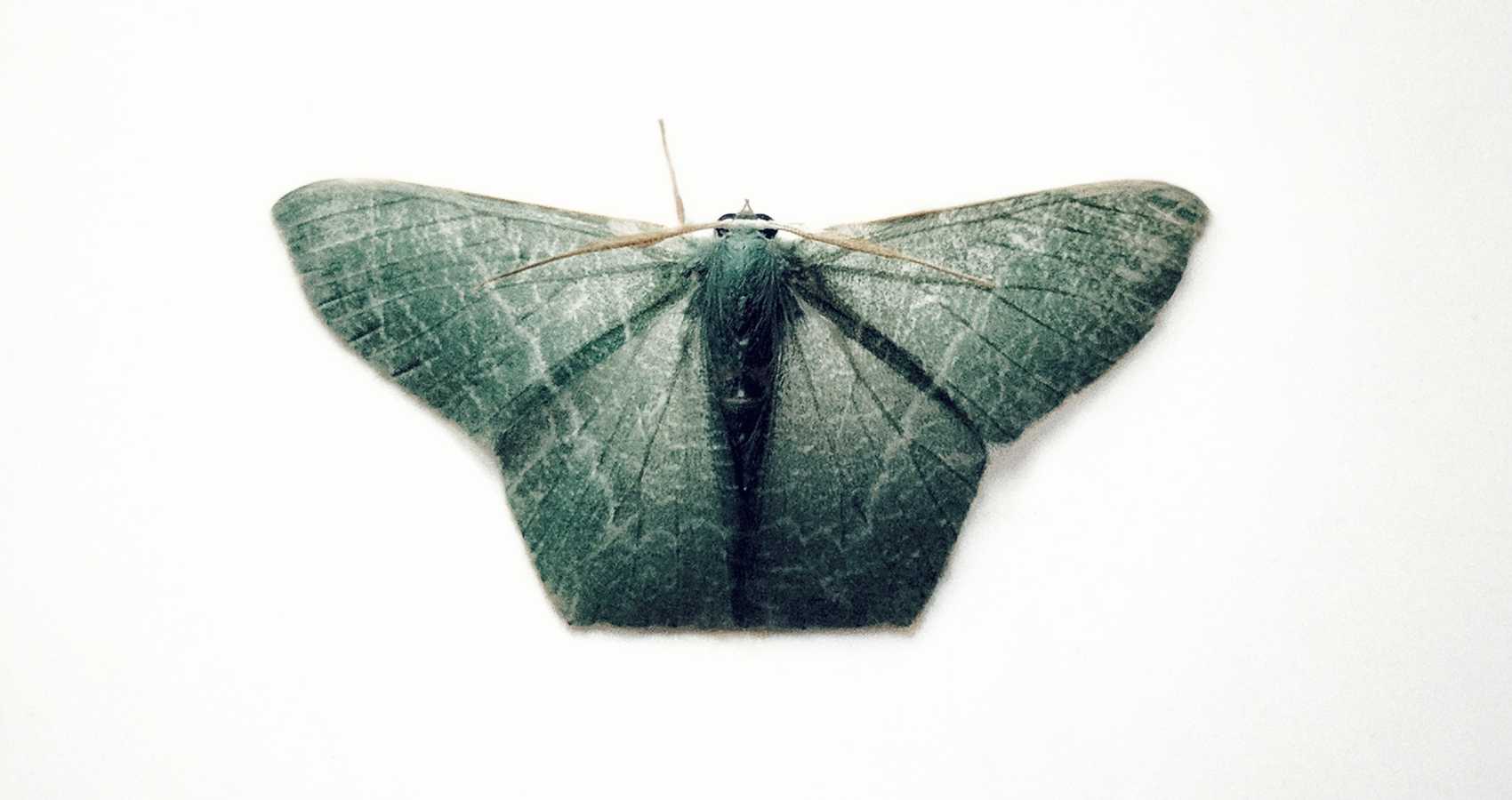 Death of The Moth

Death of The Moth

It died amidst flutters and spasms. What beauty weighted its white flight now lies intestate. I’ve made a small shrine where it expired. I have found faith: Deum, Deum…even the smallest creature. Did I throw the moth into the soft August breeze believing it would take flight in a parallel universe? Or did I leave it as a symbol for future reference? Nothing is conclusive. Nothing is really rememberable.
Since the moth’s death, my withdrawal has worsened. I shudder at people. Sometimes I see a look on a person’s face and want to say: Who do you think you are to smirk like that, to look so pleased, to wear feelings like a flag, like a fluttering moth your smugness has yet to smother? When I encounter someone with their feigned emotional concern, I want to ask: Don’t you see how the moth flutters from your moist lips, shiny in the rose of dusk?
Yes, much has altered since its demise. Sometimes in looking at the spot where it expired, I begin to pray; my lips move slowly, barely perceptibly, except for the slightest vibration from my thoughts and the words of my devotion. This vibration—the hum of the universe, the music of the spheres.
If I should go mad, I think to myself, I’ll never know it.
So many die every day, their lungs failing, the medical staff ambiguous; they would like to get another patient in from out of the hallways. Maybe the moth symbolizes them. The living avoid one another. I find this more honest. What we have always spread is falseness.
Now I know what’s inside my own four walls in a way I certainly never imagined I would know. I have always been a loner and rarely venture out. I’ve changed the title of my journal to Journal of the Plague Years. It had started out as one year but what we’re living through now is endless. Defoe’s title is brilliant: A Journal of the Plague Year: Being Observations or Memorials, Of the most Remarkable Occurrences, As well Publick as Private, which happened in London During the last Great Visitation In 1665. Our world mimics this plague.
Yesterday I invited an acquaintance over to show him where the moth had died. I invited him for this express purpose. He was hesitant and looked visibly shaken—puzzled. I began to pray and moved my body forward and back. He looked at me as if I were going mad. Even in reconstructing the event in my mind’s eye, I half expected to see its paper-thin wings flutter, to take flight. He began to shake me. He asked what I had been mumbling. Without thinking about its strangeness, I remarked, “I was praying. Deum, Deum. I have found faith.”
While sleeping one night a few weeks later, a turbulent dream awakened me: Wild with lust, I’d hated the object of my desire—a deformed creature, a giant arachnid, a product of unhealthy wants, debilitating and gross passions. We committed savage rapes of revenge on each other’s flesh and laughed all the while. Roused from the dream, I heard a tapping at my window and opened it. In blew a lovely moth, an agent of God.
“You’ve come just in time,” I communed.
It began to transform itself into a beautiful, dark woman. Her hair smelled of the nectar of tropical fruits, and I could see her skin breathe. She shone with a soft, wet luster in the moonlight. That such a beautiful creature should exist! Before I knew it, we were entangled in a sea of lovemaking. After a while, her lips troubled me as her face began to alter. After the final spasm, after the last wave of godlessness wrecked our bodies, I looked at her, I screamed out—the horrible creature in my dream!
After that unforgettable night I slept off and on, both day and night. Finally, one morning I was awakened by a policeman shaking me and asking if I were alright. Neighbors had been concerned, then alarmed (or so they said, not admitting they were just nosy). So concerned they’d summoned the authorities telling them something bad, probably violent, might have happened considering how strange I was. The man asked if I minded if he had a look around. In my confused condition I told him to search, to be my guest, to search and scrounge and scavenge. For I was sure, I was convinced I said, as I came more to my senses, that he would find nothing.
Nothing.

Marc Frazier has published poetry in over a hundred literary journals online and in print. Marc, the recipient of an Illinois Arts Council Award for poetry, has been nominated for a Pushcart Prize and two Best-of-the-Net Awards. His three full-length poetry books are available online. A new collection is forthcoming in 2023. Marc has also published memoir, flash fiction and essay. He is a Chicago-area, LGBTQ writer who is active on social media.