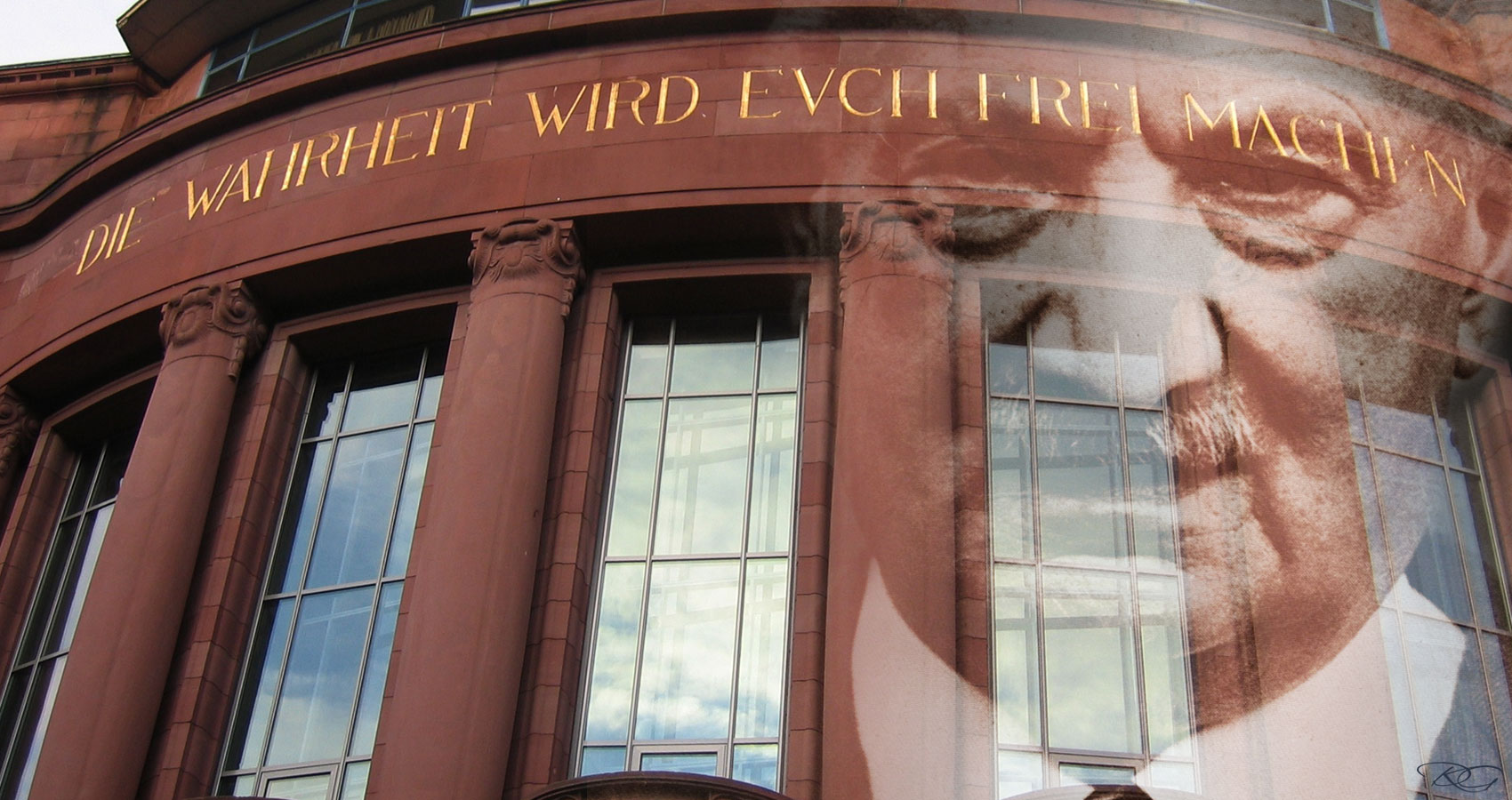 The Silence of Existence I

Plato once said:
‘Megala panta episphale,’
Questionable,
Destined to fall,
Endangered.
This was Plato’s philosophic answer
To the tyrant Syracus,
Who was doomed to fail.
But why did I follow
Plato’s words,
And took them
To a heroic sturm-and-drang?
It is true,
I sympathised with the inner truth
Of the National Socialism,
For a short while.
But this short episode cost me
My very existence.
The human being has to grow big
In his own self,
In order to see big movements
And to be aware of it.
I came from a small family,
Didn’t want to be involved
In petty matters,
Donning the mantle
Of stubbornness and refusing
To accept new challenges.
I wanted to understand
The secrets of powerful men,
To ultimately be a part of them.
But in the course of time,
The powerful persons for which I yearned,
Changed their countenances.
My philosophic thoughts
Dwelled on my homeland,
God,
Existence,
Being,
Nothingness,
The German folk,
Original thought and great poetry.
Towards the end came the planetary technology,
Which grew big.
My works of philosophy
Went through the illusions and catastrophes
Of the 20th century.
All striving for greatness
Leads to downfall.
At the beginning of the war
The German nationalism was awakened.
The people were collectively enthusiastic,
Hitting us all,
Like a tidal wave.
I didn’t care much
About what was happening
Around me.
In my thoughts I was living,
Thinking about people in the Middle Ages.
I was following a metaphysical imperative.
In the battlefield of Verdun,
Half a million soldiers perished.
But I was disappointed
For I didn’t get a professorship
At the University of Freiburg.
The Führer once wanted to be an artist.
I wanted to be a priest
The Jesuits and the Catholics in Freiburg
Turned me down.
Similar to Friedrich Nietzsche’s
Forty-year old Zarathustra,
Who after ten years of solitude
In his mountain cave,
Went down to the humans,
To teach them the incredibility
Of being,
The meaning of their being,
I also wanted to reveal and teach
The essentials of human existence,
Which deals with one’s own being.
For the world of being or Sein,
Is not only the self-world,
But also the world of togetherness,
In which the being-in
Is always the being-together.
Existence is threatened by anxiety,
Behind which lies
The temporality of existence.
The aim of philosophy
Is to listen to the silence of existence.

The Führer of the Mind II

In his ‘Seventh Letter’ Plato wrote
About his three journeys to Syrakus and Sicily
Between 389 and 361 BC.
Plato had close relations to the ruling tyrants:
At first with Dionysios I,
Later with his son Dionysios II,
Whom he tried to educate and lead.

Among other philosophic questions,
Socrates had to answer this one:
In which way does a state have to use philosophy,
In order not to go under,
For all greatness is questionable.
Plato was defeated in Syrakus,
Because Dionysios II refused to overtake
His ideas about State,
Education, laws and constitution.
Plato became frustrated.
His state-philosophical plans had failed.

I hoped that history would repeat itself,
This time with a happy result.
So I chose Plato as my own hero,
For the political battle,
With Adolf Hitler in the role of Dionysios II.
On January 19, 1933 after the big elections victory
In Lippe,
A great storm has come over me,
In which I’ve set out my full sail.
With this, a lot of old ties
Were torn or broken.
I can’t mend them now.
O what a storm it was,
In which you and I and all
Were swept away.
It was the greatness and exemplary Greek philosophy,
Waking up anew,
Albeit, the dark orders of a state and society,
Undergoing a massive change.

After Hitler was given the right
To govern by the old Reichspresident
Paul von Hinderburg,
My will to work for the Third Reich
Became stronger.
In order to stabilise the NS-rule,
My philosophy became a part
Of the Nazi ideology.
I had my doubts when deeds were done,
To lift the needs
Of the folk and the Reich,
But I believed that the political changes
Were a challenge to me,
My country needed me.
Between the Greek philosophy
And the NS movement,
I wanted to fight
Against the dying spirit of Christendom,
And the spectre of the communist world.
The Greeks and the German folk,
A politic of Being and Führer-state,
Plato and I myself.

I was a convinced National Socialist,
At the beginning of the Third Reich.
It was in the solitude
Of the autumnal and wintry Black Forest,
That I decided to be involved
In building a world,
Created by a folk.
That was the new reality.

The ‘Being’ I’d learned from Parmenides,
Plato and Aristoteles,
Should be used to make the NS-spirit,
A part and parcel of German history.
The NSDAP became my political home.
The Rectorat gave me the institutional confirmation.
I became a member of the NSDAP
On May 1, 1933
With the No. 3125894,
Gau Baden.

Back From Syrakus III

My first act as the Rector
Of the Freiburger University,
Was to send a circular letter
To all lecturers.
The construction of a new mental world,
For the German folk is the essential duty
Of the German university.
This is national work
Of the highest meaning and priority.

In 1933 I craved for power,
In the field of Political Science.
I wanted to be a Führer of the Mind,
To create a real geistige world
For the German folk.
I found a suitable forum
In the NS-Führer-State.
I greeted the Freiburger students
With the authoritative imperative words:
‘Not teachings and ideas
Are the rules of your being.
The Führer himself alone
Is the German reality
And your law today
Till hereafter.’

The teachers had to be taught again,
So I transformed my philosophical thoughts,
To political activities.
Again and again,
The being, the Germanvolk,
And the Führer were connected
In all my speeches.

At the beginning of 1934,
It became clear to me,
That the greatness (Hitler) which I desired,
Was destined to fall.
I noticed that the liberals and conservatives
Were disgusted with Hitler’s propaganda.
Erich Jaensch characterised my philosophical thoughts
As ‘tamundic-rabulistic,’
Which would have a magnetic attraction
For Jews and people of Jewish descent.
To Erich Jaensch,
I was a dangerous schizophrenic
And my pathologic writings
Would only be admired by weird people.
Ernst Krieck saw in my philosophy
A ferment of decay and decomposition
For the German folk.

I saw in the Führer not the egocentric powerful man,
But an instance of political knowledge,
With a concentration
Of the new spirit of state-and-folk community.
There is only one will for the state to exist.
The Führer has awakened this desire
In the entire folk and made it
To a common goal.
In lieu of the objective he-she-it,
I preferred the meaning of being ‘I am.’
I became a follower of the NSDAP,
The propagandist of national socialism.
I wanted to see people who had the will,
The inner power to make greatness even bigger.
Most people made the usual snarls
Of ordinary citizens,
Who cling to small and half-things;
They don’t want to see,
Never can see the big and farthest,
The unique and all-powerful.

My friends wrote to me on my 80th birthday:
‘Mr. H.,
Are you back from Syrakus?’
Back from my escapade.
I felt like Plato,
Who was disappointed by Dionysios II.
My disappointment was much bigger
Than that of Plato,
Because the tyrant and his victim,
Were not beyond the seas,
But in my own country.

My thoughts moved to Being,
Das Sein.
In my search for heroes I came across:
Parmenides, Heraklit, Holderlin and Nietsche.
I abandoned political thought,
Embraced the thoughts of the poet,
Poetic thoughts,
For in the language of poetry,
You find the purest essence of language,
Which can begin and develop.
I wanted to show that language
Is not an expression of biological-racist humans.
The essence of humans through language,
Is the basic reality of the mind.

To the Nazis I became suddenly
A suspected person,
Who needed to be shadowed.

Martin Heidegger Trilogy: This trilogy is about the German philosopher Martin Heidegger who became a rector of the University of Freiburg during the Third Reich where he not only made friends but also enemies. To an ordinary mortal he looked like a power and position hungry person. He retreated to Todmoos in the Black Forest and was later rehabilitated. These poems are an attempt to get into the psyche of the philosopher…