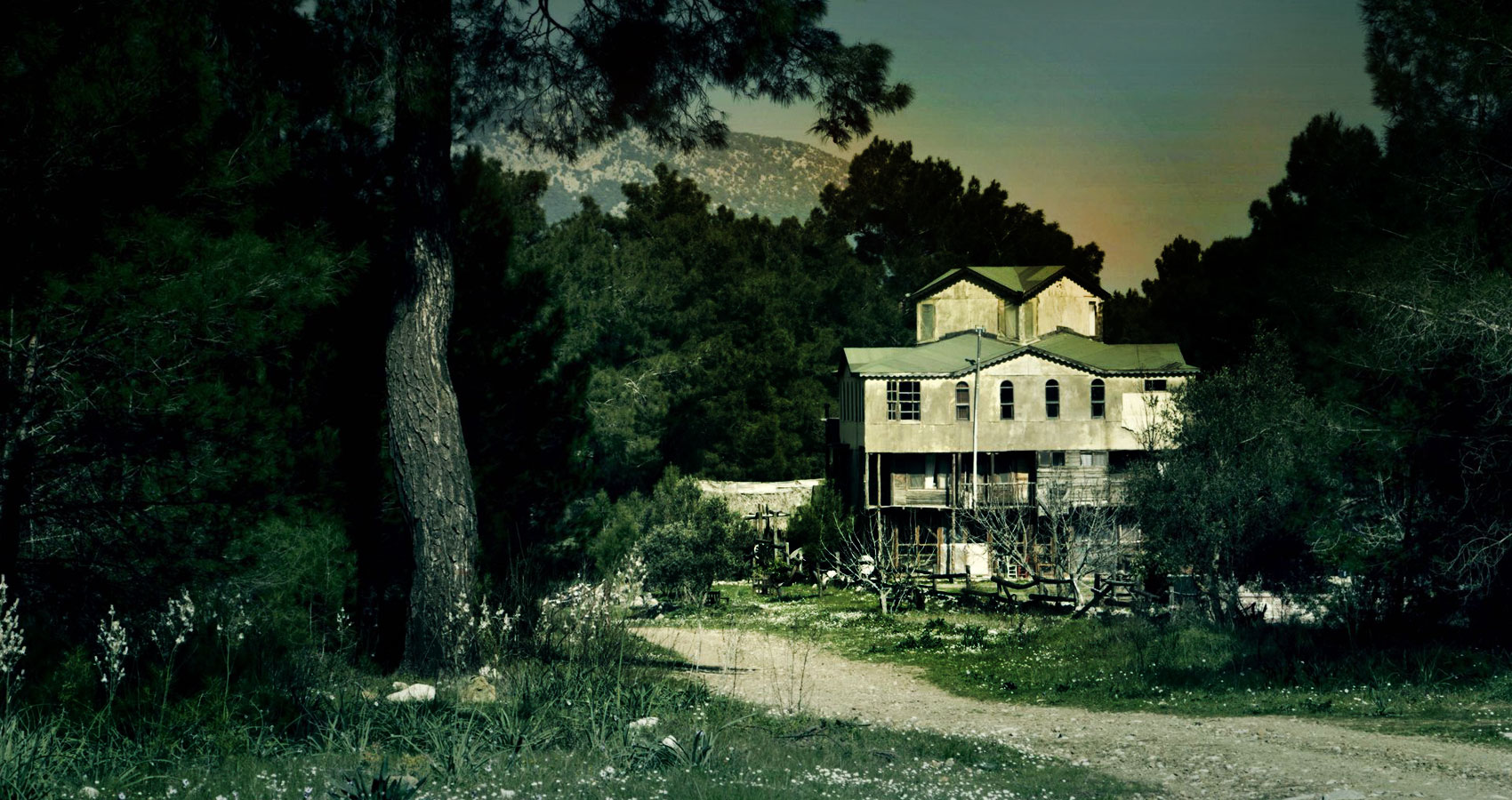 The house stood somewhere in a dark part of America, at some foreboding crossroads under ominous clouds. A house that probably also existed somewhere outside the psyche of a rebellious woman. An orange tint in the sky looked as if scumbled on by a half crayon, conjuring the doubt of reality, that Hannah had many times when walking through this door.
Not exactly knowing what was her purpose here, it was all too familiar. Every room, every piece of furniture and every bizarre antique placed the same as before. It was as if it were choreographed, her every step. This residence seemed to be very linear. One floor and a basement. The light green carpet was odd but all the decor seemed to fit right in like flowers in the grass. What was it she was there for? Once again she would seek an answer. She walked forward seeing a crystal decanter on a mid-century modern end table, and a thin davenport next to it that looked less than cozy, but she never sat on it. A cheap Rockwell print hangs above on the plain white wall. But this long room wasn’t where she spent most of her time when here. It was the basement that always seemed to attract her. It was something she felt she needed down there. She couldn’t recall what it was. That is until she experienced it again.
She remembered that going down there was not good. She descended the stairs and stepped onto the Berber carpet of the basement room, it stretched as did the first floor. There was a game room and bar with brown upholstered stools. A pool table with green felt top, and numbered balls constrained in a wooden triangle. It looked normal enough but a sudden movement from the corner of her eye reminded her why she hated this place. U-Haul boxes sat stacked on the floor on the left. She heard her name being called out, it was her mother’s voice! Like she was calling from inside one of those boxes but from another direction. Then from behind her came the whispers. She turned and no one was there. A violent shove made her gasp and put her on the floor, She turned quickly and again no one. The pool cues inexplicably flew from the wall rack one by one like spears at the mirror behind the bar smashing glass and frightening her terribly. She got back to her feet.
She then heard a voice whisper,”Bitch!.” Her body tingled with fear.
This is what she cannot understand why she keeps coming here repeatedly. And she forgets what is here every time,
Evil.

9160 is the address numbers near the front door but what street and what town, remains a mystery.
She’s pretty sure it’s not Chicago, where she now resides, the sounds and smell of the city aren’t ever present there.
A different voice yelled “Hannah!” muffled as if trying to scream from another dimension. The mirror is now fixed behind the bar and reflected things that were behind her, dingy looking human forms in black. Three of them that didn’t quite look complete and they seemed to dissolve as a light grew bright behind them.
Hannah gasped, but In her mind, she knew it couldn’t be real because nothing behaved as it should while here, not physics, not even being able to put things together in her mind as she should see them. Atoms lazily floated together and broke up like a TV picture when its signal is lost.
She tried to move her feet and flee this horror, but her legs wouldn’t respond to her mind’s command. She’s in a trap again. The three figures move closer to her their faces more gruesome the closer they come.
One of them spoke, “You remember us!”, this came out like a snarl.
Hannah panicked “No, what do you want?”
“Your flesh, bitch!” She quivered and closed her eyes. The last thing she heard was “Ravenna.”

Hannah woke up from her sleep. “Ravenna!”, she said in a daze. Austin woke to this and said, “What did you say?”
Hannah mumbled, “Mm what?”
“You had that nightmare again!” Austin said as he wiped the sleep from right eye.
“I guess so — yes”
“What’s Ravenna?” he asked.
“I heard that in the dream, he said it!” Hannah replied.
“Who, one of the deformed dudes?”
“Yes…I’ve had this dream for the past year and that’s the first time I’ve heard that. I don’t know what it means.” She looked paler than usual.
“Maybe it’s the place…do you ever remember anything or anywhere by that name?” Austin wondered, he grew worried about her waking this way so often, and he wanted to get to the bottom of it. They had an eight city tour planned that their band was starting in September. Her singing voice sounded weak when practicing last Wednesday. Lack of sleep maybe, yes, but she has grown so paranoid lately, and these dreams are probably why. Besides that, he loved her and wanted her to be the crazy carefree girl she was when they met three years ago. They had met at a club in Chicago, where she was singing with another woman, who played acoustic guitar. He was struck by her mournful voice and her looks, she was a modern day Louise Brooks. He had asked her to join his band and she did. They immediately became romantically involved. It’s been up and down with her but, he couldn’t imagine being with anyone but her.
Hannah thought for a moment,”Ravenna, it’s in Michigan !” Her dark eyes lit up.
“Michigan?” He said cocking his head.
Her bobbed black hair glistened in the dawn’s low light as she gathered her thoughts. “Um…it was a place near where I grew up…in Michigan.”
“I thought you grew up in Passaic?” He stated, scratching his bare chest.
“I did for the most part, but when my stepdad was looking for a job in the early 90s, we moved to Grand Rapids for a year and a half. I was like 9 years old at the time.That didn’t work out so we moved back to New Jersey.”
She reached for the bottled water she kept by her bedside, and swallowed a gulp, she held it out to Austin. He shook his head, “I’m good….so you used to live near a Ravenna? That could be key to your freaking nightmares!”
“Or it could just be more bullshit!” she countered. She climbed out of bed and went into the bathroom and sat on the toilet. She sat there staring at the white lace panties around her ankles and remembered something from the 4th of July weekend in 1993. Her stepdad announced to her and her mother that Friday they were going back to Passaic and by Sunday they were back in New Jersey, with moving van in-tow.
“Why did we leave in a rush like that?” she whispered.
She had a hard time remembering that period for some reason…really anything before that time, she only knew from stories her mother had told her, it always felt like she was talking about someone else because the stories couldn’t jog her memory. Hannah just chalked it up to her alcohol abuse in her late teens. She hit the Bacardi pretty hard back in those days and had been sentenced to juvenile detention for a period after one of her drunken incidents. She had smashed her boyfriend’s car into a privacy fence in an east side neighborhood when she blacked out at the wheel.
Austin walked in the bathroom nude and said, “Take a shower with me, we need to hit the road.”
She squinted “Okay….and where are we going? ”
He pulled back the clear shower curtain and cranked the hot water knob. “We’re going on a road trip, to Michigan!” Austin said turning his head to see her reaction.
“What the …, why?” She said, bewildered.
“‘Cause we’re going to get to the bottom of these god damn nightmares that are stressing you out, so you can sleep at night. This has been going on way too long!” He climbed into the steam filled shower not waiting for Hannah to argue against it. He heard her mumble something, and then she opened the curtain and joined him there.