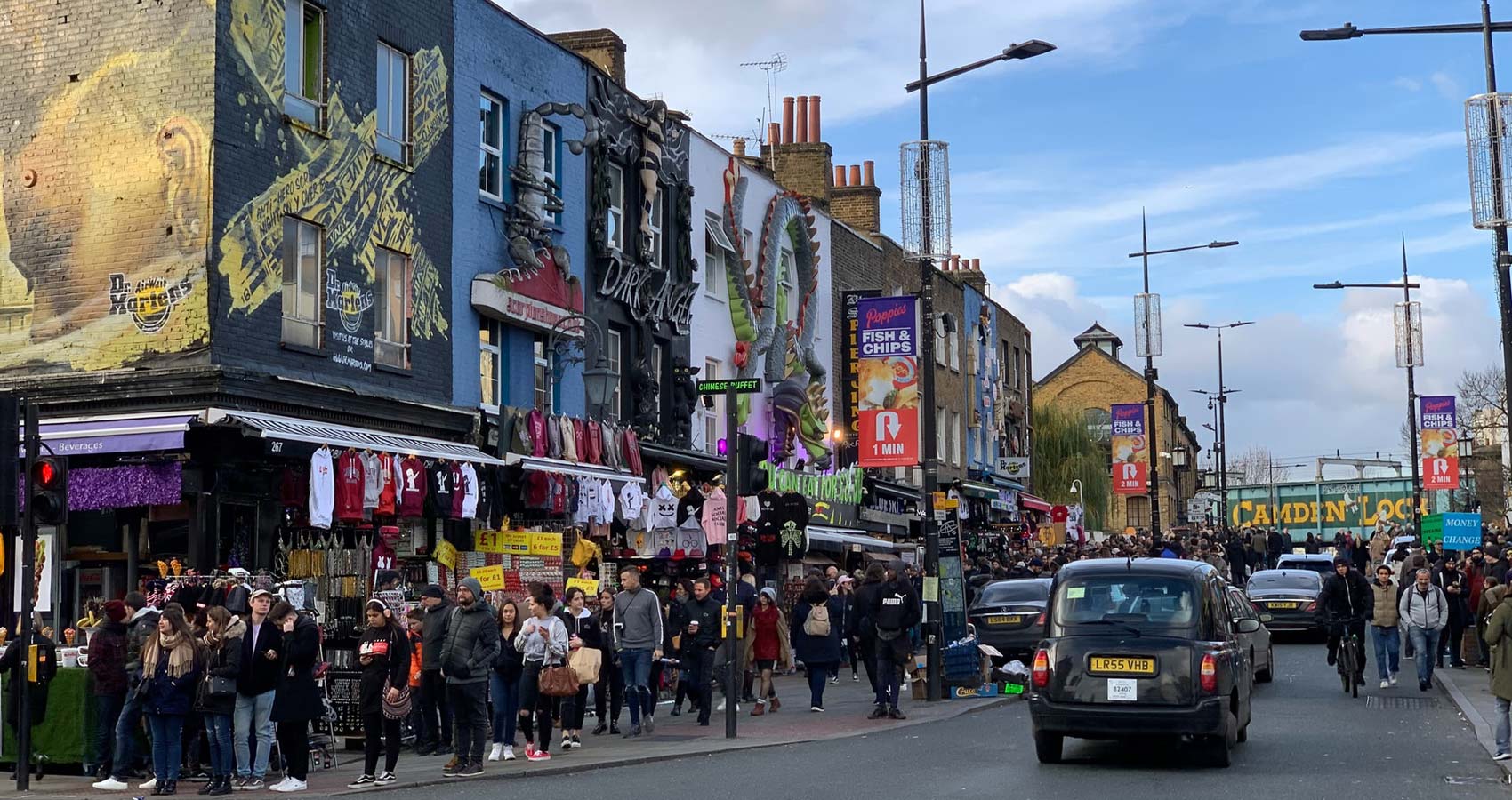 Out of Her Depth

Out of Her Depth

As I left the Underground, I stood rigid for a second. This is not my kind of place at all! Look at all these weirdoes!
I gathered myself and pushed on.
I weaved in and out of the Spanish backpackers, the casual observers, the falafel eaters; the so-called beautiful people. My heart was missing beats.
I was away from the coziness of my town. Away from the ‘girls’ nights out’; the constant exchange of boyfriends. The comfort of endless, meaningless gossip. But it was my town and my life and I liked it that way!
The cramped bustling markets and stores, overflowed with Doc Martins, outrageous glasses, skimpy tea-shirts. Retro in the alcoves, tourist trendy tat.
Drum and base the soundtrack for jugglers, buskers, the masses of sheep herding up and down the high street.
Tarty, cheap. The words passed through my head, exiting at the turn of my nose, as I browsed the stalls.
Good-looking pierced girls posed, talking loudly. Which clubs were ‘in’, who was ‘out’.
They showed little interest in their work. Occasionally swaggering over to groups of Japanese students.
They looked me up and down, turning their heads with sniffing sighs.
My secretarial black skirt was cut just above the knee. Smart but classy. My dangly earrings and bracelets were silver, but seemed cheap now, somehow.
In my small Midlands town, I was someone. Away from the dressing up in ya best and copping-off on a Friday night scene, I was viewed as an unfashionable straight girl.
Well, I was here! In London. In the ‘happening areas,’ I’d read about.
Tourist infested, commercially over-run. The mainstream alternative.
I took a seat outside a Portuguese cafe and ordered tea with milk.

The dark-skinned, sunken checked waiter, laid down the tea and waited impatiently for payment. He was too busy to care. He was busy double cheek kissing and ciaoing a string of bear bellied beauties.
I held my cigarette awkwardly like I’d just started smoking that week.
What the hell was I doing here?
I’d met Trevor at one of those work ‘dos’ Seminars for the new upwardly mobile working class.
The kids whose patched together families were put into the new towns in the ’70s. The kids who’d done all right at school, then taken up the ‘chancers’ jobs at the end of the Thatcher years.
A little computer knowledge, a couple of O-levels; smart appearance, a willingness to get on.
Drive and want being rewarded with company cars, package holidays to Greece, gadgets and mortgages.
I had bought a house just down the road from me mum.
Bought it with Darren, a self-employed carpet fitter. Jealous type. Football on a Sunday morning. Out with the lads on a Friday, out with me on a Saturday.
Even in a curry house, Daz ordered chicken and chips.
Not like Trevor.
He’d impressed me when we’d first met. He’d even talked over dinner. About wine, travel, music, a bit of politics even; and only a smidgen of football.
But he had talked to me, and had asked me questions.
I had felt comfortable and excited. He hadn’t tried to out-think me, outdo me; conquer. He listened.
He had liked my hair, and the smell of my perfume, he hadn’t thought it too much.
We had talked and drank late into the night.
We had had a fumbling fuck in my room.
He was gone in the morning. I didn’t remember much, only a few nice words. We chatted again, sneaked a drink during the leaving buffet, which we couldn’t eat.
We had kept up an erotic correspondence, by work email and skype sex on home laptops when everyone else was asleep.
He had arranged this meet, in Camden, where he lived.
I twiddled with my earrings. My shapely orange tanned legs drew glances, but only From the Black guys outside the jacket shops, the Asian guys on the bag stalls, the Turkish guys at the food kiosks.
Trevor arrived at last.
He kissed me on both cheeks, which took me back a little.
He was casually dressed.
Blue Fred Perry shirt, Khaki shorts and a pair of those mountain climber sandals everyone was wearing that summer.
He ordered a Cappuccino and a Pastel de Nata.
He half-heartedly asked about work, my boyfriend.
He couldn’t and didn’t wait to talk about how great it was to live there.
All the personalities he knew or had seen, at such and such club, or bar or Bistro.
I noticed how he nervously kept rubbing his temples, and jerking his head around, and talking a little bit too loudly.
When I talked, he answered with quick yes’es and no’s.
He kept interrupting me and flicked his eyes all around the busy pavements.
I thought I’d grab the nervous baby bull by his not so big horns.
‘Can we go back to your place?’
‘Jesus, you are keen!’

I wanted to get away from this place, try to get somewhere where I felt more at ease.
‘I’ve come a long way you know!’