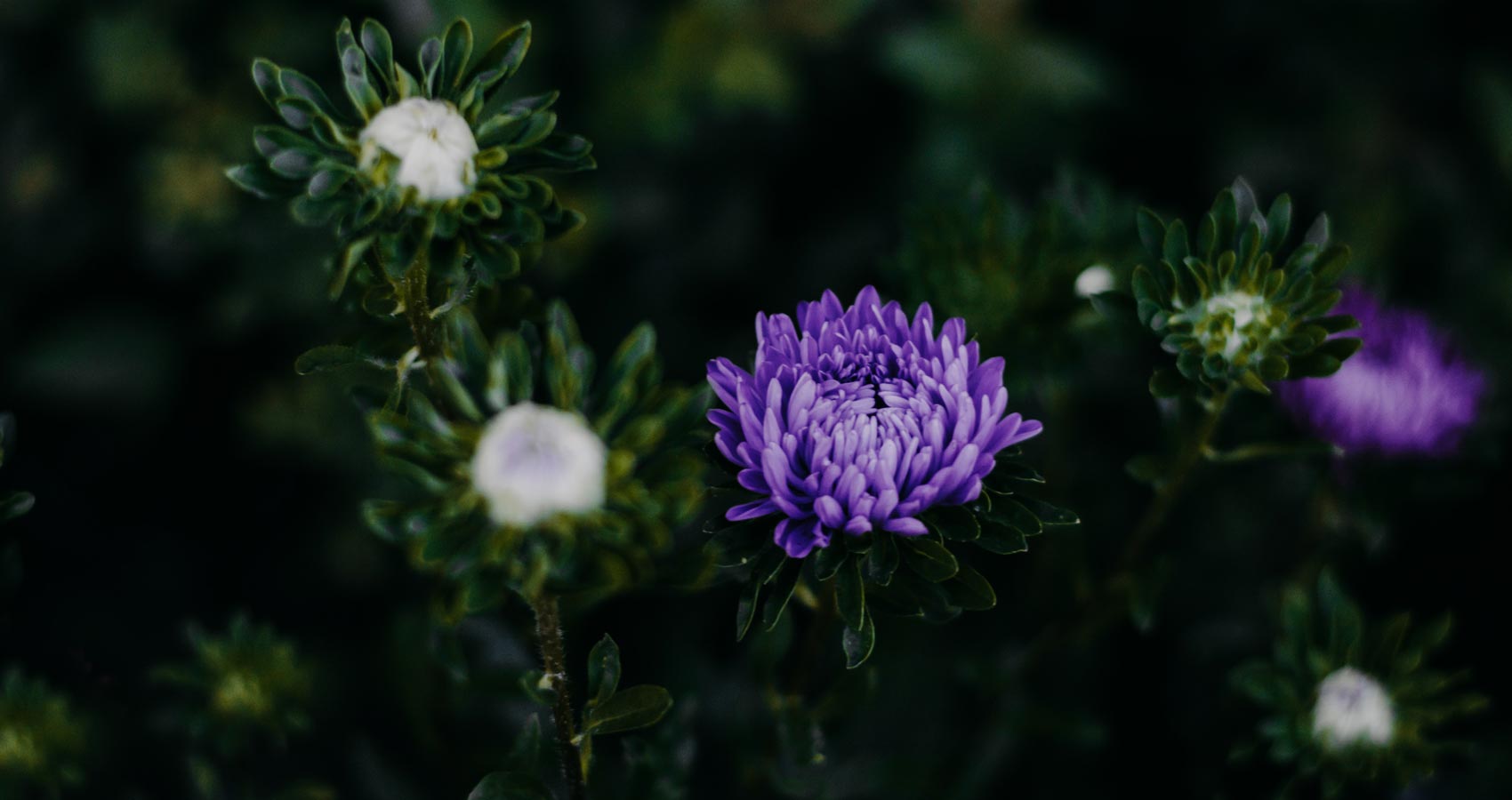 Besides her clouding thoughts, the Wet May breeze Cuddled Gina in its sweet embrace, She first stared at the red and white roses, before her eyes caught the vibrant yellow flower, with no sun to face, they still looked beautiful. She remembers when she had planted only one sunflower in the garden, now they were uncountable, brightening the place altogether. That was what she lacked. There wasn’t anything to brighten her life, her marriage. She took her eyes slowly from the flower and raised them above her. The sky shone in its blue veil and sparkling minions keeping her company, everything seems in place except her life.
How could the sky be so beautiful at a time like this in her life?

She wondered if a Supreme being was up there?
If there was a God up there, was He celebrating her loss or what?
“There couldn’t be a God up there!” She thought out loud with conviction. If there was, she would have seen Him since the sky was way too clear today. Besides, if she couldn’t see Him, she could have at least felt his presence in her life.

Gina didn’t realize when another person joined her in the garden, not until she felt her husband, Andy, hugged her from behind and wrapped his hands around her belly. She flings from the contact that was supposed to be a comforting gesture but triggered bad memories instead— good memories that were crushed earlier that week.

“Don’t beat yourself up so much, just trust in God that everything will be okay,” Andy whispered, his head tilted to face her. She wishes her heart hadn’t connived with her face to broadcast anything it felt.
There he goes again with this God thing. Her inner demons snapped but her lips remained kissed. She pictured God sitting with his legs crossed, on the highest of chairs—a golden chair, staring down at his creatures—her, with a smirk decorating His face. How could He watch all of this from up there and say nothing, do nothing, yet everyone asked her to still trust Him?
Gina wished she could really leave all this in the hands of God. She wished by now this didn’t affect her as much as it did—it wasn’t the first time. Shouldn’t she be used to it by now?

She couldn’t forget the first incident. It was still fresh in her mind like it happened yesterday. It was one of those cold mornings, she had finished preparing breakfast for the family—her husband, her mother-in-law, and her sister-in-law who came visiting the previous day with her beautiful five year old daughter. Her husband left for work, her sister-in-law also left later in the day. After cleaning the place, she had rested a bit before stepping into her Kitchen, her second favorite place in the house, to prepare lunch.

Mama was the first person to see it as she had asked “my daughter, did you hurt your leg in the kitchen?” Mama had asked pointing at her feet. She still remembers her very first terrified scream when she saw the crimson liquid flowing down the length of her legs.

Just like that, she lost her first bundle of happiness.

The doctor said it was stress, but what could she do, she was a newly married African woman and she had a home to run. There were expectations to meet, responsibilities to shoulder.
Andy played his husband role well, he was brave standing right beside her throughout her wailing and muffled sobs. Thanks to a loving husband and an understanding mother-in-law, on her next trip to happiness, she didn’t do anything, she didn’t clean or cook, she had Fadiha, her help for that. She still lost her second joy and third in the matter of two years of marriage.

Two years of broken expectations
Two years of repeated sorrow and gloom
Two years of remorse and downheartedness
A never-ending process of denial, anger, guilt, depression, then when she finally brought herself to embrace what happened, faith crushed it again and again.

The first one, sympathizers trooped in to console her for her loss and asked her to be patient and wait on God. All that was comforting at first till it just wasn’t over time.

The next one, they called and by the third one the few people that came didn’t come to offer her their comfort but to tell her gossips, rumors, and lies; her mother-in-law was killing her unborn babies, her husband was using them for money ritual, God was punishing her for a sin she committed in the past.

With every passing day, her faith in God diminished in multiple folds and she couldn’t help but watch it slip. The motivational videos couldn’t even help her.

“Bring my daughter inside to rest, she must be tired” Mama shouted from the window overlooking the garden.

Maybe there really was a God up there, who had sent her another mother for a mother-in-law. All through these trying times, Mama has been very supportive. She didn’t taunt her to give her a grandchild. She didn’t pressure her son to marry another wife, she even stopped her daughter from visiting frequently with her two kids.

What happened to all the dramas that mother-in-law’s staged in the African movies that she had watched?
Those taunts from movies got stuck in her head that she got suspicious of her husband at times. Maybe he had another family elsewhere. She has seen that in the movies!

Then she witnessed her first real movie; the rush with which her husband left the house that morning after receiving a call without telling her who was on the phone was too suspicious and she couldn’t let such an opportunity of catching him in the act go.

She ignored the silent yet warning eyes of her mother-in-law and went ahead to trail her son.

She wasn’t surprised when from afar, she watched her husband with his other family, his wife and two kids.
She couldn’t bring herself to be shocked, since she had seen this scene countless times in movies, memorized the lines even, Like the one word the kids chorused before hugging her husband, their father: Daddy. Or the see you later, love you that their mother, her co-wife said waving cheerfully. She skipped the final piece to the puzzle though, — in the movies, they always ceil it the warm goodbye hug that always raced through the man’s heart throughout his day at the office. The puzzle was complete without it anyways.

She walked back home exhausted after her trip to the ‘movies’.
She couldn’t think straight, she was hurting and she knew she was the cause of everything; if only she could give him children.
She didn’t run home packing and cursing at her husband like in the movie though, she politely brought the issue up that night when they both retired for the day.

His cheating didn’t hurt much but his denial, she couldn’t take.
Nothing hurts more than knowing the truth and being told that was a lie.
That night, Gina slept with her mother-in-law. The woman didn’t try to defend her son and she appreciated it a lot.

Gina found herself at the same place after a long while— her garden. This time, her gaze was fixated on the laminated card bearing a handwritten, Patience Gina!, that was attached to the oldest Aster flower in the garden—It was a gift from Andy. Aster flower now occupied as great a space in her garden as its meaning—patience, in her heart.
She remembers the sequence leading to the gift. Her mother-in-law had woke her up late in the morning to prepare for the arrival of some guest. Yes, Andy had the gust to invite people to their house after committing such a crime. An hour later, Gina ushered in Andy’s boss and his family, a woman and two kids, all familiar — the same woman and kids from Yesterday. She realized how stupid she was the previous day. Up close, the kids were a total replica of their daddy, Mr. Farouk.

“Thanks so much for yesterday,” Mr. Farouk said when Andy joined them seconds later.
All through dinner, Gina wiggled in her seat from embarrassment.
“I didn’t tell them anything, they were just here for dinner” Andy had whispered in her ears after they left, handing her the gift.

She learned her lesson the hard way. Her inpatient had her almost destroying her marriage.
“Everyone is waiting Gina,” Andy called. She circled to the front door and cracked it open. She meets Samira—the woman she once thought of as her co-wife, she held a wriggling young life in her arms.
“Where have you been, I think she wants to eat,” she said handing the baby to Gina. She took her from her and smiled, “Too bad she can’t even taste her one-year birthday cake.”

Alimatu Azungah is a Ghanaian writer. She writes romance, short stories, and flash fiction. She graduated from the University of Education, Winneba, Ghana, where she studied Special Education and minored in English language. The only time she forgot to eat is when she is writing or eating. She enjoys sign language and watching Kdrama.