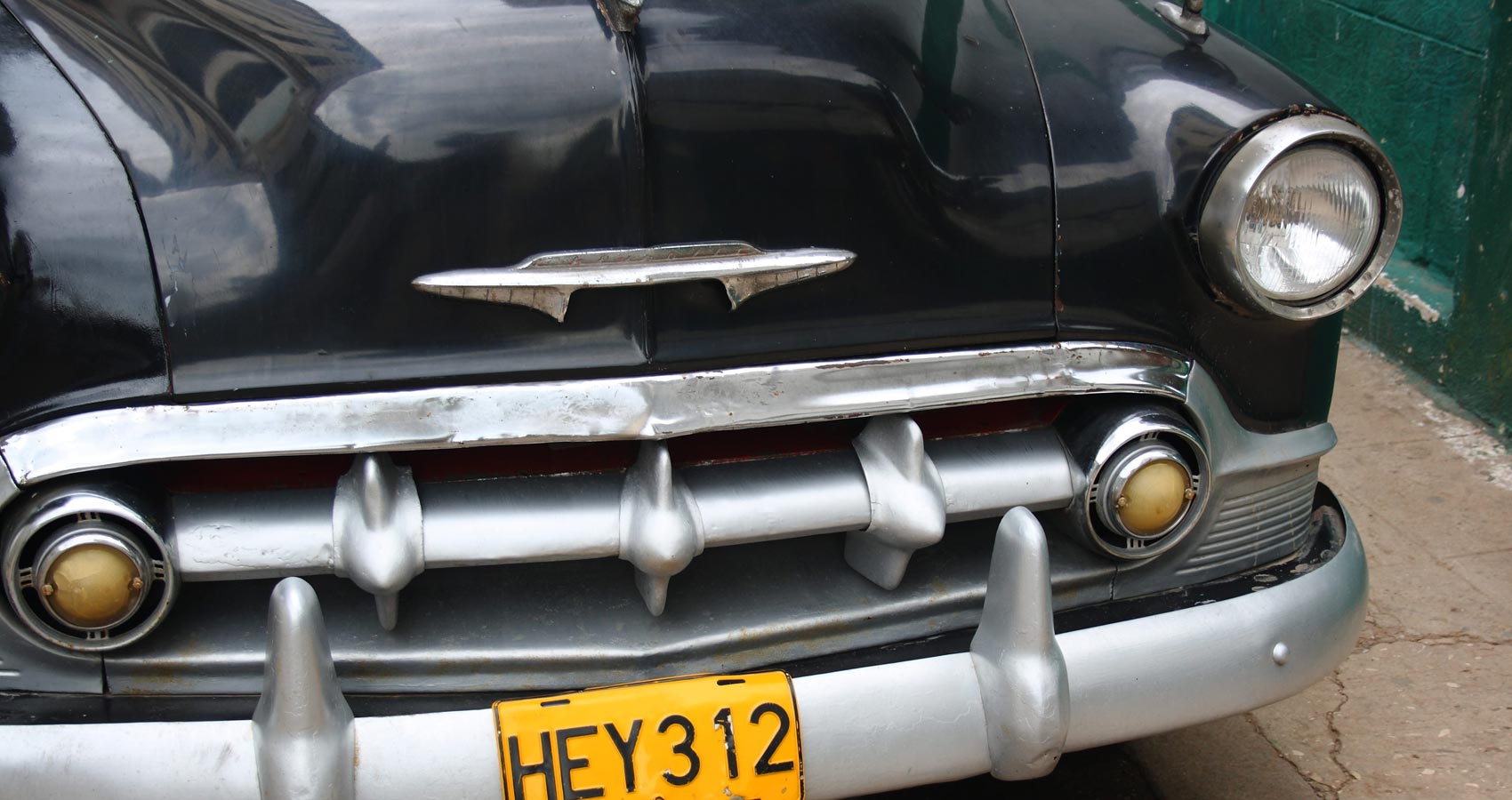 Virginia stood next to the new Chevy Coupe, black with chrome and a stainless-steel trim. She inhaled the night-time scent of jasmine growing on the trellis in front of their two-bedroom bungalow.

From the time Frank had gotten up that morning, he’d bragged about how much he wanted to know what its top speed might be on the open road, making her apprehensive about going on the trip. She knew her husband liked danger.

Virginia leaned into the backseat and made a bed for Emily, their five-year-old daughter, spread out a blue and white quilt tufted with red yarn, and plumped a pillow.

Frank passed her on his way to hang a five-gallon waterbag on the car’s grille. “Put on some weight. You’re too damn skinny,” he said.

“You should have married my sister Amelia. She’s fat.”

He took a toothpick out of his breast pocket. “I would have if you hadn’t come along.”

Virginia returned to the house to fetch Emily.

Emily crawled onto the backseat. Toying with the plastic arm of her doll, she asked, “Are we going to Aunt Ollie’s?”

The child narrowed her eyes. “I might fall into that hole. It smells.”

“The outhouse? You won’t fall in.”

“Your cousin does like dolls. She just likes trucks more.”

Emily turned her doll on its cloth sawdust-filled belly— it cooed, ‘mama.’

Every year, they traveled from Los Angeles to the San Joaquin Valley to visit Frank’s sister and her husband, Manuel. They lived on a small ranch: a few cows, a donkey, and some chickens. Their daughter, Bobbie, was the same age as Emily.

Chewing on the end of a toothpick, Frank got into the vehicle. He gripped the steering wheel and turned to Virginia, “Why such a face? You pissed off at something?”

“Why did you buy this car without talking to me first?”

“What the hell for? I don’t need your permission.”

A lump rose in Virginia’s throat. “I’m walking around with holes in my underwear. And I’m sick to death of begging you for money.”

“Nobody sees underwear.” He leaned in and started the car.

She silently gazed through the side window.

Emily pulled the homemade quilt over her face.

Looking over his shoulder, Frank backed out of the driveway.

The Tehachapi Mountains towered ahead. Tangled vines of wild grapes bordered forty miles of the steep grade of narrow canyon roads, known as the Grapevine.

Virginia clasped her hands together. “Please, God, keep us safe.”

“Hey, why don’t you pray to me. I’m the one driving,” Frank snickered. “Shit, it’s too damn dark.” He slowed the car to the twenty-mile speed limit and put his foot on the high-beam pedal. “You know what a buddy of mine said? He said he once saw a mountain lion in these hills.” He spat out the toothpick.

“In my purse.” She reached up, flipped on the dome light, fished out a pack of Dentyne, and gave a stick to Frank, then switched off the light.

Frank put his foot on the accelerator.

“Slow down.” Virginia pressed her feet onto the floorboard. “You’re going to kill us.”

“Scared?” He laughed and braked.

“Mother.” Emily cried out from the back seat. “My ears hurt.”

“She should stop calling you that…”

“Yeah, well, I’m her father, and she always calls me daddy.”

Winding trails smoothed into slight curves as the mountains gave way to foothills then met Highway 99. Miles of nothing other than the straight road ahead.

After leaving the Grapevine, Frank drove onto the lot of a Beacon filling station. It had two gasoline pumps—one with lead additive, ethyl.

The sound of tires crunching on gravel got the attention of an employee. Spattered in a grease-stained overall, he quickly emerged from a station house and came running.

Frank got out of the car, arched his back, and stretched. The thick scent of petrol hung in the air. “Fill it with ethyl. Don’t forget to wash the bugs off the windshield.”

“Sure is. Can’t wait to see how fast this baby can go.” He took a toothpick out of his shirt pocket and picked at his teeth.

“Be careful. A few miles up the road, a guy was killed racing.”

“No fooling… got a restroom around here?” Frank hacked and spat on the ground.

He hung onto the car door and popped his head inside, “Virgie, there’s crapper in the back.”

“Why do you have to use vulgar language?”

Virginia followed the sloped path to the toilet. When she reached it, she recoiled at the odor.

The attendant removed the nozzle at the car and glanced at Frank, “That’ll do it.”

“Anywhere a guy can get a hot cup of coffee around here?”

“Got some inside.” Gas dripped from the fuel spout as the attendant hooked it back onto the pump.

Again, back on the road. The auto bounced over ruts. Frank accelerated to forty. Shadows of trees disappeared. Fifty. Sixty. “Son-of-a-bitch, this Chevy can go.”

“For God’s sake,” Virginia said. “We have a child in the car.” She thought, I should have listened to my mother. She warned me not to marry him.

He barreled along a two-lane rural highway. When he spotted taillights ahead, Frank moved in, and for half a mile, he rode the car’s bumper. “I’ll show that Okie a thing or two.”

He moved onto the oncoming lane.

Fender to fender. Looking past Virginia, he yelled, “Get that piece of junk off the road.” He offered his middle finger.

The man pulled to the side.

Virginia’s heart sunk. She didn’t know if the guy was looking for a fight or just letting Frank pass. “Let’s go!”

“Okay, okay.” He slowed down and drove quietly for the next several miles.

Emily fell asleep again. Frank chewed on his toothpick, and Virginia, wishing she could be someplace else, stared out the window.

Pima cotton on both sides of the highway. Hot summers, not a better place to grow it than in the San Joaquin Valley. The German war prisoners, held in a camp nearby, worked in the fields.

Occasional refreshment stands in the shape of a giant orange. Its specialty was freshly squeezed juice over crushed ice. They were all closed until morning.

Frank glanced at Virginia, “Do you want to stop and pick some oranges? I have a couple of bags in the trunk.”

She rolled down the window and breathed in the fresh citrus fragrance.

Virginia knew they were nearing the ranch, so rousing Emily wasn’t a problem. She turned, reached over her seat, and gently shook her daughter.

Emily peeped through sleepy eyes. “Are we there yet?”

Frank pulled onto an incline and parked next to a twenty-foot-wide fiberglass orange stand.

Frank and Virginia scurried like mischievous thieves bathed in the moonlight while they picked oranges off the trees. Emily gathered them off the ground.

With two sacks filled, Virginia asked, “What time is it?’

Frank glanced at his wristwatch. “Half-past twelve. We’ll be there in about an hour.”

Emily didn’t return to the back seat. She sat between Frank and Virginia in the front.

Frank turned the key in the ignition.

“I like oranges.” Emily looked up at her mother.

Virginia glanced at Frank. “How can Ollie stand to live in Hanford? The water smells like rotten eggs.”

“They might. In the last letter I got, Ollie said they were thinking about selling the ranch.”

“Yes. And did you know the United States government produces plutonium in Hanford? Liquid waste leaches into the ground.”

“Probably why the water sinks.”

A train whistled in the distance.

He tightened his fingers on the steering wheel.

The Chevy Coupe sped toward the tracks.

Each whistle blew louder and longer.

His crazed eyes glanced at Virginia.

She glared back. Hatred and fear filled her.

Virginia was screaming. Emily was crying. Then everything stopped.

For hundreds of yards, the train dragged the car along tracks.

Among the twisted wreckage were two bags of mangled oranges that lay in pools of red-yellow juice and one little doll.