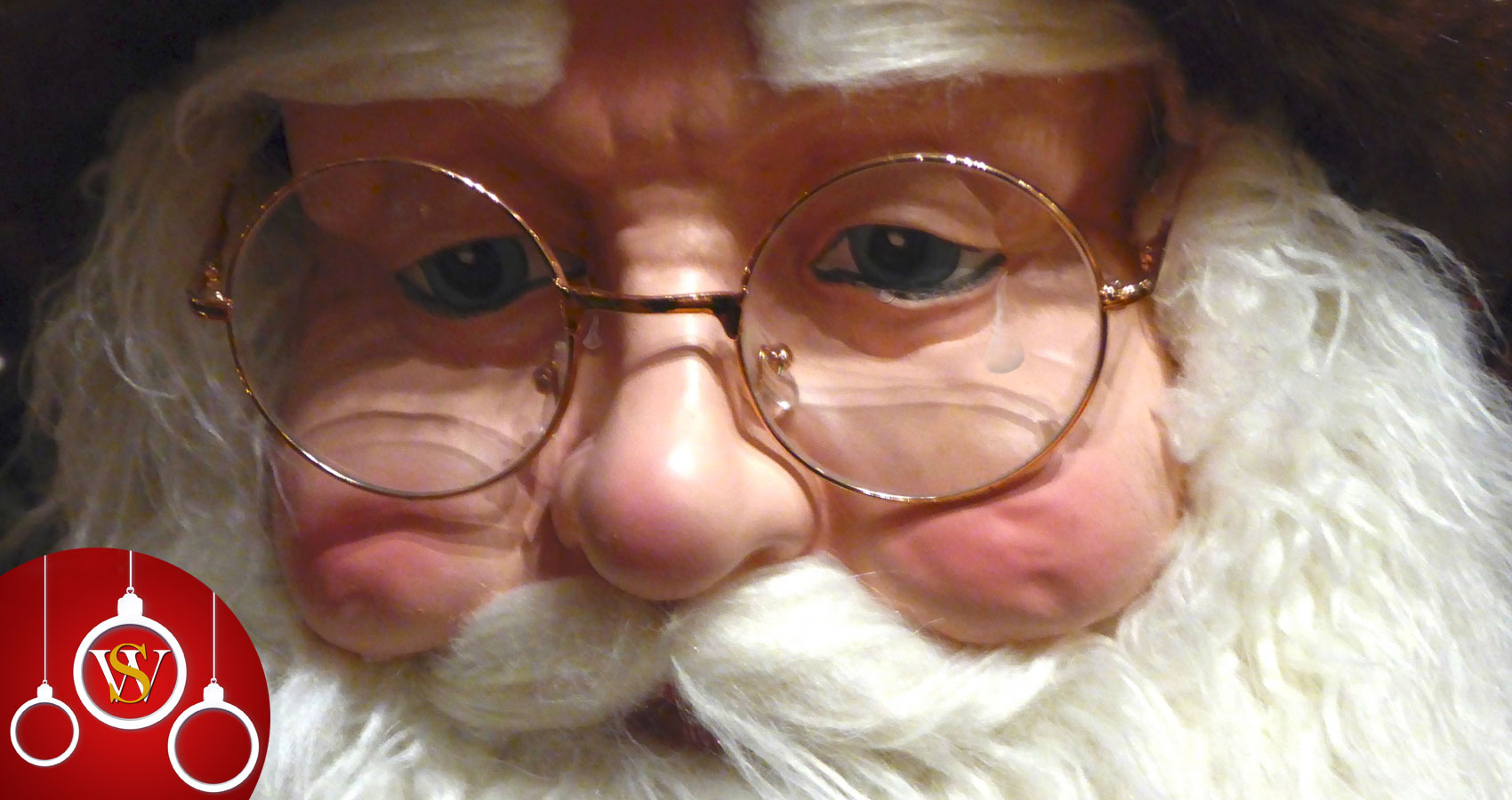 With unshed tears, his face clasped in chubby hands
Surrounded by kids from near and far flung lands
Morosely, sat Santa Claus, hunched against the cold.
The cold refused to be hunched against, growing bold.

Some wearing fur lined jackets, some under dressed
Some tiny tots with his awesome presence impressed.
The kids looked around sadly, to just one idea sold.
“I want a Kalashnikov”, pleaded a lanky, ten year old.

The sky appeared turbulent and ah, he felt benumbed.
His flamboyant spirits had to Stygian depths plumbed.
He sat surrounded by the stench of gunpowder smoke.
Overwhelmed by strong emotions, almost about to choke.

In a corner sat a five year old, looking like a lost case.
His shoe lace was untied, and there were tears on his face.
“What do you want as a gift, child?” asked Xmas Father.
Said the child, “I don’t want nothing, for my parents, rather.”

“Two negatives make a positive, child, “Said Xmas father.
“Sorry sir, I want nothing, but for my parents rather.”
With a sudden twinkle in his eyes, Santa looked at him.
The child did not smile, but continued to look grim.

“You know, I want to gift myself to my parents dear
For my safety who are always filled with utter fear.
So Santa Claus sir, could I get a bullet proof jacket?
Oh, does it lie hidden over there in that red packet?

“Please sir, I beseech you, please fulfill my dream.”
This five year old’s tears were an unstoppable stream.
“Stop, do not cry child”, he said with a reprimand mild.
With a loud groan, in his arms he scooped up the child.

As he tried to blink away his tears, the nightmare vanished.
The monsters from his mind were temporarily banished.
With a huge sigh of relief he picked up his bulging sack.
On his mission of spreading good cheer, he had to be back.

Vigorously rubbing away the sleep kinks from his eyes
The snowflakes from his clothes, and burying his sighs.
He started looking around for red-nosed Rudolph and sleigh.
He would soon be on his way, many monsters to slay.

He picked up his robe, decorated it with ivy and holly.
“Hello, here I come”, bellowed the fellow, feeling jolly.
The cheery, chubby, rubicund fellow, was on his way
With Rudolph, the red-nosed reindeer pulling the sleigh.

“Are you not being naive, father?” chirped a tiny magpie.
Sadly he looked at her, suppressing the incipient sigh.
Garrulous birds from different trees cheered him on.
Soon his dejection vanished, with the hint of a new dawn.

Strains of “Santa Claus is coming along riding on his sleigh”
Fell into his ears, gone was the nightmare of yesterday.
Resolutely, he hunched himself against the biting cold
With a merry ho ho ho, forward he rumbled and rolled.

He resolved, “with peace trinkets, I will fill all stockings
Maybe this will be helpful in tackling life’s knockings?”
With a merry ho ho, forward he rumbled and rolled
Flicking away the chilly winds, now feeling very bold.
.
“Merry Christmas, merry Christmas”, he greeted one and all.
To a little girl, he handed a doll which sang “peace to all”.
With one swish of the candy cane, the sheep came to his fold.
He hunched himself against the cold which felt no longer bold.