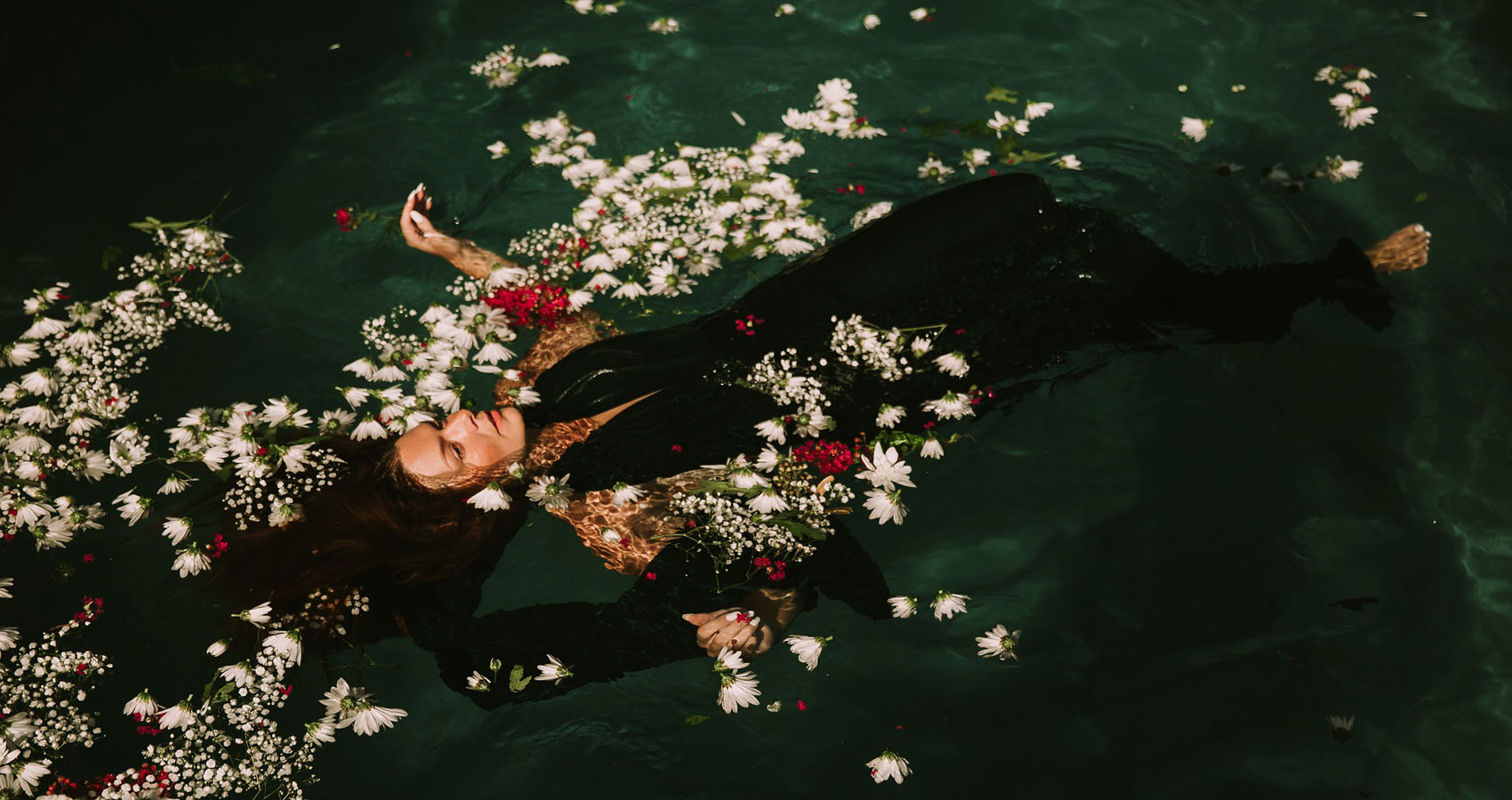 She swam on satin. Silken waters wrapped her over as she floated in the blue waters. Birds frolicked alongside. They kept her company in those laps, she made, one too many. Her thoughts were elsewhere. She swam out of depths into the thoughts. They kept coming back, braided in and out oscillated like waves. In a way impeded her swim. One too many, thoughts writ on water, ebbed and flowed. They haunted her. In the aftermath of the war, bodies floated down the river under the stringy bark.

They were in an oval room. Her mother sat next to her in a chair. They chatted, mother and daughter. Her mother looked fresh and young, in her teens.
She asked: ”Where have you been all this time?”
“I had been out to a conference,” mother said.
“How did it go? All good?” she asked.
“Ah! Very good. All was good.”
“But I missed you. I really did.”
Mother smiled at that. A very sweet young smile. Father came into the room too. His handsome face brightened up with a radiant smile, showing all of his beautiful sets of front teeth. Mother rose from her chair to ask him to sit down. But father sat in another chair opposite to her. Thoughts faded. The room became dark. A lorikeet flew directly at her. She thought, it was going to gouge her eyes. But the sprightly bird, rushed passed her flying low over water.

The neighbour who was like a father to her, came. She went to his funeral. He came to her. She asked him: “Have you seen God?”
“No, not yet. This, a silent place, where I’m, at the moment. This empty vastness, dark and hollow. I float here on air.”
“Oh really? No God then?”
“I don’t know where he is. He hasn’t come to meet me,” the neighbour said.
“Do you miss us?” she asked in tears.
“Yes, I miss your aunty.”
She saw him driving his car through the neighbourhood, with his wife sitting right beside him in the front whom he referred as aunty.

Mountain passes were rugged. She walked through the terrain alone. A storm picked up, she looked for shelter. She found a cave. In the dark cave, she sat alone. A lightening fell outside, showed a shadow on the wall. She was not alone; somebody there. In a bit, the shadow disappeared. It was creepy, and she was out of her wits. She tried to sleep. Just when she saw some cave paintings on the wall. She faced them, as she lay down on the hard cave floor. In the lightening, she saw stick figures. They were ancient, she imagined. No, she saw who cave-painted them. A little boy; he stood with a charcoal in his hand, drawing figures on the wall. He lit a small fire. Lights from the fire emanated to help him see better. He drew stick figures of many shapes. It was all mostly dark. Dark shape of a boy silhouetted in the moonlight. Floodgates of lights opened. The paintings were tales. They told tales, some washed up in the rain. Parts of the tales, like paintings of an alley on a rainy day. People walked through with missing hands or hair, or even defaced in the falling rain. Colours running down leaves of the trees turned them into lighter shades of green almost to white. Such were the paintings on the cave.
Gallows hung in a market place. Kings, commanded horrendous sacrifices of children for more fertility of the soil. These had to be little boys to be sacrificed at the bloody alter to appease the gods. Tales foretold the ominous comings of days. Kings men entered the cave, and took the boy, this artist away to the gallows. In a white loincloth wrapped around his waist, the boy’s look of gaping horror. She looked on in silence. Tears, and cries of the innocents couldn’t move heavens to repair the wounds.

A bystander from another reality, she saw wistful memories, played out retrospectively. Over swelling waves, she boarded a pirate ship. A war was imminent. On the horizon, a ship appeared like a phantom. A skeleton of a ship gilded in silver. There was a gunshot fire. She was hit. Oh! It hurt! She was hurt. She felt the pain of the gunshot. But she lived. She saw the ship pass by, while their ship sailed towards the nearest beach. On the beach, she saw sea-gulls, scouring the skies. The beach was the most wondrous place. They could do so many things here. They could shape and break a destiny. Build huge castles, and bury themselves in those places. Play kings and queens of greater imaginations. Make painstaking Mandela to kick it back to flatten into perfect smoothness. Wasn’t that the human history too? To create the laborious paths to immortality. Through the giant pyramids with care, and effort, or the Taj-Mahal. The great Ozymandias? The kings then disappeared one day, the works remained. In the sand, she drew up her feet, part sand, hybrid part flesh. Her feet made up of sand, up only to the waist. The rest was human. The beach played her imagination to do anything, really.
They never existed after a while. Thousands of years of decrepit palaces to show that they existed once. Such was the beach, where they played once, horses, unicorns, the romantics, and the warriors. A metaphor, this beach, and the sea of tireless time in which life existed only as time’s gift offerings at the altar of God.

She swam, a big hand bagged a snake. There was a man in her room, who said, he was leaving. And then he disappeared. He told her that he wanted to be born again.
“Born again?”she asked.
“Yes, that is possible.” he said.
“Impossible. Because in order for you to remain what you are, you need genes from both parents.”
“It is possible, though.” The man said.
“What about your wife?”
“What about her?”
“Does she have a say in any of this?” she asked.
“Probably not.”
The wife remained at large. But she didn’t say anything. She heard his expressive desire to leave, die and be reborn. She left it at that.
The night forest was illuminated by fireflies. The blue forest, brightened with sprinklings of lights strewn everywhere. Lights around tall trees and short dense bushes. The slim trunks of the trees shone in the light of the fireflies. He walked through such a forest. A silent forest, the conduit, then disappeared on the horizon. The man, who wanted to die, left, to be reborn.

There she was, this lady in white. She held some syringes in her hand. Her face was young and happy, her lips red with the betel juice. She stood in front of the bed and she said:
“You mother takes injections from these.”
“What?”
The lady disappeared. The fact that her mother ran out of insulin and it was no longer available where she lived. Her mother, who lived in another country, and the lady had come to tell her this. To ask her, if she could get her mother some insulin from this place. That was the reason why she had appeared. The lady was her grandmother who had passed away some years now. The silken water rolled over her bare silken skin. She continued to swim in her thoughts. He had come to say goodbye now. “I’ve come to say goodbye to you,” he smiled peacefully at her. She looked back not fully understanding what he had said. Then she realised that this man, her brother-in-law had too passed away.

It was all very mesmerising. The laps of thoughts, and the silken feel through which she swam in the bed of waters. She thought about these dreams, her dreams she has had over many years, each night. Dreams in her head, another reality into which she lived. She saw a different world. That she became resident in it. She slept through a very real world, which only upon wakefulness, she realised that she dreamt. Who’s to know that in wakefulness, this other life that we call a reality, was not another dream? Like that painting in the rain, defaced people walked the streets, and the greens washed off the leaves, as water dribbled; that too was a reality of the artist’s imagination. A random reality looked through coloured glasses of smoke-screens.