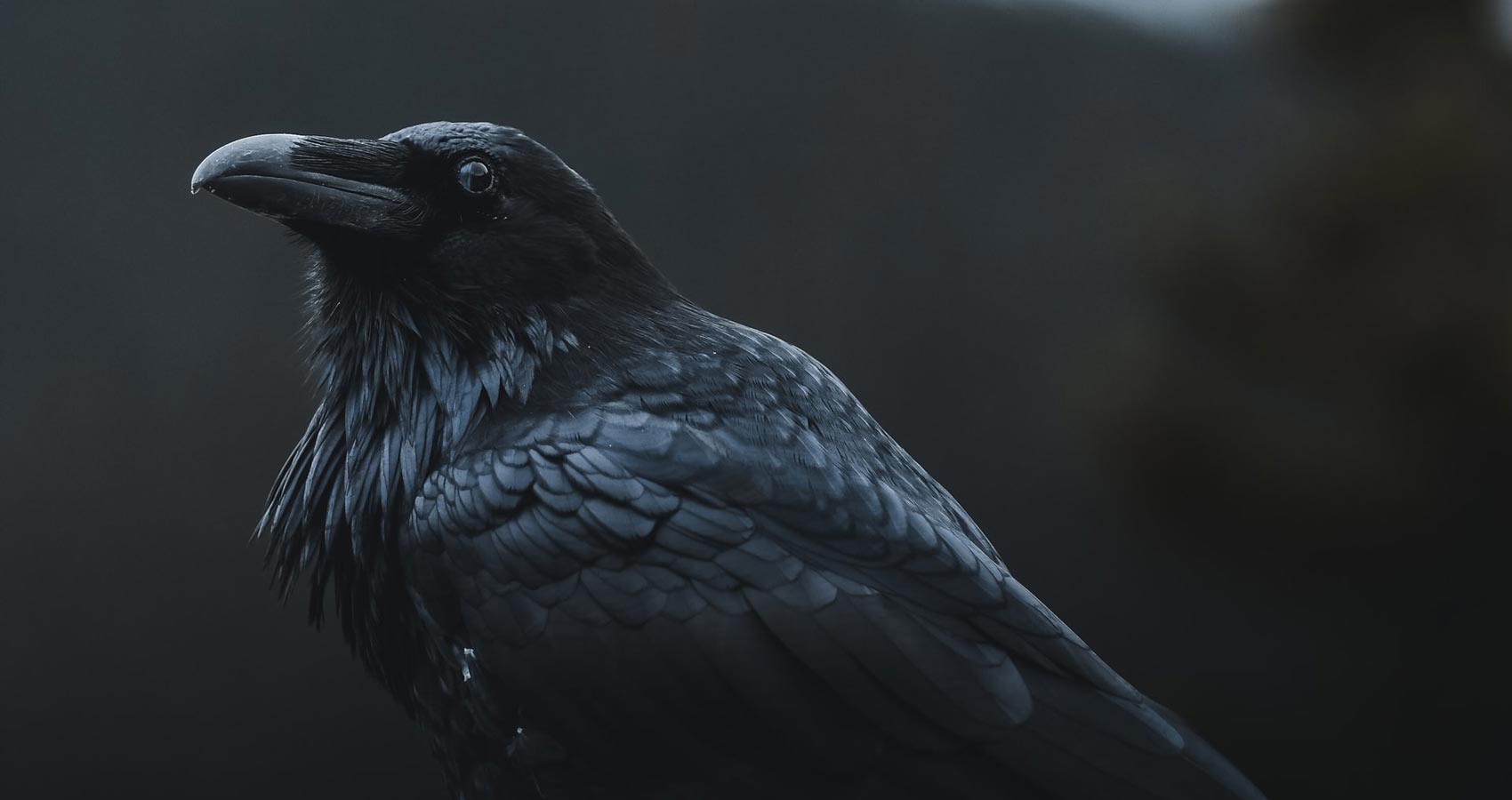 The snow has started falling,
‘Tis falling o’er mountain and plain,
The trees bend under their burden,
Shake free, and are draped again.

Lines like these stay with you forever. I was chanting, ‘Shake free, and are draped again’ like a mantra. Shaking free, to be draped again, what else?
I did not go out for many days. It was extremely cold outside. When I did go out, I wore a bamboo basket on my head and walked like a tortoise. When I carried firewood, the basket would lie on top of them. One day after finishing up all my work, I made tea for myself and sat at the entrance of the monastery.
There was a birch tree in the front yard. In Sanskrit, a birch tree was called Poorja. These trees surrounded the monastery. Their bark was white in color. In the old days, they were used for writing. The trees had shed their leaves and stood with their bare branches. A few leaves were left on this one. A crow was sitting on a branch.
At first, she did not look like a crow. I had to look closely. She had her neck drawn in, beak pointing up, body in a heap. She had fluffed up her body in order not to freeze in the cold. Why hadn’t she migrated?
I thought she was waiting for me. To fulfill her duty. Suddenly my mental strain gave way to a laugh. What dutifulness!
I stepped down and walked toward her. She fluttered her wings at my sight and raised. Since her wings were drenched heavily with snow she could not fly and fell in the yard.
I carried her into the monastery and placed her in front of the fireplace. She recovered quickly. I offered her some wheat grains in a bowl. She strutted toward it and pecked the grains. She turned her head and looked at me with her confused eyes.
I removed my shirt and knelt before her to offer myself for her pecking. She kept turning her head rapidly. I turned my movements into a kind of dance. Fluttering her wings, the crow suddenly flew toward me and pecked. But the pecking felt only like a soft touch.
She pecked me again. Just like a kiss. I understood that she only pretended. I too pretended to be afraid of her pecking. We both celebrated that play. After so many days, I laughed hard and jumped up in the air.
The crow stayed with me the whole winter. She would eat wheat grains twice a day; would go into dark corners of the monastery and hunt rats; would sleep near the fireplace, her wings closed, beak drawn in. She’d wake up hearing my footsteps, greet me with a soft caw, and go back to sleep again.
Occasionally she’d remember to peck me. Though she’d come at me at a faster pace, the beak would touch me only softly. We acted out this play throughout the winter. She left me once the winter was over.
The snow melted on the mountains barring their peaks. The light in the sky was blinding. People returned. With them the sheep and the yaks. Thousands of swallows after them. Grass raised on the ground. Fresh leaves sprouted on the branches of bare trees. Hundreds of colors in those leaves! They continue to change every day. Insects buzzed day and night. The earth had resurrected herself once again.
I was going to get yak’s milk from the nearby village. I did not carry an umbrella. I wore only thin clothing. Suddenly a crow attacked me. But I did not get the usual shock. In fact, I experienced a pleasant feeling. I got used to their pecking now. The crow too was only kissing me.
Two more crows came and pecked me playfully. We were dancing that joyful dance. They flew and sat around me cawing. I looked at their eyes. I knew the crows had pardoned me.
From then on, crows did the pecking only as a play, a pretense. I went to Vidisha. From there I came to Guntur. At every place, this act of play occurred once every month. The crows would cry when I walked. When I signaled to them that I was ready, they’d come and play with me.
“When I took sannyasa, Mahaseko gave me the name Asita. He said the old Asita got his enlightenment from a crow,” said Asita.
We were under strange emotions hearing that incredible story. Asita said, “What is art? Only a pretense, right? Nothing is real in art. A shadow dog won’t bite. But you can play with him.”
Swami Chidananda, who sat across, said, “Absolutely. Even renunciation is a pretense of life in another form.” He went to light another bidi at the stove where tea boiled.
Nithya concluded by saying, “I asked Asita what would a crow say to a sage who has no obligation towards his ancestors? He laughed and said that it’d say, ‘I am not their ancestor. But they believe in it, so I pretend.’

B. Jeyamohan (b. 1962) is a Tamil writer and literary critic based in Nagercoil, India. One of India's finest authors writing today, he has traveled the length and breadth of the Indian subcontinent, and his work examines and reinterprets India’s rich literary and classical traditions. His best-known, critically acclaimed novel, Vishnupuram (1997), is an epic fantasy that layers history, myth-making, and philosophy. His works of fiction include the novels: Pin Thodarum Nizhalin Kural (1999), Kaadu (2003), Kottravai (2005), and Vellai Yaanai (2013), and explore diverse themes ranging from ideological anguish following the collapse of Soviet Russia to the symbol of the mother goddess in Tamil cultural history to the great famine of Madras in 1876-78. A prolific writer, his output includes multiple novels, short stories, volumes of literary criticism, writer biographies, introductory texts to Indian and Western literature, books on philosophy, and numerous other translations and collections. He has completed his serialized retelling of the Indian epic Mahabharata called Venmurasu (The White Drum), consisting of twenty-six volumes. This is the longest novel in the world and certainly the longest in Tamil.

Latest posts by B. Jeyamohan (see all)