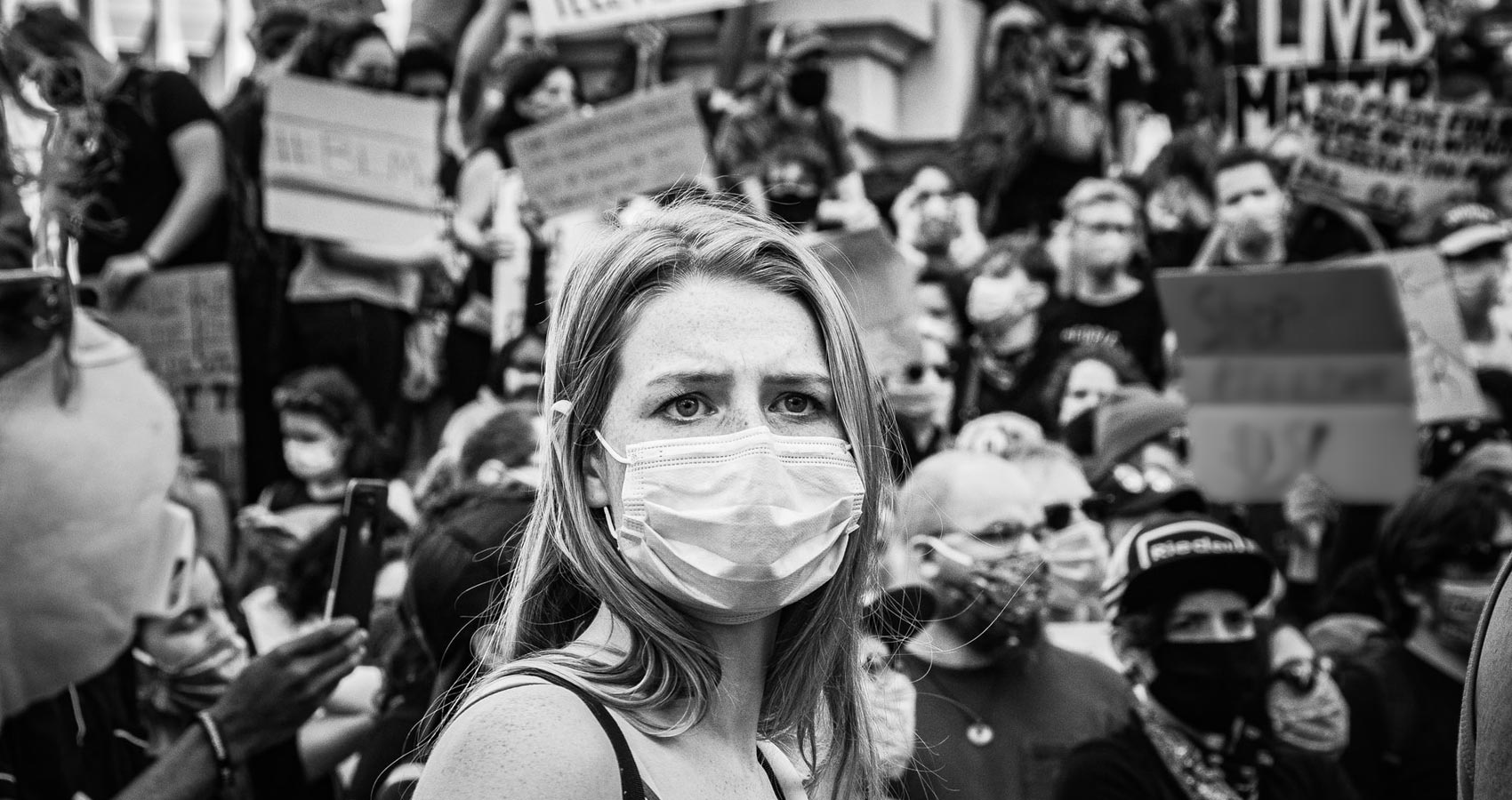 The azure filling Inmaculada’s hotel room’s window was a stained-glass roof through which radiance rushed to glitter greenery. Her legs, swinging off her bed, curved into hips that curved into a flat stomach above which sprung roundness.

Her locks disappeared under a shower cap. Tumbling water felt like adoration. She recalled an ex-boyfriend’s analysis: “You’re an evolutionary masterpiece.”

The others would be waiting in the breakfast room. She never waited for anyone. Why should she wait for anyone?

Her especially made red T-shirt had written upon it: Dignifying salaries for dignifying jobs. Her red baseball cap held up her hair, female napes evergreen in beauty’s panorama. Her clutching jeans advertised perfection. A whistle touched that roundness. The yellow band holding up the whistle sat on red, Spain’s colours implying patriotism.

She removed her cap in the breakfast room, a premeditated follicle collapse revealing an eye-catching mane that shivered men’s hearts.

The fried eggs complimented her entourage’s red T-shirts and the yellow band around Inmaculada’s neck from which hung a yellow, plastic trumpet that was designed to attract attention.

Smiles with nods, difficult not sleeping well in four-star hotels when you don’t have to work. The only thing stopping sleep, apart from sex, had been the thrill of witnessing “history.” Inmaculada had rolled around in bed, excited by the day’s potential for inflating self-esteem. Life meant inflating self-esteem.

Big tables were engulfed by red-T-shirted people; some women wearing lilac were lesbians, their association’s name on their T-shirts. Why lesbianism’s revelation was necessary when demonstrating against government cuts in expenditure wasn’t examined; but Inmaculada still smiled at “those sisters in arms.” Smiling at gay people meant open-mindedness.

The demonstration began beside their hotel. Booking that hotel had excited Inmaculada, for that hotel was the action’s hub.

A beggar’s uncombed, black curls in front of the hotel were tinted premature grey, his anxious irises beaming like disturbed lights. He peered around warily. Smiling demonstrators ignored him as they passed by.

A photographer captured the beggar’s plight amid protester gaiety. Smiling people wandered past the beggar whose mouth shivered because of some unconscious fear, his empty cup raised. Having been consistently beaten up by his mother as a child had made fear his prevailing emotion. His tanned skin almost looked black, his feverish, dark irises highlighted by the stark whites of his eyes, his hair knotted.

The one person who should be protesting, the photographer thought, is “working.”

Inmaculada passed the beggar, saying: “We have to solve problems here first.”

Her serious face had cemented into a bust of noble thought. A debate had erupted at breakfast. A man attending a conference on international cooperation had said: “Third-world economies need to be improved to create export markets for developed countries to stop recession.”

“There isn’t time for that,” she had said. “We have to solve problems here first by getting politicians to act within the law.”

She plucked rosy comments from her bouquet of phrases.

“Okay,” the man said, “sure; but we need to create conditions that’ll pay for government expenditure–the sort of expenditure you want.”

“How’s that going to help people who’ve lost their jobs and flats?”

You lost your flat if you couldn’t pay the mortgage. Spain had been unique in that respect.

“You mean they signed contracts after being lied to?”

“I think you might find they understood the contracts; but what alternative was there if you wanted to own a flat? Politicians didn’t allow alternatives to keep their banker friends happy.”

“The alternative was not to sign and to complain.”

“The alternative is to pressure banks to sell the properties they’ve acquired for nothing and to use the money to pay off mortgages.”

“We wouldn’t be able to rely on you to help. You’d probably be in Somalia.”

Only well-off people could afford to be at this demonstration that revered a consumer system abused by politicians and not abused enough by the demonstrators.

Red flags held by red T-shirted people wafted before a bearded, stone classical figure that controlled a carriage being pulled by stone lions. That figure’s nobility reflected the surrounding “nobility”, the photographer thinking: They’ve spent loads getting here from all over the country to increase self-perception and spending power.

He remembered as a child seeing nearly two million people marching through Melbourne against the Vietnam War. There was no smiling in that demonstration; just anger and violence.

Inmaculada’s lips spread like joyous ripples across her face as she blew on her plastic trumpet. Every smiling face Inmaculada saw–strange when frustration was supposed to be rife–emphasised her worth.

“Yesterday,” she said, “I saw a crying beggar being ignored. I couldn’t believe the indifference. Absolutely no solidarity. I felt disgusted.”

When the photographer saw Inmaculada he thought: Perfect.

Inmaculada exuded grave determination when the photographer walked backwards in front of her, while taking pictures, her placard espousing: Take from the rich. Not the poor.

Her face and placard dominated the next day’s front pages.

The messages she received from men she was cock-teasing included: “The Joan of Arc of Now.” “No other woman compares with you.” “The only thing matching your beauty is your conscience.” She had told all these men how “nice” they were.

Then came: “Your pretentious solidarity is only matched by your cock-teasing cruelty.”

She stared out a window. Her heart beat faster. Throbbing pounded in her temples. She rubbed her forehead, soothing a tightening brow.

Her photograph on a newspaper’s front cover lay before her. Now she couldn’t look at it. Only moments before it had looked wonderful. She turned it over and stared out the window, thinking: Look what he’s done to women!

The justification fightback had begun. Although she didn’t care what he had done to women, she used his “immorality” as the excuse needed to reignite the oven of her perennial probity, irrelevant that that man didn’t believe that he was morally perfect.

She put the photograph on Facebook, that strange, highly unusual sensation of potential imperfection now repressed.

Women, she thought, are so vulnerable.