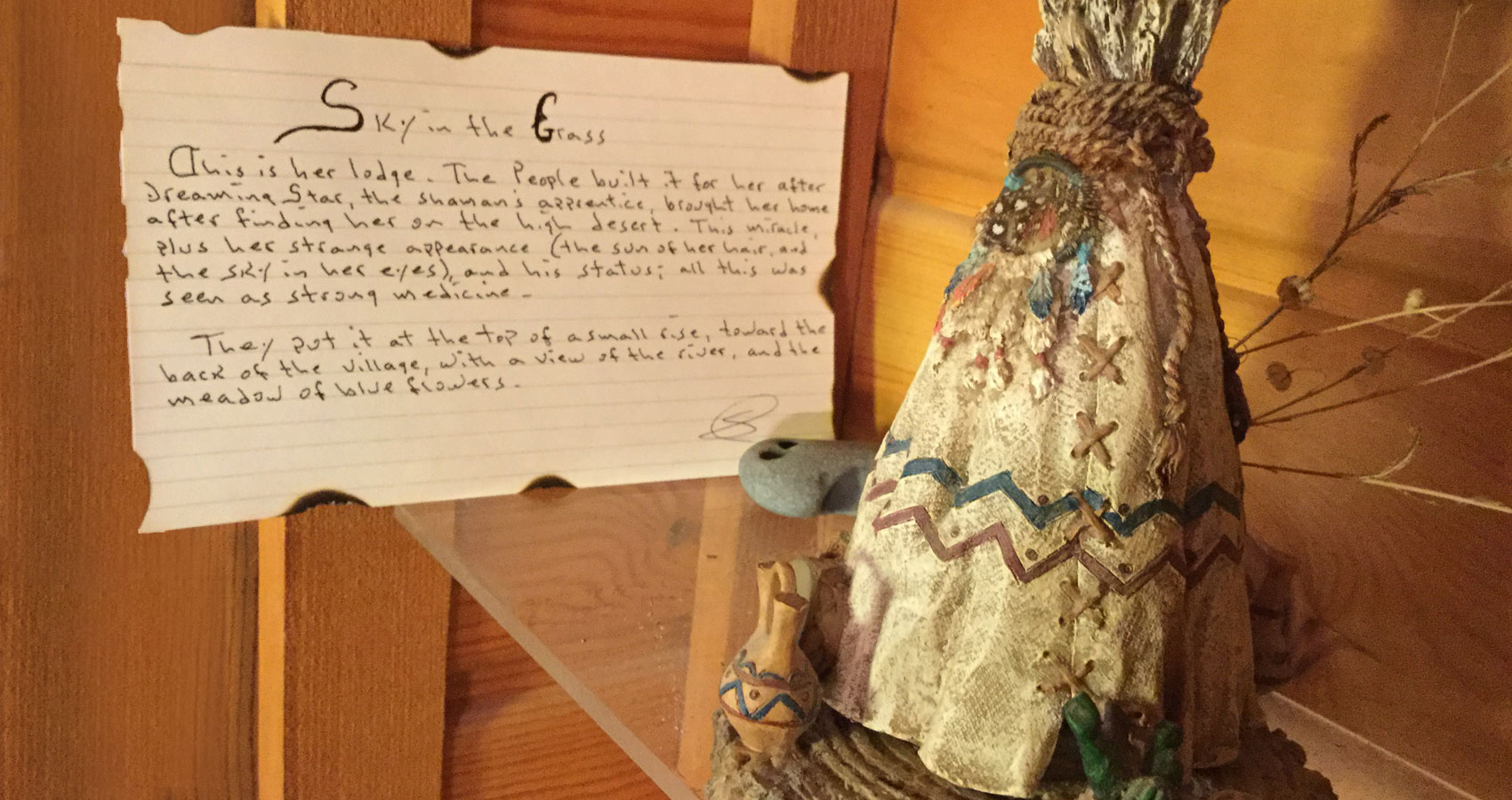 Sky in the Grass

Sky in the Grass

Five hundred years ago, in what is now northeastern California, there lived a small tribe at the edge of a forest of lodge pole pine, beside a river.

In the meadow where their horses fed, there grew thousands of sky-blue flowers. Every spring they grew, and spread, and bloomed.

One morning, the old shaman stood at the meadow’s edge, watching the children running through the flowers, happily scattering the horses. His name was Singing Hawk, and he knew that soon he would transition to the Great Lodge. He felt someone approach, and the old man smiled. Without turning, he called, “Morning, Dreaming Star.”
“Morning, father.” Dreaming Star carried the same power as Singing Hawk, even stronger. Singing Hawk knew he would be a fine shaman.

The younger man placed a hand on his teacher’s shoulder. Just then, a group of women walked into the flower field to collect seeds for making oil. As always, he had eyes for but one of them.

Her name was Sky in the Grass. She’d been with the People a little over sixty suns. Dreaming Star gave her the name the day he found her on the high desert, her family lying slaughtered by a warring tribe. Her hair was light, like the sun, and her eyes were blue, like the sky. And since the first time he heard her say his name, she owned his heart.

But in her mourning, Sky in the Grass walked within unseen walls; she let no one get too close, especially Dreaming Star, whose love she feared was true.

When Singing Hawk died, Dreaming Star did become shaman. One night, his thoughts filled with Sky in the Grass, he fell asleep, and was visited by Singing Hawk. In his vision, they sat with a fire between them. “Father, I scarcely know her, but Sky in the Grass authors all my mornings. How can I win her trust?”

From behind the fire’s glow, Singing Hawk said, “Son, Sky in the Grass knows you care, but she mourns her family, and her skies will be dark for some time. But listen: In the morning, go to the blue meadow, dig up a plant, pot it, and take it to her. If, after thirty suns, she tells you she planted it, then you’ll know you have won her trust.”

And so, next morning, he chose a plant with many blooms, growing beside a tall stalk of grass. He dug it up, put it in a pot, and brought it to her.

“Is this for me?”
“Yes. I know how you like them.” She accepted it from him, careful not to touch his hand. As always, the presence of her sweet, open face, took away his power of speech. So he smiled at her, and walked away.

Thirty suns later, in the early light, he saw her stretching outside her lodge.
“Morning, Sky.”
“Morning, Star.” Then they fell silent, and he turned to go. He took a few steps, then Dreaming Star heard the sweetest words ever spoken to him:

“I planted the wildflowers you gave me.”

NOTE FROM THE AUTHOR:
The legend of Sky in the Grass came to me the morning after my asking this question in meditation:  “How can I win her trust?”

Just a man from northern California, living on a beautiful acre of high desert I call Goose Ridge.