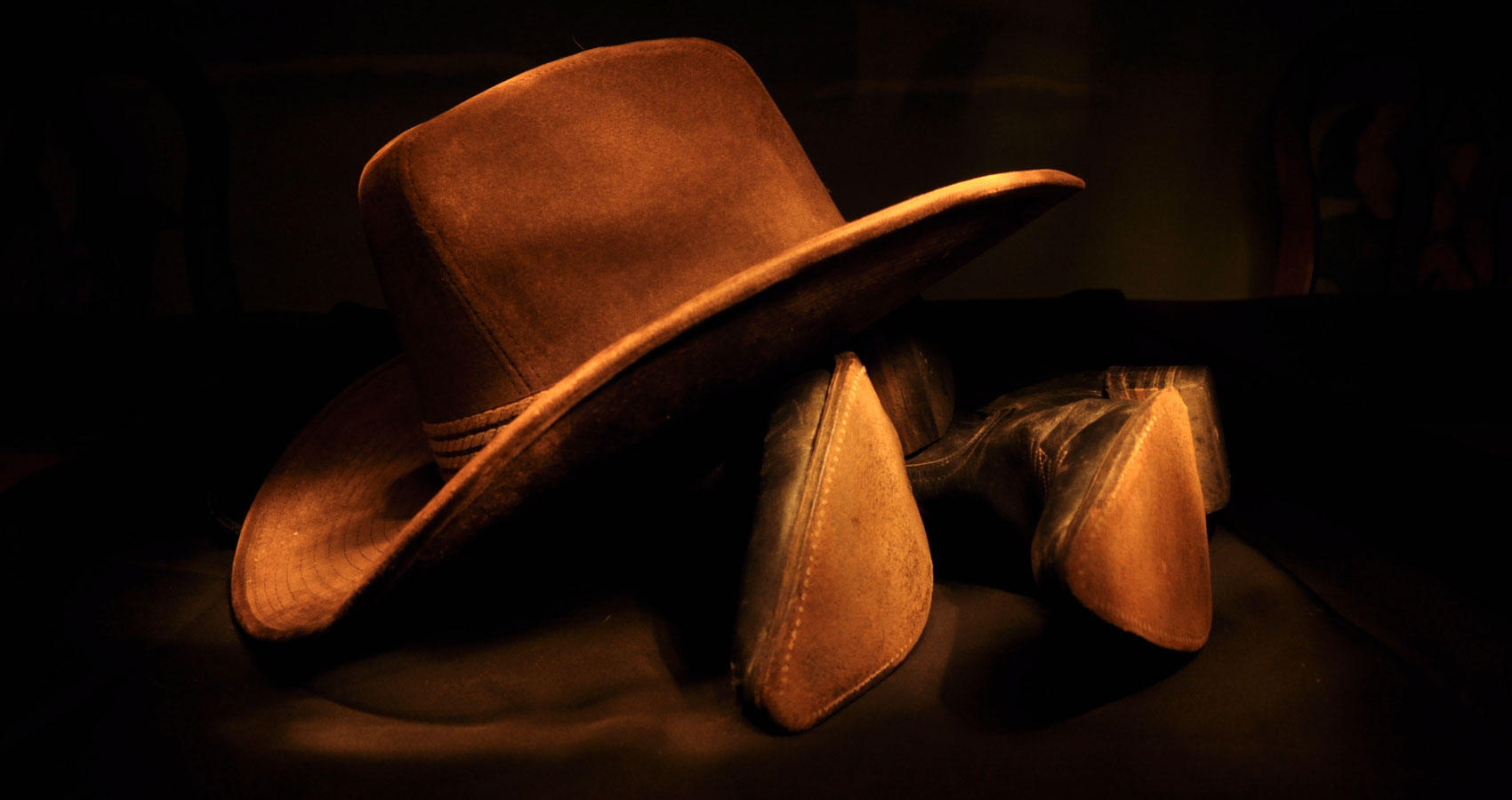 Do not forsake me though I’m scowlin’,
I’ve practised my Clint Eastwood pout,
When they see me guys throw the towel in,
That I’m a tough guy there’s no doubt.
For I’m the bravest Texas Ranger,
Tin star, two fingers make my Colt,
When I roll in grunt “Howdy stranger,”
I’ll lay bets on by my Stetson,
When I draw I’ll see you bolt!
Just like a rattler filled with venom,
Always the quickest on the draw,
A snake belt holding up my denim,
“Stick ‘em up!” you know the score.
Yes I’m a rootin’ tootin’ cowdy,
In every Speakeasy, saloon,
I’m rough and ready, mean and rowdy,
Meet on the street with me, High Noon.
Do not forsake me o my darling’
I’m just a sucker for your dart,
Your arrow’s got me and I’m falling,
And love has struck me in the heart.
I’ll sling my guns from Dodge to Deadwood,
At the corral I’ll be o.k,
My brim is broad, my eyes are shaded,
And though I swagger and I sway ~
Please don’t forsake me o my darlin’
As a gunfighter I’m the best,
And you know that for all my snarlin’
I’ll love you from High Noon to midnight,
For I’m the wildest in the West.

It has been a pleasure and a privilege to write the poems, which will accompany the drawings of Graham Ibbeson in this collection to acknowledge his 70th birthday. I have grown up alongside Graham, being fortunate enough to be his cousin, friend and, more importantly, as far as the development of his work and aspects of this preface are concerned; his “playmate.” That we were children, who spent our youth in the heydays of the 50’s, 60’s and 70’s, has not only influenced our attitudes, but also the content of our respective creative process.

When Harold Macmillan declared in 1957, that the British Public had “never had it so good,” he was referencing a period in British Post – War history, which introduced, additionally in the UK a rise in national optimism. Advances in technology after the war saw an increase in personal autonomy. A new wave of individualism and aspiration had been born. For a start, the practice of mass inoculation revolutionised medicine and increased life expectancy and quality as many diseases, previously deemed fatal, came under the control of mass vaccination. Gaining momentum from the first diphtheria vaccinations in the nineteen forties and the newly created NHS in 1948, there followed innoculation programmes for polio, MMR, BCG and Smallpox, which rolled out across the next three decades. Smallpox being eradicated globally in 1978.
In addition, private bathing facilities and bathrooms, family telephones, televisions and automobiles, which once had been afforded by the well to do, became available to all. Increases in mass production, which had become necessary to support the war effort, meant an increased exposure to beneficial technology for everybody. The increasing affluence of the working-classes allowed them to escape their downtrodden, class ridden image, and aspire, in the way of their American counterparts, to a better life. A plethora of working-class artists showed their capability, becoming the “Working-Class Heroes,” of a new creative generation. The Beatles, Hockney, The Liverpool Poets and the Angry Young Playwrights of the sixties, some without the conventional University Education, were produced in this ferment of upward mobility. A new style was born, Carnaby Street brought new influences into fashion and new buildings such as the Gibberd designed Liverpool Metropolitan Cathedral completed in 1967 and the Coventry Cathedral, consecrated in 1962 complete with its Epstein sculpture, became symbolic of a national pride resurrecting from the ashes of a destructive war.

For two little working-class boys growing up in this milieu, the sky seemed to be the limit. In 1961, when Yuri Gagarin made the first orbit of the planet and in 1969, when Aldrin and Armstrong walked upon the moon, what had been the stuff of childhood fantasy, suddenly entered the realms of the possible. It is hardly surprising, then, that much of Graham’s work is a paean to such optimism and yet it also contains a certain wistfulness, a lament for lost naivety and innocent belief. Despite this, such naivety is not wholly rooted in childhood, but also focuses on the credulity in pipe – dreams, that were once the aspirations of the working-class. Graham, with integrity, has honoured his roots in the many civic sculptures he has produced of working people. Depicting their triumph over adversity.
The attitude of Graham’s personal work, as opposed to the large body of civic work he has undertaken, is able to gestalt for the observer a nostalgic era of change. The “land of milk and honey,” becomes not only possible, but also desirable. His iconography distils time and emotion and brings to life, such motifs as the tin bath, (symbolic of his mining heritage), the snake belt, (a common prized possession of 50’s and 60’s children), the “tin” sheriff’s star, (redolent of an innocent era of “cowboys and Indians”) of childrens’ games of the period. His boy sculptures have partings and short back and sides hairstyles, the girls the braids and plaits of the era, harking back to a longed for, simpler time, a time of romance, a time when heroes and heroines were well defined and identifiable just like the period from which they came.

The Romanticism in Graham’s art cannot be ignored. The primacy of the individual is celebrated in his image of childhood and the “dream days,” of imaginative play. An old doggerel comes to mind, of the “what are little boys made of?..” genre. Many of Graham’s portrayals of children have a pugilistic, or militaristic attitude, for the boys, definitely a “rats and snails and puppy dog’s tails,” inference. The girl images however, are different, they show a more sensible sensitivity, they are often portrayed as leaders, queens, ministers or judges, more stable, the givers into society, rather than the conquerors of it. It is interesting to note that he has endowed many of his female images with wings, they have become angels, they are “sugar and spice,” and able, with their down to earth attitudes, to rise above the “airy fairy” exploits of their male counterparts. This is not “pie in the sky,” it reflects Graham’s genuine faith in the self – belief of the self-made man or woman. It appreciates the value of possibility.
It is no mistake that the artist often refers to the fantastical, the world of animation and cartoon, its belief in the impossible becoming possible. Popeye, Laurel and Hardy, The Bash Street Kids, Superman and Batman have all been sources of inspiration. Such characters give us a flavour of what our dreams may be. They shine a beam of hope into a mundane world. Neither does ii come as any surprise, that much of Graham’s Civic work has been commissioned to represent persons from the world of entertainment in all its forms. As an artist, he champions that which would “take us out of ourselves,” that we may transcend both with laughter and with pathos, the merely commonplace.
Finally, I come to that point, to which a close observation of the work has led me. Although much of the imagery is (Quasi Modo), seeming approximately to represent the almost, or superhuman, it also, in its execution gives a nod to that style which is Neo Classicism and is evidenced in the amount of detail and “tongue in cheek” realism with which Graham imbues his characters. The casual viewer is thrown into a quandary, enabled to ask him/herself is this image real, or unreal.
For me, that lends the work a peculiar, Metaphysical quality. Although at first reading, the poems may seem to have a certain incongruity with the imagery, it is this, engendered by my own deeper observation of the work, which has inspired me. Throughout, Graham has said that his own work and mine should “remain alone,” I am grateful that he has not tried to influence me in any way. The result is a juxtaposition of styles that in their amalgamation, creates something new and separate, a third art form, so to speak. Graham’s images force many questions that we ask both of ourselves and the world we inhabit. I have questioned Graham’s work with my own and the result is the book. The world is presented by both artist and poet in a way that shows at the same time both its hope and impossibility. It brings together the feasible and absurd. In the way of all good art, we hope it is unsettling enough to make us question our cherished notions and beliefs.

Samples from book: “High Noon to Midnight,” generated from an exhibition of sculpture and drawings by sculptor Graham Ibbeson and poetry with performance by Paul Thwaites.