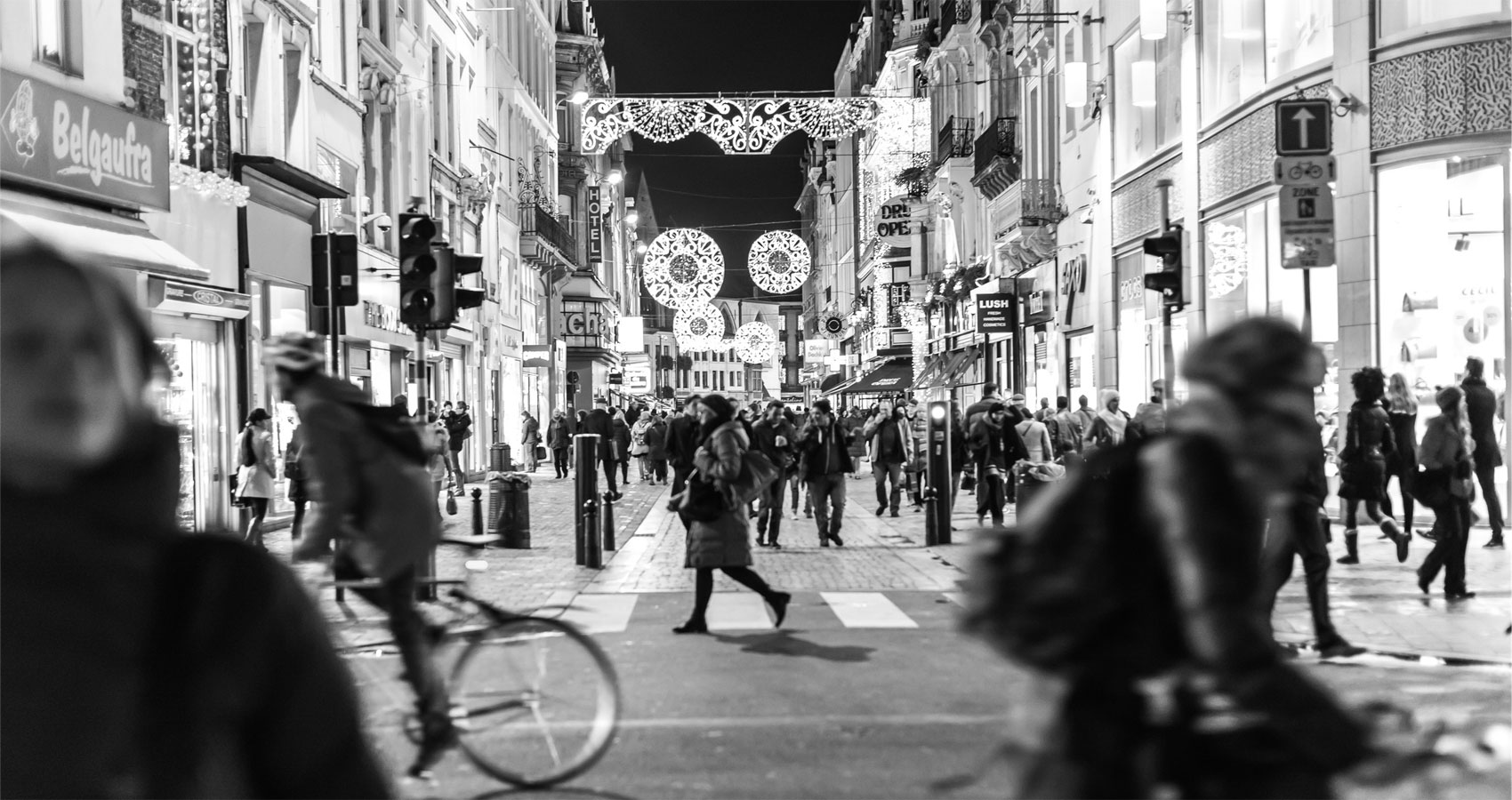 The Angel In The City

The Angel In The City

The mist dried in the air while the concrete and pavement in the city below stayed damp and cool. Car horns honk at one another and pedestrians as the metro rail clank and rap with the heavy wheels of the evening trains. The sun may be down but the streets and sidewalks are well lit as the evening life begins as couples and groups of friends wander the concrete maze in search of entertainment. While the nightlife warmed up, in a little corner bar that was only big enough to sit five grown men, a bartender watched the TV as his only patron sat drinking a mug of beer slowly. The man drinking the beer wore an old looking coat that was slightly humped in the back, his hair was short and light in color, overall he looked fit and healthy. On the TV the news was playing a story about conflict on the other side of the world where thousands have died and little to no aid and care was given.
The bartender shook his head with his arms crossed and muttered comments about how sickening the way people treat each other now and wished there were more God and less Devil in the world. The man sitting at the bar paused in mid-sip and slowly lowered his mug of beer listening as the bartender continued his soft rant, to most people they would smile and nod at what the man was saying but the Bar’s only customer listened to every word the bartender said and slowly nodded. The customer wished the bartender a good evening, paid for his drink and left the establishment. Shortly after the only customer left his bar, the bartender suddenly noted that he did not remember the guy coming into the bar in the first place. This guest to this city was not mortal; he is an angel.
On this rare occasion, he has the ability to come to Earth and walk among Humans and just observe, his only curse is that he can only return at night which was something he learned to enjoy, he can blend in easier. As the Angel walked down the sidewalk past partially inebriated college students and casual evening diners still dressed from the office. Some people bumped the Angel as they rush or stagger into him, some apologized and carried on while some pretended they never collided with him. Soon the smell of something delicious caught the senses of the Angel and attracted him to a food vendor. The Angel picked out a treat for himself to enjoy next to the garbage can where he threw away the paper the snack was wrapped in. Walking away the Angel could not help but notice a homeless man rummaging in a garbage can on the other side of the street and looked back at the people enjoying their food and ignoring the obviously hungry man. The Angel continued his trek down the sidewalk until he was about to pass a church, looking up at the steeple he saw the cross and bowed his head before continuing past the holy ground.

Not far past the church the Angel was stopped by multiple flashing lights from Police cars and an Ambulance that came to the front of a bar where a young man was bleeding from his head and another shirtless man was taken away in handcuffs, no doubt this altercation was fueled by alcohol and the presence of scantily clad young women that these two men felt they had to resort to their primal Neanderthalic behaviors to impress a potential companion for the evening. Slowly shaking his head the Angel continued around the corner where he noticed a streetlight was out, looking up where the amber glow should be coming from he reached over and placed his hand on the pole the light is connected to and with his power he restored light to the lamp, pleased with his work, he crossed the street. As the Angel approached the other side, he was met with images of war, famine, corruption, politics and other flashing images as he happened to come to the front of the TV store with the display TVs in the window showing the news.
In one part of this city, there was a shooting, then a robbery where a clerk was beaten. In another country, a terrorist blew up a bus, while another country was suffering from financial collapse. All the photographs and moving images were almost too much to take at once for the Angel that he reached his limit and turned and walked briskly away from the lights and commotion of the lively city nightlife. He found himself next to some run down apartments where there was a somewhat rundown playground where a boy was sitting on a swing set with a blood-soaked dishtowel over his mouth. The Angel sat on the swing next to the child and noticed the lack of tears that a child should cry if they got a bloody lip, it was clear this was not the first time the child got an injury like this.
The Angel looked to the apartment buildings and back to the boy, “Your Father?” he asked meaning who gave the boy that bloody lip.
The boy shook his head and lowered the towel, “Mom’s boyfriend.”
The Angel nodded and with his feet in the gravel he gently pushed himself back and forth on the swing, the chain squeaking, echoing in the partially empty lot, “So no Father?”
“He left when I was little, just me and mom but now she has a boyfriend.” The boy explained.
“He does that often?” the Angel pointed to the boy’s lip.
“Not really.” The boy shrugged, “Other times when he’s mad he uses his belt on me or puts his cigarette out on the bottom of my foot.” The boy held up his barefoot that showed the scars from past punishments.
The Angel lowered his head, “I’m sorry for your torment.”
“Mister?” the boy started with curiosity and a little anger in his voice. “Why do bad things happen to good people?”
The Angel looked to the streetlight lit skies and thought about it for a second before looking back at the boy, “Bad things happen to good people because it’s a reminder to other good people that they should help each other and pity those who suffer so. The more people ignore others, the more bad things happen till finally, a better person grows impatient with other good people and changes that. So I guess you can say those bad things happen to good people so other good people get angry enough to stop bad things.”
“And prevent them?” the boy asked.
“And to prevent them.” The Angel nodded as he smiled and stood up, “What’s your name child?”
“Michael sir.” The boy smiled behind the washcloth.
“I had a Brother named Michael once.” The Angel nodded.
“Was he good?” the boy asked.
“Depends on who you ask but in this case to you, he’s good but when he and I meet, we fight.” The Angel smiled and began to walk away.
“Wait!” the boy called, “What’s your name?”
The Angel stopped and turned, “Lucifer.” He said with a smile and a wave as he left the lot.
The hour was drawing near and he would have to go back and wait years to return to another Earth in another Time. This night he saw the innocent and wicked the world has to offer. The sun was about to break the horizon and he was now no longer visible to anyone in this world as he let his leathery wings out from his coat before descending to his realm and vanishing for another set of years leaving the city to awaken and never knowing the Devil walked among it.