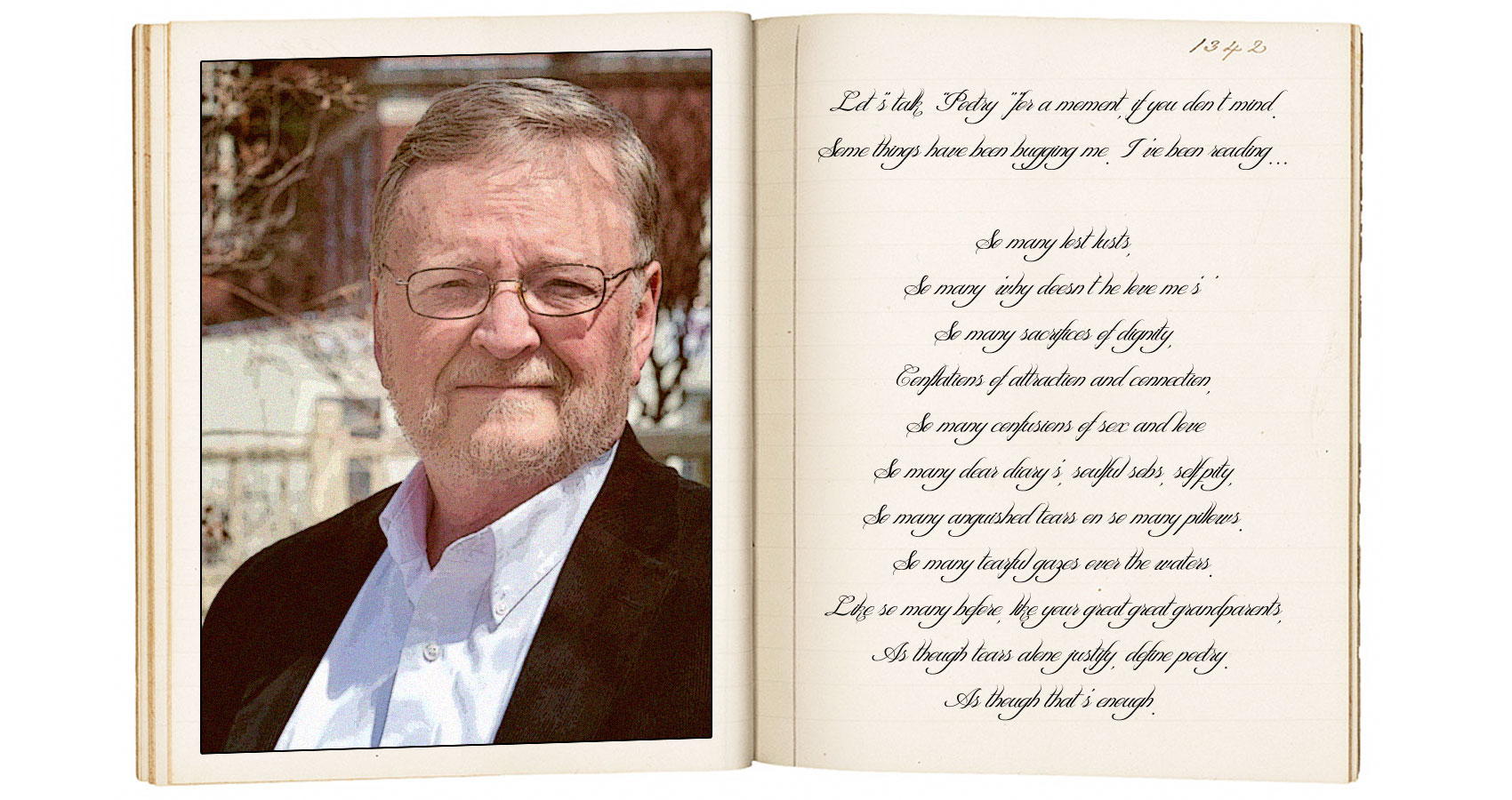 What It Is Not

What It Is Not

Let’s talk “Poetry” for a moment, if you don’t mind.
Some things have been bugging me. I’ve been reading…

So many lost lusts,
So many ‘why doesn’t he love me’s’
So many sacrifices of dignity,
Conflations of attraction and connection,
So many confusions of sex and love
So many dear diary’s, soulful sobs, self-pity,
So many anguished tears on so many pillows.
So many tearful gazes over the waters,
Like so many before, like your great-great-grandparents,
As though tears alone justify, define poetry.
As though that’s enough.

So many odes to aimlessness,
So much self-indulgence,
So much teenager-like angst,
So many assumptions that
The most common feelings in the
History of the planet… the galaxy, maybe…
Are at all insightful, fresh, helpful.

I’m sorry for your pain.
I am. It’s real.
But you’ll also have more. Lots more.
And you will survive.
Because you’re tougher than you know.
Welcome it. Use it.
Grow from it.

My right leg hurts. Nothing new there.
I need coffee, soulful kisses, and more…so much more….
I’m getting old and that pisses me off.
I’ve loved deeply and lost, have known death,
You will do both, maybe already have.
I’ve held my babies, watched them grow,
I’ve seen mothers loose theirs.
We win and we lose, sometimes more loss than gain.
I’ve been around the track more than once, but in the end
It, writing, boils down to answering this question:
So what?
That’s the question I put to us all.
So fucking what? Everyone has a sad story.
Answer “so what” and make me care. That’s the job. That’s what I want.
That’s the reason for poetry.

I want more than the lazy, the easy; more than the ordinary,
I want more than common oatmeal,
(With or without raisins and sprinkles).
I want to know how those oats grew, and where,
What they felt when they were harvested,
I want to know if they screamed, or just magically
Floated into your bowl, mere reflections of your sadness.
I want to see why I should care about your oatmeal,
It isn’t all about you, but about all of us,
And whether you can see beyond.
I want you to show what’s beyond the
Rustling of your jimmies, beyond being sexy,
Beyond, beyond, beyond.
Jesus H.! I want you to stop settling for less.
Less than you can do. Less than you will do.
I want you to get knocked down, get up, and get to work
To show what it meant. Show me: So what?

There’s no time to waste, you know,
Youth is wasted on the young,
Which I know now, and pass it along.
Maybe you’ll listen, but if you’re like I was,
You won’t get it and will go on
Thinking the world is here just for you,
Thinking that mere deep feeling is enough.
I have a newsflash from the other side, y’all:
It’s not enough. Not by a country mile.
(And stop rolling your eyes).

But most of all, right now,
I want coffee.
And kisses.
And depth.
And more.
So much more.