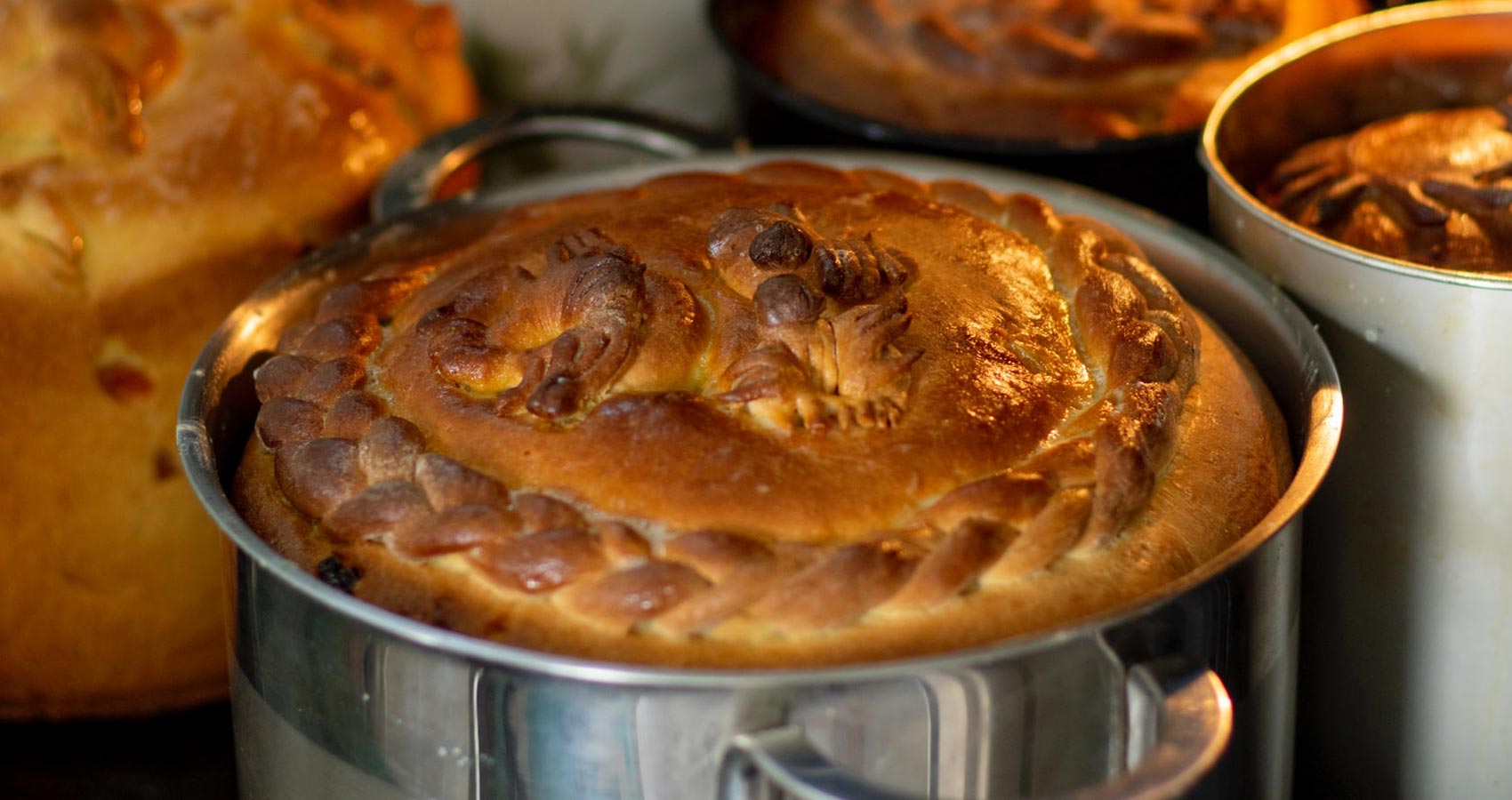 Will We Have Paska

Will We Have Paska

The aroma in the kitchen was of favorite foods in the Cevhski family. Vyktor stirred his secret ingredient into his homemade borscht while his wife, Tatiana, removed a pan of garlic donuts from the oven.
The month of March was at hand. Winter would soon break its grip and Spring would come forth with freshness and welcome by many.
However, a different Cloud hovered as Putin and the Kremlin were talking about taking military action that would hand Ukrainians certain devastation. Few were fearful though, and went on with life as if…
“Are Valentina and Serhei joining us for lunch?” Vyktor asked, a light tap to his wife’s backside.
“I think you want Valentina to have lunch with you, only.”
“She is stunning, one has to admit. Remember that I’m the most loyal, devoted husband this side of Poland,” Vyktor raised his hand to salute Tatiana, while she moved to symbolize one playing tiny violins.
“By the way,” Tatiana began, “I cured your snoring with those nostril strips. Now, I have to get you in the habit of taking care of that irksome beard,” she said, smile wide.
“Just mind your own business, my dear Tatiana. You have enough worries of your own, or too much time on your hands.”

“Serhei, Valentina, welcome! How was the hour-long drive?” Vyktor asked.
“To a large degree unreal; few people are on the roads today,” Serhei said, removing his shoes at the entry.
“We went to the market yesterday, and it seemed busier than usual. By time we left, the shelves had snack foods, sodas, and plenty of vodka,” Valentina added. Valentina removed her windbreaker revealing bright-colored sweater with matching blue jeans.
“You think we are in trouble?” Valentina asked.
“As long as there is Vladimir Putin, we are in for trouble,” Vyktor said.
“Smells good, what’s for lunch?” Serhei asked.
“All your favorites, son, borscht, paska and garlic donuts,” Tatiana said.
“Garlic donuts, a good go with for sure,” Valentina added. The foursome took their places at the table once the borscht was dished up from the kitchen counter.
During the prayer, the group heard a sound like thunder in the distance.
“That’s odd. Can there be thunder when the temperature is barely zero Celsius?” Valentina asked.

A minute passed before a second rumble was heard from the opposite direction.
“Check your android and see if there is news about something happening,” Serhei said.
“You can; didn’t you bring yours in?” Valentina stated.
“No, left it home, in the bedroom.”
Tatiana was the first to check her mobile device. Her expression turned ashen when reading,
Gun fire reported within 16 km of the Ukraine’s capital.
“Why that dirty son of a pup,” Vyktor said, pounding his fist on the tabletop.
“We better finish eating and head to the basement and make a plan. We can use that for temporary shelter,” he said.
The meal finished in silence, dishes rinsed and placed in the dishwasher for later. Would later even occur?
“Our bird,” Valentina exclaimed, “He’s all alone.”
“My award ceremony was scheduled for this evening. What the…” Serhei wondered aloud.
He was being awarded honors by their community for promoting efforts to improve recycling by its citizens and officials.
“I hope my cousins in Hungary and Belarus will be okay,” Tatiana said, tears in the corners of her eyes.
“Isn’t Uncle Petra being treated for cancer?” Serhei asked.
“Cancer is in remission for now. Aunt Sylvia, his wife, has had to take on extra work to support them,” Vyktor said, adding, “I don’t think Hungary will be part of Putin’s schema.”
As the foursome settled in the basement, the muffle of a couple motor vehicles was heard from the outside. The basement was newly finished and well insulated to keep out unwanted noise. Puzzles adorned the walls, most were nature scenes, which were assembled by Vyktor and Tatiana as a hobby.
“Would anyone like a drink?” Vyktor asked, he walked toward the liquor cabinet.
He mixed a bourbon and water for himself, a glass of Rozay for the others.

The sound of distant, muffled booms became more frequent in occurrence as the foursome played pinochle, a card game, to assuage collective anxiety.
“I’m going to put on the news channel. Need to know what the hell is happening around here,” Vyktor said, stern expression. The others nonverbally conveyed agreement.
The TV commentator appeared alert, serious expression, casual profile as she reported,
“Russian troops are said to be stationed within 20 km of the capital city, Kiev. Reports of gunfire were confirmed, but as to casualties and other details, these are spotty,” the commentator said.
“It is recommended citizens shelter in place, ready provisions for yourself and family; foreign visitors urged to leave the country immediately.”
“What do we do now and later on?” Valentina asked.
“Stay here with us. We can get out sleeping bags, too. Fortunately, the freezer is in the garage and has enough food to carry us for up to two weeks,” Tatiana stated.
Beads of sweat formed on Serhei’s brow. He was anxious by nature, and this would be a challenge to beat all. He had not lived through prolonged unpredictability before in his life. Tatiana knew how to help quell apprehensive moments that left Serhei notably disquieted. She recalled his science project from the seventh-grade display in the school gym. He learned from that experience that recognized effort from observers surpassed the need for an undertaking to be perfect.

The next morning, Tatiana made four bowls of oatmeal for breakfast. They sat around an oak table on round stools that Vyktor had purchased at a rummage sale.
“I think we should attempt to go to Korczowa in Poland. According to an online map, it’s about an eight-hour drive from here.”
“Where can we fuel up?” Serhei asked.
“Here, and hopefully on the way if necessary,” Vyktor said.
“Can we go get…” Valentina began.
“No, the bird is on its own,” Serhei stated, raised voice.
Before noon, the foursome were on the road. Suitcases and a crate of bottled water and food stuff were tucked in the back of their SUV. Many cars shared the same roadway but traffic had been moving along steady towards the Ukrainian border.
“Just about nine p.m. Let’s see if we can stay at this church for now. The lights are still on,” Tatiana said.
“Hello folks. I am the Priest here and you may occupy some designated space in our multipurpose room. This has proved adequate thus far,” he said.
“May we bring in our goods?” Serhei asked.
“Just yourselves. We have gowns, disposable wipes, and sandwiches to sustain you. Do you have any contacts in Poland?”
“No, just God and each other, and you of course,” Vyktor said.
The church facilities appeared modern, clean, sufficient for hosting temporary occasions like sanctuary for fatigued, impatient people. Length of stay was still a consideration by church administration. To allow guests One full day seemed insensitive but one month seemed arbitrary to the others who have faced dire straits from life being upended.

Four days after the family had pulled into the church lot in Korczowa, Vyktor received a text message. It spoke of Aunt Sylvia being hospitalized for a heart condition. She had been flown to Vienna, and requested a visit by Vyktor and Tatiana.
“Mom, Dad, you go. Valentina and I will ride things out here,” Serhei said.
“We are family. If one goes, do we all not go?” Valentina pressed.
“The voucher referenced is for only two, me and Tatiana,” Vyktor said.
“My point exactly,” Serhei said.
The associate director for community service overheard their conversation. He had been folding fresh, laundered table cloths nearby. He approached Vyktor, Tatiana, Valentina and Serhei saying,
“I apologize for overhearing your talk. I may allow a voucher for two more people to go to Vienna. We work with the International charities. It would free up space here for four others.”
Tears filled Vyktor’s eyes at this pronouncement. He was normally a just-the-facts kind of person.
“I am deeply touched. If your offer is genuine, our answer is yes, send us.”
The foursome boarded a flight the next day. Each were quite thankful for the good grace demonstrated by International Charities. Vyktor, Tatiana, Serhei and Valentina were met by relatives when they landed in Vienna. Sylvia was overcome as they entered her hospital room.
“This is a true family reunion,” she exclaimed and added, “Life is our shared gift between us! I am so happy you are here!”
Tears of joy shared an extraordinary moment in spite of shared international uncertainties and tensions.