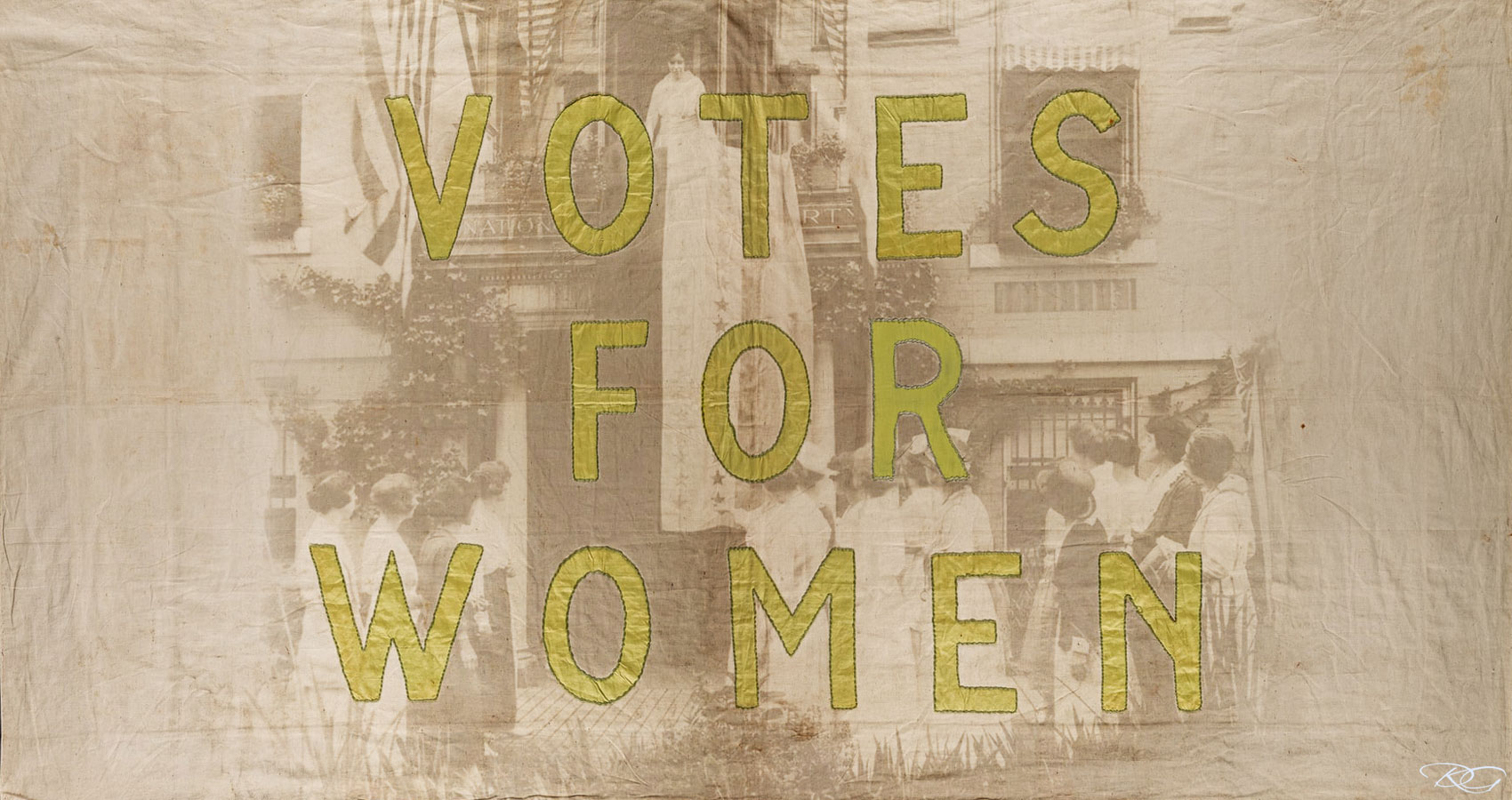 A ray of sun strikes the copper’s badge and bounces off, lighting up the voting box inside H. L. Drugstore in me South Bronx neighborhood.
Now washed and mended, I wear the same once-blood-splattered and mud-stained dress, patched at the cuff, tattered ‘round the collar. It shows the scars from when we marched down Broadway, I holding a sign, The Vote For Equal Pay For Equal Work.
It had started a glorious spring day, fresh from a night of rain, splendid with the radiance of blooming cherry blossoms. Little sister Annie pestered to come along. I told her, “Stay home with the youngins. You’re too small and there might be trouble.” She says, “I’m big enough and I’m a comin. So there.” And so, she did, running along the sidewalk, keeping step with the march. Annie inherited the stubbornness that we McPhersons shared.
Hundreds marched. Me arms feeling the ache from holding the poster high above me head. Women clutched banners that stretched the avenue. Coppers on horseback, coppers on foot, looking for agitation—someone stirrin’ the pot.
It did me heart good to protest among me own, knowing our numbers was a force to reckon with. Still an’ all, we had to keep going, every day, every spare moment spent on the vote.
A man outside Woolworth’s shouted, “Only vote I give you is a kick in the knickers.” Someone threw a rock. Glass shattered. Horses reared. Men broke through the lines. Big oaf of a bloke grabbed me sign, slammed it hard on me head, he did. I fell to the ground. “Lucy!” Annie’s voice had the shock in it. I sprawled in the street until I forced meself up. I looked ‘round for me hat. I got to me feet and when I did something hit the back of me neck, and I tumbled. Slumped on Broadway, staring at the buildings, the raging men, determined women, the world and all its unfairness swirling then dimmed.
Sirens, distant on the rim of me twilight, wailed, coming as a call to get meself up. On hands and knees, I was, when a copper kicked me in the chest. With great pain, I grabbed his ankle and raked short broken nails into his flesh. He shrieked. I rolled a ways over. Stood. For the sake of me sisters, I held up me fists like Jack Dempsey, but before I could sock ‘em in the kisser two other coppers pulled at me shoulders, squeezed meaty hands around me breasts. I kicked. Sunk me teeth into their fingers. Their red Irish faces flushed with the memory of booze, their breath foul as the steerage our family sailed in across the sea.
They threw me into the paddy.
Father brought us here after mum died, for a new start, a better life. Working in a factory twelve hours a day, no windows, low pay, bosses forcing themselves on me. If I’d a had no father or brothers, I might a hated all men. But I and me family could eat. Back home, how can you march with an empty belly? So, I wrap hopes and dreams and those of me family in the red, white, and blue.
From inside the paddy, I looked over me shoulder for Annie. The riot swallowed her whole. “Lucy!” But I heard her voice shrill as a whistlin’ tea kettle.
Across the aisle from where I was sittin’ a woman with a gash on her cheek bled something fierce. I ripped off me sleeve, dropped to me knees, and pressed it against the stunned woman’s cheek. Through her tears, I saw eyes that kindled rebellion. The woman beside her began to sing, “Let Us All Speak Our Minds.” The others, meself included, joined in the anthem. A copper in the front of the paddy banged his billy club on the grill and yelled, “Shut-up!” With no mind to the brute, we continued to sing. Louder. On the floor, a poster encouraged us with the words, Never Give Up. Our voices united, overpowered our fears, until he unlocked the gate and struck the nearest woman with his wooden stick.
Annie appeared, her thin arms waving as she ran alongside the wagon. I yelled through the bars, “Go home.” I, the eldest of six to me parents’ brood, demanded a say in their raising and sending me brothers off to war.
Head aching, chest hurting, hair falling ‘round me shoulders, me hat trampled somewhere in the fight. To jail I’d go. A criminal. A dangerous woman. I smiled at the notion and the girl who held me cuff to her head nodded as if reading me mind.
The wagon’s siren split traffic with a blaring fright as we drove down Broadway and turned a corner. The Harlem River glimpsed between outdoor markets, shops, and eateries. Fear starting to get the best ‘o me.
The jail full of suffragettes, it had nowhere to lock us up. So, they let us go.
A year passed since the brawl as I wait to vote. I look into the face of the women around me. Pride. A quiet jubilance. The change in our lives happening in this tiny drab storefront.
I think of the women who fought before us not having the chance to live this day. Do they know? I reckon they do.
I want to believe in something bigger now. That brotherhood will find the compassion to form a union for all of mankind.
I’m next.
A copper stands beside the ballot box, protecting the case with a scowl and a gun on his hip.
He motions me forward.
I keep me head high as I stride to the glass box. I write me vote in big letters and slip the paper into the slat as if planting something that one day will bloom.
I thank the good Lord for this day. Knowing that so shall life get better for me, it will get better for all.